Epson likes to call its latest range of Expression multifunction ‘Small-in-One’ to indicate their small size, and the Epson Expression XP-405 is certainly a compact device. It’s a budget printer, aimed at the home market, but still offers print, copy and scan functions and includes support for photo uploading and printing, something Epson has traditionally been good at.

In a good old shiny black case, the Epson Expression XP-405 has a nicely textured lid to its scanner, which also has a convenient lip at the front to open it with. Paper loads into a near vertical tray at the rear, in traditional Epson style, and feeds to a slide-out output tray with a flip-over paper stop at the front. There’s no separate photo tray, but you can feed photo paper via the main tray.

The control panel folds up to around 45 degrees and contains a 63mm LCD screen, coupled to a touch panel with 11 buttons for menu navigation and to start and stop scan, copy and photo print tasks. To the left of the control panel is a single slot for SD and MemoryStick cards, but there’s no front panel USB or PictBridge socket. 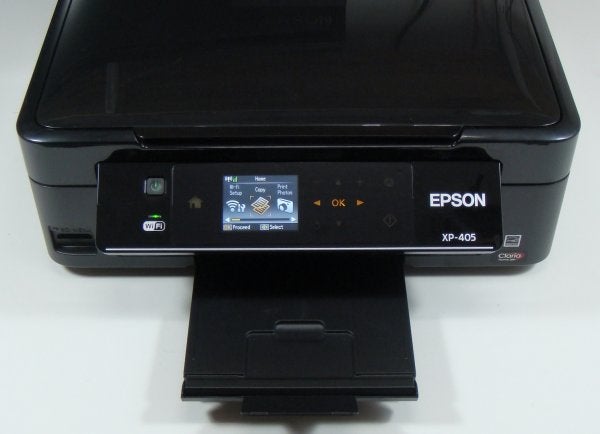 At the back is a single USB port, but the majority of purchasers will use wireless connection, because of the greater versatility this offers. The wireless link enables direct print from mobile devices, including AirPrint support for iOS phones and tablets, such as the iPhone 5 and iPad mini, several Android utilities and remote Internet print via Epson Connect. 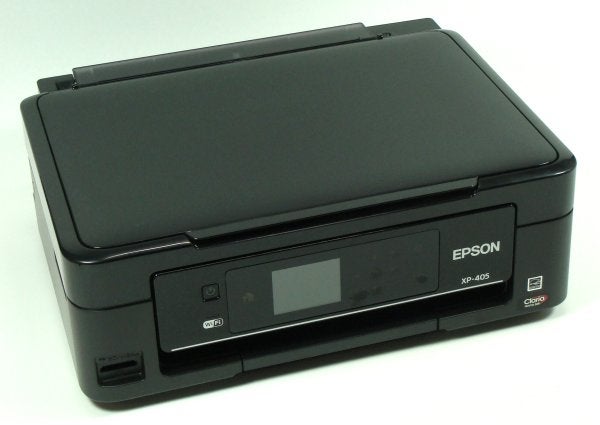 Hinge the scanner section of the Epson Expression Home XP-405 up and you can get at the four, separate ink cartridges, available in two capacities, which clip simply into the permanent printhead.

Software includes ABBYY FineReader Sprint 9 OCR and Epson’s own Easy Photo Print, as well as drivers and downloadable apps. Unlike so many new printers we test, the setup utility doesn’t download completely new ‘updates’ as soon as it’s run, which is a plus.

Epson still quotes some silly print speeds for the Expression Home XP-405, but it also quotes ISO speeds, which are far more realistic. Perhaps they’ve listened to our constant complaints of exaggerated speed claims – who knows. The ISO specs are 8.7ppm for black print and 4.5ppm in colour.

Our five-page black text print gave 7.0ppm and the draft mode print gave 12.5ppm. The 20-page test produced a speed of 8.0ppm, within a gnat’s crochet of the claimed speed. The 5-page text and colour graphics test returned 2.7ppm, though, which is a good deal slower than the claim. 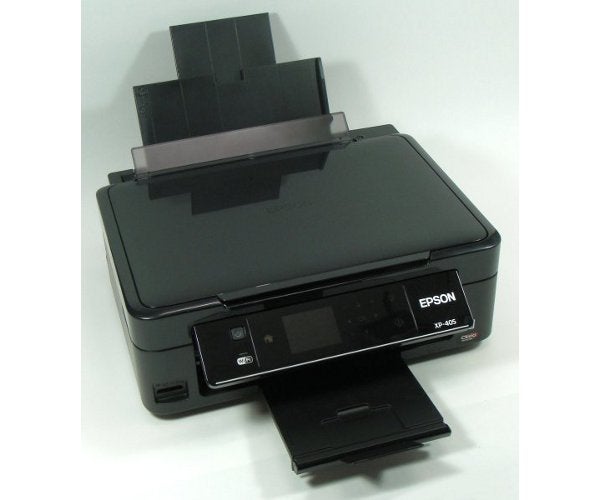 The print quality is better than from some recent budget Epson printers we’ve reviewed. Although black text is not quite as crisp as from a Canon or HP machine, there’s less of the slight fuzz around characters we’ve noticed before and very little misalignment between different passes of the print head.

Colour is also well reproduced, although perhaps not quite as vivid as from some of its rivals. Filled areas are smooth and text over colour shows little spread. Photos have always been a strong feature of Epson printers and our test images showed good colour blends and high levels of detail, though with less definition in the darker shades. 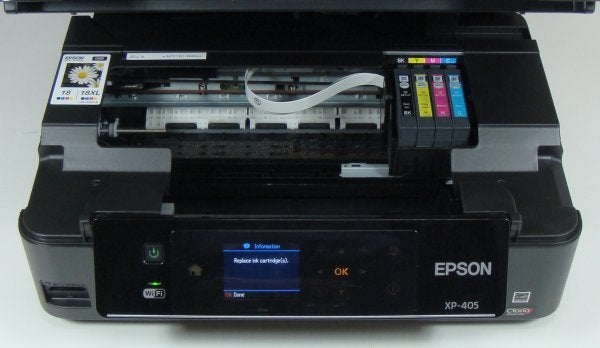 Epson provides two different versions of its Daisy ink cartridges and using the higher capacity, XL, variants gives page costs of 3.9p for black and 11.0p for colour. Both these costs are quite high in comparison with other machines at around the same price, but you may be able to reduce them, over time, by shopping around.

The Epson Expression Home XP-405 is an above-average home or home office all-in-one. In its favour are its small footprint, easy-to-use control panel with touch buttons and it’s versatile printing from mobile devices, both locally and remote. Against this, it’s not that cheap to run, has no duplex print and photo printing, normally a strength of Epson machines, is slower than usual.