The EH-TW9300W’s picture performance is ridiculously good for a £3,300 projector. Particularly amazing is how impressively it handles HDR. Projectors routinely struggle with HDR due to their innate inability to deliver the sort of brightness HDR requires – unless you spend a fortune on a projector with an extremely bright, likely laser-based light engine.

This isn’t the same level of brightness you get with HDR on a typical modern TV; certainly, you’ll need to be watching in a fully blacked-out room to really enjoy the EH-TW9300W’s HDR pictures. But in such a room the HDR effect is undoubtedly more satisfying than watching SDR content – and this is the first time I’ve felt able to say that about HDR on any sub-£8k projector. At times, the EH-TW9300W’s HDR images look downright beautiful. 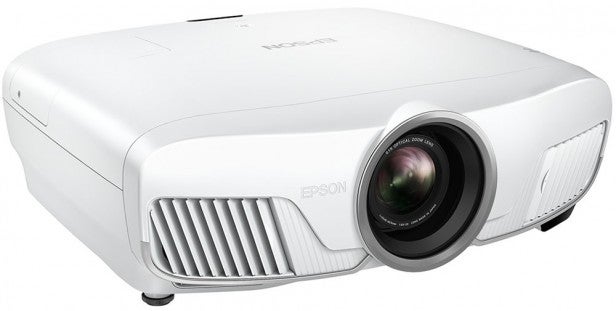 This surprisingly effective HDR performance isn’t just down to this projector’s ability to deliver and sustain more brightness than other mid-range models. Also critical is its excellent black level performance, which essentially delivers blacks capable of looking as deep, rich and free of greyness as those of JVC’s previously unassailable D-ILA projectors.

What’s more, this exceptional black level performance holds good during HDR playback, and isn’t achieved at the expense of subtle detailing and greyscale information in dark areas. On the contrary, with SDR content in particular, the EH-TW9300W’s ability to pick out the faintest detail or slightest colour-tone shift in the darkest picture areas is outstanding.

It’s this projector’s black levels and general contrast that mark out the biggest difference in performance against its cheaper sibling, the EH-TW7300.

Turning to the EH-TW9300W’s 4K capabilities, I must stress that the pseudo 4K engine doesn’t deliver native 4K sources with the extreme sharpness you’d expect of a native 4K projector. However, images do look more polished and sharp than the e-shift images of JVC’s pseudo 4K projectors, as well looking cleaner than native HD sources.

As we often see with video products designed for HDR, the EH-TW9300W handles SDR brilliantly. The subtlety, refinement and, for want of a better word, elegance with which it displays SDR’s more limited colour space and brightness range leads to pictures from HD Blu-rays that are as good as any I’ve ever seen in the sub-£5k space – including JVC’s previously peerless D-ILA models.

In fact, while the JVC models continue to win on black level – just – the way the EH-TW9300W combines its impressive blacks with more brightness adds up to a seriously attractive combination.

The EH-TW9300W has one final, gaming-friendly strength up its sleeve: a very respectable 28ms of input lag, regardless of whether you use a direct cable connection or the wireless HDMI system.

It’s a pity that Epson doesn’t provide a dedicated Game picture preset, however, as to achieve the 28ms lag figure I had to manually change the processing to Fast rather than Fine and, while I left the 4K Enhancement feature active, I turned all the 4K enhancement system’s related adjustments to zero.

It’s hard to find fault with the EH-TW9300W’s performance considering its price. It runs quite noisily in the High lamp mode that works best for HDR, and, as noted before, HDR images need tweaking to get them looking their best. This means the resulting ‘most attractive’ HDR images aren’t 100% accurate. But when you’re dealing with HDR on an affordable projector, striving for accuracy isn’t a workable solution if you want a picture that’s actually enjoyable to watch.

What really matters about the EH-TW9300W is that its HDR compromise options yield far more watchable but still natural-looking results than those of any rival projector besides Sony’s VPL-VW550ES. And that costs nearly £9,000.

While the JVC betters the Epson for black level depth, though, its pictures aren’t as bright nor sharp, and can’t really do HDR at all.

The Sony delivers a touch more resolution with 4K sources, but its black levels and colours are inferior to those of the Epson. Again, the Acer offers outstanding sharpness with 4K sources, and decent colour response, but its black levels are far less impressive than those of the Epson. And the EH-TW7300 is no match for the EH-TW9300W when it comes to contrast and HDR effectiveness.

As an all-round proposition, the EH-TW9300W is the one to beat. Especially when you take its affordability into account. The only reason not to buy this projector is its frustrating inability to handle HDR Xbox One S gaming, or 4K gaming in HDR on the PS4 Pro.

If you’re a movie fan who is after a serious home cinema projector, then the EH-TW9300W is a near-miraculous bargain. Its picture quality is truly remarkable for its money and it can play HDR pretty convincingly – something I’d pretty much given up seeing on a sub-£5,000 projector.