And so 2012’s projector silly season continues. For hot on the heels of lovely new 3D projectors from Sony and Panasonic, and slightly ahead of more new 3D models from JVC, here we have the first of Epson’s new 3D projection range, the EH-TW8100.

Although the TW8100 isn’t the highest-level projector in Epson’s new range, it’s arguably the most interesting. For while many of Epson’s other incoming models are upgrades of last year’s models, the TW8100 is a wholly new proposition.

Perfect market position
It slots neatly into the gap that would otherwise have existed between Epson’s new mid-range TW6100 series and top-end TW9100 series. Comparing it against the TW9100, it doesn’t ship with any 3D glasses (even though it is 3D capable); can’t be fitted with an anamorphic lens attachment; and doesn’t support ISF certification.

In pretty much every other way, though, the TW8100 and TW9100 models are the same,  which means the cheaper model shares the flagship model’s strikingly high claimed contrast ratio and brightness figures of 320,000:1 and 2400 Lumens respectively.

The price seems right
The idea with the TW8100, it seems, is to deliver a more affordable projector for people who care about picture quality but aren’t fussed about enthusiast-grade AV calibration features or instant 3D viewing. The result is a price for the TW8100 of £2,249 versus £2,598.86 for the TW9100, giving you an extra £350 to spend on Blu-rays.

So much for the TW8100’s market theory. Looking at the TW8100 in the flesh, it makes a good first impression with its design. It’s pretty big for a projector at its price level, and feels heavy and robust too. Its slightly pearlescent and textured white finish is appealing too, as is the contrast delivered by the projector’s black front plate and grilles.

Setting the TW8100 up is impressively easy. For as well as an excellent 2.1x level of optical zoom, it also provides plenty of vertical and horizontal lens shifting. This makes it easy to adapt the TW8100 to pretty much any size or shape of room without having to use any image-distorting keystone correction.

The only issue we found during setup is that the TW8100‘s zoom and focus wheels are a touch too stiff, which makes it tricky to make very fine adjustments easily.

Heading into the TW8100’s rather dry-looking onscreen menus via its excellently designed remote control reveals a pretty handy toolset despite the lack of ISF-support. For instance, there’s a series of themed colour presets, which include a Cinema mode, a ‘Natural’ mode, a living room mode (designed to work in a degree of ambient light), two 3D modes, and a Dynamic mode which, essentially, turns everything up to 11 for people who like that sort of thing.

Picture adjustments
There’s also a simple sliding bar system for sharpening or softening the image (though we’d be inclined to leave this in its neutral position); a slider for tweaking the core colour temperature (this sensibly defaults to the best-for-video 6500K); a skin tone adjustment; and a series of gamma presets (which default to the best-for-video 2.2 level). There’s even a pretty wide-ranging colour management system, including adjustments for the offset and gain of the RGB colour elements, and the hue, saturation and brightness settings for the RGBCMY colour elements.

As usual with modern LCD projectors, meanwhile, you can switch the lamp between Normal and lower-brightness Eco modes to conserve energy, and adjust the potency of the dynamic iris that helps boost the TW8100’s contrast.

Advanced picture features
Shifting from the projector’s main Image submenu to a Signal one there’s plenty more to get your teeth into too, including a Frame Interpolation system, a Super-Resolution system, and noise reduction circuitry. The latter two of these systems we tended not to bother with, but the Frame Interpolation system is one of the better examples of such witchcraft, and so warrants at least a little experimentation – at least with its relatively gentle Low setting.

There’s a quartet of other specifications we ought to quickly mention before firing the TW8100 up. The first is that it uses a 480Hz drive system to deliver both brighter and less crosstalk-afflicted 3D images.

The second is that the TW8100’s 3D transmitter is built into the projector’s bodywork. The third is that the 3D transmission system is of the RF type generally considered to deliver the best signal stability. And finally, Epson’s 3D glasses are part of the Full HD 3D Glasses initiative, meaning you can keep them for future upgrades, and use them with other home projector and TV makers who are part of the initiative.

3D Performance
Having just mentioned 3D, we might as well kick off the test phase by checking out the TW8100’s 3D capabilities. And surprisingly, they were at first rather disappointing. 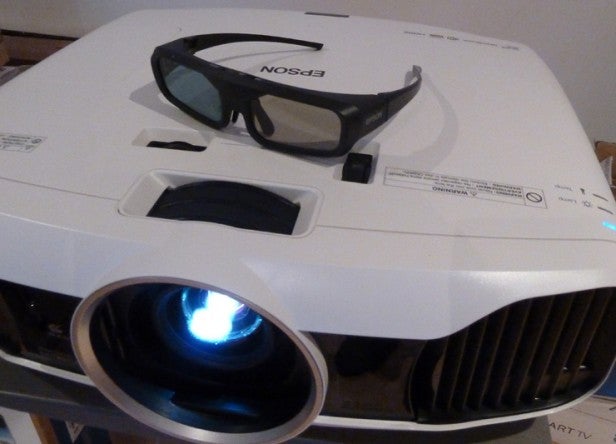 The problem was that moving image segments seem to shimmer and flicker, almost as if they’re made of cellophane. The effect was so distracting and tiring that it made 3D almost unwatchable. And no matter what we tried in the projector’s settings, we couldn’t make the problem go away.

Receiver wisdom
On a hunch, though, we decided to hook the projector directly to our Panasonic Blu-ray player rather than running pictures first through our resident Onkyo TX-SR508 AV receiver. And hey presto, the problem was solved immediately, leaving motion looking much more natural and clean. This is strange, as we’ve never experienced this problem with any other 3D projector. But hopefully the flaw is restricted to our particular receiver. (If anyone experiences similar issues with the TW8100 and other receivers, please do let us know).

Having solved the motion problem, we were now faced with 3D pictures that actually rank as very good for the TW8100’s price. Brightness levels are impressively punchy, and colours look both dynamic and natural. Detail reproduction is mostly superb too, doing full justice to the active 3D format.

Minor crosstalk
The only time this isn’t true is when the image has a really extreme depth of field to it, at which point the TW8100’s 3D images betray a few signs of crosstalk ghosting noise. Enough, at any rate, to leave distant backdrops (like the rock formations of the Isle of Skye as Elizabeth Shaw emerges from a cave in the second chapter of the Prometheus Blu-ray) looking a bit out of focus.

With 2D the TW8100 is consistently excellent. Particularly striking is how bright images look, as that 2400 Lumens of light output are put to aggressive use in ensuring that pictures pop of the screen in explosive fashion for a sub-£2500 projector. Colours look dynamic and clean too, and they’re portrayed with a range and degree of subtlety that you don’t customarily see at the TW8100’s price point. 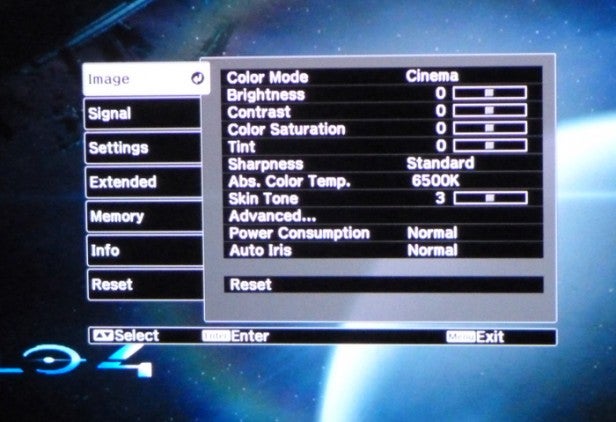 Black levels are very good too, achieving a good degree of depth while also allowing dark scenes to enjoy both a reasonable amount of shadow detail and plenty of punch as Epson’s latest LCD optical engine manages not to remove too much brightness in its bid to deliver a convincing black colour.

Black level talk
We do need to stress, though, that while very good, the TW8100’s black level response isn’t quite as immaculate as that of Panasonic’s AT6000 or Sony’s HW50. There’s a touch more greyness over the darkest parts of the picture, and a touch less shadow detail – especially compared with the HW50 if you’ve got that model’s Reality Creation system active. But then the TW8100 costs nearly £800 less than those other models, and its black level performance is still strong by general projection standards.

The TW8100 does a bang-up job, too, of delivering all the lovely clarity and detail inherent to high-quality Blu-rays. And it does this without making edges look stressy or grain look exaggerated.

We do have a couple of niggles to finish with, though. First, the TW8100 runs a bit noisily using its Normal lamp mode – so it’s nice to find that the Eco mode reduces the running noise down to almost nothing. However, the shift from Normal to Eco doesn’t just reduce the image’s brightness; there’s also a pretty significant shift in the image’s colour tone, with the Eco mode looking much less warm and red-dominated than the Normal one.

The TW8100 provides the colour tools to ‘equalise’ the colour appearance of these two lamp settings, but we don’t totally understand while the colour tone should be so different in the first place. Our only guess – unless it’s just a mistake! – is that Epson perhaps sees the Eco mode as the best option for a dark cinema room (certainly we found we preferred its colour tone in our blacked-out test room) and the Normal mode as the best option for more casual environments where there may be colour-sapping ambient light to contend with.

Verdict
The TW8100 is yet another fine addition to the current surge of new projectors, combining a strong all-round performance with a price that cunningly sits comfortably lower than those of its outstanding Panasonic AT6000E and Sony HW50 rivals.