After what was in truth only a pretty lightweight bit of calibration, the TW7200 was producing pictures that are remarkably, almost ridiculously good for a projector with a sub-£1,900 price tag attached to them.

Particularly outstanding right off the bat was the projector’s handling of dark scenes. There was a time when LCD was, to be honest, the poor relative where black level response was concerned. But it’s been catching up at a rate of knots in recent times, especially in Epson’s case as the brand has continually refined the speed and effectiveness of its dynamic iris system. And so we find the TW7200 producing a really outstanding combination of black level depth and shadow detail. 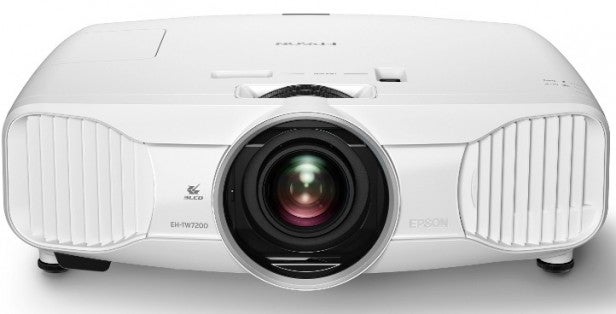 The shadow detail part of this statement is critical. While some sub-£2k DLP projectors might – though only might – claim to deliver slightly deeper black colours than the TW7200, they certainly haven’t been able to do this while also presenting nearly as much detail and colour subtlety in dark scenes as the TW7200 can.

This matters not just because it’s kind of nice to be able to see every detail of an HD image, but also because it avoids that common trait among video devices whereby dark scenes look hollow and flat compared with light ones. This helps the TW7200’s presentation of your typical movie feel more even-handed and consistent, which obviously makes that film easier to become immersed in.

We were also struck by the lack of noise in the TW7200’s pictures. Dark picture areas aren’t affected by green or grey speckling as they can be with some over-aggressive DLP models, and nor is there any hint of the colour-striping ‘rainbow effect’ seen to some degree with almost all single-chip DLP projectors.

Notoriously grainy discs like the final Harry Potter movie on Blu-ray are handled well too, with the grain never being allowed to look excessive or unnatural, but also never being smoothed away to the point where the image looks soft and unfilmic.

Even motion is handled well, with far less judder than you have a right to expect. This is particularly impressive considering that it’s achieved without any high-powered motion processing to smooth potential issues away.

Yet another area of strength for the TW7200 is colour. While its pictures don’t contain the most aggressively saturated tones we’ve seen from an affordable projector, the colour palette is extremely natural in tone right across its range, and the subtlety with which blends are delivered is striking, giving images a sense of fidelity and solidity seldom seen for under £2,000.

Deserving of praise, too, is the dynamic iris function. This delivers a palpable improvement on the similar features found on previous Epson mid-range projector generations in the way it manages to deliver a boost to contrast without, crucially, making the picture look unstable and flickery.

The dynamic iris also, mercifully, goes about its contrast-boosting dynamic iris business without causing the rather alarming grating noises that proved hard to take on some of Epson’s previous projector models. Phew.

If we had to be picky we might say the TW7200’s images are a tiny bit soft once they’ve been calibrated to deliver their best balance between noise and detail. And we suspect that Epson’s higher-end TW9200 series (which we’ll be testing soon) will achieve even deeper blacks and slightly more precision. But then that’s why they’ll also cost significantly more!