If the TW7200 impressed with 2D it’s arguably even better in 3D mode. Particularly outstanding when compared with both Epson projectors of the past and recent more expensive rivals like the JVC X35 and Sony HW55 is its handling of active 3D’s crosstalk double ghosting problem.

Basically there’s hardly any trace of it, even during shots with extreme depth and extreme light and dark contrasts. Excellent. And bad news for rivals, of course, for if a £1900 LCD projector can deliver such crosstalk-free images, we’ll be less tolerant of more expensive models that can’t.

Not having any crosstalk makes it easy to appreciate the full HD resolution with 3D Blu-rays that’s active 3D’s hallmark, and the pixel density and detailing joins forces superbly with the projector’s combination of high brightness and good contrast to conjure up a deep and extremely well-developed sense of space.

Pictures look bright and strikingly rich in colour for an active 3D projector too, and there’s no obvious drop off in the subtlety with which the colour palette is rendered.

The only issue with 3D pictures, really, is that they suffer with more motion judder than 2D ones. However, although there isn’t anything you can really do to get rid of this, it’s only during fast camera pans across large-scale environments that it can become a distraction. And even then it’s not as distractingly ‘billowy’ as the judder seen on some 3D projector rivals. 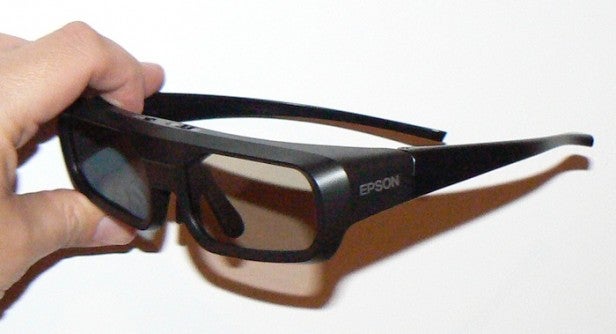 If you use the TW7200 in its Eco lamp mode it runs remarkably quietly, using its large bodywork to disperse heat and fan noise very effectively. It’s hard to imagine anyone getting distracted by the TW7200’s running noise even if they’re sat very close to it.

Unfortunately, fan noise steps up considerably when you switch to the high lamp mode. With 2D the solution is to simply stick with the Eco lamp setting unless you’ve got a lot of light in your room for some reason. But with 3D you really need to have the lamp running hard to compensate for brightness lost in the active shutter glasses. So with 3D, at least, the fan noise has to constitute a slight concern unless you can box the projector in somehow or else site it a long way from your seats.

The remote for the TW7200 is unusually large, but there’s no harm in that considering you’ll be using it in a dark room for much of the time. Its size isn’t the only thing that helps it perform well as a control device for a projector either; its buttons are also backlit, and sensibly laid out too.

The last thing to cover with the TW7200 is input lag – as in, the time the projector takes to render images after receiving image data at its inputs. Of critical importance to gamers, input lag measured in at around 65ms on the TW7200. This is not a bad result, but nor is it down around 40ms or below where we really like to see it. What this means is that you may find the TW7200’s input lag costing you the occasional extra life in twitch-reaction games like Call Of Duty.

If you want quality, big-screen movies for startlingly little money, then you certainly should buy an Epson EH-TW7200. Partly because there really isn’t much competition around in the £1500-£2500 zone right now, but mostly because the TW7200 punches comfortably above its price weight.

This makes it a great option if you want serious home cinema projector but don’t have the budget to get something like the Sony VPL-HW55ES. It’s a serious step up from the similarly priced BenQ W1500, while its superior 3D performance helps it edge more expensive efforts like the Vivitek H5085.

After a few hit and miss models over the past year or two, the Epson TW7200 marks a spirited return to home cinema form for Epson. It’s fair to say that if this is how well Epson can do with its new mid-range model, we can’t wait to get stuck into the brand’s new TW9200 flagship. Watch this space…