The TW7200 is a new upper mid-range home cinema LCD projector boasting such promising features as vertical and horizontal image shifting, a high 120,000:1 claimed contrast ratio, a high brightness of 2000 Lumens, and 3D playback. It’s very much a mid-range projector, but it’s the kind of that could serve as a great entry for anyone looking to make their first steps into serious home cinema.

The TW7200 is a chunk of kit for a mid-range projector. There’s a startlingly – and promisingly – large lens protruding from the centre of its front edge, with numerous inches of grilled white bodywork extending to either side, and a deep chassis behind pretty much filled our fairly heavy-duty projector stand.

Despite looking a touch plasticky it wears its size reasonably well thanks to its white finish, angled-back sides and rounded corners.

Connections are pretty much as we’d expect from a modern mid-range projector. Two HDMIs will be most users’ first port of call, but there’s also a component video input, and a D-Sub PC port. Plus there’s a 12V trigger port you could use for, say, automatically firing up a mechanical screen, and an RS-232C port for integrating the projector into a wider home entertainment/control system.

Turning our attention to the TW7200’s innards, it uses – as ever with an Epson home cinema projector – a 3-LCD system. It claims a very promising contrast ratio of 120,000:1 delivered by a dynamic iris system, as well as a high brightness figure of 2000 Lumens that should serve it particularly well when handling its 3D duties.

This latter spec needs a bit more attention. With the TW7200, when we’re talking about ‘brightness’ we’re really talking about Colour Light Output, which is a measurement of the brightness of a projector in its best colour-balanced mode rather than the measurement of only a pure white image that many rival projectors quote. This makes the Epson’s quoted figure much more ‘real world’ – as in, much more likely to reflect what you see on screen.

Epson is currently on a serious marketing mission to educate consumers on the difference between its CLO and ‘White Light Output’ quotes on projector spec lists – not least because rival single-chip DLP technology can’t compete with LCD if the CLO system is used because of the colour wheel system it has to use.

Obviously, our main position on all this is that we’ll always just base our judgements on what we actually see up on our test-room screen rather than getting embroiled in arguments about different ways of measuring stuff to go on spec sheets. But it has to be said that Epson does have a point– and applying a light meter to the TW7200 and a couple of recent DLP models we’ve tested undoubtedly proves that Epson’s quoted figures are indeed much more measurably accurate with a video signal feed than those of the DLP models. 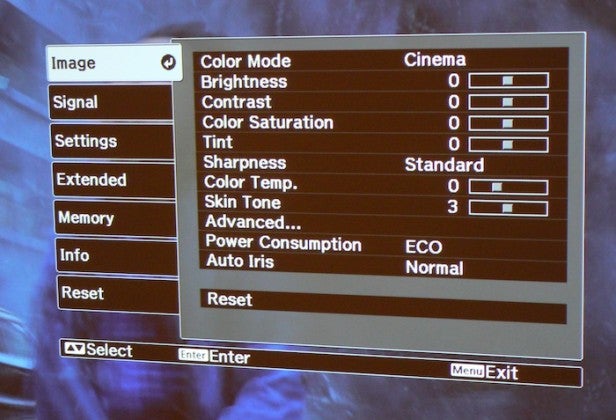 There’s a decent amount of picture set up tools tucked away within the TW7200’s drab, but efficient onscreen menus. For starters there are six picture presets: Dynamic, Living Room, Natural, Cinema, 3D Dynamic and 3D Cinema (it’s great to see Epson providing two different 3D modes rather than just sticking with one like many projector makers do).

There are also colour temperature, skin tone, gamma, and RGBCMY colour adjustments to keep tinkerers/installers busy, as well as Normal and Eco lamp modes and Off/Normal/High Speed settings for the auto iris mode that will likelky be needed to secure the projector’s optimal contrast performance.

There’s even a fair bit of video processing at your disposal, including noise reduction routines, a multi-level Super-resolution tool which – surprise surprise – sharpens the picture, and a choice of de-interlacing options to cover both video and film sources.

The TW7200 is brilliantly easy to set up. Its top edge houses separate wheels for both vertical and horizontal image shifting, and these both let you shift pictures around optically over an impressively wide movement range. Add to this a huge 2.1x optical zoom and you can appreciate just how simple it is to get the TW7200’s pictures in the right place and at the right size for your screen.

What’s more, you should be able to position images correctly without needing to use the TW7200’s keystone correction tool to straighten the picture’s edges. Which is a good thing, as digital keystone adjustments simply distort images to stop edges looking angled – and if there’s one thing you don’t want to be doing to full HD images at huge sizes, it’s distorting them.

In terms of the best settings to use to optimise image quality on the TW7200, a few suggestions would be that your best starting point is the Cinema preset; that you will probably like using the TW7200’s dynamic iris system for the extra contrast punch it contributes even though you can get a fraction more image stability from turning the dynamic iris off; and that you should avoid the noise reduction options when you’re watching HD as they actually do more harm than good in this scenario.