Epson’s 2013 projector range has got off to a pretty good start. The brand’s new EH-TW8100 model wowed us with its combination of performance, features and value, while the step-up EH-TW9100 impressed too – aside from ironically having some of its thunder stolen by the quality of the TW8100.

For many people, though, the sweetest spot in Epson’s new range will likely be the TW6100/TW6100W duo. Both of these models continue to offer 3D playback along with the promise of Epson’s renowned LCD performance standards, while the TW6100W model add Wi-Fi video connectivity to the mix as well. All for just £1300 and £1500 respectively.

Aside from the aforementioned wireless HD video transmission (which we’ll cover in more detail in a moment), the only difference between the TW6100W we have here and the TW6100 is that the former wears white while the cheaper model wears black. Both models enjoy the same attractive if surprisingly (for its price level) large design, complete with pleasingly subtle curves, bold grilles either side of the centrally mounted lens, and an engaging glossy finish. In short, you can leave either of the TW6100 models in a prominent position in a typical living room without it ruining your decor.

‘Hard’ connections on both projectors include two HDMIs, a composite input, a component video input, a D-Sub PC input, an RS-232 port for system integration, and even audio ports to support a built-in 2x10W speaker system. We would never advocate that you use this in any but the most casual of circumstances, though, as the audio produced sounds puny versus the size of the pictures you’re watching, while also sounding dislocated from the on-screen action.

The WirelessHD system you get with the TW6100W is an improvement over the system that debuted on last year’s Epson projectors, in that the transmitter offers five HDMI inputs compared to the single input found on last year’s range (making it a handy HDMI switchbox). In addition, the receiver is built into the projector rather than being an external item. 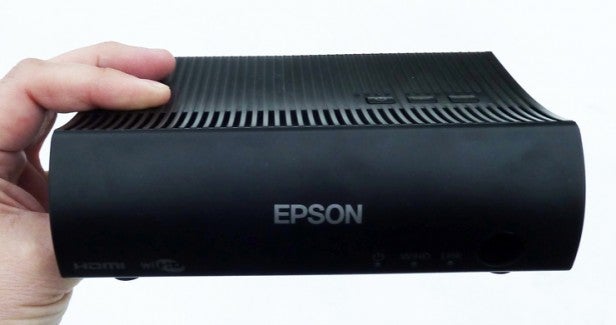 As with the original system, the latest WirelessHD engine can still deliver cable-free Full HD 2D and 3D images from your sources to the projector. During a week of rigorous testing we didn’t suffering so much as a single dropped connection.

While this is obviously a great help for most people, the WirelessHD system does suffer from a couple of flaws. First and worst, our tests discovered that the WirelessHD system adds a delay in picture reproduction of around 60ms compared to using a normal HDMI cable. This is high enough to make the Wi-Fi option more or less a non-starter for serious video game fans.

The other issue is that we never managed to get the WirelessHD transmitter to work well in conjunction with an Onkyo SR508 receiver. In fact, it didn’t want to see outputs from the receiver at all. We can’t say how widespread with other receivers this problem might be, but we’d be surprised if the SR508 was the only affected model.

Next
Set-up and Performance Review