Epson’s first forays into the 3D projection market have generally impressed us. The flagship TW9000 proved particularly excellent with its combination of rich contrast and punchy, clean 3D imaging, while the significantly cheaper mid-range TW6000 offered good bang for your buck – even though it was a fairly substantial step-down in performance terms from the TW9000.

So it is that we have reasonably high hopes for Epson’s entry-level 3D projector, the EH-TW5900. Especially as it shares quite a few of is specifications with the step-up TW6000.

It’s an attractive projector, for starters, thanks to its glossy white finish (designed to suit relatively casual living room environments rather than blacked-out cinema rooms) and pleasantly rounded bodywork.

Promising externals
Its fairly large footprint for a budget projector raises hopes of better innards than you might usually expect with a £900 projector – especially a 3D-capable one. The large venting that appears to either side of the centrally-mounted lens also makes us wonder if the Epson EH-TW5900 might run more quietly than the majority of cheap and cheerful projectors, despite its cooling fans doubtless having to work pretty hard when the projector is delivering the sort of brightness levels required for good 3D.

On the subject of 3D, it’s a pity we have to say that Epson doesn’t include any glasses for free with the projector, meaning you’ll have to cough up £70 or so for each pair you need. But then we guess that with the TW5900 you are, after all, getting a nicely specified, dedicated home cinema projector for a fair chunk under a grand. So maybe it is a bit unreasonable to expect glasses to be thrown in for free.

Connections
The Epson EH-TW5900‘s key specifications include, on the connections side, a respectable two v1.4 HDMI ports, a component video port, a D-Sub PC port, an RS-232C control port and, surprisingly, LAN and USB inputs. The LAN is there for adding an optional external 3D emitter should you feel your room set up would benefit from one, while the USB port rather excellently can be used for playing back photo files from USB sticks or connected digital cameras.

The optics at the TW5900’s heart promisingly copy those of the TW6000, comprising three 0.61in C2Fine 12-Bit panels driven at the 3D-friendly 480Hz refresh rate. This is pretty impressive stuff for the TW5900’s money, as is the fact that the TW5900 retains a dynamic iris like its costlier sibling.

You can never depend on such manufacturer-quoted figures for accuracy, but the differences between the TW5900 and TW6000’s specs in these two areas – especially contrast – are sufficiently high to raise a least a little concern over the Epson EH-TW5900’s performance potential.

Setting the Epson EH-TW5900 up is a hit and miss experience. On the upside, its three screw down legs are fairly effective at making the projector sit evenly on a shelf, coffee table or projection stand. However, the TW5900 doesn’t have any vertical image shifting, which can make positioning the projector in just the right place to suit your screen very difficult unless you’re willing to distort the image by using keystone correction – which is not something we’d ever recommend.

To be fair, precious few – if any – sub-£1000 projectors have vertical image shifting. But its absence on the TW5900 is made to look more strange by the fact that its onscreen menus are startlingly well stocked with image calibration tools, including extensive gamma adjustments and a pretty fulsome colour management system.

Taking colour control
This colour management system proves handy, as it happens, for in its out of the box state the Epson EH-TW5900’s colours are a touch off-kilter, with slightly pink skin tones and over-egged reds and greens.

After a little work, though, we felt in a position to properly assess the TW5900’s performance. And to be honest, our first feeling was one of disappointment. 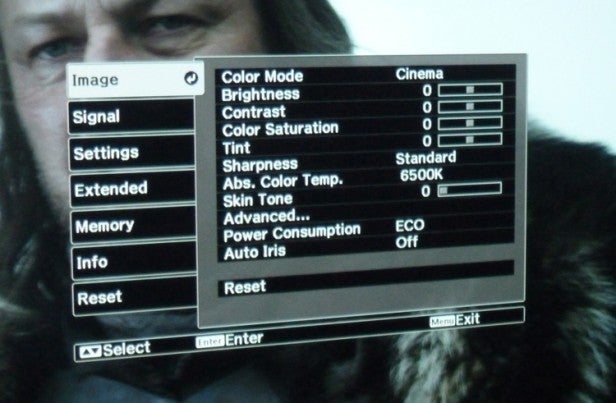 The first thing we fed it – possibly rather harshly – was the Blu-ray of Harry Potter and the Deathly Hallows Part 2: a film that’s quite possibly the most consistently dark film we’ve ever seen. And the TW5900 struggled, for one simple but glaringly obvious reason: a fairly profound lack of black level depth.

Grey day
Dark scenes look as if they’re constantly appearing behind a grey-blue cloud – a fact which instantly and constantly makes them look too unnatural to get entirely involved in. Especially as the grey sheen also obliterates from the picture quite substantial amounts of the shadowy detailing that gives dark scenes a sense of depth and space.

The greyish-blue ‘coating’ to dark scenes also harms the projector’s colour reproduction, with hues generally looking slightly flatter and less life-like with dark fare than they do during bright scenes.

You can improve the projector’s black level performance a bit – though not massively – if you call in the dynamic iris system. However, this presents a problem, since you can clearly hear the iris opening and closing during quiet parts of films. Especially if you use the standard rather than high-speed dynamic iris setting. Also, even if you can tolerate the grating noises the dynamic iris makes, you will additionally have to put up with dark parts of the picture looking even more devoid of detail than they do without the dynamic iris active.

Time to think higher?
At this point it’s important to remember that the Epson EH-TW5900 does only cost £900, and that the step-up TW6000 also didn’t have the greatest black level response despite costing at least £300 more. However, the TW6000’s contrast remains sufficiently superior to that of the TW5900 to make us feel that the extra money it costs is well worth saving up.

There are also sub-£1k DLP projectors around now that deliver much better black level response than the TW5900 – though these tend to trouble you with DLP’s rainbow effect too.

With bright scenes, the Epson EH-TW5900 is a much better proposition. In fact, it looks good for its money, thanks to its impressive sharpness with HD material, much more natural and subtle colours than you see during dark scenes, and a level of brightness that goes well beyond that of your average budget projector.

You suddenly notice during bright scenes, too, that the projector handles motion very well for a budget projector model, with no serious judder issues but also no sense of unnatural fluidity. Motion just looks… right.

Artefact-free
This being an LCD projector, there’s no trace of the rainbow noise common with cheap DLP projectors either, and provided you don’t try and push the image beyond around 120-130in, you don’t feel aware of any overt pixel structure distractions unless you’re sat too close to the screen.

Switching to our favourite 3D discs, the EH-TW5900 performs better relative to the competition than it does in its 2D mode. Crosstalk, while certainly not non-existent, is seldom remotely distracting unless you go actively looking for it. Detail levels are good too, even if the picture looks a bit softer than the best 3D projection images we’ve seen.

Colours are bold if a little short on subtlety, and the picture’s contrast ironically looks much richer thanks to the way the darkening effect of the active 3D glasses counters some of the greyness noted with 2D viewing.

The glasses do, it must be said, knock a considerable chunk of brightness out of the TW5900’s pictures. But this is true of pretty much any 3D projection system – and the majority of 3D TVs too.

One final positive thing to add about the Epson EH-TW5900 is that it runs extremely quietly for a bright budget projector – especially if you stick with its Eco lamp setting (except for when you’re watching 3D), and you haven’t activated the grating dynamic iris.

Verdict
If you’re really into 3D and can’t find more than a grand then the Epson EH-TW5900 isn’t a bad option, as its 3D performance, at least, delivers more than you might reasonably expect for its money.

However, a pretty unsatisfying black level response severely dents its 2D pictures, to the point where we’d strongly recommend that serious film fans try and find a bit more money for, say, Epson’s TW6000 if you can. The only exception to this could be if the room your projector is going into has very light walls, where the lack of black level won’t be so noticeable due to your general viewing conditions.