With the past few LCD projectors I’ve tested having struggled to keep up with the latest offerings that use rival DLP technology, the TW5210 comes as a pleasant surprise. Especially considering how cheap it is.

The most unexpected but welcome improvement the TW5210 delivers versus other recent Epson models comes in the all-important contrast department. Dark scenes are less affected by the grey wash and/or blue tinting issues cheap LCD projectors generally suffer with, as well as containing strong amounts of shadow detail. These two factors combine to make dark scenes feel much more natural partners for a film’s bright scenes, and make for a more consistent, immersive viewing experience.

While the TW5210’s contrast performance is far better than that of either its TW5200 predecessor or other recent LCD projectors, it’s still not nearly as rich in the black-level department as a good DLP model like the BenQ W1070.

However, it offers a slightly cleaner look than DLP to dark areas and is completely immune to affordable DLPs’ rainbow effect issue, which can cause people sensitive to it to be distracted by red, green and blue stripes appearing fleetingly over bright image areas.

The TW5210’s much improved black levels have not come at the expense of brightness, though. In fact, Epson’s latest projector propels its pictures onto your screen with levels of punch and dynamism that are seriously impressive for such a cheap, home-cinema-focused model. There’s none of that slightly flat look to rich colours and luminance peaks you often get with budget projectors, even when using the TW5210’s Eco power setting.

Even more striking for its money is how well the TW5210’s images are able to fight the pollution of ambient light if you use the Normal lamp mode and Dynamic picture preset. It’s been a long time since I’ve seen a budget projector prove so effective at adapting itself to both dark and bright room situations.

The TW5210 continues its impressive leap forward from its predecessor with its colours. They’re both more dynamic and, crucially, much more natural. Most users will be happy with the colours right out of the box using either the Bright Cinema setting for rooms with a little ambient light in them or Cinema for dark rooms. But what errors these settings leave – most notably a slight tendency to overcook blues and yellows – are fairly easy and successfully remedied by the colour management system. 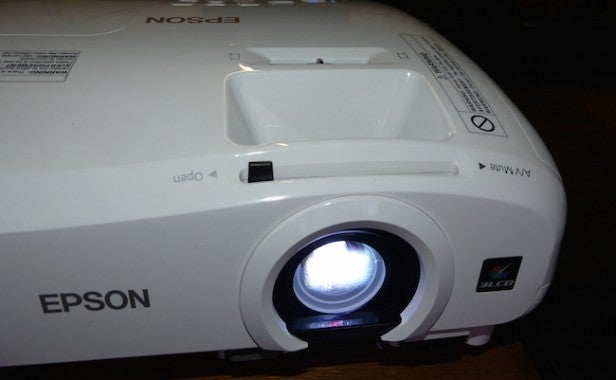 Particularly good to see is how well skin tones are handled, as they enjoy more warmth, more subtle tonal shading and more naturalism than they ever did on the TW5200.

The TW5210 scores another surprising hit for its money with its sharpness. Its pictures are crisp enough to leave you in no doubt at any time that you’re watching HD, yet at the same time the sharpness doesn’t look forced – so long as you don’t use the Detail Enhancement feature in the Image Enhancement menu higher than around its 15 level.

You’re slightly more likely to spot jaggedness around fine, curved edges than you would be with a good Full HD DLP model, but this is no more than you’d expect, and isn’t severe enough of an issue to classify as a common distraction.