The TW5210 is an LCD projector designed for the home user, rather than businesses. It comes with a built-in speaker, a claimed 2200 lumens of brightness, and at the time of writing is on sale for just £500.

But is it really the bargain it sounds, or do you need to throw another couple of hundred pounds into the pot to get a reliable footing on the home cinema projection ladder?

The TW5210 is a cute-looking chap in an eccentric sort of way. The way its rear end sits much higher than the front edge gives it an unusual but not unattractive ‘ski slope’ look from the front – especially given the projector’s glossy white finish.

The use of rounded-off corners and a wavy look to the fascia’s upper edge completes the fun. Another dull, grey rectangle the TW5210 most certainly is not. 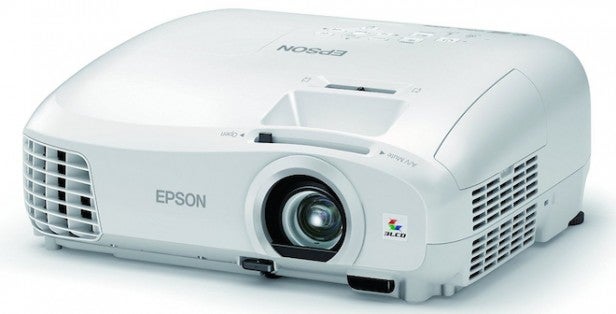 The only issue I’d take with the design is that the reason the front edge stands so short versus the rear is that the lens it carries is quite small, which could potentially impact picture quality.

The TW5210’s bodywork carries a wealth of manual setup aids. A set of control buttons on the top edge has your back when you can’t find the remote control. Simple zoom and focus ring adjustments are accessed via a panel cut out of the top edge above the lens barrel, and a simple sliding door mechanism protects the lens when you’re carrying the TW5210 around.

There’s a sliding horizontal keystone adjustment (more on this later), and finally there’s a drop-down leg under the front edge to angle the projector’s images upwards onto your screen, as well as screw-down legs at each rear corner should you need to angle the image down.

Connections are pretty impressive for such an affordable projector. Two HDMIs are on hand to handle DVD and Blu-ray players, plus there’s a D-Sub PC port, a composite video port, a stereo audio input to feed the built-in 5W speaker, and a USB port that can be used for playing back JPEG photos from connected cameras or USB storage devices.

One of the HDMIs supports the MHL protocol, allowing you to play content stored on your mobile phones and tablets through the projector. 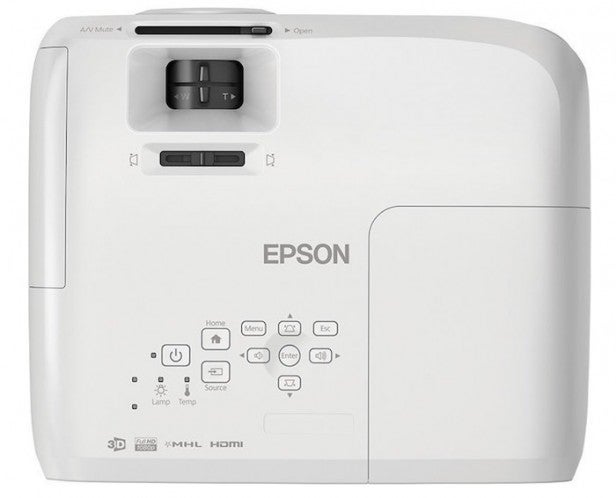 The TW5210’s specifications look pretty promising for such an affordable machine. It delivers Full HD resolution (by no means a given at its price point), and its claimed contrast ratio is a promising 30,000:1, delivered with the help of a dynamic iris system that can continually adjust the amount of light emerging through the lens to suit the brightness content of the images being shown.

The TW5210’s claimed contrast ratio is twice as high as the one quoted for its TW5200 predecessor. It also claims a potent maximum brightness of 2200 lumens – dropping to a still respectable 1,500 lumens when using the projector’s Eco lamp setting – and surprisingly for a budget projector there’s even some video processing available. Options include MPEG noise reduction, a sharpness booster, and even a frame interpolation system for smoothing motion playback.

While 3D might be in seemingly terminal decline on TVs this year, the TW5210 supports 3D playback (though you don’t get any 3D glasses supplied). Which is fine with me, as 3D has always felt more at home on projectors than TVs, thanks to the much bigger images they deliver.

As noted earlier, the TW5210 has plenty of physical tools to help you get images in the right place on your screen. These do not include, though, vertical image shifting. This means most users will have to use keystone correction to get the sides of their images perpendicular, even though keystone correction distorts the pixel-for-pixel rendering that film fans ideally like to get with 1920×1080-resolution projectors.

Vertical image shifting is extremely rare on sub-£800 projectors, though, so it’s unreasonable to feel too disappointed by its absence on a projector as cheap as the TW5210.

The same argument goes for the TW5210’s 1.2x optical zoom. Yes, it’s not exactly generous, but getting any optical zoom at all for around £500 is arguably a bonus.

The TW5210 provides considerably more picture setup options in its onscreen menus than I would expect to find at this price point. Colour management for the RGBCMY colour elements delivers markedly more accurate results than you got with the TW5210’s predecessor, the TW5200.

The Power Consumption Mode is essential, too. Its Eco option delivers the most satisfying images for dark room viewing as well as greatly reducing the projector’s running noise. The Normal mode injects enough extra light into images to make the projector startlingly effective in rooms that have even quite a lot of ambient light in them – so long as you can live with the upsurge in cooling fan noise.

The Auto Iris mode is important to experiment with. I ultimately preferred its Normal mode, as this results in a more stable image. The Fast mode delivers slightly better black colours, but is more likely to cause distracting shifts in the image’s overall brightness.

I also marginally preferred to use the projector’s Fast video processing mode, as this seemed to deliver a more consistently natural image than the more processing-heavy ‘Fine’ mode. Admittedly not using the Fine processing setting did mean I couldn’t use the Frame Interpolation system – it’s greyed out if you choose the Fast processing option. But this wasn’t a major problem, as the TW5210 doesn’t really need Frame Interpolation to deliver a respectable motion performance, at least with 2D content.

Judder is more noticeable with 3D, but if you find yourself really discomforted by this then the option is always there to turn Fine processing and Frame Interpolation on.