For the most part, Epson’s latest LCD projector range has fared very well on TrustedReviews. So I have high hopes indeed for the TW4400 too, sitting as it does just one rung from the top of the Japanese brand’s home cinema range (below the outstanding if costly TW5500).


It starts out promisingly, by sporting more or less the same reassuringly large, robust and weighty – if not especially stylish – design as the TW5500, with the only significant difference being that the TW4400 is white where its flagship brother was black.

There are pros and cons to the shift to white; on the upside, it will blend more readily into a typical living room ceiling than the black model. But on the downside it might not blend so fully with the darkness of a dedicated home cinema room. But then I guess this is fair enough given that the near-£1,500 price gap between the two models might well find them headed for quite different final destinations.


The TW4400’s connectivity is as we would expect for its price level, which is to say it hosts two HDMIs, a D-Sub PC port, an RS-232 control port and a single 12V trigger output, among other things. You might feel that a little more multimedia support would have been good; a USB port, perhaps. Especially given the lengths some of Epson’s cheaper models go to in this regard.


But then I guess Epson can argue that the TW4400 is a serious home cinema machine that might well be permanently mounted on the ceiling or built into a cabinet, in which case you wouldn’t be able to use a USB socket easily even if the projector had provided one.

The TW4400’s specifications make for some interesting reading. Particularly eye-catching is its claimed contrast ratio of 130,000:1 – a huge figure even by the eternally optimistic standards of the LCD projector market.


As with the TW5500 – which actually promised a 200,000:1 contrast ratio – the TW4400’s contrast credentials owe much to its innovative ‘dual layer iris’ design. This currently exclusive Epson technology allows the TW4400 and TW5500’s dynamic contrast mode to reduce the amount of light being emitted through their lenses in two separate stages, rather than the usual single ‘jump’ other LCD projectors use. This allows Epson to deliver increased brightness reductions when showing dark scenes – to deliver a more convincing black colour – without suffering the sort of flickering effect seen when lesser LCD projectors try to be too aggressive with their dynamic contrast systems.


The TW4400 also features a PixelWorks scaler and full 10-bit video processing. Which is good. Though I guess I should point out that this falls rather short of the HQV, 12-bit processing sported by the TW5500.


Brightness, meanwhile, is rated at a very respectable 1,600 Lumens; the native resolution is – of course – Full HD; and the LCD ‘engine room’ comprises the much-respected C2Fine inorganic D7 panel design.

In many ways, setting up the TW4400 is a joy. For instance, simple, immediately accessible and remarkably flexible horizontal and vertical image shift wheels should be able to help anyone get the picture perfectly located on their screen without any need for the image-distorting nastiness known as keystone correction. Nor should you need to faff about with lowering or raising the legs on the projector’s underside.


The zoom and focus lenses are simplicity itself too, and the onscreen menu system is well-presented and logical to navigate. The remote control is quite effective, too, thanks to its combination of a bright backlight, comfortable size, and sensibly limited number of buttons. 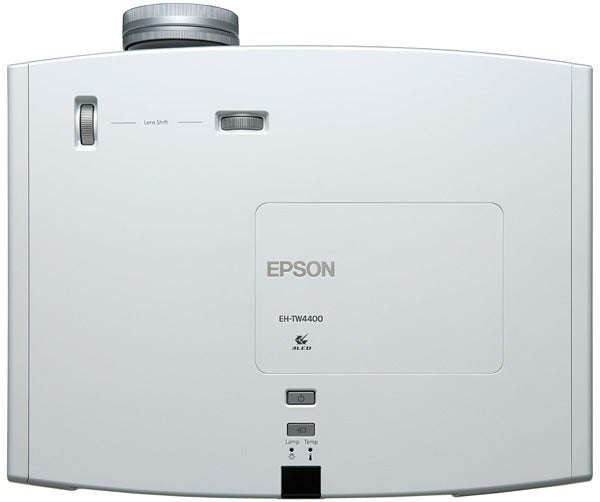 The only complaint I’d have with the ‘physical’ side of the TW4400’s set up and operation is that the optical shift wheels are a little imprecise – especially once you start getting towards the extremes of their operational range.


The TW4400 does cause a little consternation when it comes to fine-tuning its pictures, though. For a start, it doesn’t have the TW5500’s Imaging Science Foundation (ISF) calibration support. More troubling, though, was the difficulty I had getting a perfect balance between the projector’s contrast and brightness settings.


None of the presets quite seemed to deliver the right combination of ‘punch’ and shadow detail (though the Theatre Black 1 mode arguably gets the closest if you’re not into the whole picture calibration lark).


And it was only after more trial and error than I would ideally have liked that I settled on the most balanced picture. More on this in the picture quality section of the review.

My slight difficulties with getting a perfectly balanced picture seem surprising given that the TW4400 is actually well-equipped with fine-tuning features. These include various absolute colour temperature settings (including the 6500K one best suited to video playback); a skin tone tweaker; various gamma presets (including the key 2.2 setting); plus offset and gain adjustments for the red, green and blue picture elements, and hue, saturation and brightness tweaks for the red, green, blue, cyan, magenta and yellow colour elements.


The TW4400 also goes big on noise reduction stuff, with separately adjustable standard NR, mosquito NR and Block NR options. Plus it’s out to see off judder thanks to a Frame Interpolation engine.


This judder reduction actually works quite nicely too, if you like that kind of thing, helping DVDs and TV sources look smoother without asking you to tolerate too much in the way of side effects – so long, at least, as you avoid the mode’s ‘high’ setting. Actually, I personally preferred the Low mode to even the mid-level Normal setting. If you’re wondering why I didn’t mention Blu-ray in the previous paragraph, it’s because the Frame Interpolation doesn’t actually work with 1080p/24 Blu-ray playback. Instead you get a 4-4 pulldown system, which again subtly improves motion fluidity without becoming over-obvious.


Many cinephiles will probably prefer not to have any motion processing engaged at all, of course. And if that sounds like you, fear not; even in its ‘naked’ form, the TW4400’s motion reproduction looks natural and seldom distracting.

The TW4400 is to be congratulated, too, on its colours. For it delivers a rich, vibrant, expressive yet also subtle palette that seems every bit as eloquent as anything you might see from a similarly priced DLP projector. Unlike some aspects of the TW4400’s picture setup, moreover, I found its colours – even tricky skin tones – to be pretty believable and subtly blended using some of the out-of-the-box presets.


The only exception, perhaps, is a slight tendency to render whites and creams with a little more red-tinged warmth than I like – something I was able to correct to my satisfaction, however, via the various colour management tools.


I’d say the recently reviewed, similarly priced Vivitek H5080 looks even more dynamic during dark scenes. But the TW4400 handles motion slightly better, and its LCD nature means it’s immune to DLP’s rainbow effect – important if you’re one of those people particularly prone to seeing this DLP colour wheel artefact. In other words, picking between the Epson and Vivitek models is largely a case of horses for courses; a matter of personal preference.


The TW4400 also show’s Epson’s usual flare for sharpness, reproducing HD material with likeable texturing and detailing, but without descending into noise or over-exaggerated edges. 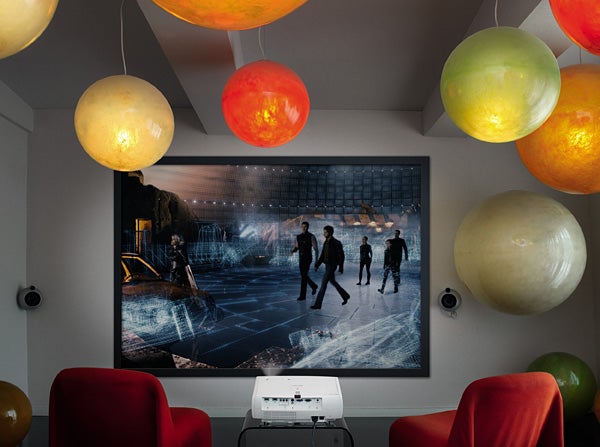 The only time the TW4400’s knack for reproducing detail deserts it a touch is with either really dark or really bright elements, both of which can seem a little crushed and ‘hollow’. As noted earlier, you can reduce this issue via careful tweaking to the point where it only appears very occasionally. But it might provide you with enough of an excuse to step up to the more tolerant TW5500.


So that I can wrap up on the positive note the TW4400 richly deserves, I’m seriously impressed by how quietly the projector runs. In its eco mode, Epson quotes just 22dB of fan noise, and this is entirely borne out by my experience of it in action, as I hardly noticed it was there even when sat quite close to it while running a near-silent film scene.


Perhaps as a side effect of this, the projector runs hotter than most. But hey – that might be just the job if we end up having the sun blotted out this summer by clouds of ash…


Epson has come up trumps once more with the TW4400, providing a more than satisfying alternative to DLP at yet another step-up level of the projector market. That said, initially I have to admit I was slightly inclined against giving it a TrustedReviews Recommended rating on account of its £3,000 launch price, which feels slightly too high.


But now that I’ve found it going for a whole £500 less, my reservations have disappeared, leaving me able to commend it as an impressive and startlingly ambitious LCD alternative to Vivitek’s DLP-based H5080.