Sorry high quality projection fans, but the TW3600 we’re looking at today is not one of Epson’s new ‘Reflective LCD’ projectors. These projectors, which impressed us so much at the IFA show earlier this year, now look like they’re going to be delayed until the new year.


So in the mean time, we thought we’d run our eye over one of Epson’s new standard LCD projector models: the distinctly affordable EH-TW3600. Especially as this new model has a couple of seriously eye-catching numbers on its spec sheet.


Most striking of all is an extremely high brightness output of 2,000 Lumens. This figure immediately raises both expectations and concerns about the projector’s likely performance potential. On the plus side, it raises the possibility of being able to watch its pictures in at least a little ambient light – something that will likely make it a hit with casual users after an occasional projector for watching the odd movie or sporting event. On the down side, we have to wonder if such an affordable high-brightness projector will be able to deliver much of a contrast performance as well. 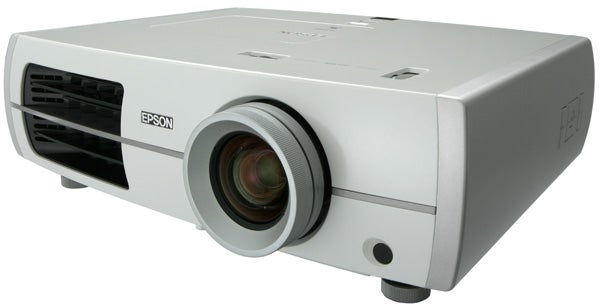 Which brings us neatly to the second eye-catching figure on the TW3600’s spec list: a claimed contrast ratio of 50,000:1. These figures always need to be treated with a hefty pinch of salt, of course. But the 50,000:1 number is high enough to at least raise hopes that the TW3600 really will be able to deliver a decent black level response as well as some presumably very punchy bright stuff.


As you would expect with a budget LCD projector, the 50,000:1 contrast figure depends on an auto iris system built into the TW3600’s optics. This is switchable between normal and high speed modes, or it can be deactivated if you’re not comfortable with its automatic adjustment of the amount of light emerging from the lens.


More brightness flexibility comes from the option to run the projector’s lamp in Normal or low-power modes, while other picture adjustments are strikingly numerous considering how affordable the TW3600 is. Among the highlights are a series of Kelvin-based colour temperature settings, a gamma adjustment, options to adjust the offset and gain of the red, green and blue colour elements, and a colour management facility allowing you to tweak the hue, saturation and brightness of red, green, blue, cyan, magenta and yellow colour components.

Add to this a 2:2 pulldown processing option, three different noise reduction levels and a Super White tool for boosting white levels, and you really do have a projector of startling calibration flexibility for its position in the market.


It’s also very easy to physically get an image from the projector correctly positioned on your screen or – noooooo! – white wall. The main reason for this is the provision of decently flexible vertical and horizontal image shifting wheels, and a brilliantly wide x2.1 optical zoom. There are a couple of screw-down feet under the front edge too, but we’d suggest you try and avoid using these – on the grounds of preserving image geometry – if you can, and stick with the image shift wheels.

The TW3600’s connections don’t advance in any way on those of previous models in Epson’s projection range. But that’s not to say they’re bad, including as they do two HDMIs, a component video input, a composite video input, a D-Sub PC port, an RS-232 port allowing for the TW3600 to be integrated into a wider AV control system, and even a 12V trigger output that can be used for, say, firing up an attached motorised screen.


First impressions of the TW3600’s pictures are, it has to be said, a tad underwhelming. Not so much because they’re actually bad; in fact they’re pretty good in some ways in the context of the £1,300 projector sector. But rather because they don’t actually seem to advance in any significant way on previous comparable Epson projectors.

In fact, when it comes to our favourite picture element of black level response, the TW3600 actually feels slightly worse than some previous equivalent Epson models. Dark scenes exhibit a noticeable bluish-grey tinge that no amount of tinkering with the projector’s colour calibration aids can sort out.


We also felt that with pictures calibrated to optimise contrast and black level response, the TW3600’s image didn’t feel as dynamic as we would have liked, with a bit too much brightness taken out of the light parts of predominantly dark scenes, and colours feeling a touch muted.


Interestingly, the TW3600’s pictures only really come to life when you push up the brightness, contrast and colour settings. For although this leads to an inevitable reduction in black level depth, colours look stronger and more realistic, and the image generally looks much more satisfyingly dynamic.

This reinforces our suspicion when we first clocked the TW3600’s spec sheet that it’s designed fairly specifically with casual users in mind, rather than die-hard movie fans looking to indulge their habit without spending too much cash.


In other words, its pictures appear to have been calibrated to look their best in a non-blacked out room. We’re not saying you can get away with running it with all the curtains open on a sunny day or anything, but its colours and brightness certainly make it unusually accomplished for its level of the market when you’ve got dimmed lights on, or a bit of light coming in from around your curtains. Which is, of course, ideal if you anticipate that you will mainly be using the projector in a social way, for movie or sporting events parties, or you just have a large family including a youngster or two, where having a completely blacked out room isn’t practical.

As well as its high brightness and intense colours (if you stick with the projector’s relatively dynamic settings), the TW3600 enjoys very strong sharpness and detailing, thanks to its full HD resolution and some clearly solid image processing. It handles motion quite successfully for its money too, suffering with relatively little judder despite not having the same sort of motion processing circuitry sported by Epson’s flagship projectors.


One final strength is that the projector runs surprisingly quietly for such a high-brightness model, even if you use its lamp on its highest ‘normal’ setting – something we’d actually recommend given the projector’s apparent preference for being run at potent brightness levels.


The TW3600 is in some ways a disappointment. It doesn’t show the usual clear picture advances over previous models that we usually find with Epson’s home cinema projectors, and its focus on working in casual environments doesn’t really suit the die-hard home cinema fan in us. That said, it actually caters for its clearly casual target market very well, and even a ‘treading water’ projector from Epson is worth an audition. We just wish the brand would hurry up and send us its truly amazing-looking Reflective LCD models already…