Right now would appear to be a damn fine time to be thinking about buying a budget projector. For hot on the heels of very respectable budget DLP Full HD projectors from Optoma and BenQ comes an only slightly more expensive little star from Epson: the TW2900.


The first thing to say about the £1,100 TW2900 is that it uses LCD rather than DLP technology – a fact which will become very significant in performance terms, as we’ll see later on.


Another up-front observation about the TW2900 is that it’s a much larger unit than we’re used to finding at the budget end of the market. In fact, it occupies the same footprint as Epson’s hugely impressive flagship projector, the TW5500.

This might not endear it to people wanting something they can take around to friends’ houses or put into storage when they’re not using it. But the cinephile in TrustedReviews can’t help but hope that the size reflects an uncompromising approach to the projector’s optics and cooling systems. In any case, the TW2900 actually wears its bulk rather charmingly, as a perky white finish and boldly large lens array do their best to hide what’s essentially some pretty basic sculpting.


The TW2900’s rear plays host to a respectable set of connections, including the increasingly de rigueur two HDMIs. Plus there’s a 12V trigger out for driving a motorised screen, and an RS-232C port for system integration, alongside the more typical S-Video/composite video/D-Sub PC options.

Setting the TW2900 up immediately reveals an unexpected but seriously welcome surprise: the projector retains the optical horizontal and image shift ‘wheels’ on its upper edge that we also loved so much on the TW5500.


This is hugely helpful when it comes to positioning your projector, even if you’ve got a seriously odd-shaped room to work with. It should also save people who want to use a budget projector from the back of their room from the ignominy of having to prop the back end of the TW2900 up on magazines – something such people probably would have to do with both the BenQ W1000 and Optoma HD20.


There’s an important picture quality aspect to the optical image shifting, as well. For being able to move the image around optically, particularly up and down, means there’s far, far less chance that you’ll need to employ any keystone adjustment to get the edges of your picture looking straight. And no keystone adjustment means no digital distortion of your pictures.

Yet more good installation news finds the TW2900 sporting a superbly flexible 2.1x level of optical zoom, and a surprising amount of image adjustments within its simple but effective onscreen menus.


Among these features are: a large and genuinely helpful selection of clearly labelled colour mode presets; a gamma level adjustment; low and normal lamp levels; a six-level skin tone adjustment; a Kelvin based colour temperature adjustment; the option to turn an auto iris off or leave it set to Normal or High Speed settings; a noise reduction routine; Epson’s own processing for boosting white colours; and last but by no means least, not one but two colour management tools.

One of these allows you to adjust the hue, saturation and brightness of the red, green, blue, cyan, magenta and yellow colour components, while the other is for tweaking the offset and gain for the red, green and blue colour elements. Using these tools I really was able to get pleasingly close to the video-friendly colour tones established by our resident HD Basics Digital Video Essentials Blu-ray.


Other specifications worth running by you are a high claimed colour light output of 1,600 Lumens, a respectable claimed dynamic contrast ratio of 18,000:1, PixelWorks processing to deliver better scaling of standard definition sources, and a claimed running noise of just 22dB. Regarding this latter figure, I can happily say that the TW2900 is one of the quietest budget projectors I’ve ever heard. Or not heard, as the case may be! In its Eco lamp mode, in fact, this projector is pretty much impossible to hear, even during the quietest of scary movie build ups. 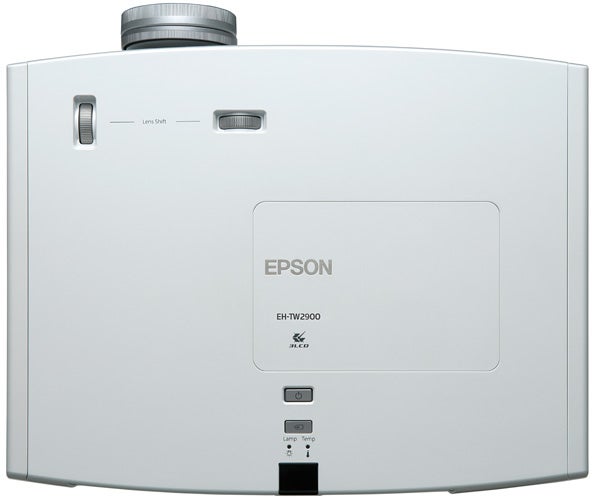 The first thing that strikes me about the TW2900’ s pictures, meanwhile, is how refreshing it is to watch a budget projector without having to contend with the rainbow effect found with rival DLP technology (on account of DLP’s colour wheel). For while neither the BenQ W1000 nor Optoma HD20 projectors suffer unbearably badly with the rainbow effect, it still makes its presence felt under the right circumstances. Being able to watch even the notoriously tough-on-DLP black and white sequence at the start of ”Casino Royale” without seeing stripes of pure colour flitting around over bright picture elements actually feels like a relief!


The TW2900 also delivers a natural colour tone, especially if you use one of the Theatre colour presets. Personally, I went with a marginally tweaked version of Theatre Black 2, seeing as I test projectors in a completely dark room. But if you have the slightest bit of ambient light around, or you just prefer a bit more dynamism and colour vibrancy to the black level depth I was pursuing with the Theatre Black 2 setting, then the standard Theatre or even, at a push, the Natural settings aren’t bad places to start.


The Dynamic mode doesn’t really cut it with a decently dark room, as it pushes colours into cartoon land and emphasises brightness at the expense of too much black level. But it does show off the projector’s brightness potential, and in doing so produces a picture that a casual user could still enjoy in a really quite light room.

The TW2900’s motion handling quite impressed me too, as moving objects and camera pans slide by with slightly more clarity and fluidity than you get with either of the budget DLP models I keep referring to. Obviously, you can get better motion still by spending more on a projector, but for £1,100, the TW2900 does really well.


The TW2900 also does a slightly nicer job of upscaling standard definition sources than its DLP rivals, with less noise and a slightly crisper finish.


Oddly, despite having a Full HD resolution, the TW2900 doesn’t extend this flare for sharpness into the HD domain as successfully as I would ideally have liked. I’m not saying HD pictures actually look soft; they don’t. But nor do they look as crisp as they might. Indeed, for my money the BenQ W1000 makes HD look slightly more defined.

The TW2900 also doesn’t deliver the same degree of colour saturation as the DLP models – especially the very vibrant BenQ. The Epson’s slightly more restrained colour palette is arguably more refined, but refinement might not be what everybody at the budget end of the projection market is looking for!


Part of the reason the TW2900 doesn’t produce such dynamic colours as the DLP models is, I suspect, the fact that its black levels aren’t quite as deep. Don’t get me wrong; the TW2900’s black levels are outstanding by the standards of our general experience with cheap LCD projectors, and dark scenes do contain a surprising amount of subtle, depth-giving shadow detail. But there’s definitely a slightly greyer look to dark parts of the picture, which can slightly ‘level out’ shots containing a mix of bright and dark material.

Given that I’ve compared the TW2900 so regularly with the Optoma HD20 and BenQ W1000 budget DLP models, I guess I should conclude by saying that the Epson doesn’t sport built-in speakers.


Clearly, this is utterly irrelevant to anyone wanting a projector for even a slightly serious fixed home cinema system – and it arguably proves where the TW2900’s ambitions truly lie. But it’s another difficulty really casual users might face if they’re thinking of just getting a projector out of a cupboard for occasional special sports events, or they want a projector they can easily take around to other people’s houses.


I somehow contrived to finish the main review on what felt like something of a downer. But this really isn’t a fair reflection of the Epson TW2900 overall. For while it might not have the brassy casual appeal of Optoma and BenQ’s recent mega-cheap DLP models, it certainly does have the setup flexibility (especially the image shifting), features and refinement to appeal to a more serious movie-loving audience. Which is no mean feat with such an affordable model.


Plus, of course, if you’ve been looking at the Optoma and/or BenQ models and found that you’re particularly susceptible to seeing the DLP rainbow effect, the simple artefact-free nature of the TW2900’s pictures will feel like the home projection equivalent of taking a Nurofen.