We weren’t entirely sure what to expect of the LS10000’s images. In the past, laser technology hasn’t always delivered true cinematic images, especially when it comes to colour balance and black level response.

We also had our doubts over paying £6,000 for a projector that doesn’t offer native 4K playback. So it’s a testament to just how far Epson has come with the technology that the LS10000 can stand up superbly against competition as accomplished as the JVC DLA-X700R and the Sony VPL-VW300ES.

The biggest revelation is the LS10000’s black level performance. This really is stellar, achieving black colours that are almost completely free of any low-contrast greyness and uniformity errors. This relies on having the image settings configured for dark room viewing conditions.

In comparison to the rivals, the LS10000’s blacks get deeper than they do on the Sony VW300ES, but fall marginally short of those of the JVC X700R. And anything that gets even close to the X700R’s black levels can be classed as a major success. 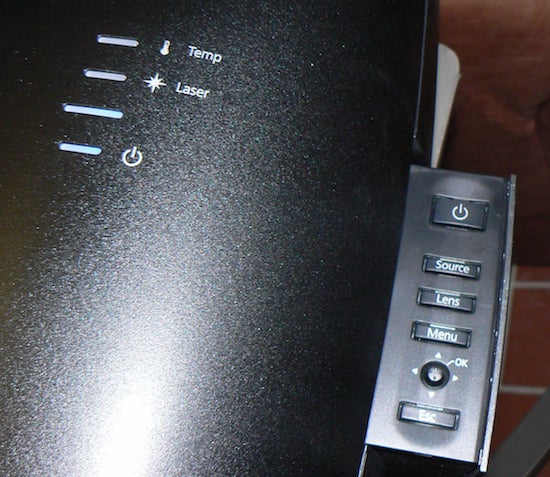 The luminance levels in these wonderfully contrast-rich pictures look completely stable too, so long as you’ have the Dynamic Contrast feature turned off. This combination of deep blacks and luminance stability is another tick for the LS10000 over the Sony 4K model, and again reminiscent of the stability JVC achieves with its dynamic iris-free D-ILA technology.

Also impressing us more than expected is the LS10000’s Super Resolution 4K feature. This does a good job of converting HD sources to the projector’s pseudo-4K output, adding palpable pixel density and, even a slight sense of extra detail and texture. What’s more, it does this without exaggerating noise in the source or – as long as you apply restraint with the Detail Enhancement’s Range setting – causing sharply contrasted edges to look forced or “ringed”.

Particularly outstanding is how well the upscaling system deals with grain in movies. It seems able to recognise the difference between natural filmic grain and noise, taking out the latter while leaving the former intact without making the picture look processed or “meshy”.

The upscaling isn’t a substitute for a true native 4K image, however. A 4K source on the Sony VW300ES will still give you a next-generation sense of detail and depth – that feeling that you’re looking through a window rather than watching a projector. Nevertheless, the LS10000’s upscaling is good enough to allow it to be thought of as more than merely an HD projector.

Feeding the LS10000 some of our native 4K sources left us feeling less impressed. Our 4K footage clearly lacked the detail, depth and sheer “window on the world” snap that we’d expect to see with a true 4K display.

The LS10000 is to be congratulated for its handling of motion, though. Objects pass across the screen smoothly and camera pans are handled with aplomb, without any help from the Frame Interpolation system. Even when the motion is multidirectional – during Sandra Bullock’s spin through space after the shuttle disaster in Gravity, for example – the LS10000 does a fine job without succumbing to excessive judder, stutter or lost detail.

One final achievement of the LS10000 is its colour performance. It produces colours that enjoy a gorgeous combination of tonal subtlety and impeccable balance. There’s none of the excessive greenness, blueness or paleness noted with laser-based video solutions of past. Even if you drive the projector hard in bright-room conditions, colours retain their authenticity and neutral balance – something other laser solutions have struggled to do.

It was also a relief to find the LS10000 completely free of the sparkling, shimmering interference that was once an unfortunate side effect of early laser AV technologies.

For all its overall brilliance, though, the LS10000 isn’t without its issues. First, it isn’t a particularly bright projector, especially when it’s set up to deliver minimum running noise and the most convincing black level and colour response. This resulted in lost shadow detail in dark areas when using the projector on its Eco lamp setting. This led us to prefer the Medium setting, even though this reduces the lamp life a little and leads to a rise in running noise.

The LS10000’s biggest issue, though, is its lack of native 4K and High Dynamic Range support. While these may be understandable, given that Epson’s projector is pushing the tech envelope in other areas, considering the the sudden surge in 4K and HDR interest, the timing of LS10000’s launch seems unfortunate.