The EH-LS10000 is Epson’s most exciting projector for years. And while its £6,000 asking price doesn’t deliver a native 4K resolution such as Sony’s VPL-VW300ES, it does get you Epson’s Reflective LCD and new solid-state dual-laser technologies. A combination that has the potential to be a match made in home-cinema heaven.

Aside from Sim2’s Ferrari-resembling Lumis models, the LS10000 is one of the best-looking projectors we’ve laid eyes on. Admittedly, it’s huge: weighing 20kg, it covers even more table space than its JVC DLA-X700R and Sony VW300ES rivals. But it wears this hugeness exceptionally well thanks to its sculpted curves, the sleek matte-black finish, and the gleaming ring around the large, centrally mounted lens.

Connections are found on its rear, under a detachable panel, and rate as more than respectable by projector standards. They include a couple of HDMIs, two 12V triggers, plus RS232 and Ethernet LAN support for control system integration. 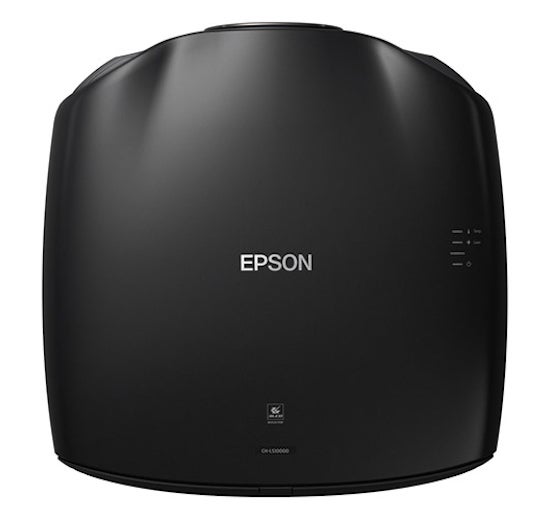 The HDMIs are interesting. For although the projector carries only native Full HD LCD chips, one of the HDMIs supports the new HDCP 2.2 4K-friendly anti-piracy system. Both support 4K playback at 60fps – not just 30fps.

So why bother to take in 4K sources – which are instantly reduced to HD for their run through the projector’s image processing – when your LCD panels are only HD? Because the LS10000 claims to deliver a 2,160-line output image, achieved by doubling its frame rate and shifting the second version of each frame half a pixel across and up from the original frame.

This approach is reminiscent of the e-Shift 4K system JVC uses on its projectors to deliver a 4K effect despite the fact that its D-ILA chips are actually only HD. JVC made its system work well on the X700R, so hopefully the LS10000 will also end up delivering pictures that look more “pixel dense” than those you’d get from a straight HD projector.

At the same time we’re not expecting the LS10000’s “4K” images to deliver the same detail and clarity you get with Sony’s true 4K VW300ES. Obviously this is something we’ll be looking closely at in the performance part of the review.

The LS10000’s key selling point is its use of laser technology to produce its pictures. It creates its images by firing a blue laser along two different optical paths: one delivering blue after passing through an optical diffuser; the other generating first yellow by bouncing off a phosphor wheel, and then red and green from the yellow via a dichroic mirror.

Opting for laser is worthwhile for a number of reasons. First it does away with the age-old problem of limited bulb lifespans. Where a typical UHP bulb might last you up to 4,000 hours, the laser-driven light system in the LS10000 is said to last for 30,000 hours.

What’s more, the laser system should prevent image quality dropping off over that 30,000 hours anywhere near as much as you’d expect over the lifespan of a normal bulb. The 30,000 hours equates to 20 years of use, even if you watch your LS1000 for four hours a day.

Using lasers also means you can turn the projector on and off more quickly, without the usual protracted warm up/cool down processes of normal lamp projectors.

The LS10000 adjusts its brightness via the lasers, rather than using a dynamic iris to control light output, which should also lead to quieter running, as well as a potentially greatly expanded contrast ratio. After all, in theory, the projector could just shut off its lasers to achieve a true black colour, and lasers are capable of responding faster than a dynamic iris to changes in image content.

Finally, the use of lasers potentially opens the door to brighter images. Certainly, this aspect of laser technology is causing plenty of excitement on the commercial cinema circuit right now, although the light output of the LS10000 is only quoted as 1,500 Lumens – a figure that’s only slightly higher than that of JVC’s DLA projectors. It will be interesting to see how such a figure translates onto our screen, especially since the laser-sourced light will be passing through Epson’s Reflective LCD technology.

First unveiled in 2010, Reflective LCD looked set to represent a huge step forward for LCD as a projector technology, thanks to the way it could deliver a much superior contrast performance to the usual transmissive LCD chipsets. Sadly, though, Epson ultimately bailed on the technology, seemingly because it couldn’t then produce the Reflective LCD systems in sufficient quantities to make them financially viable.

So we’re pleased to see the technology returning to the fray, now with its laser illumination companion in tow.

Aside from not having a native 4K resolution, the specifications offered by the LS10000 are eye-catching. Alongside that 30,000-hour “lamp” life, it claims a contrast ratio of more than a million to one and a colour range that’s able to stretch to both the DCI-P3 and Adobe RGB standards. The P3 colour range raises the prospect of support for the new HDR picture standard starting to hit the AV world, although Epson wasn’t able to confirm that any such compatibility would be possible.

The huge images that projectors can deliver continue to make them the best ways to watch 3D – so long as they do a good job of it, of course. So it’s pleasing to find that the LS10000 not only supports 3D playback, but includes two pairs of active 3D glasses for free.

Setting up the
LS10000 is a joy. The image can have its size, focus and position
adjusted from the remote control with exceptional precision, and the
2.1x optical zoom and vertical/horizontal image-shifting functions both
offer impressive flexibility.

As you’d expect of
such a high-end projector, the
LS10000 works hard with its picture settings to cater for pretty much
every kind of taste and room situation.

At the most basic level,
this finds a series of themed picture presets: Living Room, Cinema,
Natural, Dynamic Digital Cinema and Adobe RGB. In addition,you’ll also find gamma settings, full-colour and white-balance
management (which covers the CMY secondary colours as well as the RGB
primaries), a skin-tone adjustment, a series of static settings for the
projector’s iris,
and a Dynamic Contrast option that adjusts the picture’s luminance in
response to a continual assessment of the image content.

Epson also provides a fairly comprehensive suite of
controls when it comes to the LS10000’s video-processing tools. These
include multiple levels of strength for both a Frame Interpolation “motion smoothing’” circuit and the 4K upscaling system. Alongside the ability to upscale to 4K at five different levels, there’s a
separate Detail Enhancement tool that allows you to tweak the range – actually edge enhancement – and strength of the detail processing.

You can also opt to turn off the 4K upscaling if you find the processing distracting.

For setup, we’d recommend you leave the Dynamic Contrast
feature off, since it can cause the image to flicker. Also, use the
Super Resolution 4K setting on 2 – or 3 at a push – since level one
leaves the image looking rather soft, while four and five start to make
it look noisy. Turn off the Frame Interpolation system
for 24p movie viewing, as it can generate the occasional processing
artefact and the projector is good enough with motion in its native
state not to need any help here.

There was some debate
internally about whether to use the Eco or Medium Power Consumption
luminance setting for dark-room viewing.

Some favoured the Eco
mode, which runs almost silently and delivers the maximum life for the
laser lighting system. Others felt they could live with the
reduced lifespan and slightly higher running noise of the Medium setting
in return for its slightly punchier images. Given that there seems to
be a little crushing of shadow detail in Eco mode, however, we ultimately
settled on the Medium mode for most of our viewing.