With TV news relatively thin on the ground IFA 2017, there was more space for home cinema projectors to shine. And for me, the all-round most exciting projector of the entire show was Epson’s EH-LS100.

Nobody could be more surprised about this than me. After all, the EH-LS100 fails to support two of my favourite things: 4K and high dynamic range (HDR) playback. What it does do is take the idea of using a projector to replace a massive TV in a brilliant and strikingly affordable new direction.

It does this by combining three key attractions. First, it features an ultra-short-throw design. Second, it uses a laser projection engine. Third, remarkably for a laser projector, it costs just £2,500. 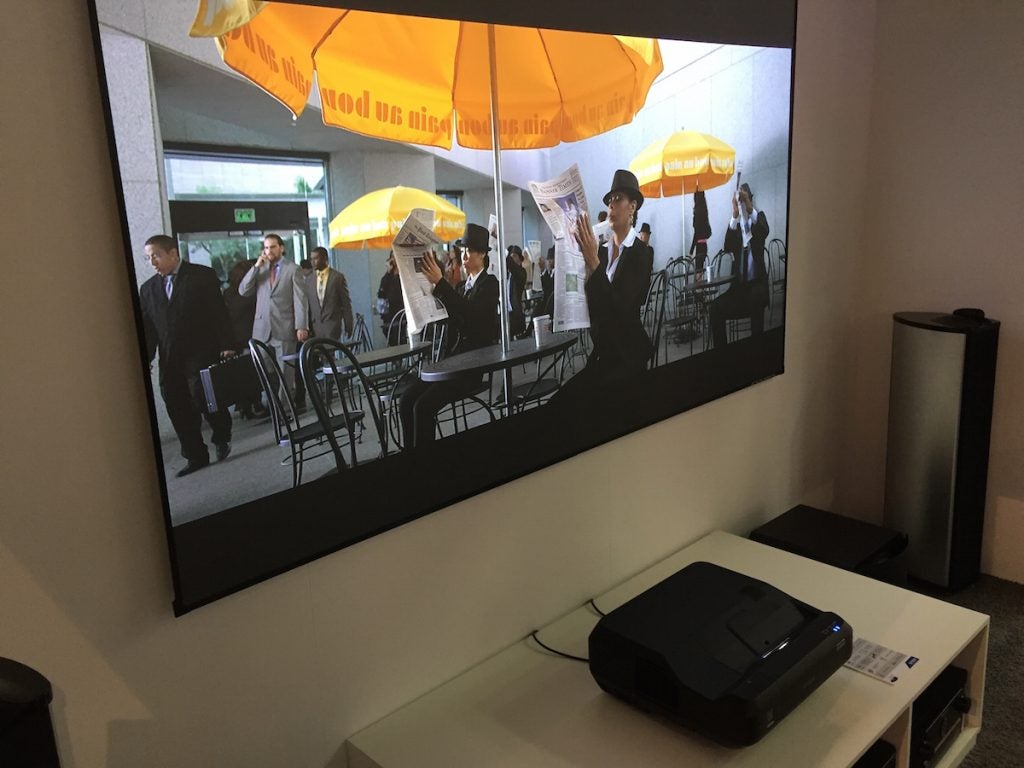 The ultra-short-throw optical system lets you enjoy a 70-inch picture with the projector positioned just 6cm away from a wall or screen. The picture can stretch to 130 inches if you can find an extra few centimetres of throw distance.

This means that, unlike most projectors, which end up taking over the middle of your room, you can set the LS100 on a sideboard – a critical factor in making a projector deliver a TV-like experience.

The laser lighting delivers an estimated lamp life of 20,000 hours and instant switch on/off – two more TV-aping features. Plus it’s rated to deliver a claimed 4000 lumens of brightness and a colossal dynamic contrast ratio of 2,500,000:1 – numbers that potentially make it much more watchable in ambient light than typical projectors.

Finally, £2500 looks pretty incredible for a laser projector – even one that’s only got Full HD resolution with no HDR. And it’s a price that’s become even more enticing now I’ve experienced at IFA what the LS100 is capable of.

Not that it makes a particularly awesome first impression. Its design is more functional than glamorous, with a dull matte grey finish and sculpting that can politely be called ‘random’. It looks much more like something you’d find in a classroom or boardroom than a living room.

Such is usually the way with ultra-short-throw projectors, though. Even the megabucks Sony VZ1000ES is no oil painting. So let’s focus on what really matters: the LS100’s performance. 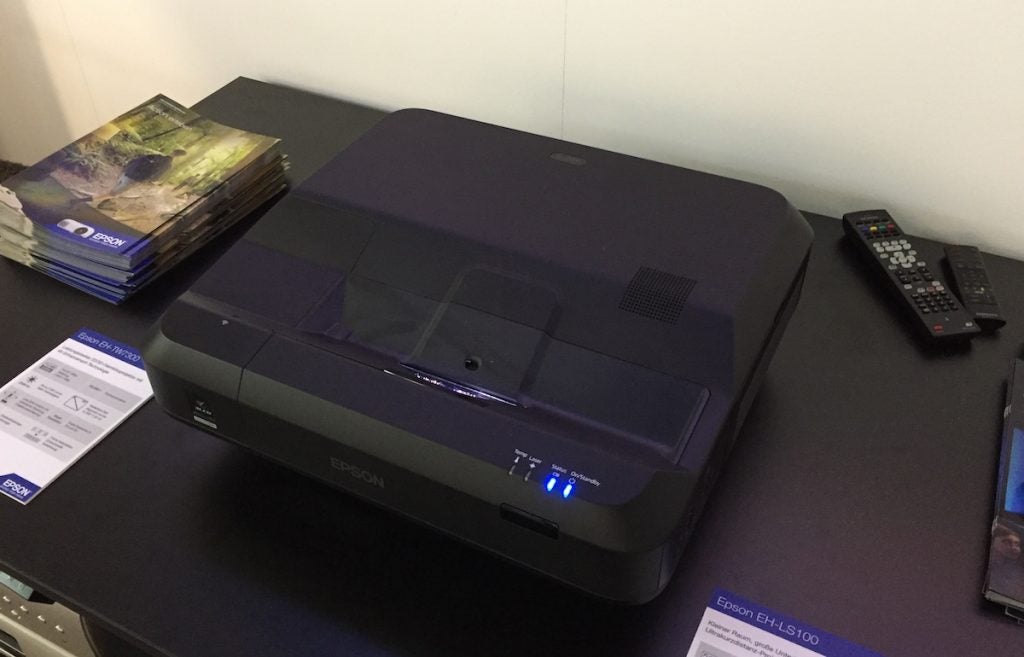 Epson had bravely decided not to place its LS100 demonstration models inside its IFA stand’s blacked-out cinema room. Instead they were just out doing their thing in the open, only shielded from the worst of the show lighting by a false, living room-height ceiling. Despite the ambient brightness they were thus having to contend with their pictures still looked remarkably watchable. In fact, not just watchable – actually properly enjoyable.

For starters, the projector pumped out the animated images of The Secret Life Of Pets with frankly astonishing amounts of brightness and dynamism.

The white fur of Snowball the badass rabbit actually looked more intense than it does on many dark-room projectors I’ve seen, while less extreme colours also stand out with a richness and vibrancy that makes it hard to believe you’re watching a projector rather than a TV. The horribly flat, washed-out colours usually associated with watching projectors in ambient light just aren’t there. 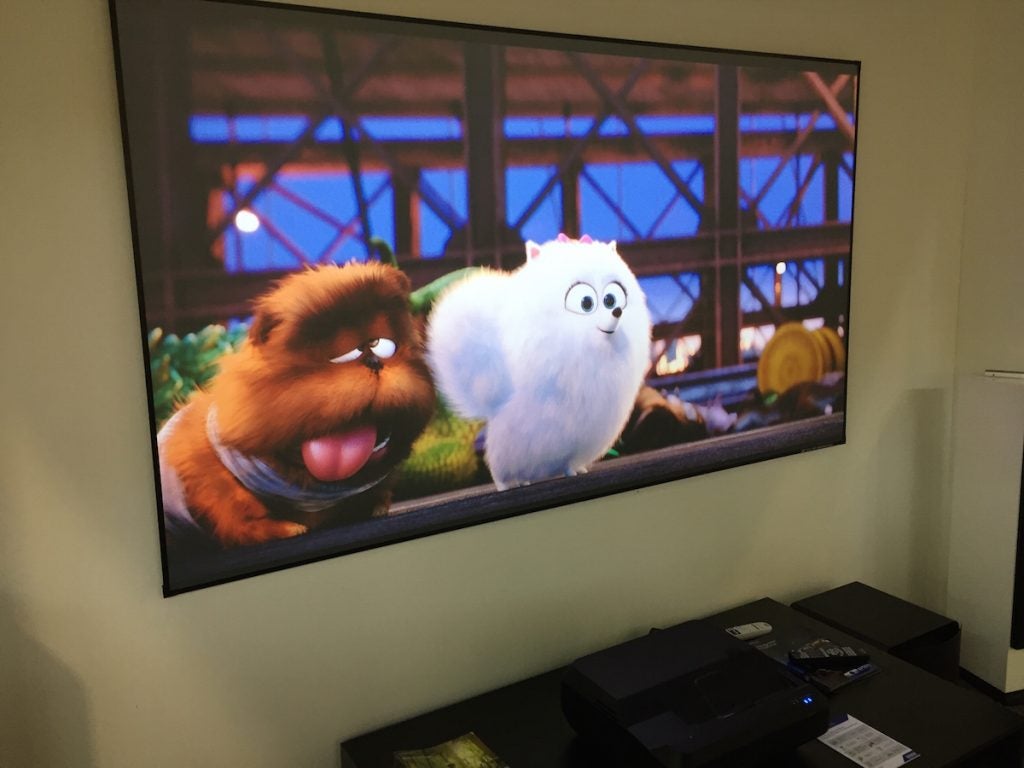 Even more startling is how the ambient light-puncturing brightness is accompanied by a genuine sense of contrast. Typically, projectors lose all black level response in bright conditions. The LS100’s brightness and laser-driven light manipulation, though, is so intense that it actually manages to create an engaging sense of blackness in dark picture areas.

During a music video containing lots of people in black suits dancing against a bright background, those suits actually looked black, rather than flat and grey. You could even see some subtle light and tone detail in the suits.

Generally, detail was another strength of the LS100’s images on show at IFA. The projector appeared to wring out every last pixel of The Secret Life Of Pets Full HD Blu-ray resolution, and it did so without making the image look grainy or stressy. There didn’t seem to be any of the shimmering noise sometimes seen with laser projection, either.

Finding anything like this level of ambient image performance on a £2500 projector is unprecedented, and can only be down to its laser engine.

Walking up close to the LS100, meanwhile, revealed one further benefit: quiet running. So far as I could tell against the hubbub of the IFA show floor, it didn’t seem to be kicking out much cooling noise at all for such a bright projector.

There are a couple of important riders I need to add to this hands-on. First, I couldn’t test it in a dark room to see how well it might adapt to proper lights-off ‘movie nights’.

Second, it was being used in Epson’s demonstrations with what appeared to be a pretty serious ‘ambient light’ screen from Elite Screens. Getting a screen similarly effective combatting ambient light could set you back another £2,500. So obviously when we review the LS100 fully, we’ll need to see how well its TV-challenging images hold up on a more affordable, ‘normal’ screen. Or even a wall.

This is one review sample I’m particularly looking forward to receiving ahead of its November launch. This level of picture performance – in ambient light no less – is just the sort of kick the projection world needs. Watch this space.