There’s quite a trend among printer makers to produce bigger, heavier-weight inkjets to challenge the dominance of laser printers in offices. First HP and now Epson with its B-500DN, have produced machines claimed to be as cheap to run and nearly as fast as equivalent lasers, but with the bonus of better colour quality and lower energy use.


To be kind to the B-500DN, you would say that it had unconventional styling. To be accurate, you would say it was a monolithic printer with a big square bulge. That bulge holds the four ink cartridges and, given their size, it’s hard to see where else in the printer’s case they could go. 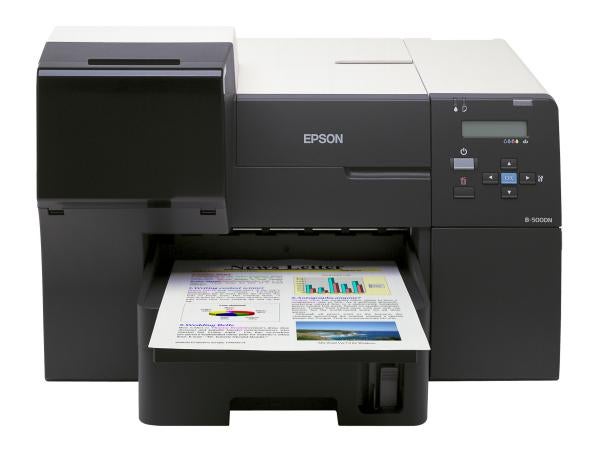 There are two paper sources in the machine, with a substantial paper cassette at the front, capable of taking a full ream of 500 sheets of plain paper and a separate feed tray under a fold up cover, which can take a further 100 sheets. You can feed photo paper through the printer too, in either A4 or 15 x 10cm sizes and, whatever the source, printed pages feed out to a tray at the front of the machine.


At the back of the printer is an oddly-shaped cylinder, which turns out to be the duplexer, so you can print double-sided pages. Also at the back are sockets for USB 2 and Ethernet connections, as the printer is network-enabled as standard.


The control panel consists of a 2-line by 16-character LCD, which has no backlight and is therefore difficult to read in normal use. There’s a diamond of five control buttons, plus two to feed paper and switch the printer on and off.


Printer setup involves unlocking the cartridge holders and plugging in four ink cartridges. The printer then performs a one-off charging cycle which takes around five minutes. Software installation is simple, as there’s only a driver and web printing utility. The driver is well specified, with support for multiple pages per sheet, poster printing and watermarks, as well as duplex print.

There’s an ISO standard being discussed at the moment to provide a methodology for testing print speeds; it can’t come soon enough. Epson claims the B-500DN is capable of 33ppm, printing black or colour pages in ‘near laser quality’ mode.


Our five page text document completed in 30 seconds and the five page text and colour graphics test was one second faster. This gives a maximum speed in the real world, including preparation time, of 10.3ppm. The company also claims a first page out in three seconds, but we didn’t see one inside 15 seconds. Even so, subjectively this is a quick printer and a good alternative to lasers in the same price range, in terms of speed. 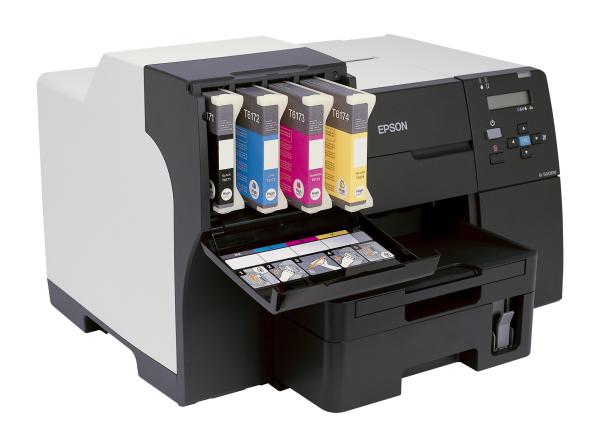 Print quality, from Epson’s DURABrite pigmented inks, is fair for an inkjet, but not for a laser. Black text is slightly ‘lumpy’, though you have to get very close to see a problem. In most environments, it would be adequate.


Colour graphics are solid, though with some dither patterning in areas of solid fill. Colours are bright, but not as robust as from a typical colour laser. However, where this machine and most colour inkjets beat a colour laser is in photo quality prints. Our 15 x 10cm photo sample shows very natural colouring and plenty of detail, both in brightly lit and shaded areas of the image. It’s better than we’ve seen from any laser printer.


At least Epson has been honest about the noise levels, quoting a level of 68dBA when printing. We measured it a couple of dBA lower than this, but either figure makes it a pretty noisy machine to have on your desk, noisier than most lasers.


Epson claims the B-500DN is cheaper to run than an equivalent colour laser and given the prices quoted for its cartridges, we have to agree. There are three different black ink cartridge capacities available, at 3,000, 4,000 and 8,000 pages. Colour cartridges come in two capacities: 3,500 and 7,000 pages.


Using the higher capacity cartridges, which also give low maintenance costs, produces page costs of 1.31p for an ISO black page and 2.67p for a colour one. Both costs are lower than from colour laser printers we have tested, but the colour cost is exceptionally low. A page with good colour coverage for less than 3p is very good for any printer and keeps the total cost of ownership well down.


Epson’s B-500DN proves that a business inkjet printer can be a direct rival to a colour laser, at the same price point. Although the asking price of £350 seems high for an inkjet, this is offset by extremely low running costs and the fact that you will only have to attend to cartridge changes every 7,000 or 8,000 pages. Print quality is good, speed is acceptable and although the printer is noisy, it shows Epson’s determination to establish a new commercial role for inkjet technology.