Personal laser printers have the advantage of simplicity and small size. If you just need to print correspondence and your main concern is good text print, a small laser like Epson’s Aculaser M1200 can save a lot of money over an inkjet printer of equivalent speed.


Imagine a large bread loaf – a tin loaf with a smoothly domed top – and you’ve got the overall shape of the M1200, though it’s twice the size. All in textured black, apart from the fold-up output tray, which is a sort of smoked olive colour, the printer has simple, practical lines. 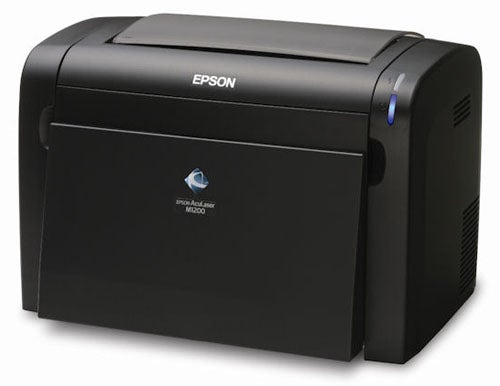 A 150-sheet input tray folds down from its front and there’s no paper cover provided, so you’ll probably want to remove and store paper when not actually printing. With the two paper trays open, the printer doesn’t look as neat, but it still has a smaller footprint than similar machines with more conventional tray arrangements.


There’s no control panel on the printer, just a couple of large LEDs – one yellow, one blue – which indicate paper jams, covers open, power and print data being received. Given the simplicity of what the printer’s being asked to do, these two indicators are adequate.


Just in case of a paper jam – though we saw none during testing – there’s a hinged cover at the top, over the fuser and another at the front for cartridge access. At the back are sockets for USB and parallel ports, though the printer has no network connection. 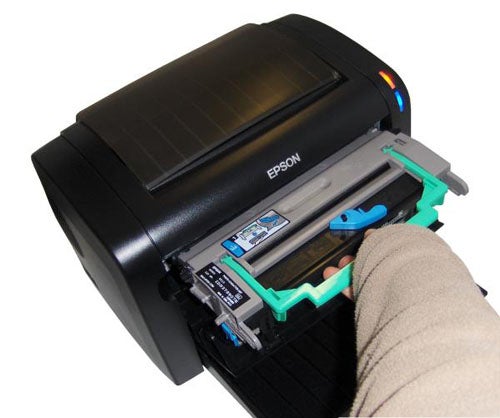 Physical setup is straightforward, as the machine uses a two-part drum and toner cartridge, with the toner hopper clipping onto the back of the drum. Supplied as a single component, it slides easily into position behind the front panel cover.


Why there can’t be more collaboration between Microsoft and printer makers to resolve this confusion for customers is hard to fathom. Most often, as here, you have to cancel the Windows driver setup in favour of that from the printer maker. On other occasions, you have to sit through two sets of file copying, of the same files, because the two setup routines are out of sync.

Epson claims the Aculaser M1200 can print a nippy 20 pages per minute, so we were a bit sceptical, given this is an entry-level device. Our five-page black text print managed just 9.68ppm, so indicating we may be right, but when we ran the longer, 20-page test, it completed in 1:16 for a speed of 15.79ppm, which is a more impressive result. OK it’s not 20ppm, but even 16ppm is pretty good for this class of machine. Subjectively, you certainly don’t feel as if you’re hanging about long.


Our five-page text and graphics print took just 26 seconds, five seconds less than the text document, since only one page-image has to be rasterised. A 15 x 10cm photo print on A4 took 13 seconds, which is also a very respectable speed.


The quality of prints is very good. Although it’s native resolution is just 600dpi, there was no sign of jagged edges to curves or diagonals and no noticeable spatter of toner in places it shouldn’t be. 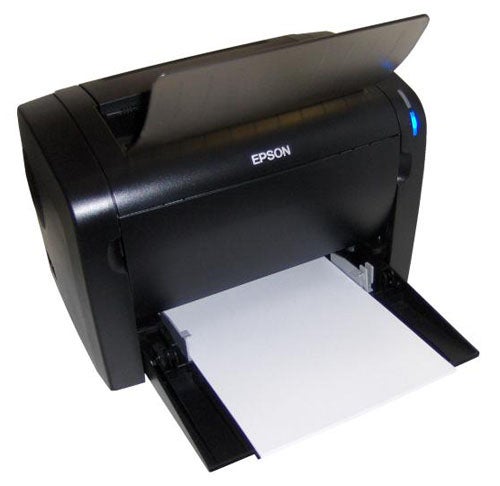 Greyscales are a little uneven, though there are enough different tones to render a wide range of colours in their greyscale equivalents. This also means that our test photo showed up pretty well. Although dither patterns are obvious, the printer still managed to render reasonable detail in both full-light and shadowed parts of the image.


Epson inkjets have a reputation for making a lot of noise when printing, but their laser printers are quieter and the quoted noise level of 54dBA is not far off the mark, making this a reasonably comfortable machine to have working on the desk beside you.


There are two costs to consider in running the Aculaser M1200: toner and photoconductor. Toner cartridges come in two capacities and in regular and Return Programme versions. Return Programme cartridges are significantly cheaper and you can feel smug that you’re doing something for the environment, too.


Using the high yield, 3,200 page toner cartridge and the photoconductor drum, which is specified at 20,000 pages, gives a cost per page of 2.97p, including 0.7p for paper. This is a little bit high, with machines like the £60 Samsung ML1915 coming in at 2.86p, but is still reasonable for its class.


The Aculaser M1200 is a good, simple mono laser printer, which prints smartly in both the speed and quality senses of the word. Given its very low price, it’s hard to find much to hold against it. Probably the only noticeable glitch is the lack of a cover for its paper input tray. Even this won’t be a problem, though, if you’re happy to stow the paper between prints.