There are a lot of colour laser printers available now, but rather fewer which are duplex-capable out of the box. Epson’s AcuLaser C3900DN is one of these, boasting an impressive claimed print speed and a design which differentiates it from most rivals.

This bulky, white and slate grey printer has an odd configuration, almost as if it’s been turned through 90-degrees from typical designs. Although its 250-sheet paper tray pulls out from the front, you load paper into it in landscape mode. It feeds up from right to left inside the printer and out onto a fold-up paper support on its top. 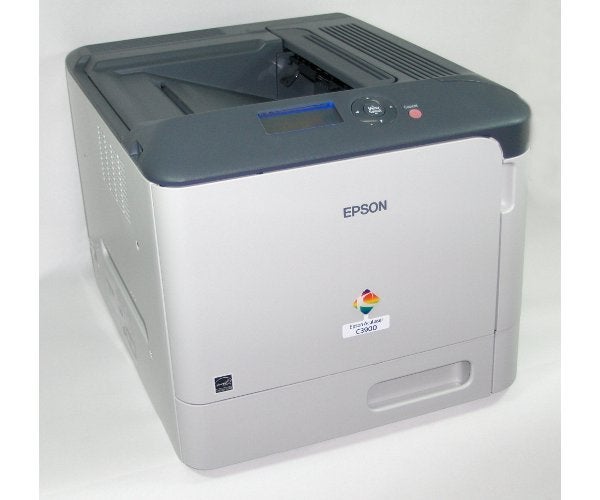 There’s a substantial, 50-sheet multipurpose tray which folds down from the printer’s right-hand side and a further, 500 sheet tray is available as an option. Controls set into the front panel consist of a four-way ring with a central OK button and a separate one for Cancel. The menu system is easy to navigate, though the aesthetic is hard to understand.

The backlit LCD display, which has four lines of 16 characters, has one of the ugliest fonts we’ve seen on a printer. It looks like vector labelling from an early CAD technical drawing and appears unfinished. There is an interesting coloured strip along the top of the display, though, which shows blue, red or purple to indicate different status conditions. 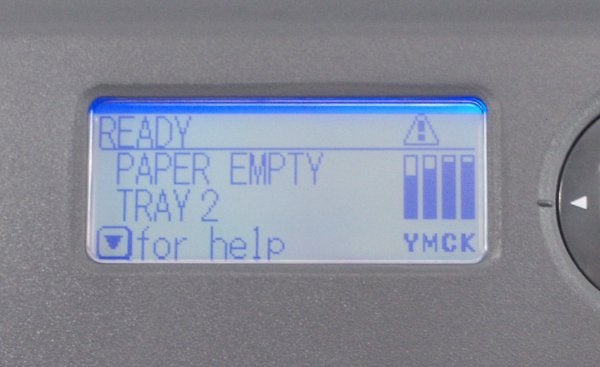 At the back of the printer are sockets for USB and 10/100 Ethernet and both PCL and PostScript L3 drivers are provided for Windows and OS X. There’s Linux support too, though you have to download this. Very little software is provided other than these drivers, but the driver includes a soft tab, where you can pull together the control functions you use most often, to speed up setting changes.

The printer’s sideways design means the toner cartridges are directly accessible from behind the front panel, making them very easy to service. There are separate drums for each colour, as well as a separate fuser and waste toner container, all of which have different life cycles, though thankfully long ones.

Epson rates the AcuLaser C3900DN at 30ppm, printing black or colour, which is fast for a colour laser and one of the reasons it costs over £500. Our five-page black text print took 43s to complete, just 7.0ppm, with over 30 of those seconds spent pre-processing, even though we’d primed the machine by printing a single page to wake it up.

Running the test again took 25s, a speed of 12ppm, still little more than a third of the rated speed. The five-page text and colour graphics test produced 14.3ppm, only a little faster. When we moved up to the 20-page, long text document, however, the printer shifted up a gear and completed it in 54s, a speed of 22.2ppm. This is much closer to the claimed speed and a good throughput for a colour laser. 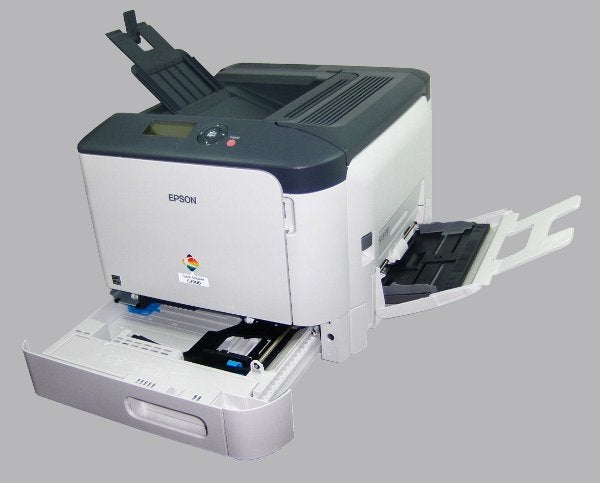 The quality of prints from the 600dpi engine in this machine is very good, with crisp black text and smooth, well-managed colours. They are quite vivid for business graphics, but still show overprinted black text clearly and with good registration. Even our test photo looked better than many, with good levels of shadow detail, reasonably natural colours and smooth gradations where needed.

Despite having four sets of consumables to consider, three of the four only need replacing occasionally, at 30,000, 36,000 and 100,000 pages. The toner cartridges also have a high yield of 6,000 pages each and the black cartridges are available in pairs, at a discounted price. 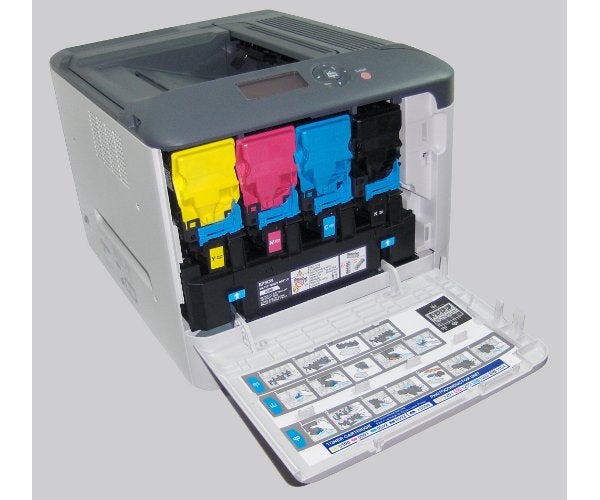 When you work through the maths, the page costs come out at 2.8p for an ISO black page and 11.6p for an ISO colour one. Both of these are very reasonable for this class of machine and although the individual consumables seem expensive, they will typically only need replacing on a timescale of months, or even years.

Despite its rather unusual design, this printer does well in most of the key areas. It prints quite quickly, though colour print is not as quick as Epson believes, and produces good quality text and graphics. It would be a fine addition to a small business or workgroup of up to 10 people. Running costs are by no means prohibitive and the asking price, given the specification, is not out of order.