Although these days it’s probably better known for its range of ink-jet printers, Epson has always been a manufacturer of laser printers, too, and latterly of colour lasers. The Aculaser C1100 is close to being an entry-level machine, but is claimed to have a surprisingly high print speed and costs under £270 at street prices. So, are you getting a bargain?


The C1100 is a large printer, though quite a lot of its bulk goes into its height. Even so you’re looking at the same footprint as a good-sized desktop (not tower), PC. Paper feeds from a tray at the bottom of the machine and exits to its top cover, with a pull-out paper support for longer sheets.


The feed tray is unusual in that it’s a 180 sheet multi-purpose tray. You open the front cover and feed the paper in – there’s no removable tray to fill. If you want extra capacity, you can fit an optional 500 sheet paper tray underneath, but that makes it an even taller device. 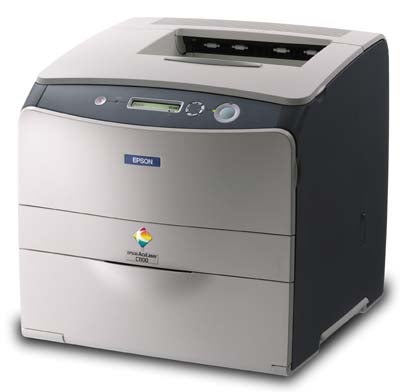 The surprisingly simple control panel angled into the front lip of the printer consists of a single-line, 16-character LCD, with four buttons to its right and a small circular cancel button to the left. There’s also a large ‘go’ button with an action LED built into it. The menu system is reasonably easy to traverse, though a second line of characters on the LCD wouldn’t go amiss and the whole display is crying out for a backlight. Given the cost of a backlit LCD and the improvement it would make to the use of most lasers, we’re surprised they’re not a standard fitting.


At the back of the printer are USB 2.0 and parallel ports, but you have to buy the N version of this model to get Ethernet connectivity. 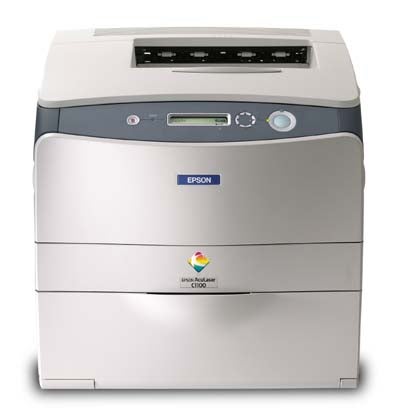 Open the top cover to fit the all-in-one photoconductor drum and fuser unit and another at the front to slot in each of the four cylinders of toner into a rotating carousel mechanism. This is deep inside the printer and fitting the cartridges is fiddly. As you print, the C, M, Y and K images are built up in turn on the drum, before being transferred to the paper.


Software provided with the Aculaser C1100 is pretty comprehensive, with Photo Quicker and Print Image Framer, as well as the driver. It seems a little odd to have two, different, photo-specific utilities with a laser printer. Although colour laser printed pages may include photo images, we wouldn’t expect photo reproduction to be a primary use of this type of printer.

The driver includes most of the usual facilities, such as watermarking for under printing ‘Confidential’ or whatever, but there’s no specific control of colour or attempts at colour matching, here. You have to rely on your application software for colour adjustments.


The received wisdom is that a colour laser printer which uses a carousel is inherently slower than one with four separate, photo-sensitive drums and toner units. It stands to reason that the time taken to turn the carousel and apply each colour individually will be longer than making up all four colour images on separate drums and applying them all to the paper in one pass. 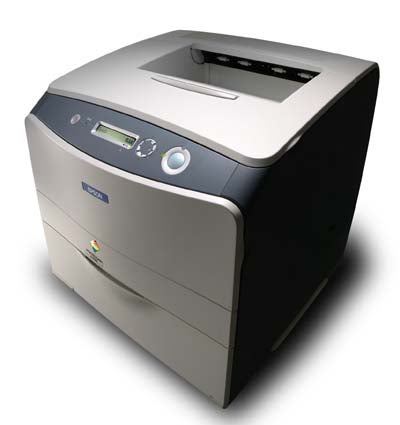 In this case, however, reason goes out of the window, as the Aculaser C1100 is one of the quickest colour lasers we’ve tested. It completed our five-page, black text print in just 24 seconds, giving a true page rate of 12.5 pages per minute. The mixed text and graphics page took just 18 seconds and our 5 x 3 inch photo took only a second longer. Compare that with other recently reviewed colour lasers, OKI’s C3100 (25 seconds) and the Samsung CLP-550 (29 seconds). The Acculaser is over 20 per cent faster, even though neither of the other printers are carousel-based.


The quality of the prints produced is generally good. Black text print is particularly clear and clean-cut, with even finely drawn fonts reproduced accurately and in good proportion. Colour graphics are also above-average, though we did see some variation in large areas of solid colour. Photo reproduction was a little over vivid, with faint banding, but the detail quality in the foreground was good and graduated tint, as in areas of sky, was reasonably smooth. 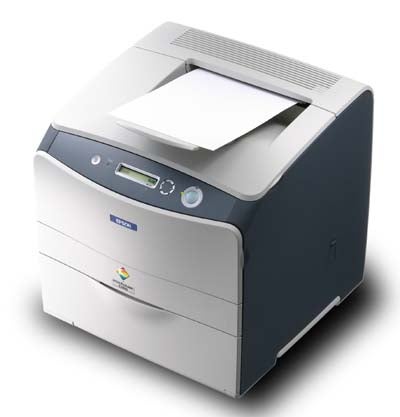 
Do the figures and you come up with a cost per five per cent black page of 2.04p, with 8.17p for 20 per cent colour. These costs are high in comparison with many of this printer’s competitors and we also found it hard to find stockists of toner and drum, so there may be less price competition. A company the size of Epson isn’t going to let you run out of consumables, but you might have to pay a bit more for them.


The Aculaser C1100 is a well put-together colour laser at a competitive asking price. As an extra incentive, if you buy one before 31st March, Epson will throw in a Stylus C66 ink-jet for free.