Earlier this week I reviewed the Seashell SS-1, a relatively inexpensive underwater case able to fit most compact cameras and dive to a depth of 40m, but with only limited camera control. As I noted in that review, there are also custom-built underwater cases for many popular compact cameras that include full control linkages, but these are usually quite expensive, starting at around £200-£250. The Epoque EHD-900 Ai is a cheaper alternative, a 45m-depth dive case that comes complete with a digital compact camera and full control linkage, but priced at under £200. There are plenty of non-waterproof cameras that cost more than that. 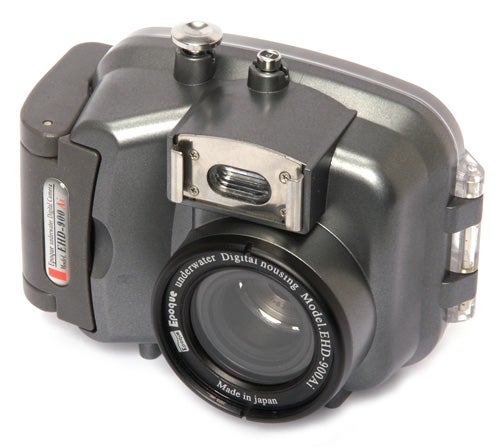 As a brand the Japanese company Epoque is quite well-known in the world of underwater photography, and makes high-quality custom cases for several popular digital cameras, including a case for the Leica M8 digital rangefinder camera that costs over £4000. Leica owners are notoriously protective of their beloved and incredibly expensive cameras, so if they’re prepared to trust them to an Epoque housing that at least should be some reassurance of quality and reliability. It also makes a range of underwater photographic accessories such as lighting units and add-on lenses, some of which can be used with the EHD-900 Ai. 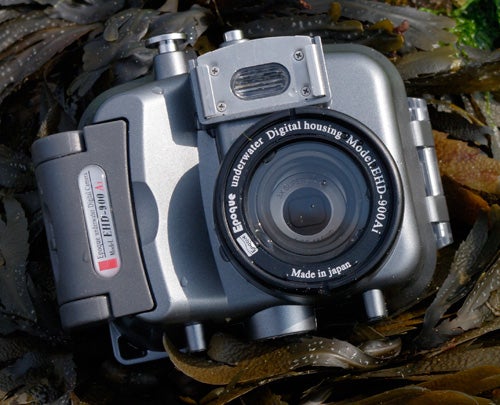 If you’re used to the sleek modern designs of most current waterproof digital cameras the first thing that will probably strike you about the EHD-900 Ai is that it is not particularly pretty. Underwater cases aren’t built to win beauty contests, but some, for example the Seashell SS-1, do at least make some token effort in the direction of fashion, with colour coordinated trim and fittings. Even among such oddly-shaped company the Epoque stands out as being uncompromisingly functional. Like most dive cases it is a two-part clamshell design made of thick polycarbonate and ABS plastic, with a glass front port a strong metal-pivoted hinge and a massive pressure latch. The back section is translucent, but the larger front section is made of plain grey plastic with no trim or colour.

The overall build quality of the EHD-900 AI housing is extremely good. The plastic mouldings are very strong, the hinges are over-engineered and very durable, and despite its somewhat lumpen appearance the case is well finished. The locking mechanism of the pressure latch is metal, and the various components are screwed together. It’s quite a heavy contraption, weighing a substantial 578g including camera, batteries and memory card, although it will just float in water with an almost neutral buoyancy of -40g. 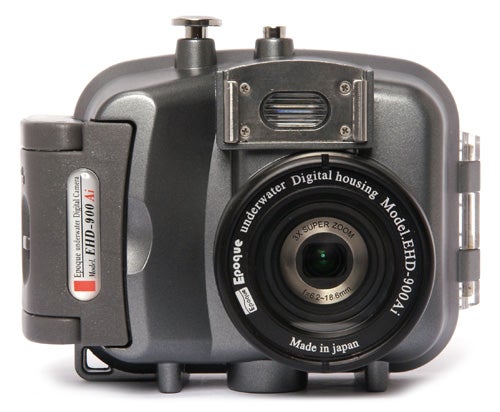 Since it is made to fit a specific camera the EHD-900 Ai has several features that the one-size-fits-all Seahell design lacks. On the front of the case the most obvious feature is the flash window. This is linked via a periscope arrangement of mirrors to the built-in flash of the camera inside, directing the flash light up and outwards. There is a metal slotted clip around the flash window designed to hold a small plastic plate with a hole in it (supplied). This accessory allows the EHD-900 Ai to be used with Epoque’s external underwater flash unit, which is triggered via a fibre-optic cable that plugs into the hole in the plate. The metal clip can also hold a filter (not supplied), necessary when shooting in deeper water because the camera inside the housing has no manual white balance control. 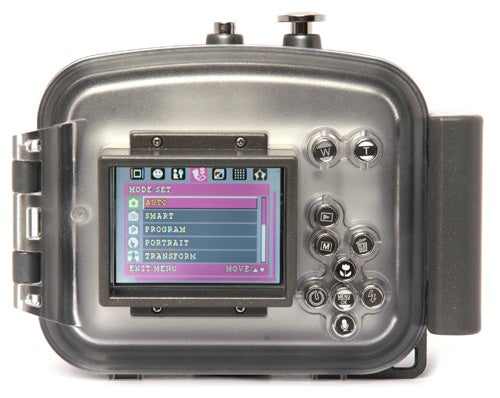 The back of the housing features a full selection of buttons including the zoom control, which connect via spring-loaded waterproof links to the buttons and D-pad on the back of the camera. The buttons are rather close together and could be a bit fiddly to operate while wearing wetsuit gloves, but they are set at different heights so it is possible to operate them by touch. The controls operate smoothly, and although I was only able to test it at a depth of about three metres it was quite easy to operate underwater.


The window on the back of the housing for the camera monitor is surrounded by a substantial shade which did help with viewing the monitor in full sunlight but which seemed to serve little purpose when submerged, and in fact made it difficult to see the screen at any angle other than right in front of the face. The shade is held on by four small screws, so it should be possible to remove it without too much trouble. 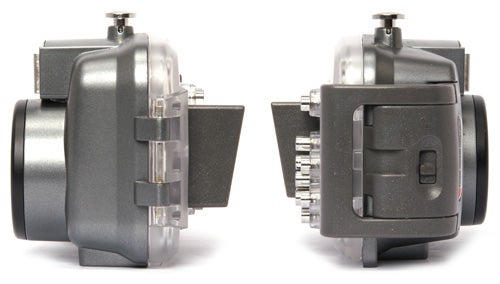 The housing comes with a small selection of accessories. There is the fibre-optic flash connector plate mentioned above, a spare O-ring seal and a small tool to help with removal and fitting, a small tube of silicon sealant grease, a bag of silica gel to help prevent condensation inside the housing, and a rather cheap-looking wrist strap. There is also a pouch and wrist strap for use with the camera should you wish to use it outside the housing. As we’ll see in a moment, you may not want to do that.

While the EHD-900 Ai housing is extremely well made and works very well, the camera inside it is unfortunately a very different story. One reason the combined kit is so cheap is that the camera is a generic 9-megapixel 3x zoom OEM Chinese product with no brand name, that on its own would probably sell for around £40, and even at that price it wouldn’t be worth buying. It is, without a doubt, one of the worst cameras I have ever seen. It is extremely slow, taking around six seconds to start up and take a picture, and it has a shot-to shot time averaging around four seconds, although that largely depended on whether or not it would focus. 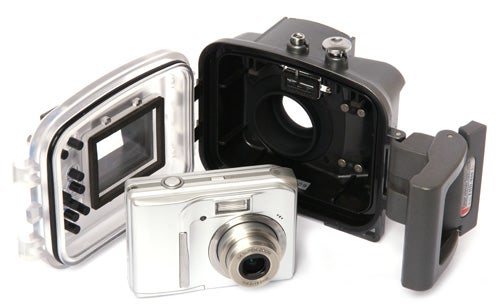 The AF system barely deserves the name. It is very slow, taking around two seconds to focus and often failing to do so even in good light, but worse still is its low light performance. In a room lit with an 80w bulb in one of those cheap wire-and-paper spherical lampshades, most digital cameras will have no problem focusing on normal objects in the room. This camera kept producing a “Low Light!” warning even when pointed directly at the lampshade. For a camera that is supposed to operate in the low-light environment 45m down in the ocean it is utterly hopeless. Its only redeeming feature is a macro focusing distance of around 5cm, but in macro mode it won’t focus at distances greater than 40cm. It has what purports to be a smart scene recognition mode, but this didn’t actually appear to do anything. 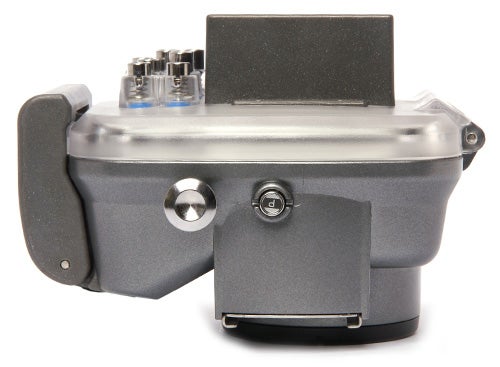 The monitor screen is very small at 2.4 inches, with a resolution of about 115k and a very limited viewing angle. Oddly it does have a good anti-reflective surface, but this is not much consolation. The menu is also incredibly primitive. It has no manual ISO setting, no white balance, and it’s not a massive surprise to discover that the limited range of scene modes does not include an underwater option. The picture quality is unremittingly awful, with massive over-compression, appalling lens distortion, chromatic aberration and corner blurring, low detail and washed-out colour. The few underwater pictures I was able to take were terrible, mostly because the camera simply wouldn’t focus. 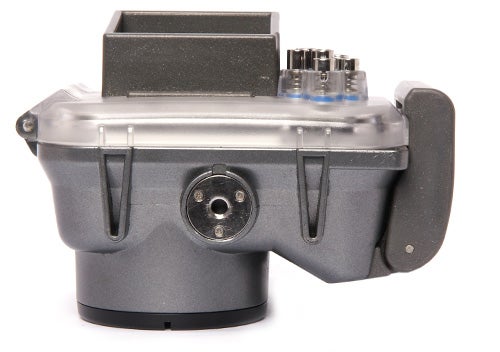 This is frankly tragic. The EHD-900 Ai housing is so good, would it really have hurt to add maybe £30 to the price and put in a better camera? Even among the brandless OEM Chinese products there are better cameras than this. As it stands it is simply not going to produce the kind of results you’d want after spending £200. You’d be far better off buying a cheap but cheerful £80 compact and putting it in the Seashell SS-1 case.

The Epoque EHD-900 Ai is a bizarre paradox; a very high quality waterproof case surrounding an absolutely appalling camera. Underwater performance is excellent, the design is unattractive but functional, however the resulting picture quality is extremely poor compared to even a budget compact. It may be relatively cheap, but it’s a false economy.

”Here are a few sample shots taken with the Epoque EHD-900 Ai, both above and under water.” 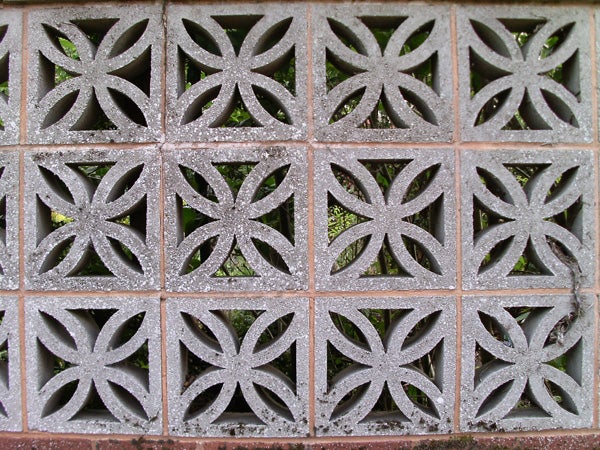 My usual distortion test shot shows significant barrel distortion, and even at this size you can see the corner blurring. 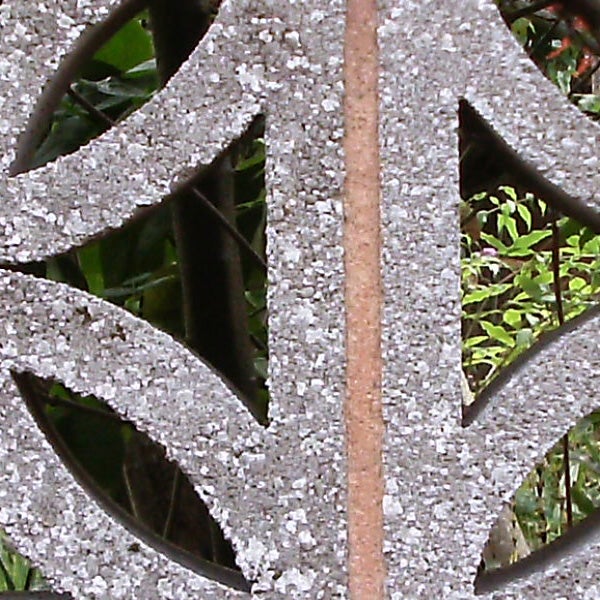 The image is horribly compressed, which loses a lot of fine detail, not that there was much to start with. 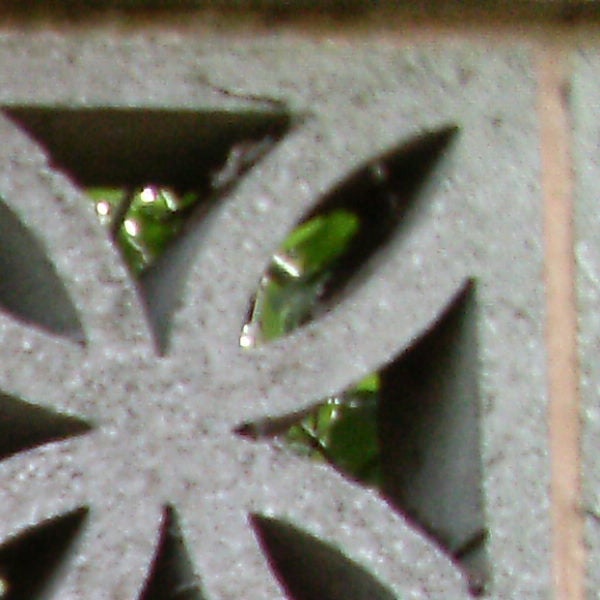 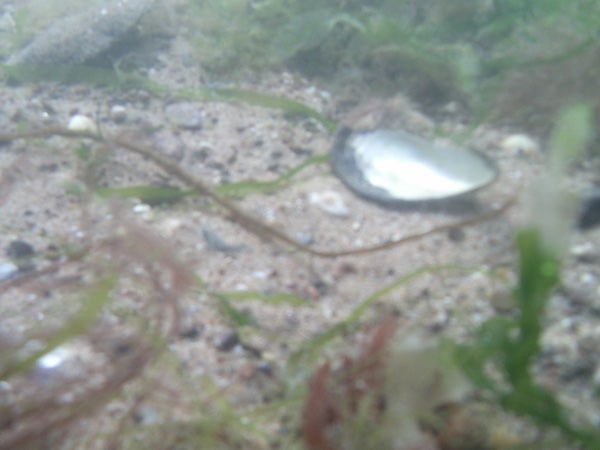 The monitor hood made the camera difficult to aim, and it refused to focus on this shell. 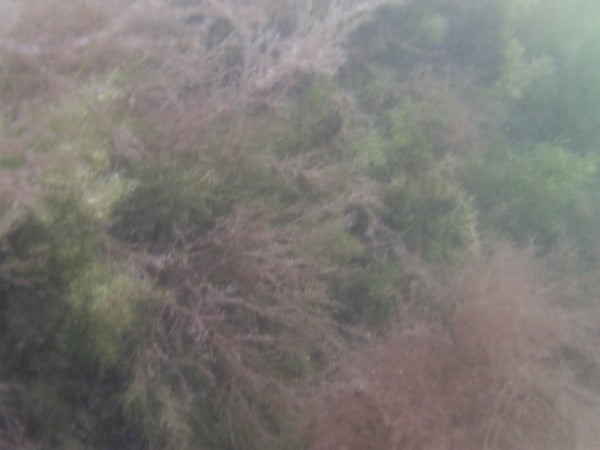 Again, the terrible low-light focusing results in a blurred shot. 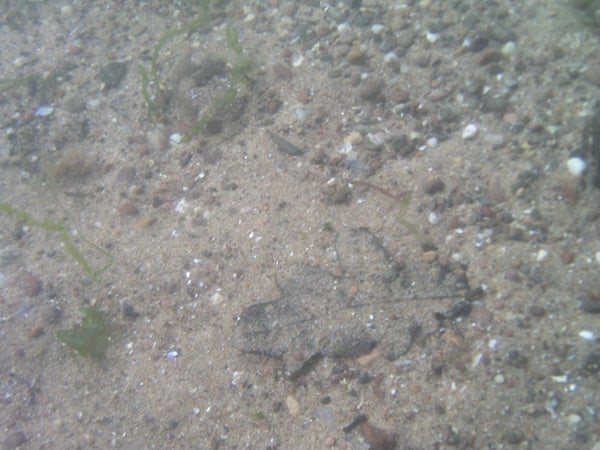 At least this one is sharp, but that’s just because the seabed happened to be in the area that the camera had randomly focused on.