In recent years, networked music streaming devices from Sonos, Philips and Logitech have transformed multi-room audio, transforming it from something that took a lot of work, expense and cabling into something within reach of the average household. However, in the last few months we’ve begun to see an alternative approach, using the ever-popular iPod as a source instead of a PC or hard disk base station.


With the Altec Lansing Octiv Air M812 it was possible to connect up to six wireless speaker units up to single dock, giving you multi-room audio from a single iPod (albeit with the same music playing in every room). Now EOS – a new face on these shores – brings us its own spin on the idea, fitting a fairly normal looking iPod speaker dock with a wireless transmitter, with the potential to pair it with up to four wireless speaker units. 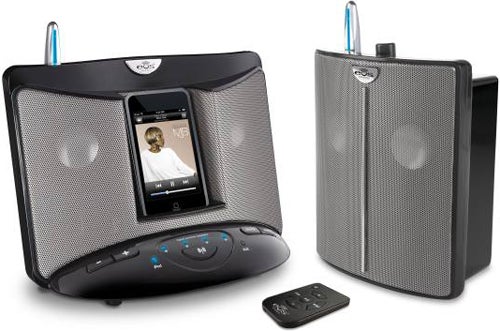 The core system reviewed here comprises of a base station with one additional wireless speaker, giving you a basic multi-room system in a single package. The wireless technology used is a proprietary spin on 2.4GHz dubbed Gigawave, which EOS claims has twice the range of bandwidth of a comparable Bluetooth setup, with more effective interference and error correction technology to boot.


There’s no encryption or manual channel switching on offer, but EOS speaker units can be registered to specific base stations. So if your middle-aged, MOR-loving neighbour buys one, you won’t be left listening to Michael Ball and Barbara Streisand instead of Mastodon and Bat for Lashes.


In terms of style, the EOS Wireless base station looks like, well, your average compact iPod speaker dock; the sculpted cradle sitting square between the twin 1.5in neodymium speakers, with the bass driver pointing out through the base of the unit. A glossy piano black finish and blue LED lighting makes a stab at class, the overall effect isn’t particularly exciting or distinctive and certainly won’t be giving B&W, BOSE or even Logitech a run for their money.


The docking cradle itself is also as basic as they come, with just the connector, a recess big enough to take an iPhone or iPod touch, and a range of standard-issue plastic adaptors to go inside it. On the positive side, build-quality is generally decent, the speakers are protected by heavyweight metal grills and there’s a distinct shortage of unnecessary clutter and controls.


An LED display keeps you informed of which wireless units are currently connected, and there’s also a button to mute the built-in speaker if you just want sound from the outboard speakers. There’s a 3.5in auxiliary input at the back to handle other players, and you can quickly switch between sources using the Source button at the front.

The wireless unit is similarly basic, but discrete and unobtrusive in a good way. The volume knob switches it on and controls output, there are two 1.5in neodymium drivers at the front and one bass driver pointing out of the back of the unit, and that’s all you really need to worry about. Cleverly, the unit can be placed in either horizontal or vertical positions, and the power supply is neatly integrated in the unit while it’s not in use. Clip on the required UK attachment, undo the clip, pull the PSU out and plug it in, and you’re away.


This makes the wireless speaker feel particularly portable. Leaving your iPod in the lounge, you can happily drag the compact, lightweight speaker into the kitchen, bedroom or study as easily as you might a portable radio.


Unlike some iPod speaker docks I’ve seen recently, the EOS does support the first-gen and second-gen iPhones, the second-gen iPod touch and the fourth-gen nano. As is normally the case, however, the iPhone has to be in Airplane mode while on the dock, so you won’t be able to take calls while it’s playing or charging. 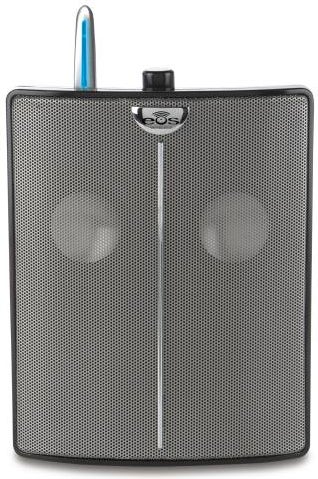 Still, the really important thing here is that wireless operation is both ridiculously easy and extremely effective. In my case, I simply plugged in the base station in one room and set some music playing before plugging in the wireless speaker in another. A few seconds later, music came out.


The antenna on the wireless speaker flashes when it’s searching for the base station and glows continuously when connected, and the only reason to mess around is if you need to register your speakers to your specific bass unit. Even this is a one-button exercise, though you will need all wireless speakers within easy reach. The reason? You only have sixty seconds to switch them on after pressing the link button on the base unit, though if you fumble it’s possible to add other units to the network later on.


EOS quotes a range of 50m irrespective of walls or ceilings, and within my average three-bedroom detached house – a 1950s building with fairly solid walls – I had no problem getting a signal from the base unit in every room. That’s more than I can say for my WiFi signal. I did get a quiet, low-level buzz from the wireless unit in some locations, but nothing that interfered with my listening.

All this stuff is very good, and when you consider that the core system is £249 and extra units £99 each, the EOS system sounds like good value for money too. The one fly in the ointment is sound quality.


It’s not that the EOS wireless system sounds bad. At low volume levels the output is clear, there’s plenty of detail in the mid-range and at the top-end, and while the bass isn’t particularly expansive, it is at least noticeably there. The sound is also surprisingly wide for such a small unit, SRS processing helping to produce a more immersive and less obviously directional noise than you might expect from such a compact unit. As a device for background listening in the kitchen while you’re doing the washing up, either the base station or wireless speaker will do just fine.


All the same, there’s not a lot of warmth to the tone, and the low-end and mid-range can sound thin, the bass in particular suffering from a general lack of oomph. This can make intimate, acoustic tracks, like Alison Krauss’s Wouldn’t be so Bad, sound cold, while rocky tracks, like Audioslave’s Revelations, lose much of their impact.


Things do get better with a bit more volume, but you need to be careful. Just below half-way the sound rounds out and warms up a little, but push it further and the mid-range takes on a nasty brash quality, while the bass begins to muffle or even distort. The tight riffs and thumping bass of Revelations degenerate into a noise, while the loud brass passages in the funeral music from Wagner’s Gotterdamerung are actually painful to listen to. In other words, the EOS is fine for background listening, but if you want to turn your music up loud and give it your full attention, this probably isn’t for you. 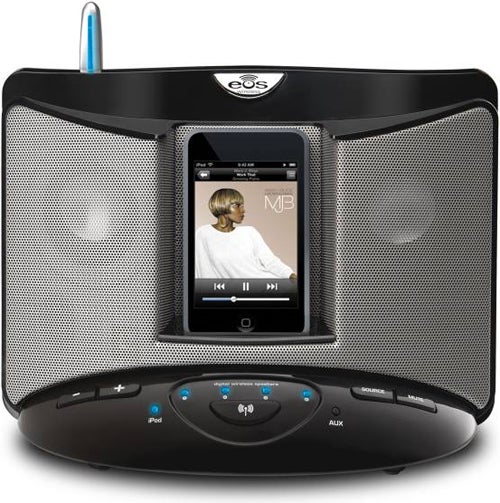 There are some other points to consider here, however. Due to the back or floor firing design of the bass speaker, the performance depends a lot on what surface you have the base station or wireless unit sitting on. Wooden floors, thick kitchen worktops and nearby walls are fine, while chipboard shelves or a glass-topped bedside table seem to accentuate the worst qualities. Secondly, the output isn’t a million miles away from what you’d get from the majority of iPod speaker docks in the sub-£100 price range.


Admittedly with the EOS system you can assume that at least some of the additional £150 cost is due to the wireless functionality and the additional speaker unit. Remember, the Altec Lansing Octiv-Air might have delivered a stronger audio performance, but you did get just the one wireless speaker for your cash, with nothing built in to the dock.


All the same – and those two points notwithstanding – a lot depends on how much multi-room audio and wireless convenience mean to you. Much as I like being able to lug the lightweight wireless unit from room to room or the thought of adding additional speakers for my office or bedroom, at £250 we’re only talking decent rather than great value for money. More to the point, there are portable iPod speaker docks for less that offer better sound quality, and you could easily buy two for the same sort of money. If you want to create a cheap, reasonable sounding iPod-driven multi-room system and you’re not bothered about ultimate sound quality then the core system is a decent buy, and for ease of setup and use the EOS wireless system is beyond reproach. Just be aware that you could get better sounding music for your cash.

A well-conceived, flexible and upgradable iPod wireless sound system, but the trade-off is that audio quality is slightly second-rate.