Enter the Gungeon joins the ranks of Binding of Isaac and Spelunky, with a new twist on the procedurally generated roguelike video game. Part dungeon crawler, part bullet hell, Dodge Roll Games’ offering can be incredibly fun, featuring some really interesting mechanics. However, it somehow lacks the “one more go” itch of its contemporaries, mainly due to the lack of control when the proverbial hits the fan.

The premise is simple. You choose from one of four unlikely heroes, who will take on a series of new and challenging dungeons full of things designed to kill. The quest is to obtain the one item to right every sin you’ve committed: a gun that can change your past. But the story serves only to set up all the bullet-dodging mayhem that’s about to unfold.

Dodge Roll Games has built an incredibly polished game. Everything from the cute retro-inspired design, dungeon layouts and tight controls – everything works so that the player feels able to survive the Gungeon. 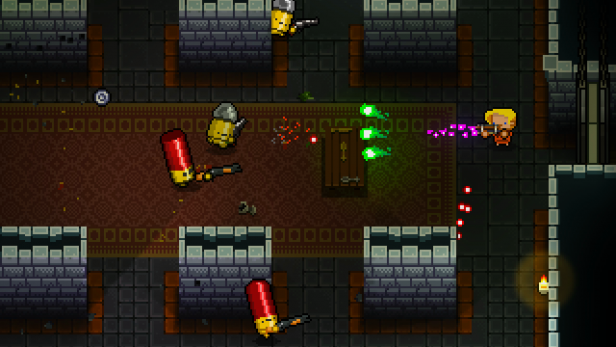 There are four starter characters, each with their own unique weapons and perks. The convict begins with a pistol and shotgun, the hunter a crossbow, the marine an armour boost thanks to his helmet, and the pilot – who has a touch of the Han Solo’s about him – carries a lockpick, providing an opportunity to open chests without requiring a key. Each character presents unique challenges in the game.

The convict is the easiest starter character, so she became my go-to shooter. While you’ll always be outnumbered and outgunned in the Gungeon, you do possess a few tricks up your sleeve to even out the odds. For starters there’s the dodge, which can be used to jump over bullets. You have to time it to perfection, though. It’s hard during the heat of the fight to remember this is an option – I opted to strafe around fire most of the time – but it can be incredibly useful in moderately intense shootouts.

Then there are blanks. These are a limited resource that when used negate any and all fire currently on the screen – like a reset button. This will be your saviour when overwhelmed by enemy fire, and is crucial in boss encounters.

Finally, you can also kick over tables with the press of a button to provide cover from enemy fire. This isn’t often useful, though, since enemies attack from all sides. As a result, you’ll often have to move away from the cover you’ve created before it actually blocks anything. 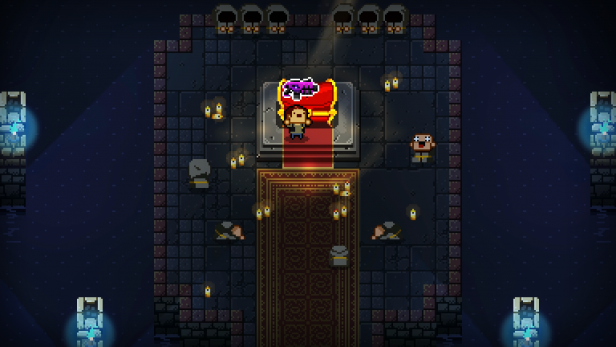 And let’s not forget about the guns – LOTS of them. There are dozens to be found, and each with different features to deal with the various enemies. The variety of weaponry certainly keeps things interesting, but be sure to take reload time into consideration.

Reloading will quickly become a frustration, since you have to trigger it manually rather than your character automatically doing so after firing the final round in a clip. Also, as cute as it is to have active reload an item pickup, the fact that it isn’t standard is also annoying.

Every enemy is inspired by firearms. This would no doubt be every American Republican’s dreamland. Bullet-wielding AK-47’s will hunt you down, while shotgun shell bats fly at you and grenades bounce around ready to explode at any point. As dangerous as this world appears, from a design perspective, it’s a wonderful place to be.

The characters that shine most of all are the bosses. Each is a nod to a character in gaming history, and each will be sure to bring a smile to your face.

Gatling Gull, the Rapid Fire Raptor, is a clear take from Metal Gear Solid’s Raven. So much so that, upon his demise, a murder of crows will swarm down and remove the body. Sphere of Many Guns is dangerously close to Doom’s Cacodemon; I worry that Dodge Roll will be getting letters from id Software.

However, while the bosses are a great example of the exemplary visual design, sadly, they’re also the biggest issue with the game. 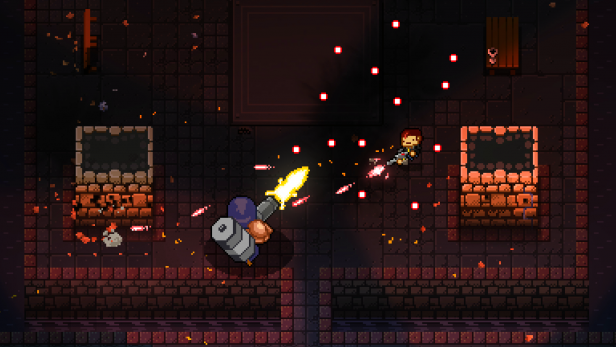 Other roguelikes, such as Rogue Legacy, Binding of Isaac and Spelunky, perfectly encapsulate that “one more go” addictiveness because, when you die, you feel like you can definitely do better on your next turn. In Enter the Gungeon, however, there’s so much mayhem on screen that often I felt as though it was luck, rather than judgement, that saw me through.

In fact, rather than feel a deep desire to immediately restart and improve, I felt defeated, that there was no way I could emulate that effort again. Death can come from anywhere, and it’s this random element often experienced with bullet-hell shooters that makes me less inclined to go again and again.

Enter the Gungeon is a fun experience – but unfortunately, it lacks the ability to sink its hooks in like other, similar titles.