EnGenius Technologies registers barely a blip on the UK consumer networking radar and yet its latest ESR-9710 wireless router looks to offer a fine range of features at a very competitive price. This wholly owned subsidiary of the Taiwanese Senao International company has always focused primarily on the North American market and it’s mainly through the efforts of UK distributor Solwise that it has achieved any exposure on this side of the pond.


The ESR-9710 is a compact box of tricks that incorporates an 802.11n wireless access point that’s Draft 2.0 compliant. Sensibly, the router has a quartet of switched Gigabit Ethernet LAN ports so if the claimed 300Mbps wireless-N speeds were ever actually achievable in the real world you won’t have the bottleneck between WLAN and LAN systems that routers with slower Fast Ethernet ports will create. For Internet access you have an RJ-45 WAN port so you’ll need an external cable or ADSL modem with an Ethernet port. 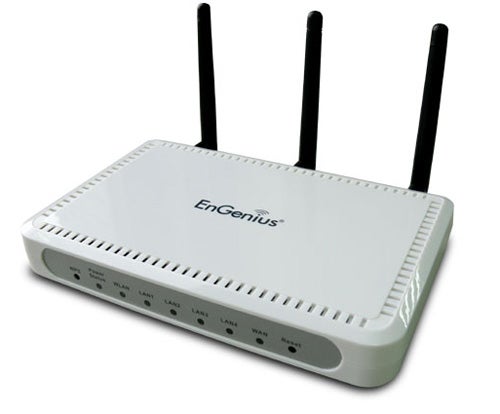 For installation you don’t get any smart utilities that search for the router on the network but its tidy web interface offers a wizard for setting up Internet access. For testing we used an intelligent ActionTec ADSL modem and had web access up and running in a matter of seconds. Make it a priority at this stage to secure the router from unwanted intrusion as by default it’s left wide open. Administrative access starts with a blank password and the wireless access point is switched on but with no encryption applied. Once again, a wizard makes light work of the latter and asks for an SSID and offers choices of Good, Better or Best security modes which equate to WEP, WPA or WPA2 encryption. There’s more as the WPA-Enterprise option uses an external RADIUS server to authenticate users to the router. It may be excessive but the router even allows you to nominate a backup RADIUS server if the primary server goes down. 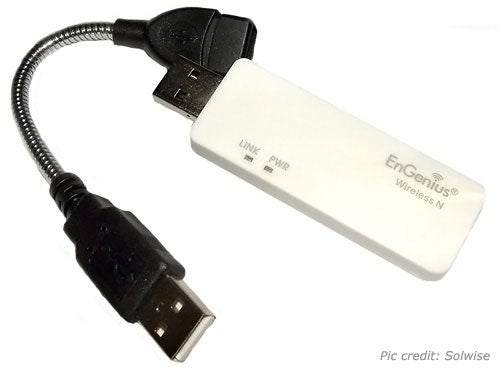 Wireless security goes one step beyond as the router also supports WPS (Wi-Fi Protected Setup) which allows you to swiftly add a wireless client that supports a PIN or a button press. For performance testing we used the EnGenius EUB-9701 USB wireless-n adapter (£41.76 from Solwise) and were disappointed to find that it doesn’t support WPS making this a largely redundant feature. Nevertheless, we installed the adapter on a Boston Supermicro workstation running Windows Vista without any problems. We also successfully tested compatibility using a Fujitsu Siemens LifeBook running XP SP2 and equipped with a TRENDnet 802.11n PC Card.

No surprises in the wireless performance department as EnGenius is yet another vendor that falls miles shy of the claimed 300Mbps. With a WPA2 encrypted short range connection we copied a 690MB video file from a PC on the LAN to the Vista system in 103 seconds for an average speed of 53.6Mbps. Signal strength also dropped significantly as distance increased, with the PC Card utility showing this falling by around fifty per cent with the laptop on the floor below the router.

EnGenius scores highly for features with its far superior web site filtering in comparison to the likes of Netgear. Whereas the latter only allows a simple blacklist of URLs to be created, the ESR-9710 uses policies to determine precisely what the selected systems are allowed to access on the Internet. You create a list of URLs from the Web Filter section and then use the Access Control feature to add systems to a policy which can be used to block access to all sites except those in your white-list. Usefully, you can create schedules to decide when a policy is active and also use them to merely log sites being visited or block access completely. 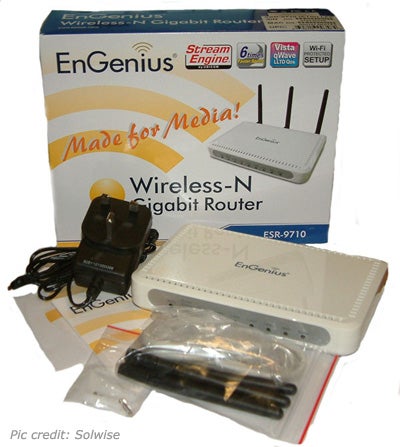 A MAC address filter can be used to deny or allow network access to listed systems and during rule creation the router displays the addresses of all known systems, along with their machine name, making it simple to pick the ones you want to control. Virtual servers allow you to assign public ports on the router to specific servers on the LAN whilst inbound filters can be used to restrict access for remote IP address ranges to selected internal systems. Once created these inbound filter lists can be assigned to virtual servers or port forwarding rules and also used to restrict remote administrative access.


There’s more. WISH (Wireless Intelligent Stream Handling) can be used to prioritise wireless traffic whilst the StreamEngine feature measures your WAN uplink bandwidth and allows you to create more rules that prioritise selected application traffic. We’re not convinced these are essential features but they could prove useful if VoIP figures strongly on your network. We also liked the extensive logging features which provide plenty of data on connected systems, details on firewall activity and web site access plus WISH and Internet sessions.


The EnGenius ESR-9710 undoubtedly delivers a whole heap of features which are almost identical to those on offer by D-Link’s DIR-655. It’s a tough call as they are very similarly priced although the DIR-655 does have an extra USB port and is covered by D-Link’s remarkable 11-year warranty. 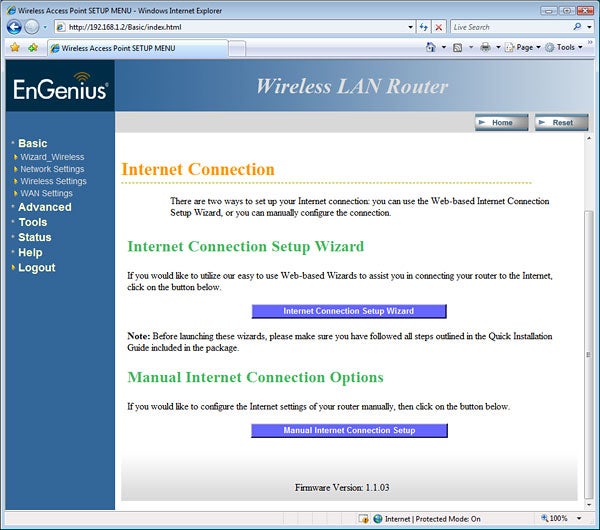 (centre)”’The router provides plenty of wizards to get you off the ground running.”’(/centre)—- 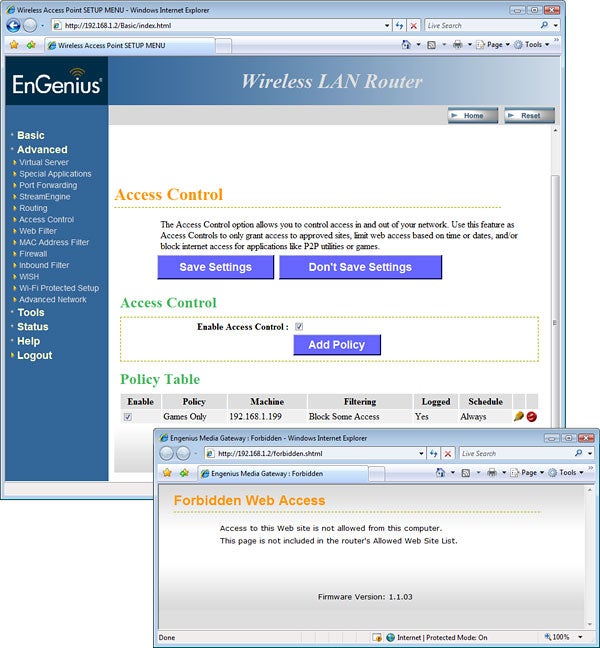 (centre)”’There’s little to choose for features between EnGenius and D-Link.”’(/centre)—- 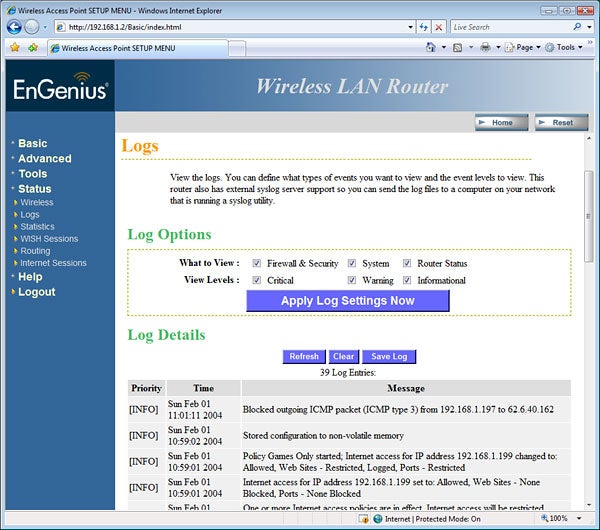 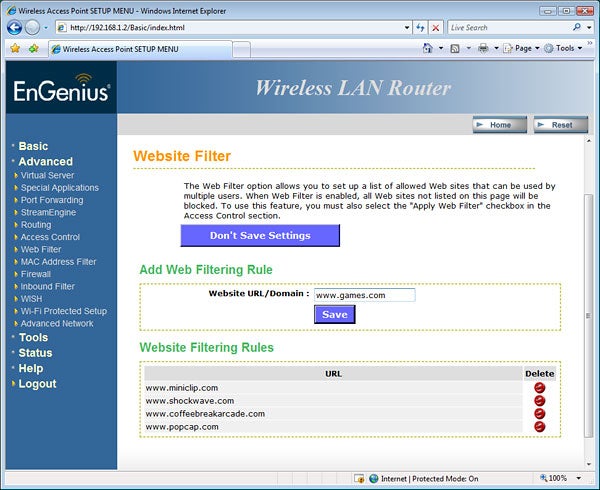