Hard drive enclosures are, when it comes right down to it, a means to an end. Whether they add RFID equipped like the Silverstone Treasure TS01B or offer tool-less assembly as featured by the Coolermaster Xcraft 360 at base all they really need to do is provide a barrier between the world and your drive while not hindering usability. Anything else, such as bundled software or fancy hardware add-ons comes under the heading of superfluous if you don’t want it.


In point of fact, if all you want is a way of turning your non-portable hard drive into a portable one without the garnish (so to speak) then all these so-called added value features simply become an unwanted cost. Thank goodness that someone at Enermax has realised this and created the Jazz. A simple 2.5in SATA to mini-USB caddy without all the (if you’ll forgive the pun) jazzing up that many rival products are subject to. 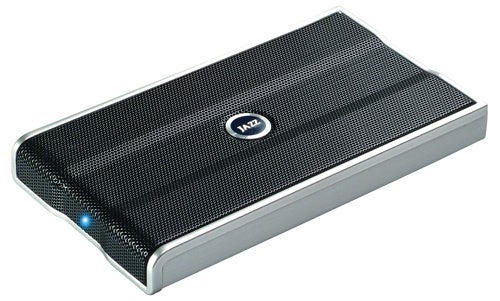 Inside the box you’ll find the enclosure itself, a USB to mini-USB cable and a USB to 5V power connector converter. This is to ensure the fitted drive will work in systems that don’t provide enough power over a single USB cable. Personally I’d rather see a two-to-one USB to mini-USB cable, but ultimately the result is the same and in fairness to Enermax, this method is more indicative of what the second connector is actually for.


The enclosure itself comes in two pieces, held together by four screws in the corners, which come apart easily and when fitted together are entirely flush. The bottom part is made from aluminium and houses a screwless drive holder, which I’m happy to report is perfectly secure. The top section comprises a solid aluminium frame and a perforated inner sheet of steel. The purpose of this is, twofold; first: it’s pretty cool being able to see into the enclosure if you ask me and second: the drive can be kept cool by a constant flow of air.


While it makes no difference to any other aspect of the product, it is worth noting the Jazz comes in both a black and silver version. I can’t quite decide which I prefer, but having a choice is fine by me.

While it does look very nice, it’s worth remembering that aluminium is not well known for its resilience and prone to scratching. To counter that the enclosure comes with a carrying pouch made from plastic with a velvety-textured outer coating. Importantly this will also protect the enclosure from stray liquids – an important point given the perforated top which is just begging to have a mug of coffee spilled into it.


Everything considered the Jazz is probably one of the best enclosures I’ve seen to date, the build quality is admirable. Admittedly there isn’t anything in the package that you wouldn’t think would be there, but neither is anything missing that you would expect.

Performance is definitely acceptable as well. I tested using my usual mix of a single large file, namely Vista Service Pack 1 x64 weighing in at 726MB, and a folder containing a mix of Word documents and images amounting to about 60MB – repeated three times and averaged.


Vista SP1 transferred from the drive in 22 seconds, for a transfer speed of 33MB/s and was written to it in 26 seconds, at a speed of 27.9MB/s. The multiple small file tests showed similar figures of 31.5MB/s read and 26.7MB/s write. This is as good as any drive connected via mini-USB will offer so definitely not anything to complain about.


Despite not having any extra features on top of the obvious one of working as a USB drive, you surely won’t expect me to call the Jazz expensive at around £12 – even if it is just a chunk of metal and a SATA controller. Well that’s exactly the case, because while I can’t say Enermax is offering a lot for the price, I still feel that given the build quality you are getting your money’s worth – and then some.


Unlike many rival manufactures Enermax is making its place in the hard drive enclosure market not by trying to reinvent the wheel, but by offering a very good example at a great price. The only addition I’d like to see is e-SATA, but that really is the only complaint I have of the Jazz – and even then I’m scraping the bottom of the proverbial barrel.