One of TrustedReview’s continuing quests is to convince the computer buying public that buying fancy peripherals is not just the domain of gamers but is something everyone should consider. The reason for this is quite simple, good peripherals make using a PC infinitely more enjoyable, no matter how fast or slow that PC may be.


This is why, if anyone had ever asked me, I would’ve leapt at the chance to recommend everyone go out and buy the original Enermax Aurora keyboard. Its combination of a superb key action, along with its low-profile design makes it a joy to use, even for extended periods of time. Moreover, the added extras like audio pass-through, for plugging your microphone and headphones into, and USB hub, make it very versatile. The only things it lacks are any of the dedicated ‘gaming’ features like macro keys and extra key markings that many gamer oriented keyboards demand, which in my opinion is no bad thing. 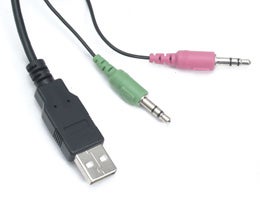 ”(centre) The cables for the audio pass-through on the original Aurora were very thin.(/centre)”

As Spode pointed out when he reviewed it a couple of years ago, the original Aurora does suffer one obvious physical problem, namely the cables used for the audio pass-through are very thin and prone to breaking. Also, extended use has revealed another problem – the paint on the plastic keys has begun to wear off on the most used keys (not the numbers, mind, but rather the colouring round them). Even considering the keyboard in question has been used constantly for two years, this is slightly disappointing when you consider the hefty £60 price these keyboards originally demanded. However, none of these things would put me off buying one simply because I love typing on them and I find the audio pass-through and USB port replication indispensible.


So, when news of a new, apparently improved, version of the Aurora floated to my ears I jumped at the chance to take a look. Called the Premium it’s essentially just a slightly tweaked version of the old Aurora, with minor additions like the new Windows Vista logo now being used on the Windows key, a slightly rougher texture used on the keys, and a move to USB 2.0, for faster data transfer, for the replicated USB ports. Its fanciest new trick, though, is the audio pass-through now uses the keyboard’s USB connection, rather than separate stereo jack cables as seen on the original. This brings with it two advantages. First and foremost, it means you have fewer cables to manage and secondly, the single thick USB cable is far less prone to breaking than the microscopically thin separate audio cables used on the original. 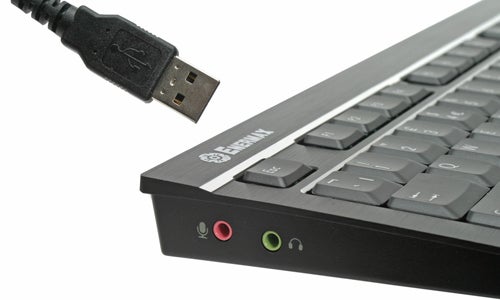 So the Enermax Aurora Premium is more of an evolution than a revolution but then improving on an already impressive product is always going to be a challenge. The key question is whether the little nips and tucks the Premium has received have transformed the Aurora from a plain Jane to a prom queen or if it has turned it into some sort of plastic surgery-gone-wrong-esque monster.

The styling of the Aurora is little different to the old model with the same black (silver is also available) anodised brushed aluminium body surrounding the keys and making up the wrist rest. Just as with the original, and every other brushed aluminium surface we’ve ever encountered on any device, the Premium picks up fingerprints with consummate ease. As always, though, a soft cloth, or such like, will take care of these. What’s more, even when covered in greasy paw prints, the Aurora’s looks are only betrayed when viewed from certain angles.

At 455 x 172.5 x 25mm, the Aurora is to all intents and purposes a standard sized keyboard, apart from its low-profile design. It is, however, uncommonly heavy, at 1.3Kg, but that’s the price you pay for the quality aluminium construction. Also, the weight means the keyboard stays rooted to the spot and doesn’t slide across your desk when typing.

The keys are the same notebook style, low-profile design used on the original Aurora. The surface of the keys feels rougher and the action a little stiffer than my old Aurora but this may just be because my old keyboard is feeling the strain of two years of heavy use. Either way, the Premium is still an utter pleasure to type on. The rough surface of the keys gives you good purchase so your finger’s don’t go flying off the keys when typing at speed and Enermax’s patented scissor spring technology ensures all the keys still depress properly even when approached from the most peculiar angles. Moreover, the strong springiness and positive action of the keys means you always know when you’ve struck a key so touch-typing is a breeze.


So in terms of typing the Premium is a worthy successor to the Aurora’s low-profile crown. However, when we look at the Premium’s other big feature – the USB audio – the whole house of cards comes crashing down.


Put simply, the quality of the Premium’s onboard sound is appalling. There’s a constant background hiss that, regardless of how much tweaking I did, I couldn’t get rid of. If you have possibly the most unresponsive awful pair of earphones, you may not notice, but if you’ve invested good money in some quality cans, you’ll be sorely disappointed.

Although that one thing is enough to render the audio essentially useless, there is one other annoyance to cap it all off. There doesn’t seem to be a way of actually controlling the volume of the device so you have to put the volume controller in most programs to near zero for it to be listenable. This may actually be largely responsible for the horrible background noise as the device volume may be jammed on maximum. Whatever it is, however, I couldn’t shift either problem. Why Enermax thought this was a better solution than, god forbid, just using thicker cables for the audio, I do not know.

The one saving grace for the Aurora Premium is its fairly competitive price. At around £45 it is around the same price as most other ‘gaming’ keyboards and less than many other ‘quality’ keyboards, though many of these include extra features. Even then, though, the original Aurora is still available from the same online retailer for £35, and I know which I’d go for.


The Enermax Aurora Premium is attractive, well built, and a pleasure to type on. Indeed, unless you’re a die hard fan of full-height keyboards I’d recommend it to all and sundry on this basis. However, if the USB audio pass-through is a feature you’re looking out for then think again because the sound quality is awful. Indeed, overall I’d recommend you actually just go and buy the original Aurora instead (while it’s still available).