With Quake III Arena, iD Software played a pioneering role in the development of the online FPS. Like its close contemporary, Unreal Tournament, it took the bold step of downplaying the single-player portion to the extent that it became little more than a warm-up. This was bad news for those without a local LANParty scene or a high-speed Internet connection, but at least it left the team to concentrate on building a superbly-balanced, competitive frag-fest. Since then, however, iD seems to have shied away from the genre. While the Unreal, Call of Duty and Battlefield franchises have upped the ante and transformed the scale of online warfare, Doom 3 and Quake 4 put the emphasis back on the single-player experience. You still got a multiplayer element, but one that concentrated purely on providing old-school deathmatch thrills. 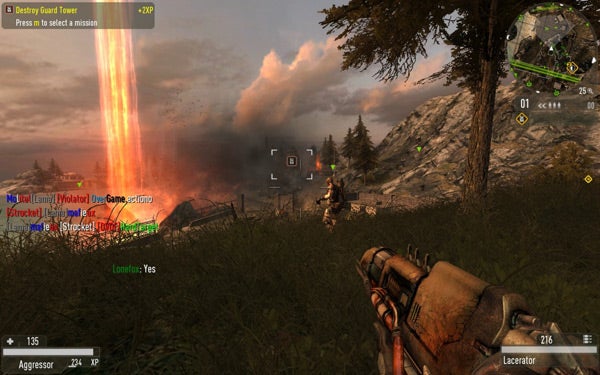 Well, with Enemy Territory: Quake Wars, iD Software and the Quake franchise are back innovating in the online gaming arena. Of course, as the title suggests the Quake heritage is only part of the picture. While ET: QW fits neatly into the existing Quake line-up, the lineage is really skin-deep, and beneath that skin it has more in common with the Enemy Territory stand-alone expansion that its developers, Splash Damage, put together for Wolfenstein back in 2003. Like that game, it’s a class-based, objective-focused online FPS with a neatly integrated experience system. In fact, most of the central game mechanics are either imported wholesale or developed from the earlier game. 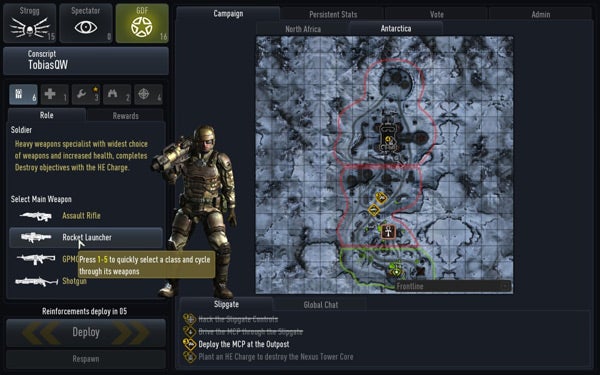 What has iD and the Quake connection brought to the party? Well, first of all an established setting and a familiar enemy that we’ve all come to know and sort-of love. Quake 4 first gave us the taste of the Strogg life, but Enemy Territory takes it to a whole new level. In fact, it’s primarily the non-human team that gives the game a macabre flavour all its own. I know some of you will inevitable gravitate towards humanity’s last hope, the Global Defence Force, but trust me – the Strogg are a hoot. Whether hopping around in jet-packs or converting enemy corpses into ‘spawn hosts’ – essentially a handy ad-hoc spawn point – you can’t help but love the bio-mechanical monsters. They do the Makron proud.

More importantly, however, iD brought an enhanced version of the Doom 3/Tech 4 engine for ET: QW to run on. Much has been made of the engine’s central feature – the MegaTexture – and not without reason. The application of one, vast texture to the base landscapes has helped Splash Damage create environments that are expansive, distinctive and packed with detail, with draw distances that go on forever and some fine use of reflective water and instanced vegetation to bring all that hard rock to life. Meanwhile, those rich outdoor settings transition to believable interiors without a single pause or glitch. Perhaps it shows how far we’ve come that ET: QW’s visuals, which once seemed unbelievable, now merely look good against what we’re seeing in Gears of War or Medal of Honor: Airborne, but the character and vehicle models, not to mention the weapon and explosion effects, put the game miles ahead of its obvious rival, Battlefield 2142. It’s a sumptuous feast for my beloved Asus GeForce 8800 Ultra, and it still looks great on lesser hardware. It’s safe to say the ET: QW is undeniably the most impressive large-scale online FPS of the moment. 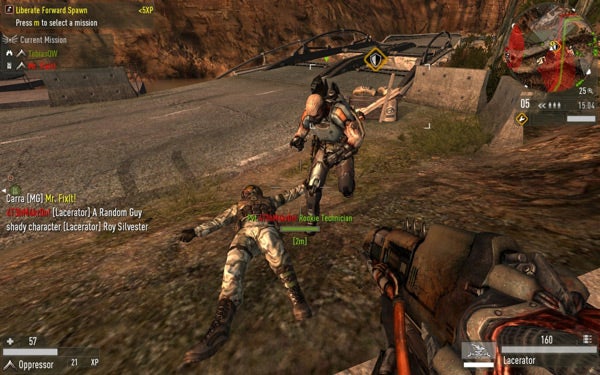 Surprisingly, though, the thing that sells ET: QW to me is not what iD has bought to the graphics, but what Splash Damage has bought to the gameplay. My problem with Battlefield has never been the features or the game mechanics, but that it’s always been a game with loads of potential that only occasionally lives up to it. For every game of Battlefield I’ve played in which two matched teams clash in a dizzying showcase of teamwork and strategy, I’ve played two in which one third of the team wanders around in confusion while another third nicks all the vehicles for showboating solo attacks on enemy installations. Meanwhile, the other third plays as if it’s just another deathmatch outing. Don’t get me wrong – I’ve always had fun, but only rarely have I found the experience 100 per cent satisfying. 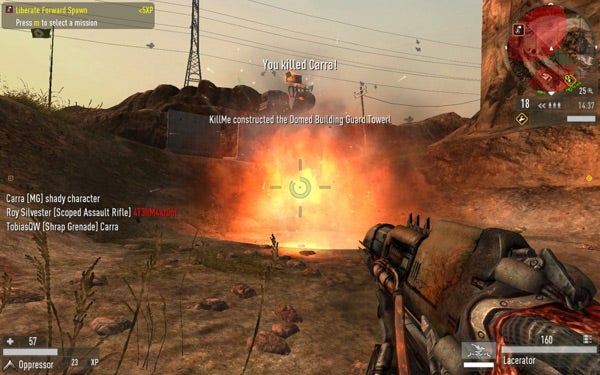 ET: QW plays a little bit smarter. As in Battlefield, you pick a class before spawning, and you can change class between re-spawns. Both the Strogg forces and the GDF have the same basic occupations: a standard grunt made more attractive by the ability to use explosive charges; a medic with additional support capabilities; a spy who can take on enemy form, hack enemy weapons and objectives or scramble enemy vehicles; an engineer who can repair vehicles, place mines and deploy anti-vehicle or anti-infantry turrets; a field operative with the power to deploy offensive artillery or call in air-strikes. There are minor differences in the secondary capabilities, but each side offers essentially the same mix of battlefield roles.

What works differently here is how those roles are played out. In ET: QW you’re not simply jostling over spawn points, but working towards a central, map-specific objective. To complete this objective and win the map, you will have to complete other, contributing objectives, and each map also throws in secondary targets which, while they might not have a direct impact on the main objectives, will make the map easier as a whole. The clever thing is that a computer controlled commander is continually analysing these objectives as the game progresses, and offering them to the players according to their chosen class as missions. You can normally choose from one of several, and they’re worth completing as there’s always something in it for you. 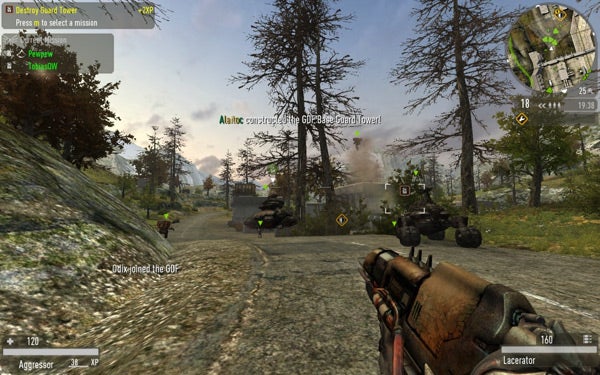 You see, completing these missions gives you experience points (XP) which enhance your skills and abilities. Some of these are specific to the class you’re playing, while others transfer between classes should you switch. What’s more, XP, rather than kills, determines your placing in the final end-of-mission rankings, meaning there’s prestige in playing your part to the full. Finally, each map is only one third of a longer campaign, so earning XP in the first two maps will make your time easier in the third. It’s not a persistent experience system in the way that Battlefield’s is, though the game does throw in a system of persistent rankings and medals. I think this strikes a nice balance between rewarding the hardcore player base and ensuring that casual players and noobs aren’t instantly overwhelmed by super-powered killjoys the minute they hit a new server. 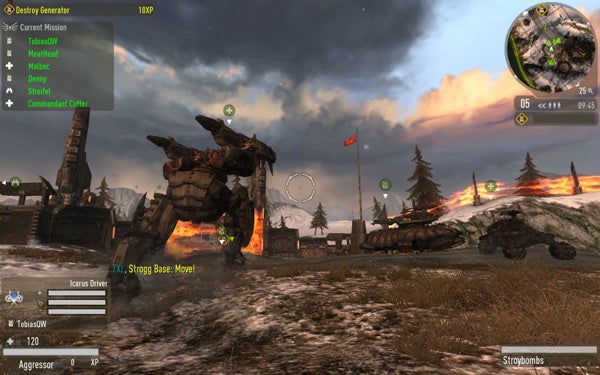 The upshot of this is that ET: QW is a game where everybody, from the hardcore player to the keen noob is at least vaguely aware of their role, and usually making some attempt to fill it. The grunts are racing forward to blow up objectives, capture spawn points or defend key areas; the medics are trawling the battlefield for troops to revive; the field-ops are deploying artillery and clearing the way with strategic air-strikes. There are still frustrating moments – why is that Strogg Technician wading into battle when he should be getting me back on my feet? – but overall the game has that feeling of teamwork and comradery that the Battlefield games so often lack. 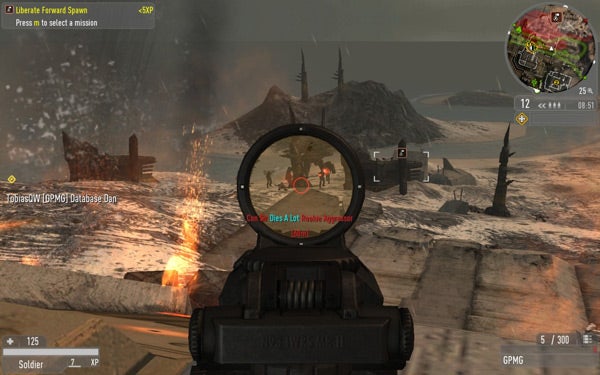 Nor is that all that’s clever. Linking the maps into campaigns does a great job of making you feel like you’re playing a key part in the defence/destruction of humanity, while also encouraging players to stick to the server for a long-haul rather than jump ship every time they lose a game. Vehicles, too, are handled brilliantly, with the game defaulting to a friendly handling mode that means even novice pilots can take aircraft out and do some damage to the opposition, rather than themselves. Develop confidence, and you can then switch to an advanced mode for tighter control. The weapons offer an interesting and well-balanced arsenal, and the deployables and air-strike capabilities make for some spectacular death-ray carnage on the battlefield.

Above all, ET:QW comes across as the most downright entertaining game in its class. It’s every bit as epic as Battlefield and every bit as packed with DIY action-movie moments, but it has a great gritty sci-fi feel and, surprisingly, a warm sense of humour. Only one thing spoils the experience, and that’s the learning curve. With all those classes, all those objectives, all those vehicles and all those capabilities there is an awful lot to get your head around, and while the game tries to make things easier with context-sensitive action keys, the first hour or two of play can be a painful experience. Learning how to deploy and then target artillery or how to place and arm a demolition charge takes time, and even after many hours of play I’m still only half-expert in roughly half the classes. 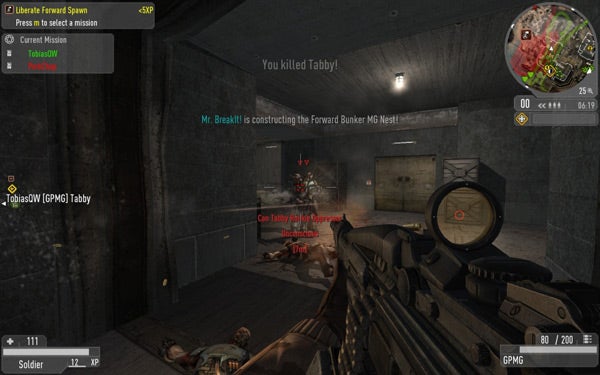 Playing offline with bots will help – and the little critters are perfectly capable of giving you a challenge if you want some practice – but learning live on the battlefield is a fruitless task, and one that’s growing more so as the rest of the player-base grows in skill and expertise. Arguably the best feature of the much-derided (and sometimes unfairly so) Shadowrun was that its developers had the sense to realise that it was a complex game. They sat down and put in a series of comprehensive tutorials that took you through the characters, their capabilities and their objectives. ET: QW is practically crying out for something similar. 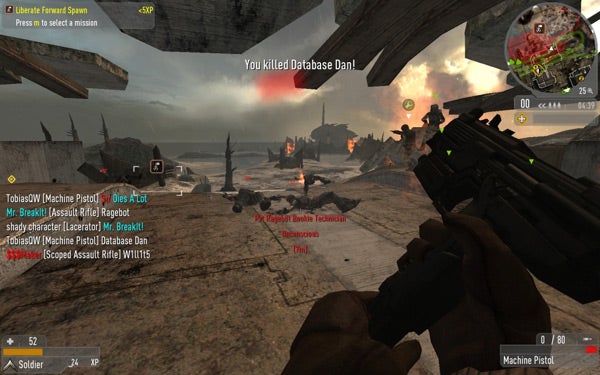 This is a shame, as if any game had the potential to bring the Battlefield style of gameplay to the masses, this is it. It has the Quake name, the Quake style, the spectacle and the fast pace of play to do the job. I’d hate to see it become just another haven for the hardcore virtual trooper. So my advice would be to get in now while you have the chance. I’ve played a lot of online blasters in the last couple of years, but this one has given me more honest-to-goodness fun than most. For me, that makes it the best of its breed for the moment. The only thing that undermines its position is timing. With Call of Duty 4 and Team Fortress 2 on the way, both backed by strong single-player offerings, will ET: QW hold its place in the sun for long? Maybe, maybe not, but I can’t see the servers emptying out on this one for some considerable time to come.


Not just a better looking battlefield game, but one which does much to redress the outstanding problems of poor teamwork in the genre. For now, the king of this particular hill.