Many games we play are basically cathartic. Aristotle coined the phrase around 335BC, meaning a huge emotional purge that’s supposed to cleanse you of your negative energies and restore your appetite for living. In games, we generally take this to mean an almighty outburst of violence, but it can also be a climax of fear, excitement or tension. It’s part of the reason why we all feel good after a bout of Half-Life 2, Resident Evil 4 or even Motorstorm.


Endless Ocean is not a cathartic game. It’s bloodless, gutless and shockingly low in tension. 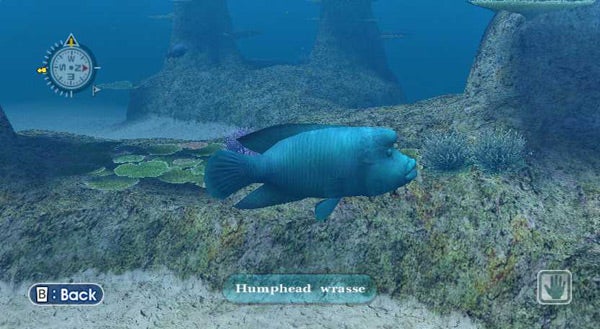 Instead, think of it as a sort of virtual holiday; not the sort where you visit sights or engage in dangerous activities, but the sort where you chill out, take things easy and soak up the sun. The Dead or Alive Extreme games tried something similar, but Endless Ocean does it all much better. Not only is it not composed of a series of useless mini-games enclosed in a rather sorry soft-porn wrapper, but it gives you something worthwhile to do with your time. In this case, you’re a new diver joining an organisation that specialises in marine exploration. Based on a small boat, your job is to hang around the sea West of the fictional Pacific isle of Manauri, and have a good nose around beneath the waves. 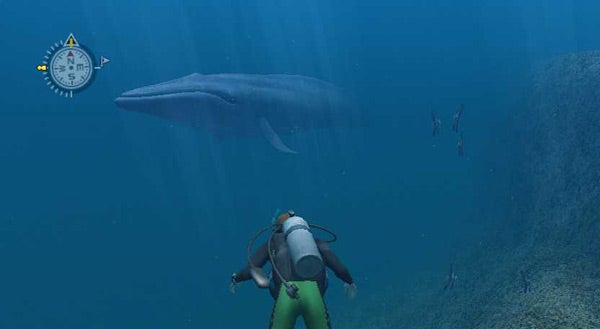 Here’s where the holiday bit comes in. Endless Ocean is not the sort of game that likes to tell you what to do and when to do it. You will receive missions through your handy smartphone – can you go to such and such a spot and check it our, or guide so and so for a dive around the Coral Forest and make damn sure he sees a Humphead Wrasse – but a lot of the time it’s up to you where you drop anchor and hop out for a dive. The game has clever ways of hinting where to go next, but the only limits you’ll find initially are how far away from the boat you can travel and how deep you can safely dive. 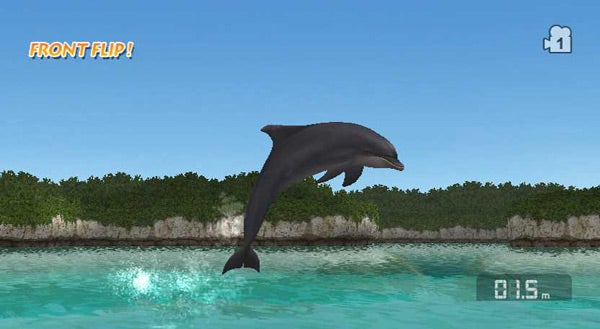 This is pretty cool, because this is a game you can relax into. The controls are based on the pointer functionality of the Wii remote: aim the blue dot on the screen and your diver shifts position to follow it. Press the B trigger and he swims towards the selected point. Press the + button when you’re near to a surface, and the view zooms in for added detail. Press A over fish and assorted swimming animals, and you can focus on them, then stroke them until you’re able to identify and add them to your creature journal. The controls don’t need to be crazily responsive because fast reactions really aren’t a factor. No killer sharks patrol these waters. There are no real time limits and you’re in no danger of running out of air. You can’t get too lost as the boat is always one menu selection away. You can just chill out and enjoy the view.

And it has to be said that the overall ambiance backs up that attitude. While not a stunning feast of visual detail, Endless Ocean is one of the nicest looking games I’ve seen on Wii, mainly thanks to some gorgeous underwater lighting, well-designed environments and some lifelike, well-animated creatures. I’d love to see a version of this running on the 360 or PS3, with more intricate coral and more realistic textures, yet Endless Ocean does capture some of the feeling of swimming around in warm blue waters and getting close to the aquatic fauna in the immediate locale. Add in a worryingly pleasant Classic FM style soundtrack featuring New Zealand chanteuse Hayley Westenra and time drifts by in a thoroughly agreeable fashion – providing you like this sort of thing. Don’t worry if the game’s choice of music horrifies you, either, as the game allows you to use your own MP3 soundtrack from a plugged-in SD memory card. 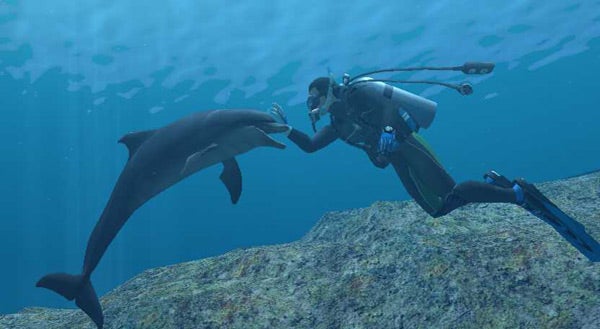 It’s not that there’s nothing to do or no sense of progression. The game packs in side-quests, from collecting fish information to sorting out the local aquarium to taking requested photos and sending them off to a local agent. You can train dolphins to do tricks and muck around with visiting penguins, or just sit back in a lounger and watch the waves. There’s even a slightly weird side-plot regarding a colleague and her dead father. With all this plus a sizable chunk of ocean to explore, there’s actually quite a lot to do. 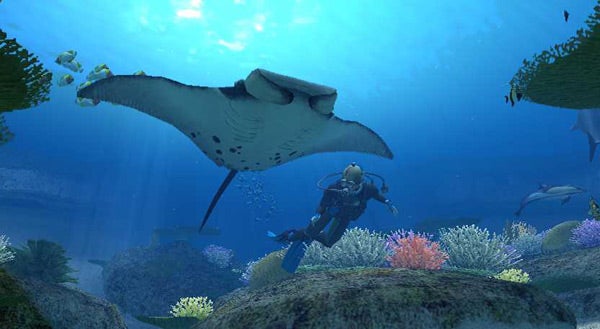 What’s more, the Ocean throws up more and more spectacular secrets as the game goes on. The first sight of a whale is genuinely impressive, while undersea caves, deep rifts and sunken ruins offer moments of awe to those with the right mentality. If you liked watching the BBC’s The Blue Planet, there’s a good chance that you’ll like playing this. Plus, as you get the chance to learn about the fish, aquatic mammals and sea-going reptiles in the area, you could even describe Endless Planet as educational.

By now you’ll probably have made up your mind. You’re either going to find Endless Ocean oddly compelling and even weirdly moving, or you’ll think it’s boring, undemanding and a total waste of your valuable time. Even I’ll admit that the odd killer shark wouldn’t have gone amiss (you could have stabbed it in the eye using the Wii controller). In fact, in my honest opinion the game could do with missions that involve trap-filled shipwrecks or exploring murky chasms populated by weird mutant fish with hideous jaws. Preferably with a sci-fi laser spear gun. 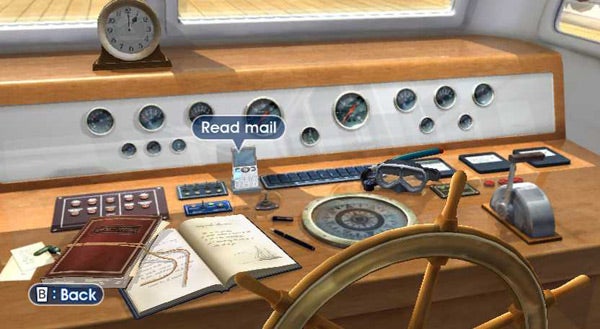 Still, I guess that’s just not the sort of game this is, and I suspect that levels of Testosterone have a major part to play in my reaction. My wife, who wouldn’t be caught dead playing a game that involved killer sharks, mutant fish or laser spear guns – or Bioshock, Call of Duty 4, Uncharted or my other recent favourites – absolutely loves Endless Ocean to bits. She almost had to be dragged away from the Wii remote so that I could play it. This might recommend it to you and yours or it might not. On the one hand, wouldn’t you like an excuse to buy a Wii or some more time to play more bloodthirsty games on another format? On the other, wouldn’t you like to complete Super Mario Galaxy some time this year? 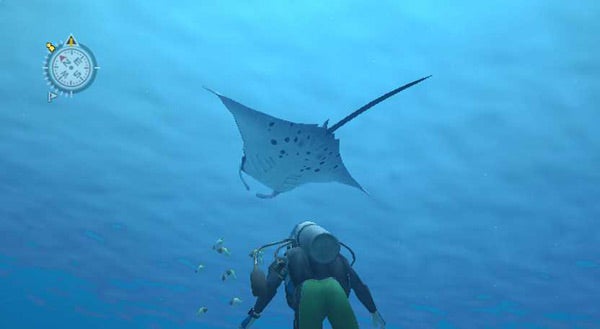 All of this makes Endless Ocean a tricky game to score. If you like it and its blessed out, hypnotic style then it’s an easy eight – only the odd bit of difficulty in navigating and the rather ponderous load times will spoil your experience. If you’re in the “Crumbs this is dull, is there nothing I can kill?” camp then I’m afraid you’d probably hit it with a rather nasty five. I’m going somewhere in-between, because I do find it strangely enchanting, yet I can’t shift the feeling that there’s something more exciting I could be doing with my time. I guess sometimes you want to chill out, but sometimes a little bloody catharsis really doesn’t go amiss.


Either the most beautiful and relaxing experience on the Wii or the most tedious fish-fondling game in town. Which it is will depend entirely on your outlook.