The jury’s still out on whether eBooks will ever truly hit the mainstream, but certainly there’s been more activity around them in 2008 than any previous year. Unfortunately Amazon hasn’t yet brought the Kindle to the UK, but Sony did create quite a stir with its elegant PRS-505 Reader which managed to bag itself a recommended award back in October. So the question is, can a small company from the Netherlands called Endless Ideas take on the role of giant killer and knock Sony off the top spot with the BeBook?


Like most of the current crop of ebooks on the market the BeBook is slightly smaller in size than an A5 sheet of paper. Unfortunately style-wise it’s more Primark than Armani as its plasticky grey case just can’t hold a torch to the luxurious matt silver finish of Sony’s Reader. Nevertheless, at 220g it does feel quite light and it certainly won’t weigh you down when you chuck it in a backpack or suitcase. 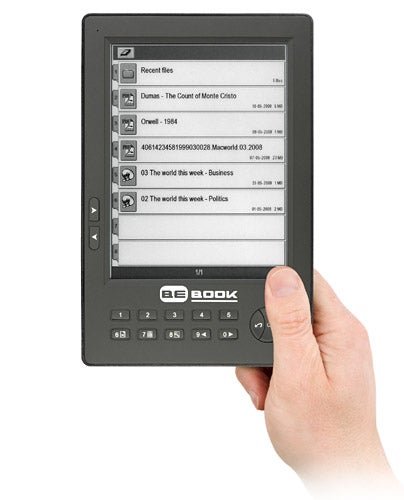 None of the ebooks we’ve used have what you’d call overly intuitive interfaces, as sadly no one has yet been able to come up with a GUI that will do for eBooks what the original iPod did for MP3 players. The BeBook is no different in this sense. On the one hand it trumps models like the Sony Reader and iRex Iliad with a tighter menu tree that cuts down on button presses. However, this plus is largely negated by the overly sluggish nature of the device and some rather odd design decisions made by Endless Ideas. The most jarring of these is the location of the menu buttons. Although the menu entries are numbered and shown in a column down the left hand side of the screen, the numerical buttons corresponding to these entries are arranged horizontally across the bottom of the device which just makes them feel a bit odd to use.


On the plus side the BeBook supports multiple fonts and character sets and these can be changed while you’re reading a book in most formats, although not in PDF documents. You can also choose between three different levels of zoom. The zoom works in different ways according to whether text in the document can be reflowed. In documents with re-flowable text the Bebook simply magnifies the text at three different levels. However, in other types of documents it simply zooms in and out on the page, with the largest level of zoom switching the display from portrait to landscape mode to fit more text horizontally on the screen.

As with all the other main ebooks on the market the BeBook uses an E Ink display with a resolution of 600 x 800. This is a high contrast, grey scale screen that doesn’t use a back light and doesn’t suffer from flicker. It produces a rock solid image that’s incredibly readable. Unlike LCD screens, you can comfortably stare at the BeBook’s display for hours and not suffer any eye strain. It really is very close to the printed page in terms of readability. That said the BeBook’s screen can only show four shades of grey, whereas the PRS-505 can display eight and the iRex Iliad sixteen.


Nevertheless, this is only really noticeable when you’re using the display to show pictures, although you may notice it if you’re a fan of graphic novels. Page turns take between two and three seconds, which is in line with all the other ebook readers we’ve used. The lag is to do with the nature of E Ink technology, as the screen first has to be blanked before it can be refreshed to show the new page. 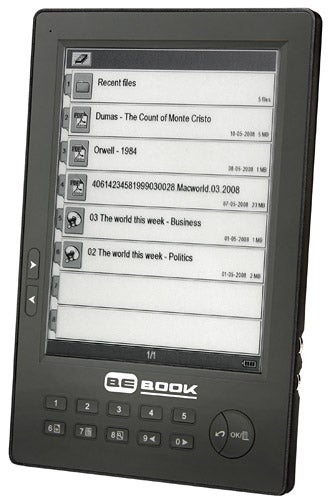 None of the ebooks on the market are exactly stuffed with internal storage, but with 512MB of memory this one has more than most. It also has an SD card slot at the top that accepts cards of up to 4GB in size, so storage space shouldn’t really be a problem.


The BeBook doesn’t come with any software. Instead, when you connect it to your computer it appears as a standard removable drive so you can drag and drop files onto it. A pretty wide variety of file formats are supported including pdf, mobi, prc, epub, lit, txt, fb2, doc, html, rtf, djvu, wol, ppt, mbp, chm, bmp, jpg, png, gif and tif. On the whole it did a very good job of displaying the various file formats and it handled PDF files better than the Sony did when we had it in for review. The mobipocket support is also welcome as it enables you to sync RSS feeds to the reader when it’s connected to your PC.

Unlike the other eBooks on the market the BeBook only supports USB 1.1 so file transfers are rather slow. It’s especially noticeable when transferring larger PDF or MP3 files to the device. If you’ve got a card reader you can get around the problem, but really in this day and age there’s no excuse for using USB 1.1 on a device.


As well as support for the document and picture formats, the BeBook also supports MP3 files and comes with a pair of in-ear headphones that connect to a standard 3.5mm headphone jack at the bottom of the device. MP3 is the sole audio format supported, and the audio player is very basic – it doesn’t even support ID3 tags or playlists. You do get some EQ presets (rock, jazz etc), but playback can be a bit glitchy on higher bit rate tracks. However, at least you can use the music player to listen to tracks while reading a book. 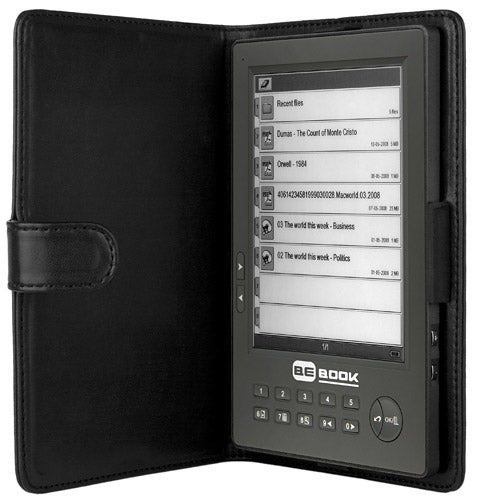 The BeBook charges via its mini USB port and there’s no charger provided in the box, which is a bit of an issue if you’re going to be away from a PC for a significant length of time. Battery life for eBooks are given in the number of page flips you can perform before the battery dies. This is because the devices only really draw significant amounts of power when they’re refreshing the screen. From a three hour charge the BeBook is good for 8,000 page flips according to Endless Ideas. As a comparison, Sony says the PRS-505’s battery lasts for around 6,800 page flips. In reality you’ll get around a week’s worth of relatively heavy use out of the BeBook before it needs a charge.


The BeBook is not a bad device. It supports a broad range of formats, has a good screen and long battery life. However, the interface is a bit hit and miss and in general the device feels a tad more sluggish than other eBooks we’ve looked at. The biggest issue, however, is that although it costs around £30 more than Sony’s PRS-505 it doesn’t look anywhere near as stylish and its menu system isn’t as polished. Given these issues the price difference is a pretty significant deal breaker.