Though it offered networking and a TV tuner to elevate it above the original WD TV Media Player, due mainly to its lack of format support we weren’t too impressed with Emtec’s Movie Cube S800. With its focus on digital TV and recording to a docked 2.5in drive, can the P800 make a better impression? 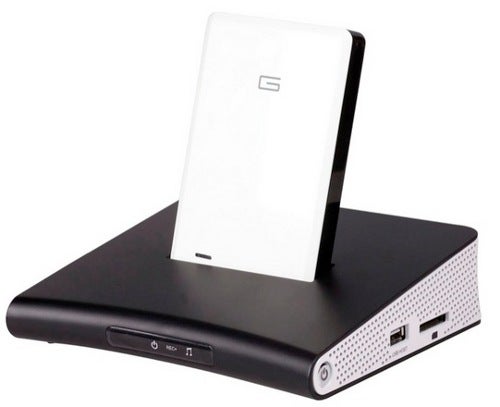 Emtec refers to the P800 main unit as a Docking Station because instead of an internal storage option, it features a slot in the top meant to hold the included Emtec 2.5in hard drive, which does rather limit the unit’s orientation options.


We like the Docking Station’s two-tone black-and-white finish, which is more rugged than that found on the S800. Though the white finish is glossy it doesn’t pick up fingerprints, and the black part of the unit is sensibly matt and textured. On the front is a nicely-integrated set of blue-backlit icons that show power, recording and music-playing states.

Connectivity is truly excellent. Aside from the external 2.5in hard drive slot at its top, this Movie Cube has a USB port and unusually, a memory card reader on its side which accepts SD/SDHC, MMC and MS-Pro. At the back we find a second USB port, 10/100 Ethernet, HDMI, optical and coaxial digital audio, composite in and out, component out and finally the tuner’s aerial socket.


However, all is not rosy. The hard drive slot has a proprietary connector that only works with Emtec’s Gdium-branded 2.5in drives (though you can plug other brands in using the USB connections on the back), and the HDMI port is only version 1.1. Build quality is also unimpressive, with the flap covering the drive slot showing obvious signs of wear after only a few insertions. The plastics for the casing also creak noticeably, and the small chromed power button on the side occasionally gets stuck after being pressed, requiring you to coax it back into its standard position. 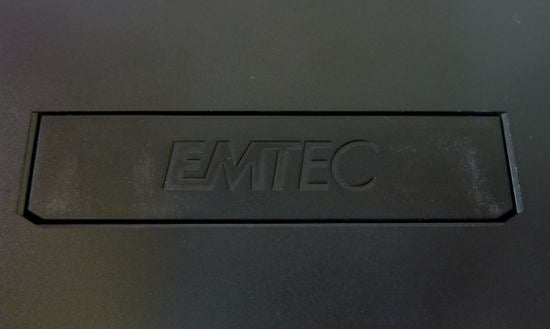 Similarly the provided remote looks impressive but in use there are a few niggles. While layout is fairly logical, some of the main controls are a tad stiff and its thin body isn’t exactly comfortable in the hand. Worse are the twin CR2032 cell batteries it uses, which are difficult to obtain and more expensive than the AAs or AAAs found in most remotes, and also eliminate the possibility of using rechargeable ones.

The P800 Docking Station does come with nearly every accessory you could need, including a component cable, SCART to dual composite/RCA cable, SCART adapter, aerial cable, three-way aerial adapter, USB cable, power supply and driver CD plus manual. The only thing missing is an HDMI cable, which is yet another black mark against the device.


A highlight, however, is the retail-boxed Gdium 2.5in hard drive that comes with every P800 (in capacities between 160GB and 500GB) and slides smoothly into its drive dock. Unlike the Docking Station itself, the slim 188g drive not only looks good but is well-built too. The top section is constructed using strong, glossy white plastic with a small violet activity LED, while the sides and base are a single piece of black textured metal. In keeping with this luxury there’s a neat black zipped carry case provided, though its rainbow trim won’t be to everyone’s taste. 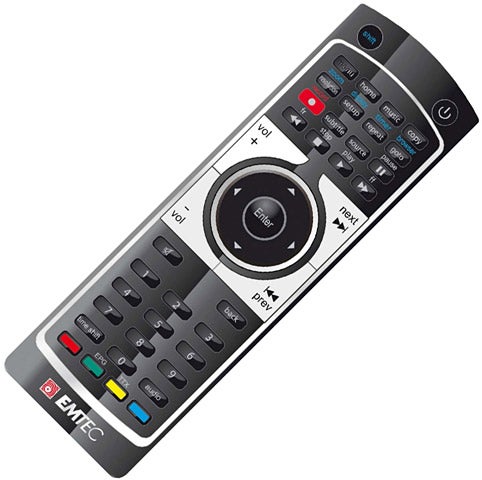 Unfortunately, turning the Docking Station on doesn’t inspire much confidence either, as we’re greeted by nearly the same uninspired and somewhat clunky interface as found on the Movie Cube S800, which suffered from slow menus and long loading times between. The only difference is that the ‘library’ menu – which scanned for media on the S800’s internal drive only – has now been removed, leaving the somewhat inelegant File Browser as the sole way of getting at your media – though when browsing you can choose between Music, Photos or Movies, which will show the corresponding files. Essentially, all the functionality and lack thereof, menu options and annoyances from the S800 are duplicated here.


Video can be set between NTSC/PAL or 720p/1080i resolutions, and does a reasonable job of scaling SD content to HD – however only 4:3 and 16:9 aspect ratios are supported so if using the P800 with a monitor it should ideally have a 1:1 mode. 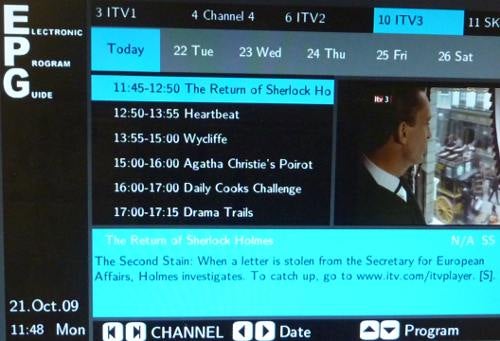 The P800’s integrated tuner lets you watch and of course record digital or analogue television, offering a ‘time-shift’ function so that you can pause, fast forward or rewind ‘live’ TV. You can also record from a source over composite, which offers inferior quality but does suffice for transferring over old video tapes or recording a console moment for YouTube. Emtec estimates you can get between 33 and 198hrs of MPEG2 recording on a 160GB hard drive, depending on quality.


Speaking of quality, we were pleasantly surprised with the decent picture the hybrid tuner produced despite the image being scaled. After adjusting both the Docking Station’s brightness and contrast down, colours were left fairly realistic and there was a minimum of noise or other artefacts even in analogue broadcasts. The EPG, meanwhile, is also a cut above most both in presentation and practicality – though unlike many it doesn’t allow you to see the content of the channel you were on when entering it.

Internet Radio was a bit of a let-down. It works well enough, but as with the Movie Cube S800 you can only browse by Station, Genre or Favourite, and the slow interface lacks any visual appeal. Networking functioned as expected, and the Docking Station had no trouble streaming a 1080p AVI file though navigation was particularly slow.

File format support is where the P800 really falls down though. Its audio capabilities are decent enough, including MP2/MP3, OGG and WMA Standard plus PCM, but there’s no sign of high-quality FLAC or other (less common) file types. Photo support is truly pathetic, with only JPEG and BMP. Though these are the most common formats, compare this to the WD TV Mini‘s JPEG, GIF, TIFF, BMP and PNG.


Meanwhile video is limited to AVI, MPG1/2, Xvid/DivX, VOB, DAT and IFO. That’s right, no support for H.264/MKV or most other high definition formats/containers; for HD you’re stuck with AVI and Xvid/DivX. Only subtitle support is fully up to scratch, with SRT, SMI, SSA, IDX and SUB on the menu. 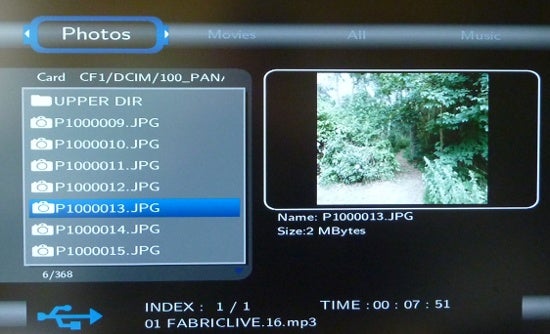 At around £150 for the 160GB GDIUM version or £170 with the 320GB 2.5in drive (the 500GB version is not good value at around £240), the question of whether the P800 presents good value isn’t exactly clear-cut. On average, high-quality 320GB 2.5in external drives are easy enough to find at £50, so you’re paying roughly £120 for the Docking Station. For this kind of money you can get the Asus O!Play HDP-R1 HD and a card reader with plenty of change left over, which offers format support for everything under the sun. However, there’s the TV tuner part of the equation to take into consideration, as well as the Emtec’s more extensive connectivity. 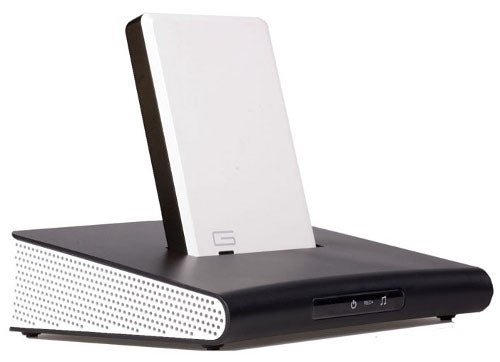 If you’re after these features, the main competition is Emtec’s own Movie Cube S800 and A.C.Ryan’s Playon! DVR TV. In the case of the former, you can get a model with a 750GB internal drive for £160, while the Playon! will set you back £150 without a hard drive (though this does include the wireless adapter). However, at this kind of price point we prefer the P800 since it’s completely silent in operation, offers a card reader and the additional flexibility of the portable HDD.


A good-looking device with a few unique touches, Emtec’s Movie Cube P800 Media Recorder is let down by poor build quality, a somewhat clunky interface and very limited file format support. However, at the moment it’s one of the best out of a mediocre bunch, so if its features are adequate for your needs it’s worth a look.