Watching me play Grand Theft Auto IV during the last few days, my wife has been wondering why so few games involve good people doing good deeds. Why, she asks, can’t someone make a game as rich and immersive as a GTA, but with someone doing something positive for a change? While I was too busy backing over the cop whose car I’d just stolen to pay too much attention, I had to agree. Wouldn’t it be great if more games arrived starring firefighters, doctors, ambulance drivers and police officers (and not just loose-cannon cops who shoot suspects in the face, either). 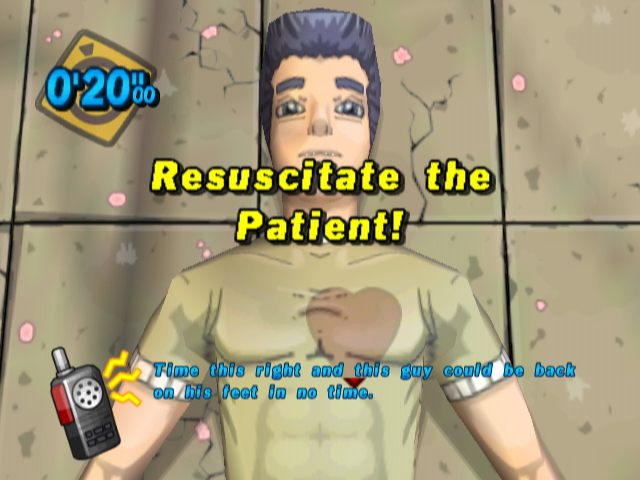 Coincidentally, a game recently arrived through my letterbox that seems to be thinking along similar lines. Emergency Mayhem features all three emergency services in an effort to tackle mayhem on the streets of a troubled American cartoon city. I guess you can work out where the title might stem from.


At first glance, I had the game pegged as a cartoon, GTA-style sandbox game where you choose which service you want to play as, then roam one of the game’s four areas looking for criminals to catch, fires to put out or people in need of urgent medical help. In fact, it’s more like a cross between Sega’s old Dreamcast classic Crazy Taxi and the more familiar Wii fodder of Rayman Raving Rabbids or Wario Ware. Driving a police car, a fire engine or an ambulance, you’re faced with a mayhem meter and a countdown. Scattered around the area you’ll find a number of markers which trigger missions. Completing missions successfully adds time to the countdown and pushes the mayhem meter towards the green end of the scale. Driving aimlessly or failing missions will take the meter in the wrong direction and cost you valuable time. 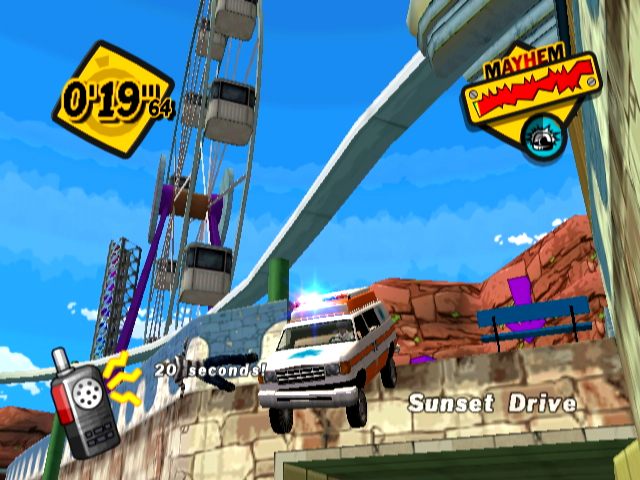 The missions themselves are divided into two basic types. First, you have your Crazy Taxi-style runs from one place to another. Whether you’re delivering organs in the ambulance or going to arrest some felons in the cop car, the aim is basically the same: get from point A to point B before the timer runs out. In a few cases, you’re asked to carry something fragile, in which case the game is rather more lenient about the time, and you also get the odd car chase mission when you’re playing as the police. Whichever vehicle you’re in and wherever you’re going, the trick is navigating the streets, dodging the traffic and knowing the shortcuts – if you’ve played Crazy Taxi or even Burnout Paradise or GTA, you’ll get the idea. It’s a little odd, however, that you can run over so many pedestrians with only the odd chastisement from your controller on the radio to deter you.

Second, you have the sort of mini game we’re getting all too used to on the Wii. You know: shoot down the balloons carrying fairground punters skywards; pump up the tyre or put out the blaze by pumping the Wii remote up and down; pick which wire to cut to defuse a bomb; guide a fly out of some poor guy’s stomach with the remote. As always, these are a mixed bag, depending on what you’re doing and how well implemented the remote controls are. Fly guiding is a nightmare as you struggle with an over-sensitive control system, while the game where you have to crank a handle to shoot down a fire hydrant is a worryingly hit or miss affair. Balloon shooting and monkey blasting are fun, but we’ve seen this sort of thing done better by the Raving Rabbids games. 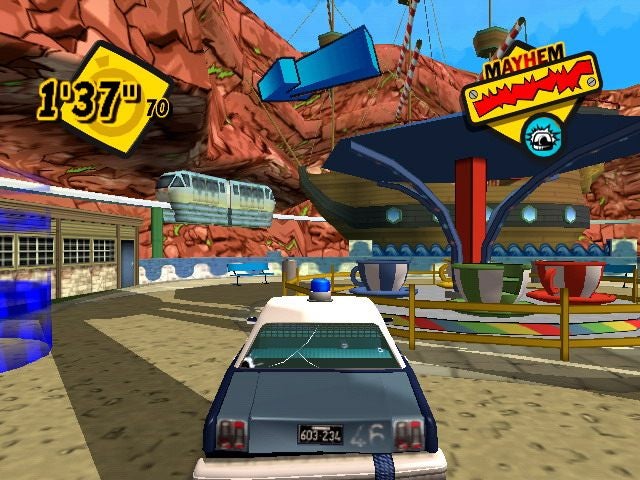 Despite a decent handling model and reasonably packed streets, there are problems with the Crazy Taxi bits as well. For one thing, there’s no mini-map, meaning you have to rely on a single guiding arrow and your own knowledge of the area to get you from A to B fast. In fact, the street layouts are too complex and the arrow too vague to be really useful, so it’s one of those games where you’ll just have to keep trying until you have a working map in your own noggin. 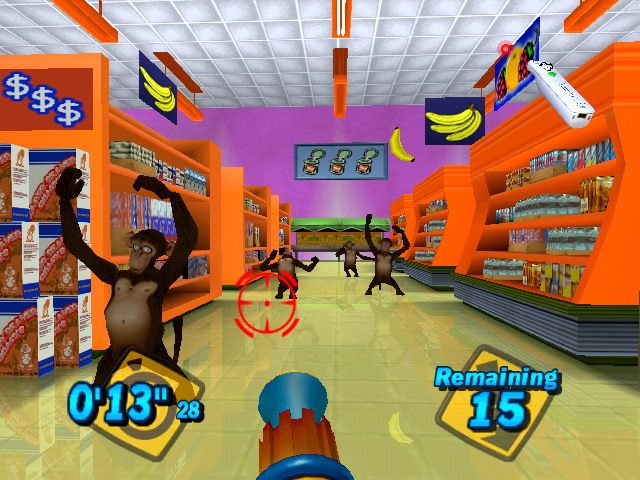 Unfortunately, you’ll get plenty of time to put that together. Whether you’re playing as the cops, the ambulance or the fire services, you have to fill the Mayhem gauge within the single main time limit or it’s game over and you find yourself back at square one. To start with, the limit is generous and the game throws around a whole mass of time extension tokens to help you out. However, as you unlock more areas you have more to do in that time and you’ll find yourself repeating the same set of missions over and over and over again. 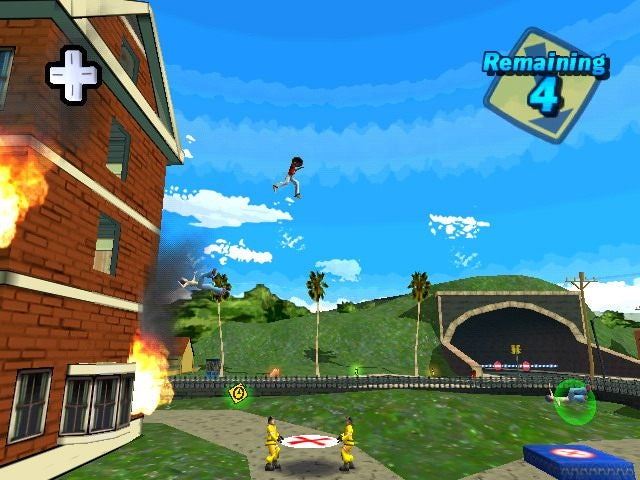 The good news is that you’ll get faster at them with each try, but given the amount of repetition within each area it helps the game get slightly dull a bit too soon. What’s more, there’s little bar the road layout, the background music and the scenery to distinguish one area from the last. While a few additional mini-games are lobbed in with each new area, you’re still basically doing the same stuff whether you’re on the coast or in the suburbs. 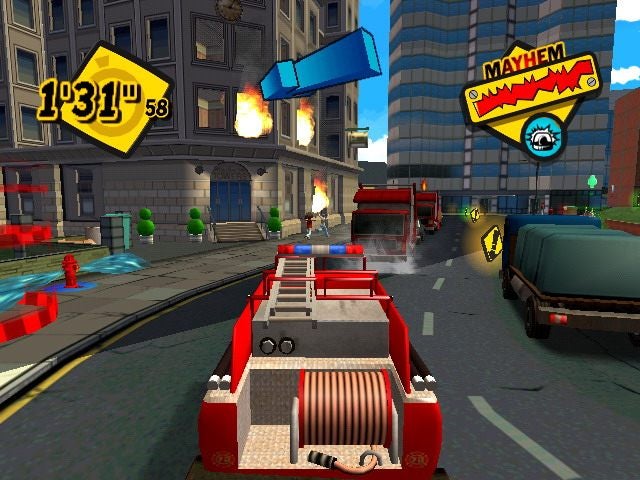 This, then, is another Wii game killed by lack of long-term appeal and variety. There aren’t enough mini-games to go around, and the basic gameplay is a case of familiarity breeding contempt. Things even go wrong in the multiplayer ‘Party’ mode, where you’re restricted to single game challenges and tournaments using only five of the available mini-games – and that’s only if you’ve unlocked them in the single-player mode first. In the past, games like Crazy Taxi could get past such limitations by working as a score attack game, but Emergency Mayhem just isn’t compelling or addictive enough to make that work. 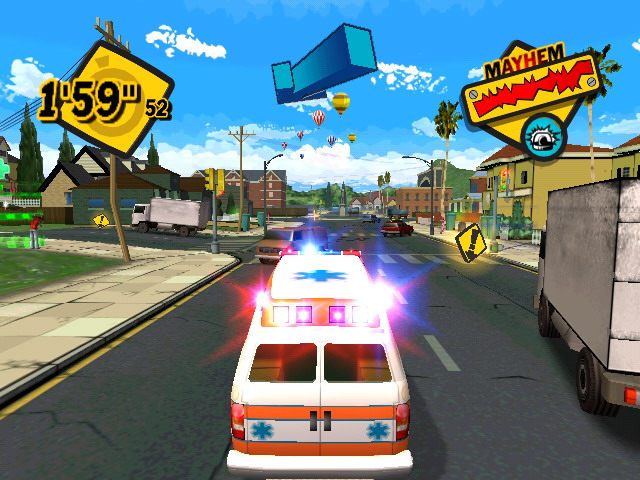 It’s a shame, because the basic concept isn’t bad, and the presentation is reasonably good. True, the graphics don’t even put Crazy Taxi to shame, let alone Burnout Paradise or GTA IV, but at least the cel-shaded visuals have a nice clean look and there are some charming small touches in the scenery. Music is another good point, with quirky or dynamic themes for the various services and mission types. All the same, Emergency Mayhem isn’t the game to make doing the right thing seem attractive. It’s not even the game to make doing the right thing fun. Maybe crime doesn’t pay, but it certainly plays a lot better than this.


A quirky Crazy Taxi/Mini-game hybrid that doesn’t quite come off. Whether you want mini-games, party action or a quick arcade fix, you’ll find better action on your Wii elsewhere.