Despite spending most of my week fiddling the latest and greatest hardware, my office machine is actually decidedly ordinary, with a single core 3GHz P4, an 80GB hard drive and 2GB of system memory. Considering I only use it for e-mail, word processing and watching the occasional video, it’s not surprising. This machine will do pretty much anything I throw at it, possibly helped by the fact I’m running Fedora Linux, but probably not.


The large majority of people do exactly what I do, and even to some lesser extent, as I’m quite a heavy multi-tasker (hence the extra system memory), yet I still see many people buying expensive hardware that they don’t really need.


Over the past few years, hardware has obviously moved along, processors are faster and with multiple cores, graphics cards are faster and producing better looking games than ever before. However, word processing and spreadsheet software hasn’t become any more demanding than it was 10 years ago. A budget machine of today is yesterday’s top dog. Unless you are gaming, or doing a lot of video encoding, there really is no need to spend a fortune.


So for the large majority of people who just want to get some work done without breaking the bank, I introduce the eMachines E4056, priced at a lowly £270. 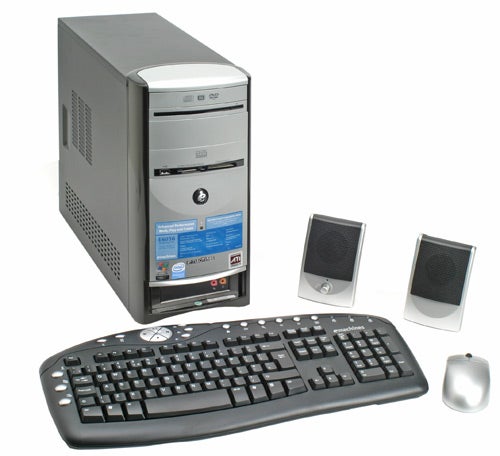 For a budget machine, it doesn’t look bad at all! It’s in a MicroATX form factor, so it’s small and tidy, easy to move around and should fit on even the most cramped of desks.


On the front of the case, there is a single USB 2.0 port, 9-in-1 card reader, headphone output and microphone input. Strangely, the headphone output is orange instead of the standard green. There is no reset button, but just a large central power button with a blue LED behind it. A reset button is not necessary, as a power button held down for long enough will shut down even a crashed machine.


The DVD burner is 16X, which is the fastest currently available. This actually has a custom fascia to match the silver front of the case. Considering the price, that’s quite a luxury. 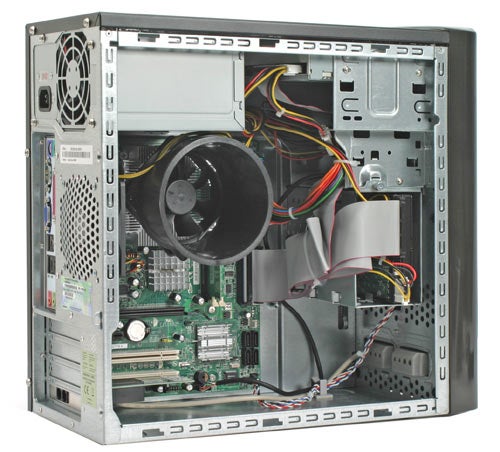 Inside, things are very tidy indeed – but then for a simple computer such as this, it is hardly difficult. A few things spring to mind when looking inside the case. First, is the ducting – making sure that the CPU is supplied with fresh air from the outside. This is a large reason why the computer is so quiet too, barely a whisper can be heard from the machine. There is a secondary 80mm fan at the back of the case, exhausting the hot air.


The hard drive is only IDE, but the performance impact of this is negligible and it helps keep costs down. This means there are four SATA ports free, should you want to upgrade. There is only 512MB of DDR system memory and this is in one stick, so there isn’t any dual channel memory mode available. Personally, I’d want to put at least another 512MB in anyway, for 1GB. Unlike most full-sized systems though, there are only 2 DIMM slots.

Although the graphics are onboard, thanks to the ATI Express 200 chipset, there is also a PCI Express 16x slot should you want to put in a better graphics card. Although a 3.06GHz Pentium 4 is plenty of grunt to power a decent graphics card, the power supply will almost definitely be up to the task. For starters, there is no 6-pin connector! So be aware that you will probably have to change the power supply in order to get a faster card working. 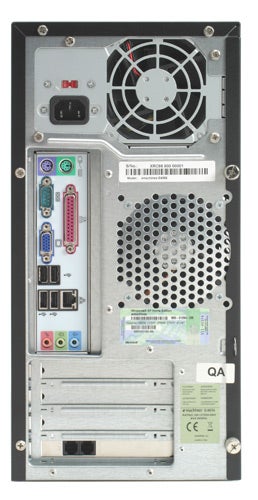 From the back, you can see the limited connectivity. Sound is provided by the Realtek ALC861 chipset, and is naturally HD. However, there is only enough connectivity for a 5.1 setup and there is no digital output.


There are four USB 2.0 ports, 100Mbit Ethernet, two PS/2 ports, a serial port and a printer port. Naturally, because of the onboard graphics, there is a D-SUB port too – but no DVI. There is even a 56K modem, for those still stuck in the dark ages. 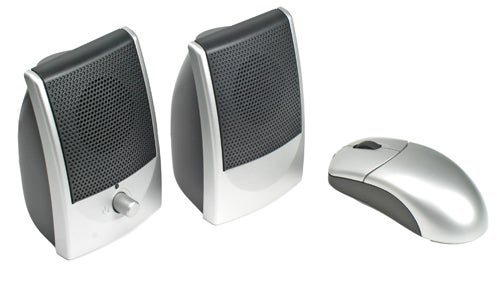 Keyboard, mouse and speakers are included. These aren’t anything particularly special, but you’re only a monitor away from a complete machine. For full specifications of this machine, follow this link.


Performance was fine. With an overall Sysmark 2004 score of 137, this is close to the speed of the Compaq Presario SR1719UK.


For our own 2D benchmarks, we compared to the budget Core 2 Duo E6400. This is the 2MB version of the processor running at 2.13GHz. You can draw your own conclusions from the results, but the difference is astonishing – but with two cores, you’d expect so.


When writing this review, the first thing I did was chase up the price. Staples told me £270, but that there were only 18 in the whole of the UK and that it was going to be a discontinued product. This kind of puts a damper on what is otherwise a great machine. What it does prove, is that for under £300 you can get a decent machine, and that emachines are building good ones.