Available on PC
Elite was a touchstone for a whole generation of gamers, taking us to galaxies beyond the 8-bit arcade adventures and coin-op conversions we knew and loved, and into a sophisticated universe of deep-space dogfights, piracy and trading. The hours we spent, running goods both legal and illegal between systems, attacking haulage ships and scooping up their cargo, fending off squadrons of bounty hunters and buccaneers, dropping out of hyperspace to battle the mysterious Thargoids. We played it endlessly, dreaming of a day when some unforeseen generation of computers would take Elite from the realms of wireframe graphics and make it look and feel even more real than it did.

It didn’t happen with the clunky Frontier: Elite II or the patchy, prematurely-released Frontier: First Encounters, but with Elite: Dangerous that dream is close to coming true. This is as faithful a version of Elite as you could imagine, though on a much larger scale and with the benefit of modern physics and graphics technology. It looks and feels different to the 1984 original, but there’s a tangible thread running from one to the other; something visible not just in the shapes of Elite’s iconic spacecraft – still recognisable from their primitive wireframe ancestors – but in the fabric and texture of the game. 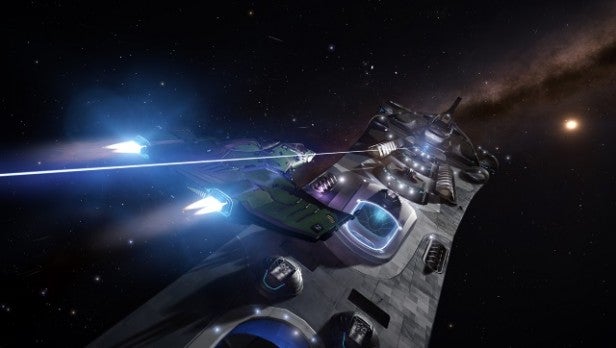 To say that Dangerous doesn’t hand things to you on a plate would be an understatement. Like the original, you’re dumped at a remote space station in a basic, poorly-armed spacecraft with 1,000 credits to your name and a galaxy to explore. What you do from there is up to you. There’s no unfolding storyline and no long-term objective beyond the accumulation of more credits and the urge to climb the combat rankings. You want to be rich? You want to be Elite? Well, what are you willing and able to do?

Well, to do anything you’ll need to make money, if only to buy ship upgrades and new weapons and – eventually – replace your ship. You can trade, buying goods in one small outpost or vast space station then taking it to another, either in the same system or one within easy reach. You can take missions from the ship’s bulletin boards, taking goods to a different system or sourcing requested items and bringing them back. You may even be asked to go take on bandits or troublemakers in another system, or tackle reconnaissance missions in a rival faction’s space. Alternatively, you can take yourself to a handy relay point and attack wanted commanders for their bounty money, or harass poor merchants in the hope of stealing cargo. 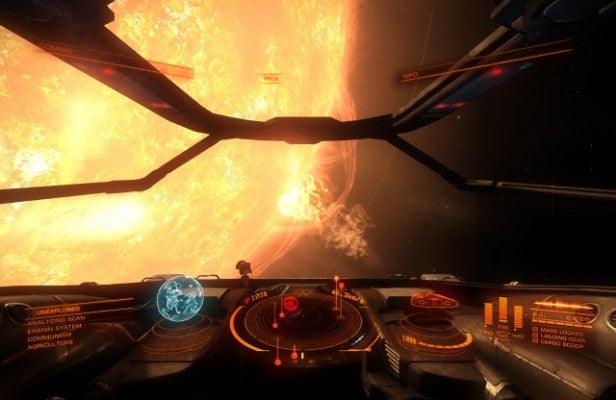 And to do any of that, you’re going to have to master three things. The first – and the easiest to get your head around – is combat. Dangerous hits a nice middle ground between the unrealistic but enjoyable dogfighting of the original and the more realistic physics of the sequels; it feels authentic, but the manoeuvres for keeping the enemy in range and in your sights are fairly easy to get your head around. Your first weapons – dual pulse lasers – are practically useless, but start packing multi cannons or a missile rack and you can start tackling weaker adversaries with a little more confidence. It’s no X-Wing vs Tie-Fighter, but it’s good.

The second is long-distance travel. With Dangerous, Frontier Developments have done their best to model the vastness of space with accuracy, using a combination of hyperjumps and a frame-shift drive to hop between systems and make the distances within them manageable. Hyperjumps aren’t much of a problem, but the frame-shift drive is a different matter. Without it you won’t get anywhere, but using it involves charging it up, travelling to your destination, then slowing down in time to come cleanly out of frame-shift when you’re moments away. Leave it too soon and you’ll have to go back in to make up the last few light-seconds. Leave it too late and you’ll overshoot the mark. After the first few hours it gets easier, but expect some frustration while you’re getting used to the whole idea. 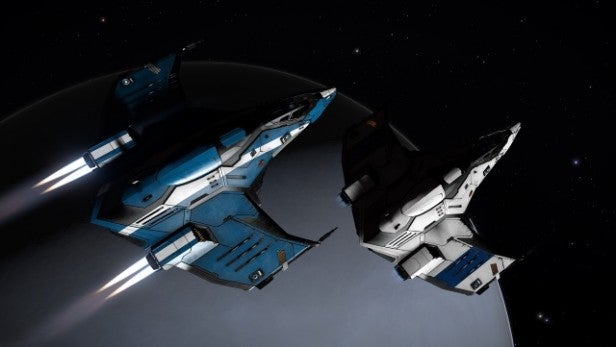 The final challenge is docking. Some space stations require you to enter through a narrow slit in the rotating outer shell – itself no easy feat, though a lot easier than in the original Elite. All require you to manouever onto a specific docking pad, ensuring that your ship is facing in the right direction. Again, this is something you’ll master with practice, but that can leave you flummoxed early on. It doesn’t help that the tutorials don’t exactly do a fantastic job of explaining many things – and don’t even bother mentioning the crucial ‘facing in the right direction’ bit.

Now, there’s a great game inside Elite: Dangerous. It does a fantastic job of immersing you in a universe where you’re flying in a tiny spacecraft across vast areas of space, alone, unguarded and in the most hostile environment known to man. Docking and combat can be exhilirating, and there’s a real sense of freedom about its go where you like, do what you like ethos. And while there isn’t one storyline, that doesn’t mean there are no stories. By picking factions, taking missions and fighting with or against the authorities, you’re stamping your own mark upon the galaxy. 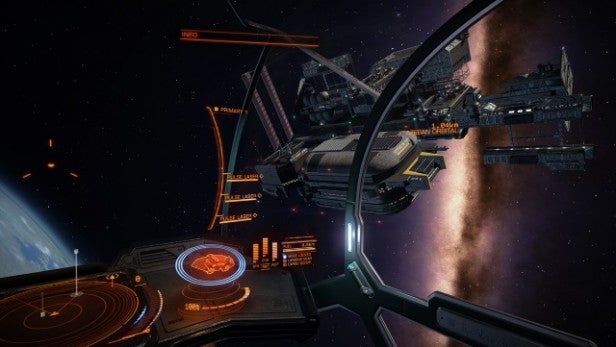 But it’s a hard job finding that game. The learning curve is one of the steepest we’ve encountered, and so much about the game is spectacularly inaccessible. You might just about be able to work out the basics of trading on your tod, but to get anywhere in any other path will inevitably mean consulting FAQs. What you have to do is often so fiddly, or involves purchasing additional equipment, that you’ve got virtually no hope of figuring much of it out on your own. While it’s great to see a passionate community doing its best to get new players on the right track, it shouldn’t really be necessary.

There’s a lot of frustration in the early hours, too, partly because your sidewinder starting ship is so limited.  You’ll find yourself with cargoes you can’t sell because your frame-shift drive won’t let you reach anywhere where you can sell it without hopping from system to system for the best part of an hour. We’d advise sticking to simple items you can trade between neighbouring systems to start off with. Then you’ll find yourself tasked with chasing pirates or rebel transmissions in unpopulated systems, but find that the pirates are nowhere to be seen while the transmissions are impossible to track down. Much as I admire Dangerous’s decision not to grab your hand and drag you through the game, at times it seems to be actively pushing new players away. 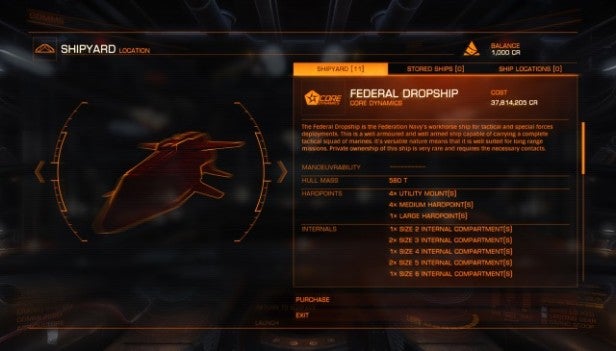 And, my, is it dry. It can look stunning, as spinning space stations fill your view with ships flying in and out of dock, but it’s a game that thinks all news, missions and contact with non-player characters is best delivered through the medium of text. While there’s actually a lot going on, the lack of drama and personality means one system, one space station, one outpost soon starts to blur into another. We don’t expect cut-scenes or animated faces all the way through, but Dangerous could badly do with a bit more character, There’s a whole galaxy here to explore, but will any but a dedicated few keep exploring it?

With the game in its current shape, we’re not sure. There’s plenty of scope for future updates, with mooted planetary exploration or first-person, on-foot antics, but as it is it feels oddly empty. When we played Elite on the old 8-bit home computers we didn’t mind using our imagination to fill in the blanks and populate the universe; the trade, space combat and exploration was enough. Nowadays, though, we need a little more to keep us locked in a game’s world. It’s not that Dangerous isn’t compelling but it can also be dull. It doesn’t seem to matter whether you play it solo or in an open, shared massive multiplayer world; there’s not enough life out there among the stars. 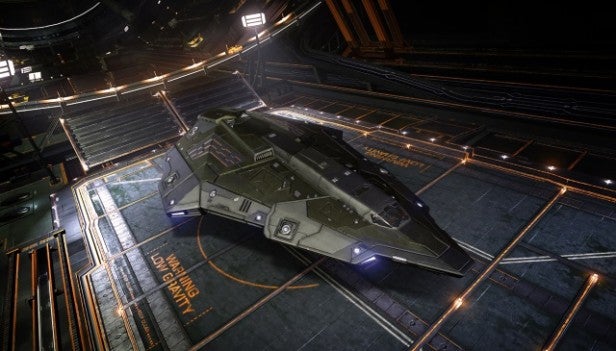 That’s a shame, because the more you play Elite the more you glimpse how magnificent a space simulation it could be, and – with a bit more time and effort – might one day become. Those with grit and determination to push through the game’s barriers may well discover something amazing. If only it didn’t involve so much hard work.

Verdict
Elite: Dangerous does a fantastic job of recreating the original game’s atmosphere, and its core space combat and trading systems work brilliantly. However, while on the one hand Frontier has crafted a space sim of incredible depth and grandeur, on the other it’s made it so dry and inaccessible that you really have to graft to find it. Those with the drive and determination should still sign up – your hours of toil will be rewarded – but prepare for a steep learning curve and some awkward times along the way.