No, I wasn’t being tortured. I haven’t been arrested and taken off to Guantanamo Bay. I did it of my own free will, and I found the experience compulsive, energising – even oddly moving. This, my friends, is the magic of Elite Beat Agents. 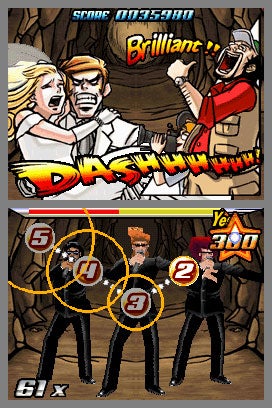 Here’s the utterly bizarre setup of Nintendo’s latest DS masterstroke (well, not that ‘latest’ if you imported the original Japanese version, Osu! Tatakae! Ouendan, or the US version last year). Somewhere in the world, there’s a global task force designed to support folks in need of help. Despatched by Command Kahn, the Elite Beat Agents are a three-strong squad on a morale-boosting mission. Through the medium of dance, they inspire those in a dilemma to do their utmost, and get through whatever situation they find themselves in. If their performance is of Jackson/Timberlake proportions, no problem is unconquerable. If, however, it’s more along the lines of your dad, slightly drunk, at the disco, then the helpees whole life is basically doomed. 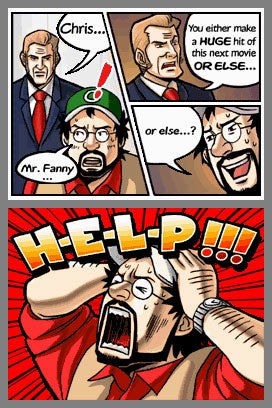 How can you help? Well, the top screen of the DS is used to show simple comic-book style animations of the unfolding story, while the bottom screen shows your agent’s smooth (or otherwise) moves. Each mission is set to a particular song, and as the song plays numbered spots appear in time with the major beats. You click on the spot at the appropriate moment – there’s a handy shrinking ring around it to help you with your timing – and then move onto the next. However, EBA goes beyond normal rhythm action game conventions by introducing a second mechanism, the Phrase Marker, where you click on the spot then trace the movement of a rolling ball across a path to the next one, and sometimes back again. Stay on the ball and time it right, and your guys pull off a dazzling move in style. Take the stylus off the ball, and they fluff it and fall flat on their faces. Finally, there’s the Spin Marker. When the spinning wheel appears, you rub the stylus round in circles as if you’re on a mission to wear away the touchscreen in the hope of gaining vital bonus points.

The key to EBA’s success isn’t just that it has all the foundations of an excellent rhythm action game – the sort of game where you compulsively repeat missions just to get each beat perfect and chain together every sequence with precision – but the brilliant way in which it ties each song together with a story. Before the song starts you get a storming dual-screen, comic-book cut-scene explaining the dilemma, and as the song progresses the game breaks off to show you how your team’s inspirational dancing is affecting things. Groove with real flair through a section and you’ll see your protagonists triumph. Scrape through, and you’ll see them suffer for your mistakes. The final outcome, too, depends on your display of skill throughout the mission. Make enough mistakes, and your men collapse and you’ll have to do the whole level from scratch, but it’s quite possible to just about complete a mission only to see a tragic-comic ending. 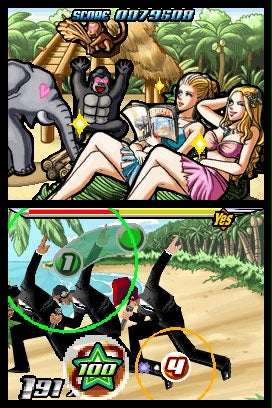 Now, the songs give you a pretty good line-up, ranging from the punky US rock of Sum41 to Madonna’s Material Girl, Earth, Wind & Fire’s September and Jamiroquai’s funky Canned Heat. They’re all cover versions, but all played well enough that you’re not horribly distracted by the odd difference. The stars, however, are the stories. Frankly, whoever came up with them and their different permutations is something of a whacked-out genius. They start weird and keep getting weirder. One minute you’re helping a Hollywood director through a potentially career-ending project, the next you’re helping the spoilt heir of a Japanese car corporation turn ninja and retrieve secret plans for a hot new model from a rival company’s HQ. You could also be helping a struggling babysitter go steady with her dumb jock boyfriend, a magician and his assistant foil a casino robbery, or a broken Texan billionaire regain his wealth. 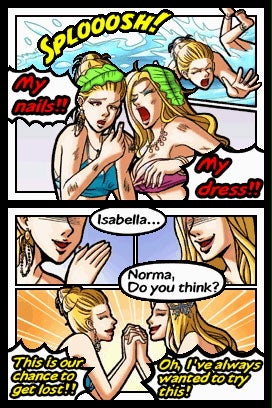 There are too many riches here to count, but two stand out for me. In one of the most unhinged game missions known to man, you’re expected to reunite a small girl and her mother with the spirit of their dead father. It’s played out to the aforementioned Chicago track, and somehow manages to wring every scrap of pathos out of the wretched Peter Cetera lyric. On one level it’s utterly horrifying, yet on another strangely touching. After that, you’re only too ready to re-assert your masculinity (or just come to your senses if you’re a woman) and storm through Deep Purple’s Highway Star. This time, you’re aiding a small pug-dog who has been separated from his owners. Rocking out as he races down the road, grabbing lifts and doing good turns, only you can ensure they’re reunited. This might just be the finest joining of game and hard rock outside of a Guitar Hero game. Go on, lil’ doggy, I’m there with you. “I love it…” bam “and I need it..” bam “I bleed it” bam, bam, bam, bam. “Yeah, it’s a wild hurricane/Alright, hold tight/ I’m a highway starrrrrrrrrrrr!!!!!”

Incredibly, it all finally culminates in a full-scale alien invasion. And even when you’ve worked your way through the available tracks, there are reasons to return in the shape of unlockable bonus tracks, agents and an alternative, all-girl dance team. Plus there’s a decent multiplayer mode, in which two teams of agents can either cooperate on one of the single-player missions, or go mano-e-mano in specially designed versus scenarios. Having battled it out with high-strung chefs and intergalactic fighter pilots, I can tell you that these are every bit as enjoyable as the missions in the single player game. 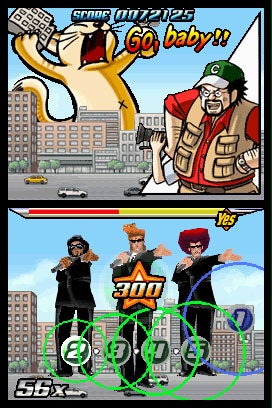 All in all, EBA is another awesome DS release. Like any rhythm action game, there are some questions over its lifespan. No matter how much time you devote to getting every point perfect or trashing your mates in multiplayer, you’re bound to eventually get sick of the same nineteen songs. However, I suspect you’ll get an awful lot of enjoyment out of it before that happens. Like Katamari Damacy or Guitar Hero, EBA is filled with the sheer, stupid joy of gaming, and held aloft by its infectious humour and exaggerated sense of fun. It’s the sort of game that will make you feel better about taking your morning trip to work or coming back from that bad day at the office. For that reason alone, I feel like shaking each and every one of you until you agree to buy a copy, or demanding that the government dispense it on the NHS. Still, given that things are as they are, I guess neither is an option. You’ll just have to take the initiative yourself. Do so, and the only thing you’ll have to worry about is whether or not you’re mouthing along with the words…


If you’re feeling down and gloomy, Elite Beat Agents will bring you all the ‘in-spur-a-shun’ you need. If you haven’t picked this up already, pick it up right now.