What is the Elipson Prestige Facet 6B BT?

The Elipson Prestige Facet 6B BT is the latest addition to the French manufacturer’s Prestige Facet range. The Prestige speaker has been around for over 40 years, but the company recently gave the range an upgrade, adding numerous new features.

These upgrades include double-layer lacquered fronts, improved damping materials, steeper crossover filters, and a diamond-shaped sculpted ring that surrounds both the tweeter and the woofer. The latter feature isn’t just cosmetic, it actually ensures a more focused sound.

In fact, the multifaceted nature of the rings is so important to the sound quality that the range is actually named the Prestige Facet. The 6B BT is the baby of that range, and comes with an integrated amplifier, built-in Bluetooth (hence the BT), and a Google Chromecast Audio dongle thrown in for free.

Connected High-Fidelity is the name that Elipson has given to this combination of speaker, amplifier and Bluetooth, and the intention is to deliver streaming music in stereo and at as high a quality as possible. That’s a noble ambition, but how does 6B BT sound in reality?

The Elipson Prestige Facet 6B BT basically looks like a normal pair of speakers from the front, with very little to reveal that one of speakers contains more than just a tweeter and woofer.

The design is classic two-way, with a tweeter on the top and a woofer underneath, while around the drivers are the facet rings that look like cut diamond. The only clue from the front to the system’s true purpose is an IR receiver on the active speaker, but even that identifying feature is hidden by the magnetic black cloth grilles. 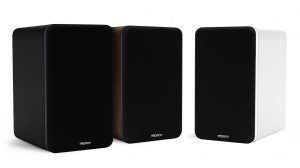 The design is attractive, with a lovely lacquered finish and a dark silver trim around the tweeter and woofer. The facet rings and drivers are black no matter which finish you choose, and there’s a choice of three: black, white, or black/walnut. 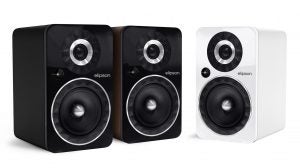 The latter is particularly nice with the double-layered front in black and the rest of the MDF cabinet in walnut. The overall build quality is excellent, and the passive speaker weighs 5.6kg, while the active one is 7kg.

If you move around to the back, you’ll find a bass port and, in the case of one of the speakers, a set of binding posts. This is just a normal 6B, which is why there are dual binding posts, even though you only need two to connect to the active speaker.

It’s this speaker that’s really interesting, and here you’ll find the connections and controls. There’s a stereo analogue input that uses RCA connectors, and has a switch for choosing phono or line input. There’s even a ground terminal, so you can use the 6B BT directly with a turntable. 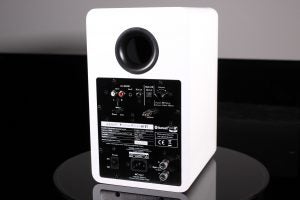 There’s also an optical digital audio input and a 3.5mm auxiliary input. You can use the latter to connect the Google Chromecast Audio dongle to the Elipson; it’s not the tidiest solution, but it gets the job done and allows you to stream music from your smart device. The 6B BT includes an RCA subwoofer output, so you can connect an active sub if you want to create a 2.1-channel system. There are outputs for the left-hand speaker, which you connect using the included speaker cable, but you can also use your own. 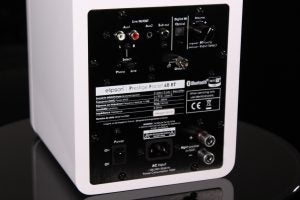 The only other connection is a three-pin socket for the power cable.  There’s also an on/off switch, and a volume dial, which has a triple function. Turn it left or right and you can change the volume, give it short press and you can cycle between inputs, while a long press activates Bluetooth pairing. 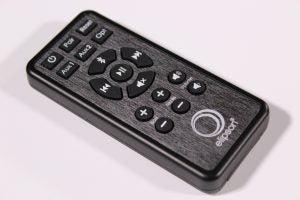 Elipson ships the speakers with a remote control, which is rather small but reasonably effective. It has a brushed metal effect that complements the speakers, and includes all the necessary buttons to control them. You can turn the 6B BT on and off, choose inputs, change volume, mute the audio, activate Bluetooth pairing, adjust the bass and treble, and control playback.

The Elipson Prestige Facet 6B BT is composed of two high-quality speakers, which means you will get proper stereo separation. The active speaker in the pair has 140W of Class D amplification, which should be more than enough. If you feel the need for a bit more low-end, there’s a subwoofer out, so you can add an active sub and create a 2.1-channel system.

The speakers use a 1-inch tweeter and a 5-inch driver, installed in a classic two-way configuration. There’s a rear bass port and the cabinets have internal bracing, combined with a double-layered and lacquered front panel, MDF construction, and a vinyl veneer. 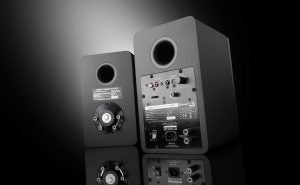 As already mentioned, the 6B BT has phono and line analogue audio inputs, an optical digital audio input, and a 3.5mm jack. As a result you can connect turntables, CD players, TVs, Blu-ray players, and just about any other audio source to the system.

The big selling point of the 6B BT is the inclusion of built-in Bluetooth with aptX, which allows for CD-quality streaming of high-resolution music files from a paired device. Since Elipson is so focused on sound quality, I’m surprised it didn’t include Wi-Fi as well. As an alternative, the company includes a Google Chromecast Audio dongle free of charge, but it isn’t the most elegant solution.

The Elipson Prestige Facet 6B BT speakers are simple to set up: you merely position them on a solid surface or stands and connect the passive unit to the active one using the cable provided. Elipson has even usefully identified which speaker is the left and which is right. The facet rings are designed to make the sound waves more focused, so you might want to experiment with some toe-in.

Once you’ve set the speakers up, all you need to do is connect your sources. I tested the 6B BT with an LG 65C8 OLED TV and an LG UP970 4K Blu-ray player by swapping the optical digital input between the two, and I also paired an iPhone X and a Samsung Galaxy S9+ using Bluetooth. Pairing is a piece of cake: just press the button on the speaker or remote, and then select the 6B BT on your device.

The first thing to point out about the Elipson is that because it’s composed of two speakers, it can deliver a genuine stereo experience, with proper separation between channels and thus precise imaging. As a result the audio performance is vastly superior to any single-unit speaker, so while the 6B BT might not be quite as convenient, it sounds a lot better.

And boy, does it sound good; these are undoubtedly hi-fi speakers with a beautifully open and accurate sound that is free of any colouration. The Prestige range is famous for its neutrality, so what you put in is basically what you get out. That means great recordings will sing, but there is a downside to this sense of fidelity – poor recordings will still sound poor.

The large and well-constructed nature of the speakers means the bass is deep and solid, the mid-range is perfectly represented, and the higher frequencies are carefully woven into the soundstage. It’s a big, full-fat sound that really delivers, and thanks to the powerful amplification, the 6B BT can also go very loud without losing its composure.

Listening to Suede’s new album The Blue Hour was the ideal test of the system’s ability to deliver the artist’s intentions. The speakers perfectly rendered the epic sweep of the album’s sonic landscape, while the deep bass provided an ominous tone to the choral arrangement in the opening track.

Instruments were placed with precision across the soundstage, thanks to the excellent stereo imaging, and Brett Anderson’s singing remained clear and focused within the complex layers of the mix. There was a sense of majesty that normal Bluetooth speakers simply can’t convey, but the Elipson had no problem delivering.

The included Google Chromecast Audio dongle isn’t the most elegant solution, but on the plus side, it sounds very good. You can cast audio, including high-res up to 24/96kHz, from your smart device, and the results are genuinely impressive. The flexibility of Chromecast is an added bonus and any streaming service, along with a host of other apps can be cast via your smart device to the Elipson.

The fact you can connect your TV via an optical digital cable means you can also use the 6B BT as an alternative to a soundbar. The C8 sounds great for an ultra-thin TV, but adding the Elipsons on either side raised the audio to another level.

The soundstage was wider, the mid-tones crisper, the high end clearer, and the bass deeper. As a result, music and effects had greater impact, while dialogue remained clear and focused on the screen. If you have an active subwoofer, you can even add that to create a 2.1-channel system and really give the low end a boost.

The Elipson 6B BT might be marketed as a Bluetooth speaker, but in reality it’s a genuine hi-fi system that can deliver the kind of sweet treble, precise mid-range, and deep bass that is sure to please even the most discerning of audiophiles.

Why buy the Elipson Prestige Facet 6B BT?

The Elipson Prestige Facet 6B BT delivers an awful lot for its £499 asking price. It’s a classy and extremely well-made Bluetooth speaker that sounds fantastic. The emphasis is very much on quality, from the design and connections, to the components and performance.

The wireless capability might get the headlines, but this effective two-channel system can also be used with a turntable, and if you hook it up with a TV and add an active subwoofer, you’ve got yourself a great little 2.1-channel setup.

There’s very little to criticise where the 6B BT is concerned, with only the lack of integrated Wi-Fi and multiroom worth mentioning. However, Elipson have pre-empted that to a degree by including a Chromecast Audio dongle that you can connect to the audio input.

If you’re looking for alternatives, then the Ruark Audio MR1 Mk2 is certainly worth considering. It’s cheaper than the 6B BT at £329 and isn’t as big or as well made, but it offers a very similar two-channel experience with Bluetooth built in. The MR1 Mk2 is neat, versatile, and sounds great, making it a cracking little option.

The Elipson Prestige Facet 6B BT is the choice of the discerning audiophile. This well-made and powerful Bluetooth two-channel system looks good and sounds even better.