This excellent all-in-one system has everything except built-in Wi-Fi, so add some speakers and you're good to go

What is the Elipson Music Centre HD?

The Elipson Music Centre HD is a two-channel audio system that includes a CD player, Bluetooth aptX, and an ICEpower digital amplifier. There’s a decent set of connections, and Elipson even throws in Google Chromecast Audio free of charge to help expand the Music Centre’s flexibility.

All you need do is add a pair of speakers, and you should have a very capable all-in-one system. Let’s see if all these features successfully pull together to make the Music Centre HD worthy of your attention.

The Elipson Music Centre HD sports a circular design, essentially looking like a glossy black plastic cake tin. That being said, it’s actually quite eye-catching and makes for a very attractive piece of equipment. Elipson makes the spherical Planet speakers, so the company has some form when it comes to round designs. 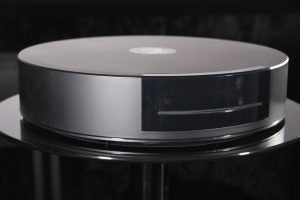 At the front is the loading slot for the CD drive, above which you’ll find the display (with a luminosity sensor). Beneath the slot are the touch-sensitive controls. At the rear are all the connections, along with some air vents for cooling. It’s a fairly minimalist design but I like it, and my only complaint would be that the glossy black finish is a real fingerprint magnet.

The Elipson Music Centre HD has a decent selection of connections at the rear, with two phono analogue audio inputs, a phono pre-out and a subwoofer out. There’s also an optical digital audio input, and an aerial connector for the built-in RDS FM and DAB/DAB+ tuner.

In addition, you’ll find binding posts for the amplification, and a two-pin connector for the power cord, along with an on/off switch. To the left as you face the rear of the unit is a USB port, a 3.5mm analogue audio input, and a 3.5mm headphone jack. 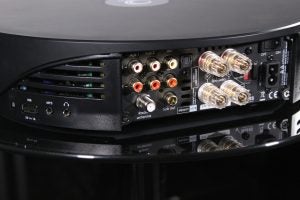 The Music Centre HD has built-in Bluetooth aptX, and the company also includes a Chromecast Audio dongle, which you can connect to the analogue audio 3.5mm input jack. It isn’t the most elegant solution, but it works.

In terms of controls, there are nine touch-sensitive buttons on the front of the Music Centre, just below the slot for the CD disc drive. These controls consist of power, source selection, volume up/down, play/pause, skip forward, skip back, stop, and eject. 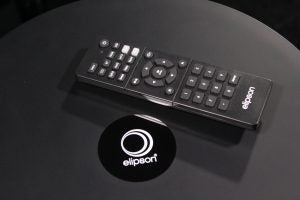 The Elipson Music Centre HD is essentially a two-channel audio system, with a built-in CD player, FM/DAB/DAB+ tuner, Bluetooth aptX, and various inputs. In addition, the CD player and USB port are both MP3/WMA-compliant, and the latter can also charge mobile devices or even the included Chromecast Audio dongle. The CD player uses a slot-style mechanism, but even for a player of this type, the Elipson can be quite noisy. 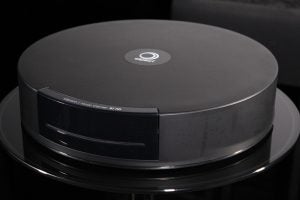 The system is powered by an ICEpower class D digital amplifier that can deliver 120W per channel into 4-ohms. That’s a sensible choice in the world of digital amplification, and the Elipson should have no problems driving a reasonable selection of speakers.

If you feel the system needs a little extra grunt, then the subwoofer output allows you to add an active subwoofer – and, unlike some rivals, the crossover point can be set on the Elipson rather than simply on the sub itself.

The Elipson Music Centre HD was connected to a pair of B&W 600 Series bookshelf speakers, and immediately impressed with excellent overall performance. There was more than enough power in the amplification to drive these speakers, and the Elipson even managed to retain a degree of headroom.

The CD player proved a very effective source, and if you still listen to shiny silver discs then it’s a great feature to have. Sound quality is excellent;  my only complaint would be about that noisy drive mechanism. However, it’s reasonably fast and responsive and my remastered copy of Pink Floyd’s “Wish You Were Here” sounded particularly good.

I was pleased to discover that the same album delivered via Chromecast sounded just as good. I could hear all the detail in Dave Gilmour’s delicate guitar work, and there was a pleasing balance to the harmonies and instrumentation. The Chromecast also allowed me to play high-res audio, and a 24-bit/96kHz download of “The Division Bell” by Pink Floyd sounded superb. 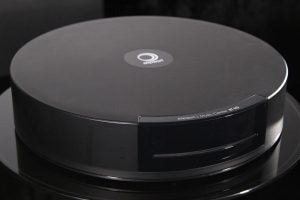 Despite its inherent limitations, Bluetooth was just as listenable and it was hard to find much difference when listening to “Wish You Were Here” from my iPhone X or Samsung Galaxy S9+. The optical input seemed a little lower in gain, but was still useful for connecting a TV – making the Music Centre a viable alternative to a soundbar. If you’ve joined the vinyl revival, then one of analogue inputs could be used for a turntable if you have a phono stage.

It’s nice to find an FM/DAB/DAB+ tuner on the Elipson as well, especially since most all-in-one systems tend to use internet radio these days. It was certainly well implemented, so it’s sure to please fans of radio. However, if your tastes run to streaming music services, then the Chromecast Audio dongle will ensure you never run out of songs to listen to.

The Elipson Music Centre HD is a very capable two-channel system, especially when paired with a good set of speakers. The inclusion of a CD player is something of a rarity these days, but it works well and is nice to have, even if it is a little noisy.

The Bluetooth performance is also good, and although the use of a Chromecast Audio dongle could be considered unsightly compared to a built-in solution, at least Elipson includes it for free. It certainly adds to the flexibility of the system, and does so at a competitive price.

The emphasis is very much on quality, from the design and connections, to the components and performance. This effective two-channel system can also be used with a turntable or a TV – and if you add an active subwoofer, you’ve got yourself a great little 2.1-channel setup.

The Elipson Music Centre HD is a well-made two-channel unit that includes impressive amplification, a CD player, Bluetooth support, and a built-in FM/DAB/DAB+ tuner. The inclusion of a Chromecast Audio dongle adds to its flexibility, and if paired with some decent speakers, you’ve got yourself an excellent all-in-one system.