What is the Elgato Game Capture HD60 Pro?

The Game Capture HD60 Pro is a high-end capture device for effortlessly recording and simultaneously streaming games from your PS4, Wii U, Xbox One or any other games console with HDMI output.

It distinguishes itself from the rest of Elgato’s range, and that of many other capture cards, thanks to its inclusion of a lag-free Instant Gameview. This means you can theoretically play the game through the capture software thanks to there being no lag – useful if you’ve only got one screen and want to monitor your capturing.

This is joined by 1080p 60Hz capture, continuous recording allowing you to pause and rewind as you play (flashback recording) and support for streaming via a range of services including Twitch and YouTube. 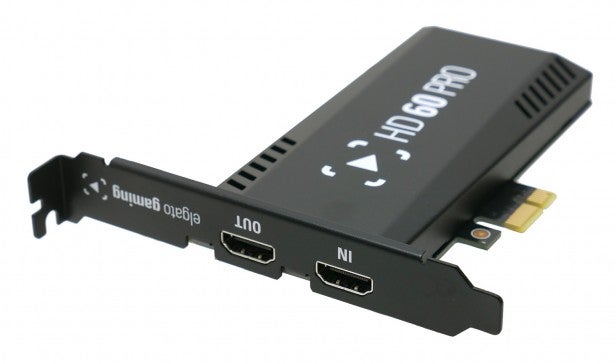 Unlike the rest of the Elgato game capture range and most other game captures devices, the HD60 Pro is an internal PCI-E card, rather than a USB device. This is what allows it to offer its Instant Gameview mode but it also makes it a far less versatile device.

While something like the Game Capture HD60 can be plugged into any old laptop and thus open the door to it being used anywhere round the house, or round someone else’s house, the HD 60 Pro is shut away inside your PC. While you certainly can still move your PC around, it’s a tad more difficult to do so.

The card itself is built on a black PCB with matching matt-black-painted metal IO plate and cover. It’s a picture of non-more-black gaming gear, aside from the HD60 Pro logo. Also included is a low profile IO plate so you can install this card in either full size or low-profile cases.

The card uses a PCI-E x1 slot so should work with any motherboard from the last several years, though users of mini-ITX PCs that include a graphics card will obviously have to look elsewhere as those motherboards only include one PCI-E slot.

On the IO side it simply has an HDMI input that will take the feed from your console or other input device and a second HDMI for plugging into your TV or monitor. 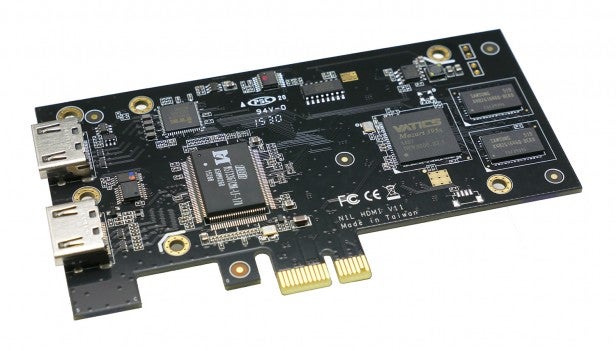 Assuming you’re familiar with installing any sort of PC expansion card, installation of the HD 60 Pro is a doddle. Just slot the card in, plug in your input and output feeds – one HDMI cable is provided in the box – and you’re ready to power your PC on.

Thankfully, unlike many USB devices, the card doesn’t require you to jump through hoops, making sure to install the drivers before plugging the device in. You can safely install the drivers, that you’ll have to download, after you’ve installed the card.

In fact there isn’t really a driver per se but just the Elgato Game Capture software, which wraps it all up in one. 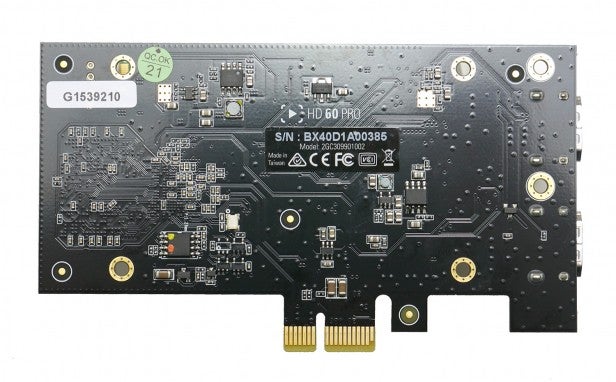 The Elgato Game Capture software is self-explanatory for the most part. In the top left is the video feed that will show the live feed coming in from your console. Depending on whether you’ve chosen Instant Gameview or the constant-record option this will either be an instant feed or slightly delayed as the software records the scene before showing it.

Under this are the recording controls, with clear buttons for starting recording or rewinding and pausing the live feed alongside a screenshot button, elapsed time and storage readouts, and a streaming on/off button. 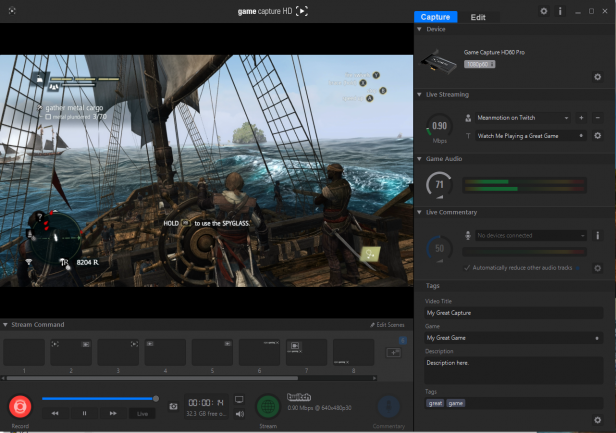 It’s down the right hand side that all the various settings can be found. You can tweak capture settings, setup live streaming for the various services offered, adjust game audio levels, setup a live commentary and tag your recording.

It’s a touch frustrating that you have to jump into the somewhat hidden away main settings menu to change things like the recording storage location and whether to use Flashback recording. There’s also a fairly limited set of recording options, though in many ways this is actually in the HD60 Pro’s favour as it keeps things simple – it records in 1080p at 60Hz and all you need to worry about is what quality level you want to choose. 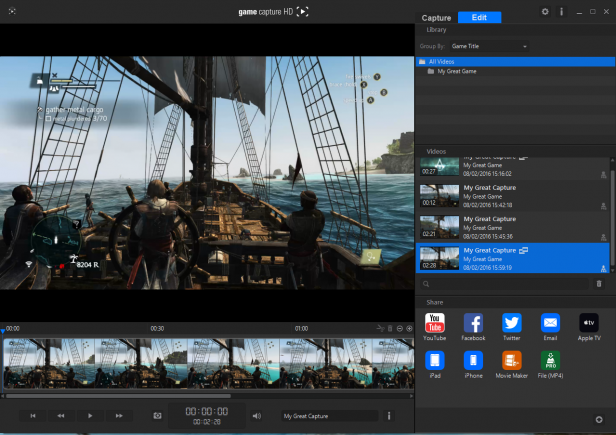 Also included in the software is a basic set of editing controls. It presents a list of your recordings which you can then slice up into sections, allowing you to edit them by means of cutting out the bits you don’t want.

However there’s no way to join clips together or swap sections of a clip around. In a reverse of the old baking mantra, you can take away but you can’t add.

Once you’ve trimmed your clip to your liking there are sharing controls for easily uploading your clip to the likes of YouTube, Facebook and Twitter. It also has options for outputting the video to a format compatible with iPads, iPhones and Apple TVs, or just to another file.

Overall it’s a mostly a well thought out bit of software that makes it easy to just get on with the task of recording, streaming, editing and sharing your gaming exploits without much of the usual hassle associated with editing and recording video. 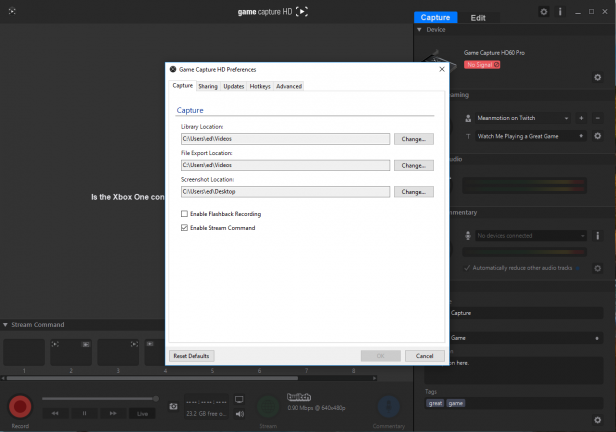 Largely my experience with the HD60 Pro was flawless, with it simply working straight away, having no problem recording and streaming and the software remained reasonably responsive throughout.

The only slip-up was that, at first, I couldn’t get Flashback recording to work properly with the software only ever recording short, stuttering clips. However, after switching it off and on again it worked flawlessly.

Comparing the two capture modes – Flashback and Instant Gameview – the difference is quite clear between the slightly laggy experience of the former and the instant feel of the latter. With Instant Gameview you really can game through the software, though with no fullscreen option it wouldn’t be the most immersive experience. Great for monitoring what’s going on though. 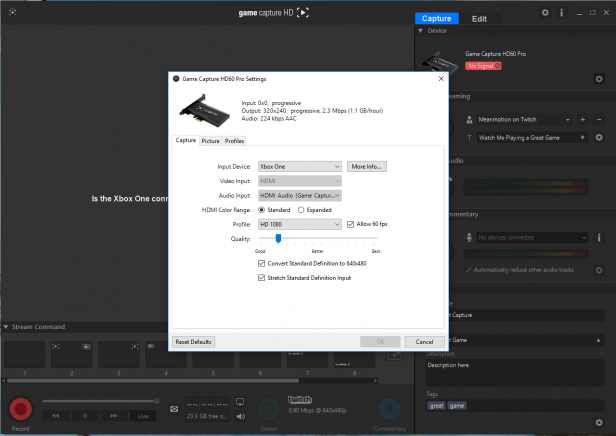 As for the quality of captured footage, I found it to be very good. In the lowest quality setting there’s a clear blurriness and loss of detail that definitely detracts from the watchability, particularly when there’s a lot of movement on screen. Certainly it would not be ideal for further editing.

However, in the top quality setting the image is almost completely free of compression artefacts, with every ounce of detail retained. Of course you do pay for the detail in terms of storage. A 30-second clip at the lowest setting uses around 50MB, whereas the top detail setting uses 200MB. 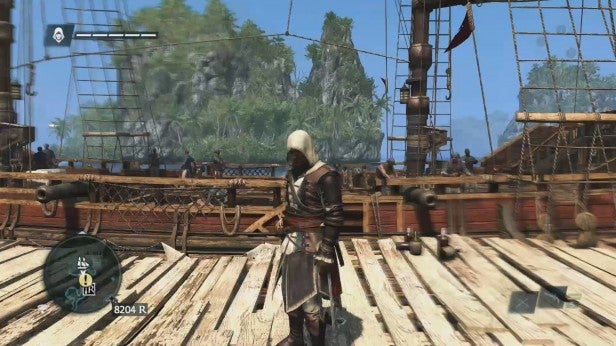 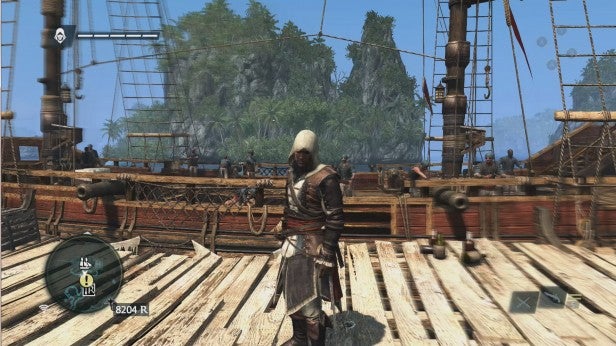 As for streaming, my experience using Twitch was flawless – forgetting my Twitch password aside – and it’s a breeze to start and stop streams once set up.

A key advantage of these captures devices is that as well as providing a means to suck in that video feed from your console, they also provide hardware video encoding, taking a huge amount of strain off your CPU. Sure enough, when just recording the Elgato only bumped CPU usage up to around 15%.

In fact streaming was the more CPU-taxing of the two tasks, using up 27% CPU. Meanwhile both together hit around 30%, which still leaves plenty of processing power to get on with other stuff at the same time. 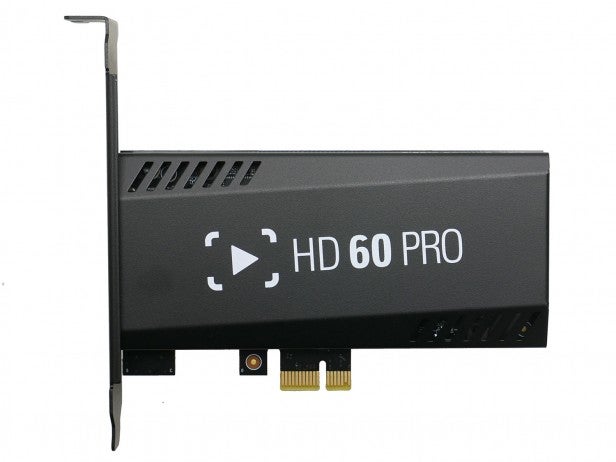 Should I buy the Elgato Game Capture HD60 Pro?

This is a niche product. With the latest consoles including means to record and share short video clips this sort of device is really for those dedicated to recording and streaming large gaming sessions.

That’s true of any capture device but it applies double to this PC-bound card, which isn’t as portable or versatile as a USB-based unit. Triple when you also consider its standout feature is even more niche – how imperative is it that you can see a completely lag-free version of your game from the recording software?

Also, it’s worth noting that you can use this device to capture any video content, just so long as it’s not copy protected. So there are potentially some other professional uses there.

Nonetheless, considering it’s priced at a whopping £159.95, this is only for a select few.

But for those whom this device fits the bill, it delivers with aplomb when it comes to ease of use and performance. Recording and streaming is near effortless and quality from both is excellent.

If you’re serious about capturing your console gaming sessions then the Elgato Capture HD 60 Pro is an excellent choice. It records and streams to a high quality and its unique instant gameview feature is useful if a lag-free feed is important to you. For many users, though, a cheaper USB-based capture device will suffice.