What is the Elgato Game Capture HD 60?

The latest games consoles
offer the ability to record and share clips of your gaming glories, but
they only offer limited control and the maximum time you can record is
quite short. If you want to record hours and hours of footage and do
more with your recordings afterwards you’ll need something like the
Elgato Game Capture HD 60.

This latest version adds in support
for 60 frames per second recording so you can get the smoothest possible
recordings of your escapades. It also supports streaming with live commentary with support for Twitch and YouTube. 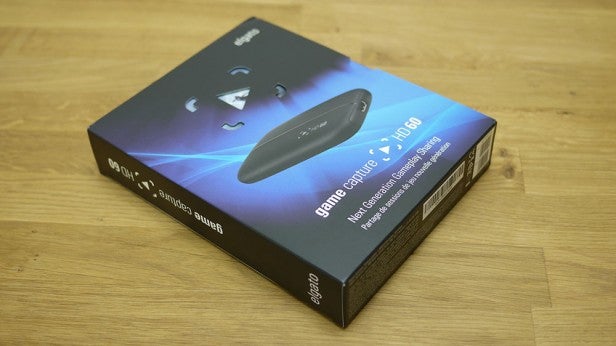 Like
most such capture devices, the Game Capture HD 60 is a pretty simple
affair. It has an HDMI input into which you plug your console (or the
video output from any other HDMI-equipped device) an HDMI output into
which you plug your TV (so you can still play the game) and a USB socket
for sucking out the video stream and storing it on a computer.

The
device itself is one of the smallest we’ve yet seen at 110 x 74 x 18mm –
a smaller footprint than a smartphone, though a little thicker. There
is a reason for this, though, as there are very few extra features here.
Whereas the likes of the Roxio GameCap HD Pro and Elgato’s own previous Game Capture HD offer analogue audio and
video inputs and outputs (for use with older consoles) here the only
other connection is a stereo jack socket for recording video
commentaries – just plug your microphone straight into it. 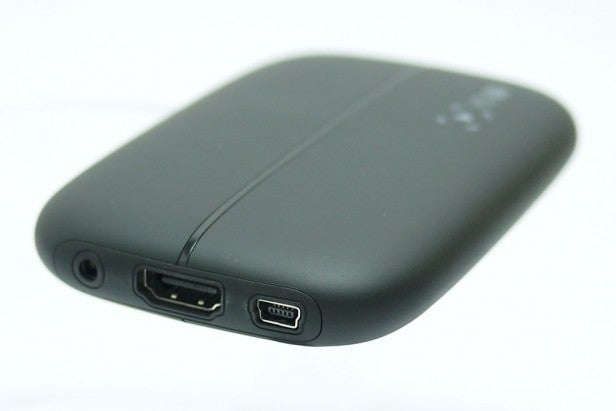 The
small size also means that the device won’t sit firm on a TV cabinet as
the tension in most HDMI cable will push it around. A minor point, but
worth noting.

Another little thing that caught our eye is that
the USB socket is miniUSB, when we tend to like to see microUSB these
days just because most mobile devices use microUSB, but it’s a minor
point.

Otherwise the HD 60 is as elegant and compact as you
could hope for such a device to be. It’s finished in a soft-touch
plastic that is bisected by a shiny strip. From here a row of LEDs shine
through to indicate the device is powered on and recording.

In
the box you get a nice long (2m) USB cable and a much shorter (80cm)
HDMI cable. The short HDMi makes sense as the device should only be
sitting between what should have been a long enough HDMI cable to
reach from your console to the TV anyway. There’s no audio cable for
your microphone, but this seems like a reasonable omission given it’s far
less likely to be used.

Setting up the Game Capture HD 60 is very simple. First thing to do is download and install the software from the Elgato website, then you just hook it up between you console and TV, connect your microphone and plug in the USB cable. 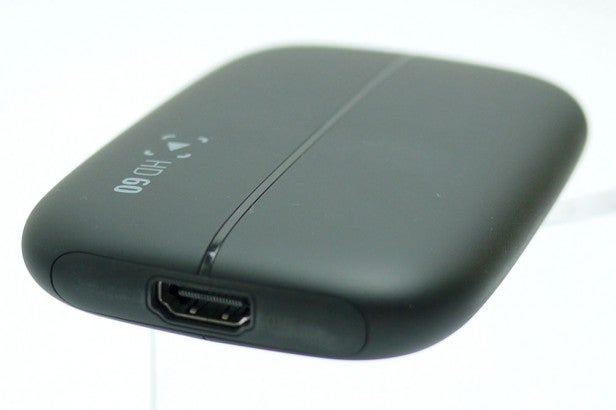 The software provided with the Game Capture HD 60 is generally easy to use and tidily laid out.

In
the top left is the live stream of what’s running through the HD 60,
with it generally running a few seconds behind the live feed you’ll see
on your TV. Below this are the main recording controls, a hard drive
space indicator and buttons for starting the streaming service and
turning on commentary.

To the right are the various live options
where you can adjust game and commentary audio levels, tweak live
streaming bit rate and change tags. The main settings are in the
preferences menu accessed via the little gear button in the top right.
Here you can set where you’d like the recorded files to be stored,
adjust recording format options, enable streaming, set sharing options
and more. 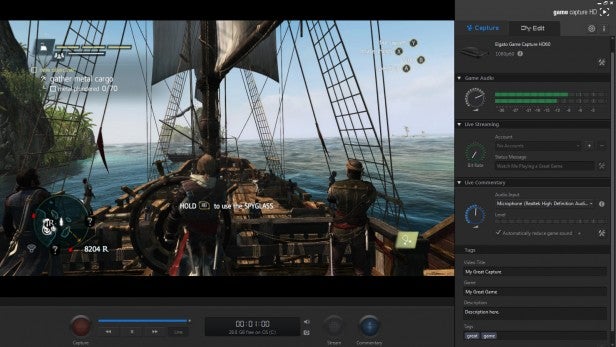 As
well as recording, the software can also be used to do some rudimentary
editing. The interface offers the ability to chop the recording up,
removing and rearranging sections, start a new video from the chopped
selection, pick out screenshots and choose the audio tracks you’d like
to keep.

It’s a decent
little selection for making some basic edits, though the lack of manual
control over output options may be a concern for more advanced users.

Both PCs and Macs are supported by Elgato’s official software, but there’s no word on Linux support.

The
overall experience of using the Game Capture HD 60 is very easy. It all
just works once plugged in correctly and the software is loaded up.

We
were scratching our heads for a while until we realised that there was
nothing showing on the screen because the Xbox One we were testing with
was showing TV so was enabling HDCP. HDCP or High-Definition Content
Protection is the protection used by things like Blu-ray discs to stop
people being able to just record the video being played over HDMI. For
consoles like the Xbox One, HDCP is enabled whenever protected content
is being played, making the screen go blank when the Elgato software is
enabled. HDCP is not used when playing games or just navigating the
interface. 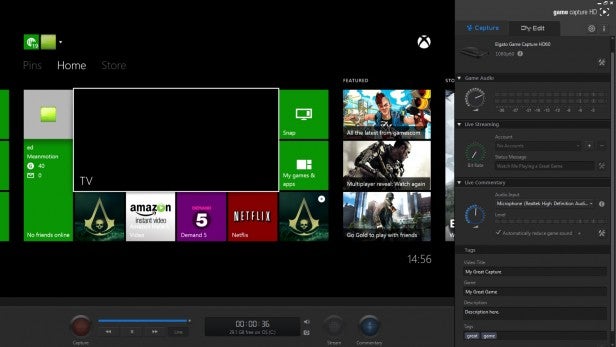 When HDCP protected content is being shown the screen goes blank

The
other thing to watch out for is the speed of the machine you’re using
to capture the video. We were using an Ultrabook laptop that struggled a
little to keep up with the constant stream of video being thrown at it.

In terms of files size, you can alter the output size and
compression level but the default settings of 60fps, 1080p and mid-way
along the compression level setting resulted in a 3:28 long file being
485MB.

Streaming is as easy to setup as recording. Depending on
which service you’re using there can be a few hoops to jump through,
providing permissions and such like, but it’s a process that takes a
matter of seconds. Once setup, just select the service you’d like to
use, the streaming bit rate (which determines the resolution) and click
the streaming button.

When streaming you can continue to record but only at 720p, which is also the maximum resolution of the stream.

A quick demonstration of footage captured using the Elgato Game Capture HD 60 on an Xbox One.

Overall
image quality is excellent. The detail levels you’d hope for from a
1080p capture are clearly visible. There is a very slight haziness to
the overall image and occasionally colour can look a little blocky
compared to the original image, both symptoms of the video compression
algorithm, but both are negligible and the footage is easily up to
broadcast quality.

The advantage of 60fps capture is also clearly
visible with markedly smoother looking footage during normal playback (note that the 60fps advantage won’t be visible in the above video as YouTube doesn’t yet support this).
There’s also greater scope for picking out slow-motion sections and more
finely chopping up the footage for analysis. 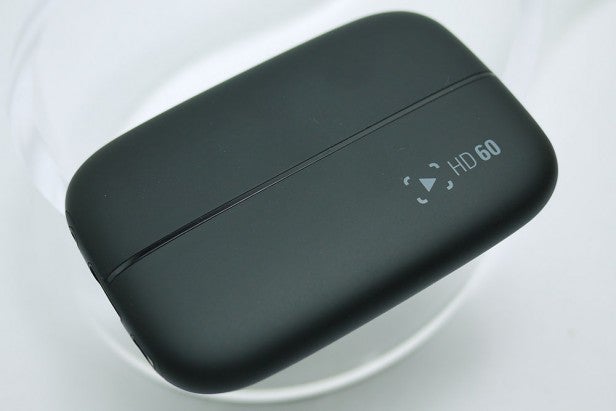 Should I Buy the Elgato Gam Capture HD 60?

With
an MSRP of £139.95, the Elgato Game Capture HD 60 is a
significant investment just to get a bit more control over game footage
capture, and for those that simply want to share their latest ‘frags’
with friends it’s probably overkill.

Even if you’re remotely
serious about your video game capture and need the extra versatility
that a dedicated capture device can provide, 30fps capable models are
less than half the price, so again it’s worth considering how likely it
is you’ll need the higher framerate.

If you do need the full
feature set that the Game Capture HD 60 provides, though, then its price
is about on the money with 60fps capable competitors coming in around
the same price. That said, the AverMedia ExtremeCap U3 does offer
uncompressed capture and component inputs for around the same money,
though we’re yet to test that model.

A capable game capture device that’s overkill for casual users, but a very good option for anyone who wants the best quality stream possible.