What is the Elephone W2?

The W2 is an analogue watch with smartphone functionality from low-cost Chinese phone-maker Elephone. It lacks an LCD screen but can track elements such as steps taken and sleeping patterns, and can also be used to notify you of incoming calls and alarms.

It uses a traditional CR2032 3V watch battery that, according to the manufacturer, lasts for around three months. The W2 is waterproof up to 30 metres and has its own companion app.

The W2 isn’t like other smartwatches – this becomes apparent the moment you open up the large box in which it ships. For starters, you have to assemble the watch yourself, connecting the strap using the industry-standard 22mm connector.

You’ll also notice two additional batteries and a small screwdriver – the latter to remove the rear on the watch to insert the former. The W2 lacks a power-guzzling LCD screen, and therefore runs off CR2032 batteries that Elephone claims deliver three months of Bluetooth-linked stamina before they need to be replaced.

The circular, stainless-steel design calls to mind the Moto 360, and the build quality is just as good, if not better, than Motorola’s famous Android Wear watch.

The unit is surprisingly weighty and feels well made. On the right-hand side of the watch you’ll find two buttons and a dial for adjusting the glow-in-the-dark analogue hands. That’s right, the W2 isn’t like other smartwatches in that it doesn’t have a digital display – it has an analogue movement just like a “traditional” timepiece.

This enables the W2 to operate independently of your phone, and if used in this manner, the battery will apparently last up to three years.

On the face of the watch are various LED lights, which are used to communicate information such as connection status and how much activity you’ve done. The watch has two modes – sleep and exercise – and, annoyingly, you have to toggle between them by holding down the lower button on the side.

When you’re out and about, the lower bank of 10 LEDs on the face of the watch light up to display how close you are to achieving your daily goal. Each LED represents 10% of your daily goal.

The back of the unit has four screws that need to be removed to change the battery. Since the W2 is billed as offering water-resistance up to 30 metres, it’s vital that you refit the back panel tightly. There were a times I felt concerned that I hadn’t fixed it properly and had to double-check. 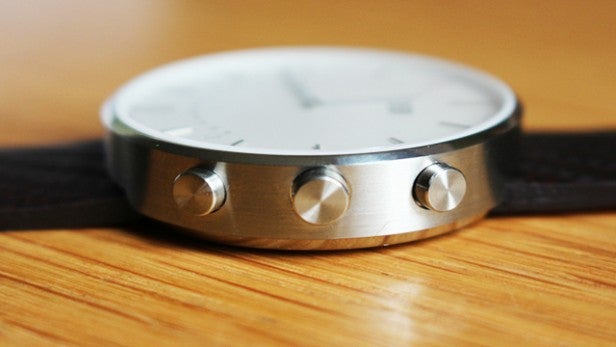 The strap is advertised as being genuine Italian leather and is nice enough, but because of that aforementioned 22mm connection, you can swap it out with a strap of your choosing if you so wish. Personally, I didn’t mind the pattern on the leather, but a few others noted that it looked a little cheap.

Linking the W2 to your phone via Bluetooth is easy enough, but to get full functionality you have to install the companion application. It’s on the Google Play Store, but the advertised iOS version doesn’t seem to be available as yet. This app shows you how many steps you’ve taken and how many calories you’re estimated to have burnt off as a result.

Here you can set your daily target, and as you inch closer to this goal you’ll see the LED lights spring to life. It’s a neat way of displaying your progress, but to view detailed information you’ll need to consult the app.

Another screen shows your sleeping data, with the watch monitoring your movement as you slumber to give you a picture of how deeply you sleep. It’s possible to see all of the data captured by the W2 displayed on a graph, which gives you a good idea of your exercise and dozing habits.

Elsewhere in the app, you can enable a sedentary alert that makes the W2 vibrate when you’ve been sat in the same position for a certain period of time, encouraging you to get up and walk about. 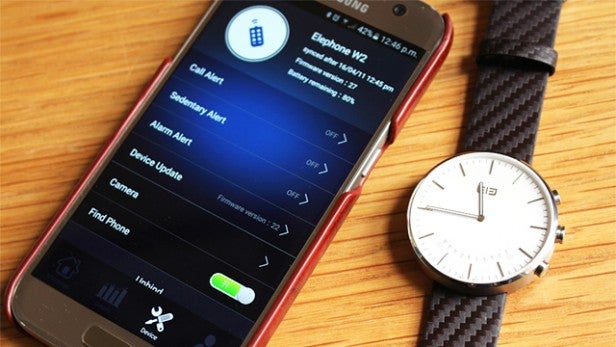 You can also make the watch rumble as an alarm. A “find phone” setting is present too: double-press the bottom button and it will cause your phone to ring, assuming it’s within Bluetooth range, of course.

Finally, you can use the watch as a remote shutter for your phone’s camera, but you have to use the built-in camera app in the W2 application, which for some reason distorts the image. It could be useful in some situations – taking candid selfies, perhaps – but it’s hardly what I’d consider a key selling point.

Unlike other smartwatches, the W2 doesn’t have an internal rechargeable battery. Instead, it uses CR2032 cells, of the type you’ll find in some standard wristwatches. These provide about three months of stamina with the Bluetooth connection enabled. The W3 is capable of offering this kind of battery life because it doesn’t have a screen to power.

If you don’t like the idea of having to charge your watch every night to ensure it doesn’t die on you the following day then this arrangement could be quite agreeable.

In addition, CR2032 batteries are incredibly cheap and easy to source – many corner shops and post offices sell them – and because you get two spares with the phone, you’re basically good for nine months of use before you have to even consider restocking.

The uppermost LED on the face of the watch flashes red when the battery needs replacing, but you can check the remaining stamina at any time via the W2 application. 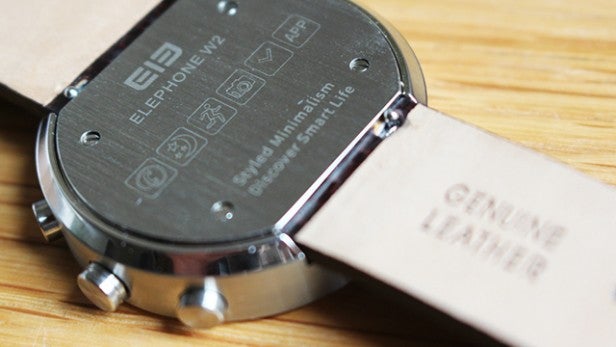 Should I buy the Elephone W2?

Not everyone wants a smartwatch that totally replicates the functionality of their phone, and while the lack of an LCD screen on the W2 might initially seem like a drawback, it allows the device to offer impressive battery life and a strong focus on fitness tracking. It also means that it looks like a proper analogue wristwatch – a bonus for those who find traditional smartwatches a bit too full-on for their tastes.

However, by removing the LCD screen Elephone has taken away many of the features on which smartwatches are sold, such as the ability to quickly view alerts and notifications without having to take out your phone from your pocket.

Also, as a fitness aid its usefulness could be questioned; if you have your phone on you at all times, the W2 is basically replicating the fitness tracking in Google’s Fit app or Apple’s HealthKit. It’s only going to be genuinely worthwhile if you leave your phone at home when you’re out jogging, as it can sync up the data with the W2 app when you return from your exercise.

After wearing the W2 for a few weeks, I almost forgot it was a smartwatch. I’m not obsessive about monitoring my fitness so perhaps that aspect of the device’s functionality was lost on me, but the only other feature I found truly interesting was the sedentary alert, which gave me the kick I needed to make sure I walked around a bit during the working day.

The notification alert is largely redundant, since I know when my phone is ringing as it either makes a noise or vibrates – I really don’t need something on my wrist to tell me that, especially not a device that lacks the means to actually show me who is ringing, texting or emailing me. As such, the W2 is hard to recommend. It isn’t slim or sturdy enough to be a true fitness device, and it lacks the LCD screen required for checking up on alerts.

At around £45 it isn’t expensive when compared to other smartwatches, and the fact that it supports both Android and iOS is a nice touch. However, I think the ideal buyer for the W2 is someone who wants a watch more than they want a smartwatch – which rather defeats the object when you consider that there are plenty of “normal” watches out there for around the same price, or less.

Cheap, well made but not all that useful – the Elephone W2 is a smartwatch that struggles to justify its existence.