We all love Wii; it’s impossible not to. It’s the console that has put simple, stupid fun back on the map. It has given us a much needed rest from endless tales of chunky marines wielding chunkier weapons against alien scum in gloomy, alien locations, and brought back the idea of sitting around the telly playing games that your sister, your dad – heck, your grandma – could enjoy. But much as we love it, we can’t help but feel that a subtle scent of disappointment is beginning to cloud the air. 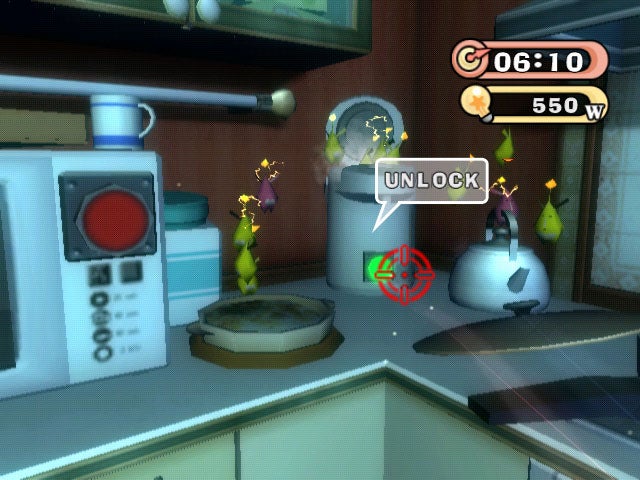 You see, after all the promise of revolutionary controls and thrilling, physically interactive game experiences, the reality comes down to this: we can basically cram all Wii games released so far into three basic categories. First, we have the genuine disasters; the useless cross-platform ports with Wii controls shoe-horned in and the ropey original concepts made worse by a rotten control scheme. Secondly, we have the novelty efforts. These games make excellent use of the Wii remote (and nunchuck where appropriate) and get the whole household excited for a day or two, but all too soon it becomes apparent that these games simply don’t have any staying power. Once the novelty factor wears off, the game goes back to its box and the Wii goes back on the shelf. Only a few games make the last category – the game that successfully marries the innovations of the Wii platform to a deep or at least hugely addictive game experience. At the moment, you can count these titles on one hand (or if you’re so grumpy that you only count Legend of Zelda: Twilight Princess, one finger).


This needs to change if the Wii is to go beyond being a short-term success, but at the moment the initial flood of Wii titles has pretty much slowed down to a trickle. This puts Eledees, once known as Elebits, in an interesting position. On first impression, it’s a game that belongs firmly in category two, but give it time and it slowly dawns on you that it’s actually pushing for a place in category three. 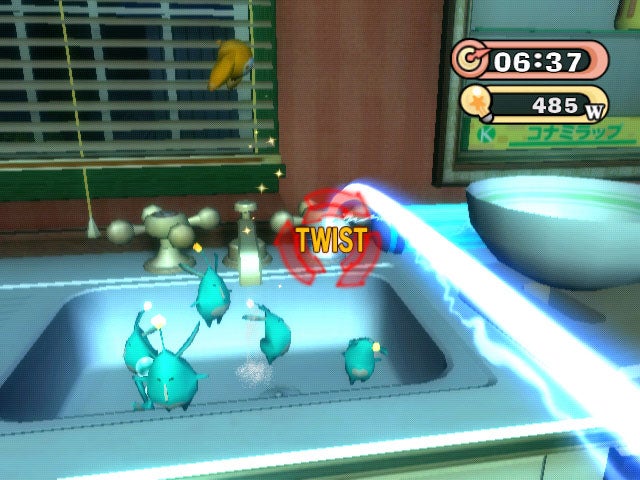 Here’s how it works: in the Eledees world, electricity doesn’t work according to our laws of physics, but instead is dictated by the existence of a horde of cute little electrical sprites – the titular Eledees. You’re the child of two scientists who study Eledees for a living. One night there’s a mysterious blackout emergency affecting your small town, and your parents run off to investigate, leaving you alone in a dark house with nothing but your father’s capture gun for company. Keen to get things going again, you go out on the search for the little Eledees. You’ll find them loitering in cupboards, hiding under household objects and generally skittering around on shelves. By pointing the capture gun at small objects and firing, you release an energy stream that can move these objects around. By moving objects around, you uncover Eledees. Shoot them with the capture gun, and it charges up with electrical energy. You can then use this energy to power certain household items, and these release special Eledees that, when you capture them, ‘power-up’ your capture gun so that it can lift heavier items and – hey presto – uncover more Eledees. To make things even trickier, some of these items require a little extra manipulation, like finding bread to put in the toaster or popcorn to put in the microwave, or using the remote as a virtual key to set the clockwork motion of a Cuckoo Clock in action.

The game controls like a first person shooter, with the nunchuck controlling movement and the remote like a combination of mouse and light-gun, both changing your viewpoint and enabling you to shoot any Eledees on the screen. However, while you could call it a kiddie-friendly FPS, it’s probably more accurate to describe it as a weird hybrid of Half-Life 2 and Katamari Damacy. The capture gun acts a lot like the gravity gun in the former, but in terms of look, feel and general appeal, Eledees sits a lot closer to the latter. 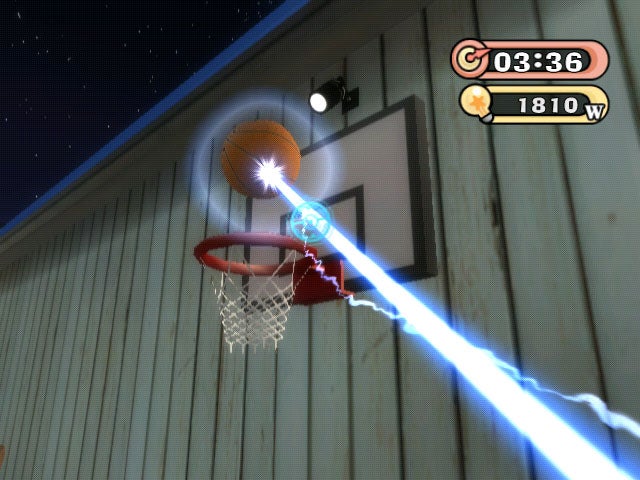 That’s because, when it comes down to it, both games are obsessed with the idea of tossing away the rulebook and causing chaos in the everyday adult world. Both games have a deliberately childlike visual style, and while Eledees isn’t quite as weird as Katamari Damacy in this respect, it still goes in for flat colours, simple textures and sweet but basic-looking models, prizing the scale and number of objects in the scene over realistic textures or detail levels. Both games also choose very ordinary, primarily suburban environments for their action, starting off inside the house and steadily scaling upwards and outwards (though Eledees doesn’t take this to the extremes that Katamari Damacy does). One minute you’re in the bedroom, then you’re in the kitchen, and suddenly you’re out on the streets. Why this might be cool will hopefully become clear later on.


What’s more, both games make the main threat to your progress a challenging time limit. Eledees does throw in hostile Eledees at later stages, and should you zap more than five of these you will have to repeat the level. It also incorporates breakable items and noise levels in some missions, failing you should you bust too many of the former or make too much of a racket in the latter. However, in most cases your main worry is simply to grab the required number of Eledees in the available time, much as was the case with Katamari Damacy, where your aim was to build a Katamari of a certain size. 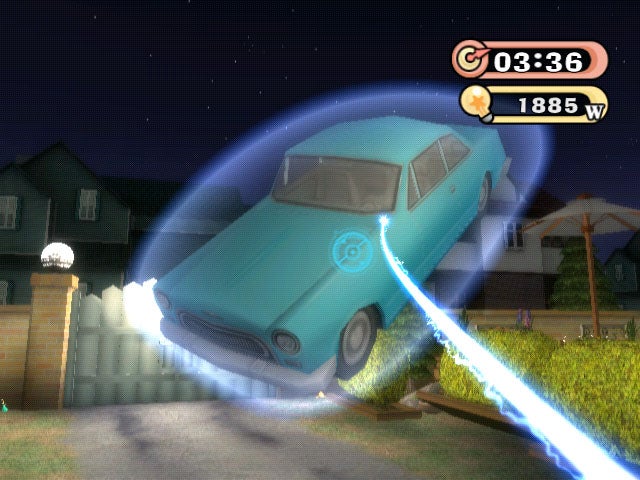 But it’s in the mayhem bit that the true appeal of both games really lies. Discovering and capturing Eledees is fun, but the biggest pleasure in Eledees is simply causing a huge, stinking mess. Go on. Get in the lounge, start tossing speakers about. Grab that big plasma screen off the wall and throw it over the other side of the room. Sweep all that stuff off the shelves to uncover the Eledees cowering underneath. It’s stupid, it’s childish, but by golly, it’s fun. As the environments get bigger, the stuff you can chuck around gets bigger too. By the time you’re out on the town streets, hot-dog stands, telephone boxes and even cars are all grist to your capture gun’s mill.

The surprising thing is that there’s more strategy here than you might expect. While you’re always working on your skills with the capture gun, you’re also having to think: what is the optimal path through the level? Is it worth going back to the kitchen, picking up the roast and putting it in the oven in order to get the bonus Eledees and level up my gun, or would my time be better served just finding and shooting all the Eledees? This, combined with mindless destruction and the general cuteness of the game makes for a surprisingly compelling bit of entertainment. 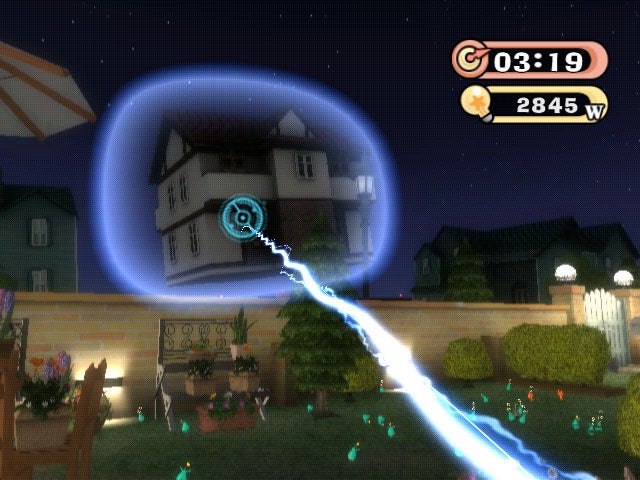 Admittedly, it does start getting repetitive, particularly in the early stages where you seem to be revisiting the same levels over and over again, and slightly annoying boss levels, which take the game down a more traditional shoot-em-up detour, don’t really help. However, about halfway through Eledees throws in a clutch of fantastic levels where gravity itself has been switched off, and suddenly you have a whole new set of challenges to contend with.


Is all this enough to propel Eledees into our elusive third category of Wii games? Well, it certainly gets close. The fundamental concept is surprisingly strong, the gameplay is addictive, and there are more levels to get through than you might expect. It does have possibly the worst cut-scenes of recent years, with some truly unbearable voice work, but generally speaking the visuals are fine and the music and audio effects strong. Some operations are a little tricky with the Wii remote – putting toast in the toaster is a particular bugbear – but there’s nothing that really breaks the game for long. And Eledees even throws in a primitive level-creation tool, so if you want to create environments full of your favourite toss-able objects, you can. 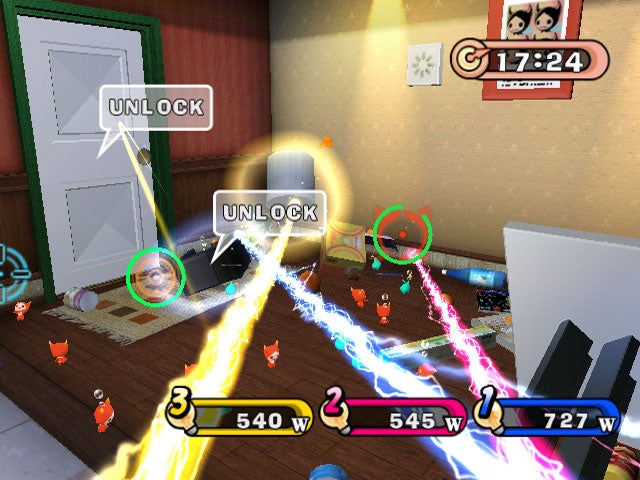 However, there is still a lingering feeling that Konami could have run further with the ideas here, and that the gameplay lacks the subtlety, the variety and – most of all – that all important WOW factor that could have transformed it from an entertaining excuse to get your Wii back in action into a game that might absorb you for weeks on end. Eledees develops from its simple beginnings, but only in fits and starts, and I doubt most players will be bothered to revisit the same levels over and again to improve their score. I suspect that kids may get a lot more mileage from it, but most adult gamers will have exhausted their initial enthusiasm within a week or two. That’s still a huge improvement on the vast majority of Wii games, where the realistic lifespan can be measured in days or even hours, but to make a must-have game? I don’t think so. Still, as far as near misses go this is probably the most delightful one this year.


Eledees has more depth than you might expect, but it’s no Katamari-style cult classic. It is a lot of fun, but it’s not quite built to last.