With its smart app the Elechomes Smart WiFi Air Purifier A3B is far cheaper than other app-controlled air purifiers, but a few rough edges show this, and the system is fiddly to get connected to Wi-Fi and the app needs a bit of work. There's a dust sensor on board, which will ramp up the purifier automatically, but it won't respond to VOCs or other gasses in the air. With relatively fast air purification, there's still enough to recommend this product, particularly in homes where the main issue is dust and pollen.

Most smart air purifiers tend to be quite expensive, but the Elechomes Smart WiFi Air Purifier A3B is bucking the trend. Considerably cheaper than the competition, this model has app control and an automatic sensor to detect when the air is dirty.

Very quiet operation and slim design are nice to see, but the app has a horrible interface and the system is tricky to get online.

Design and features – App control is nice to see, just a shame about the app

Designed for rooms of up to 30m2, the Elechomes Smart WiFi Air Purifier A3B is suitable for most averaged size rooms in the UK. Although it’s rather basic and plain looking, the slim air filter (510 x 325 x 172mm, 5kg) is easy enough to tuck away at the side of the room.

There’s a flap at the front that houses the air filter, with air being drawn in through this and then blown out of the top. The advantage of this design is that you can put the air filter right up against a wall without affecting performance and, even on maximum fan speed, you shouldn’t feel a cold draft from it.

When you first set the filter up, you have to remove the filter from its plastic bag and then push it into place. It’s an easy job to do, and shows how easy it would be to replace the filter once used. Each filter has flour-stages, with a pre-filter for larger particles, an antibacterial cloth, an activated carbon filter for odours, and a HEPA filter for the smallest pollutants. According to the company, this system captures 99.97% of common airborne pollutants. 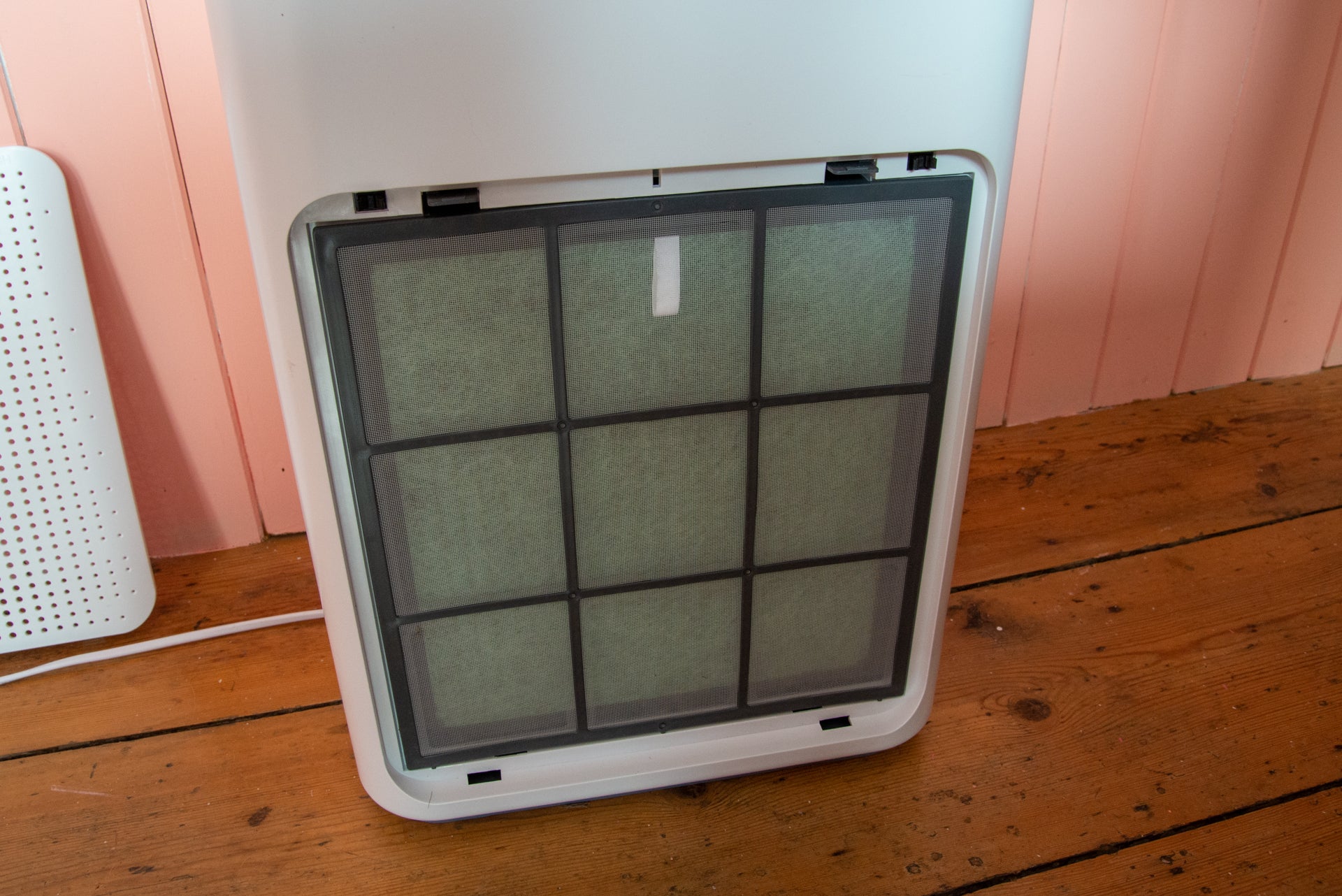 The pre-filter can be vacuumed to keep it clean, but the remaining filter is one unit that needs replacing. Replacement filters cost £26, and should be replaced around every six months, although the air purifier will warn you when they’ve been in operation for 1500 hours by flashing an indicator on the main control panel. Confusingly, this icon is labelled as Wi-Fi. 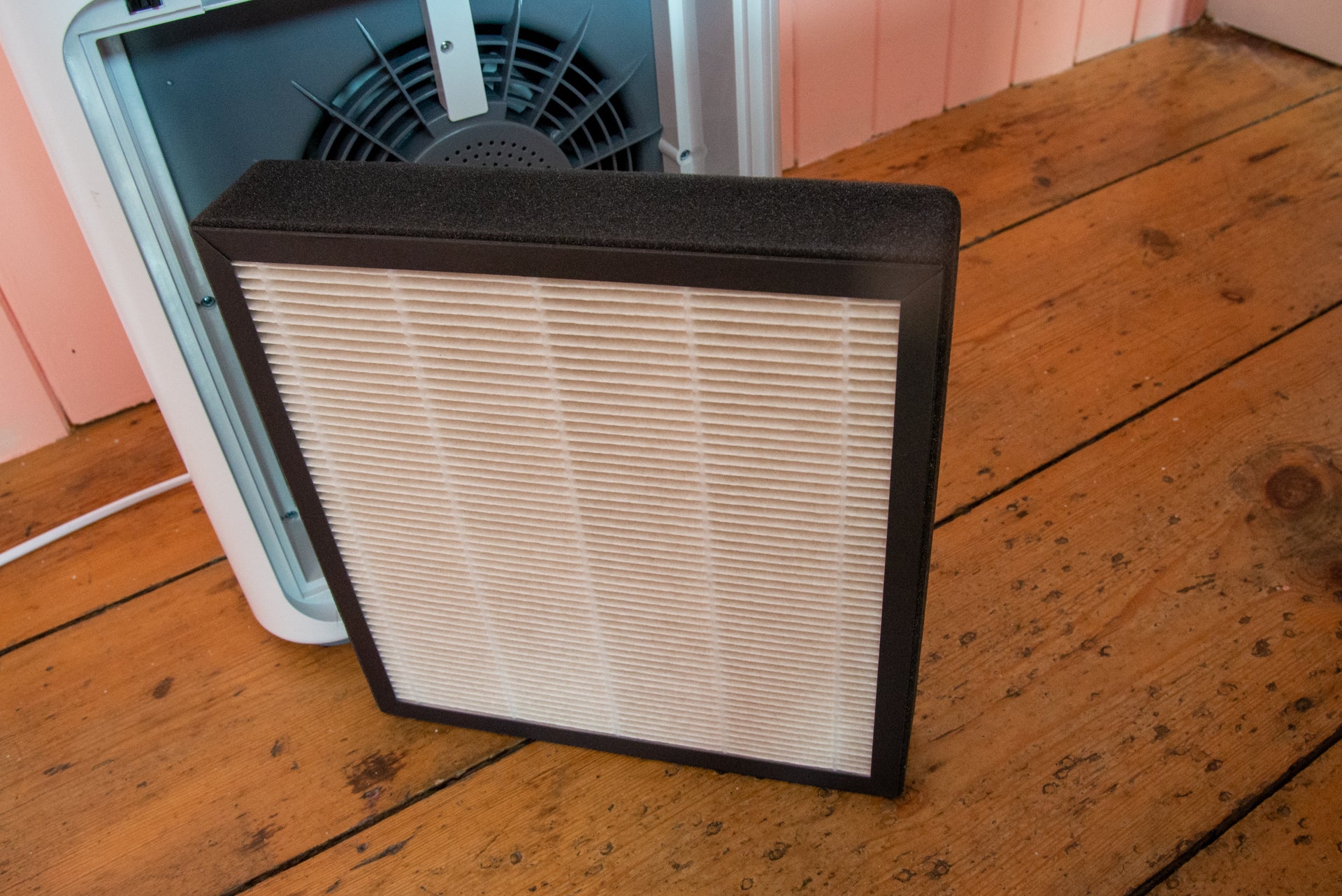 The main control panel lets you select the various modes. There’s a display that shows you the current PM2.5 (very small particles) count, which is used to control the auto mode, where the fan speed is adjusted to deal with the threat. A dust sensor is used to measure the PM2.5 count, which isn’t as effective as multiple sensors, such as on Dyson purifying fans, which can measure NO2 and VOC gasses. 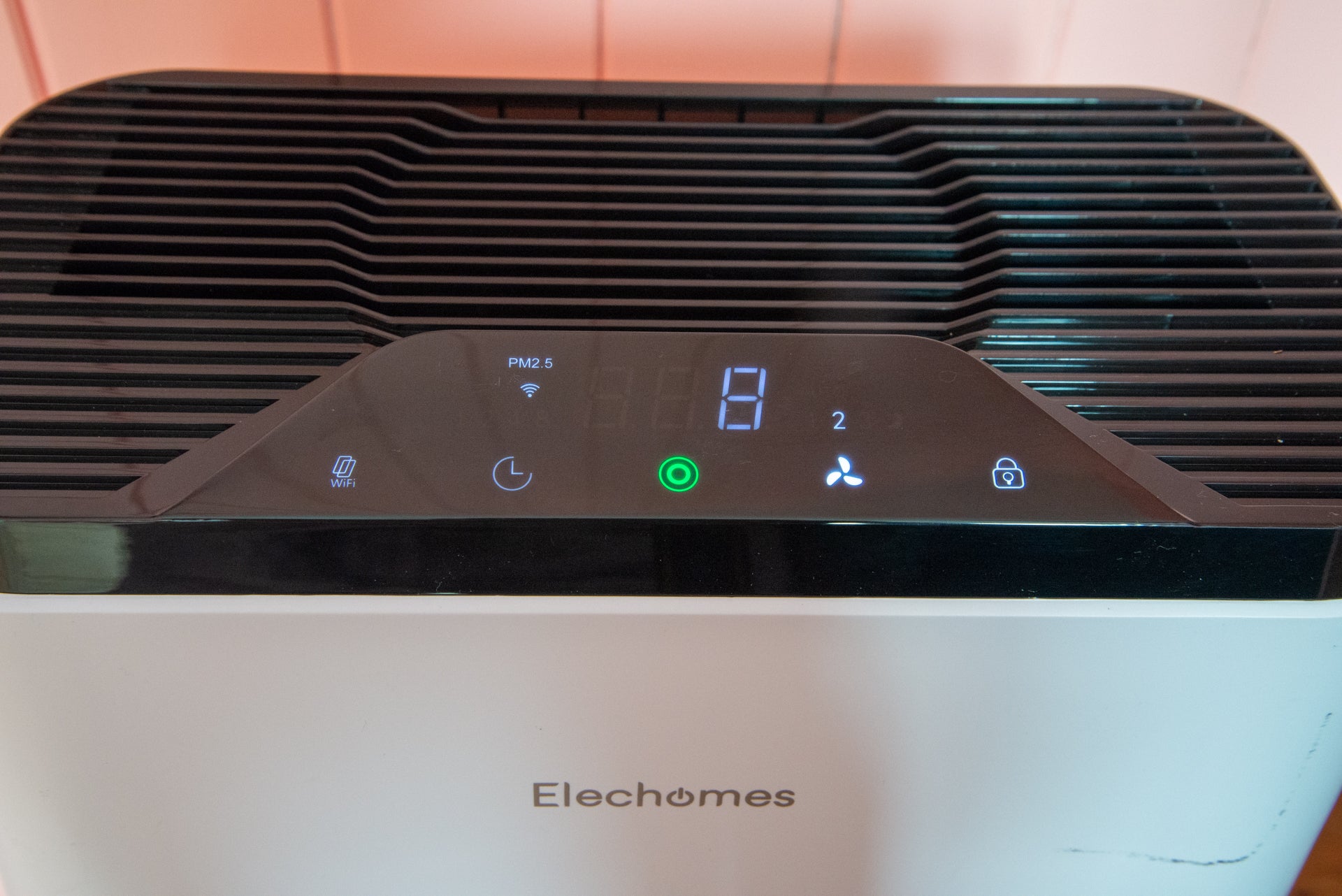 As a result, while Dyson’s purifier will ramp up and down during the day, responding to more environmental issues, the Elechomes Smart WiFi Air Purifier A3B doesn’t change fan speed that often, and only responds to dust and other small particles in the air.

As a result, unpacking a different product for review caused some off-gassing (VOC release), which had my Dyson purifier jumping into action, while the Elechomes A3B did nothing. Still, some kind of sensor is better than nothing.

If you don’t want auto mode, there are three manual fan speeds to choose from, plus a night mode, which turns off the lights on the control panel and limits fan speed. You can also set a timer, choosing 1, 2, 4 or 8-hours.

If you want to connect the A3B to Wi-Fi, then you need to get the Smart Life app, which can connect to all of Elechomes’ products. Make sure that you select the right air purifier from the list, or you’ll have problems.

It’s slightly frustrating getting the system working, too. The manual says to press and hold the Wi-Fi button, which is actually the indicator for the filter replacement. And, if you do this while the machine is turned on, you just reset the filter count. Instead, you have to put the A3B into standby mode and then press and hold the button down until the actual Wi-Fi symbol lights up. That’s fine, but without power on, it’s really hard to see which control does what.

The app is rather horrible, too. When the purifier is turned off, you can barely see the controls on the app’s screen, and I had to squint to see what was going on. From the app, you have all of the same controls as on the fan’s control panel. Plus, you can set schedules for when the purifier turns on and off. Schedules are rather basic, as you can just set on and off times, not which mode you want the purifier to turn on it, which seems like a missed trick.

There are Amazon Alexa and Google Assistant skills too, with basic control over the fans. With both skills I could turn the air purifier on or off. I couldn’t get Google or Amazon to understand how to change the fan speed mode, or set the auto mode.

Performance – Can clear a room quickly and efficiently

Elechomes has made the A3B very quiet. From 1m away, I measured it at 43.9dB on fan speed one, 46.5dB on fan speed two, and 59.4dB on fan speed three. On the first fan speed, it’s easy enough to ignore this purifier and a TV would drown the sound out. Even on maximum speed, the purifier isn’t too intrusive. Dyson’s purification fans are quieter still, though, and have a wider range of fan speeds.

To test how quickly the Elechome A3B could clean a room, I lit a smoke pellet in my office, which burns for 60 seconds, put the fan on fan speed three, and then shut the doors. I measured the time until my Nest Protect registered the threat as gone, which took 12m 38s. That’s not bad at all, although I’ve seen more powerful purifiers do the job in slightly less time.

Opening the door at the end, and the air purifier had removed the smell of smoke from the air, giving me nice and clean air.

Should you buy the Elechomes Smart WiFi Air Purifier A3B?

Although it’s smart, the Elechomes Smart WiFi Air Purifier A3B isn’t as smart as much of the competition. With a rather poor app and fiddly configuration, you can’t quite do as much with this air purifier as you can with the competition. However, some smart control is better than none.

It’s useful having the dust sensor on this fan for auto mode, but this means that the purifier only responds to some environmental issues. If you want greater response to more threats, then the more expensive Dyson Pure Cool Tower is a better choice, while the Dyson Pure Humidify+Cool also keeps your humidity levels right. Both are also high-quality fans, so they work well when the weather is hot, too.

For all the quality of Dyson, the Elechomes Smart WiFi Air Purifier A3B has to praised for its low price, especially given the features it has. Better suited to people with dust or pollen sensitivities, due to the sensor uses, this is a fairly powerful air purifier at a low price.