Available June 6 on PC, PS4 and Xbox One

I’m always filled with excitement when let loose in a new Bethesda world. Whether it’s an escape from the dragon Alduin, the sewers of an Imperial prison, or Vault 101, there’s always a sense of boundless opportunity.

Despite this, I started my adventure to the island of Vvardenfell — located in the northeastern corner of Tamriel — with trepidation after the disappointing launch of Elder Scrolls Online (ESO) in 2014. Reportedly 40% larger than Orsinium, this is the largest new area since the launch of the base game. Thankfully, it doesn’t take long for me to put my fears aside: Morrowind is shaping up to be the strongest expansion yet.

In what’s probably the worst start to a holiday this side of a United Airlines flight, the ship taking my intrepid character to these exciting new lands is hijacked by slavers. So, I might as well spend my time productively and make use of the tutorial, handy for newcomers and lapsed players in need of a refresher. But once this and my captors have been dispensed with, the port city of Seyda Neen is the first stop in this wondrous world.

Vvardenfell is a land teeming with life. Wander past the Seyda Neen’s bustling streets to find lush, verdant forests, with a scattering of lightly-animated flora writhing from side-to-side. With the appropriately-named vvardvarks scuttling past, Morrowind feels very much alive.

Set 700 years before the events of the original Morrowind, the gargantuan Ink-Cap mushrooms sprouting into the sky will be immediately familiar to returning players. Naturally, many cues are taken from the physical landscape of the original RPG, so the lava-coated wastes of the Red Mountain make a return alongside boggy marsh lands and grassy highlands. 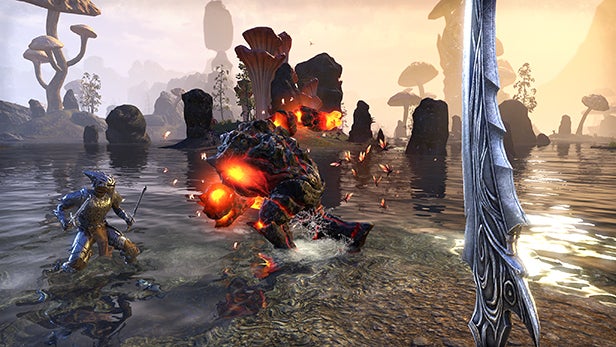 Following the main quest, however, will lead you to the gleaming grandeur of Vivec City, where the life force of legendary warrior-poet Vivec is dwindling. In exploring his mysterious illness and uncovering the true nature of the ancient daedric threat hanging over the island, you’ll happen upon plenty of lore and political intrigue in the land of the Dunmer (otherwise known as Dark Elves).

Morrowind is an intensely divided society and it’s the tension between its rival houses and tribes that drive the more interesting quests you’ll take on. What unites the Telvanni, Dres, and Redoran houses, the Ashlander barbarians and the Morag Tong, is their hatred of “outlanders”. Where Morrowind first timers will be engrossed as they unravel these divisions, ZeniMax has prepared many nostalgic treats for veterans.

So Vvardenfell is a beautiful – but threatening – world, which makes the new Warden class the perfect fit for taming and using the environment to your advantage. The standout is the DPS skill line ‘Animal Companion’ in which you can call upon Cliff Racers and eventually a permanent War Bear to deal out damage. Equally there’s the ‘Green Balance’ line for healers, with cone and area-of-effect healing. Lastly, ‘Winter’s Embrace’ is more tank-focused with the self-buff Ice Fortress ability. Such a wide range of options on offer for just one class shows the level of variety the game has reached since the release of vanilla ESO, which is certain to extend Morrowind beyond the promised 30 hours of extra content.

Whilst the core of ESO’s appeal has always been in PvE, ZeniMax appears to be keen to address the balance with Morrowind. First we have Battlegrounds, a very distinctive brand of PvP. Designed to be much more fast-paced, three teams of four players fight in three game modes: Capture the Flag, Team Deathmatch, and Domination. Matches can get rather chaotic, but each of the varied maps shares a claustrophobic feel, while also allowing a range of abilities to shine. The short, sharp bursts of gameplay make for the perfect break from exploring Vvardenfell at your own pace. 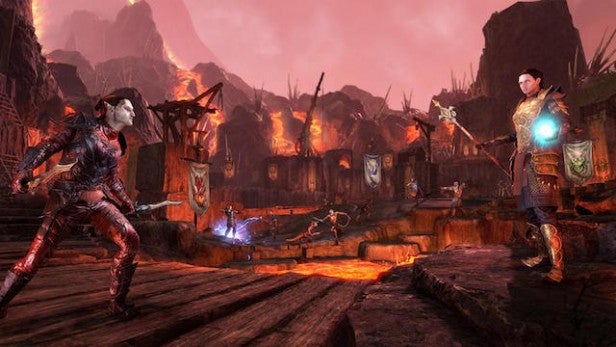 Rounding off this dense package is a new Trial: Halls of Fabrication. In this new 12-man raid-style missions, hardcore players can test everything they’ve learned in a punishing jaunt through Sotha Sil’s Clockwork City. With wonderfully-complex level design, this will be a memorable challenge for players looking for the very best rewards.

What’s striking about Elder Scrolls Online: Morrowind is how polished the game was for me. I did have occasional connection issues whilst queuing for PvP matches and some textures were very slow to load at times, but overall the expansion looks very promising ahead of its June 6th launch. Ever since 2014, ESO has clearly been one long learning curve for ZeniMax and Bethesda, with the excellent Morrowind the result. With an intriguing narrative holding together a refreshing new class and PvP modes, Morrowind represents an MMO going from strength to strength.