The Eko DeLuxe Phantom Sensor Bin 20+20L is brilliantly designed. It opens super-quietly and its touch-free operation means you can cut down on germs and mess, reducing the number of times you need to wash your hands. The door wings can make emptying larger items a bit tricky, plus the bin is a touch expensive. Nevertheless, it's an excellent addition to any kitchen.

What is the EKO DeLuxe Phantom Sensor Bin?

A kitchen bin is one of the dirtiest items you’ll find in a home, so avoid touching it and you can cut down on the number of times you need to wash your hands while preparing food or cleaning up. The EKO DeLuxe Phantom Sensor Bin uses tech to do that, with a motion sensor that opens the lid automatically.

A neat design, relatively small footprint and excellent operation make this the best kitchen bin I’ve used. I tested the 20+20L model, although it’s also available with a single internal bin, and 30-litre and 45-litre capacities.

If you want a stylish addition to your kitchen then the EKO DeLuxe Phantom Sensor Bin is as good as you’ll find. Finished in stainless steel, the bin’s cuboid body and rounded edges look smart. Measuring W270 x D460 x H660mm, the Phantom Sensor is a relatively compact unit, not taking up much more space than my old Brabantia bin, with its 30-litre capacity.

Inside the bin are two 20-litre removable plastic inner liners. You have the option to choose how you want to use the internal space. For me, it made sense to use one for general rubbish and one for recycling. Bin bags are easy to fit, and the inner plastic bins easy to remove for emptying. 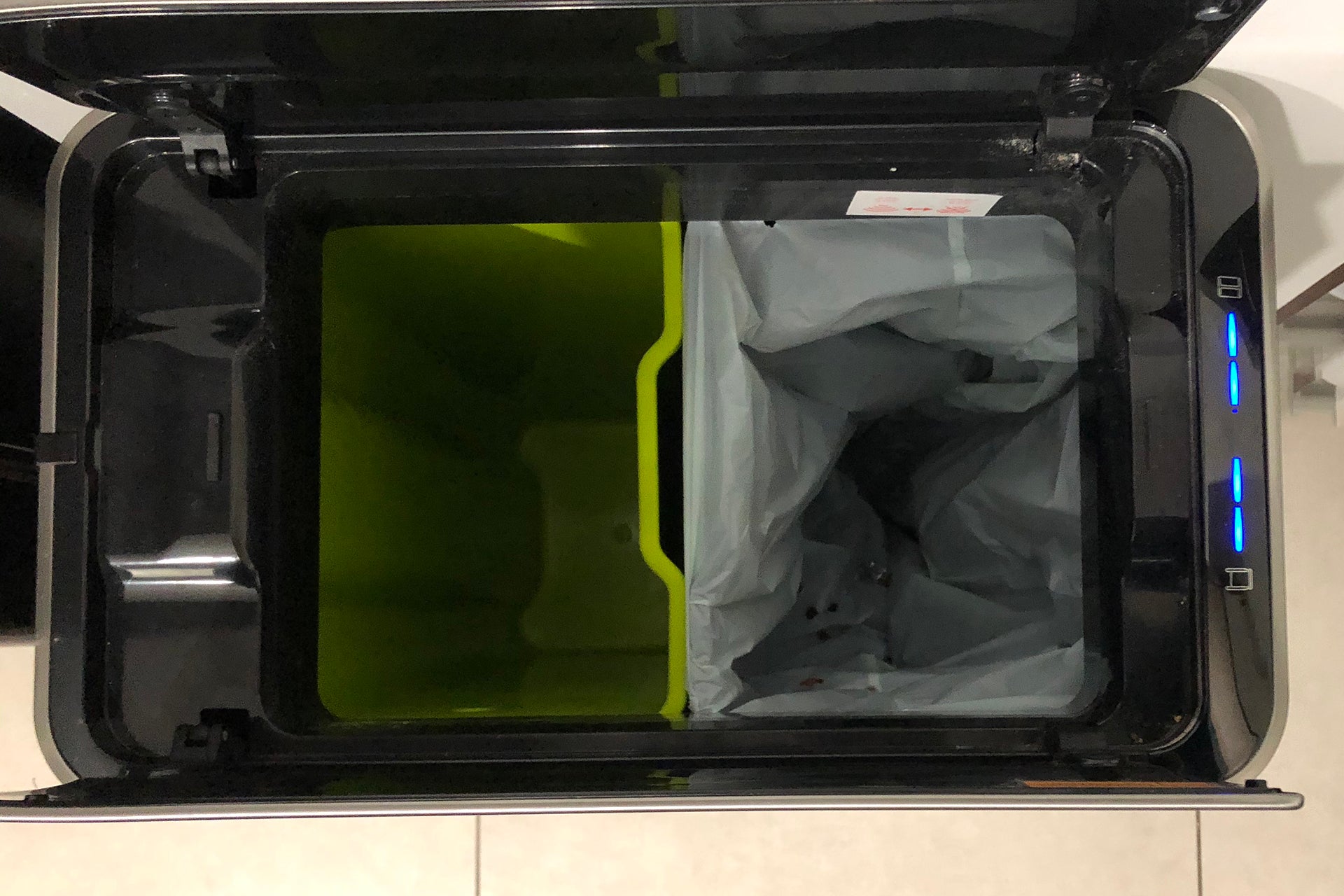 Having two compartments is super-useful for separating rubbish

Despite my old bin being 30l, I didn’t find that I had to empty the EKO’s 20-litre bin any more frequently, making it a better size for my home.

Different from a regular bin, you’ll have to fit six AA batteries into the lid in order to get the motion sensor feature to work. Without batteries, there’s no way to open the lid manually, bar lifting off and removing the entire unit.

Inside the bin lid, there’s a switch to turn off the motion sensor – although I recommend you leave this on. There’s no option to adjust how long the lid stays open for, although touch controls on the side of the bin let you permanently open the lid and then close it when you’re done. 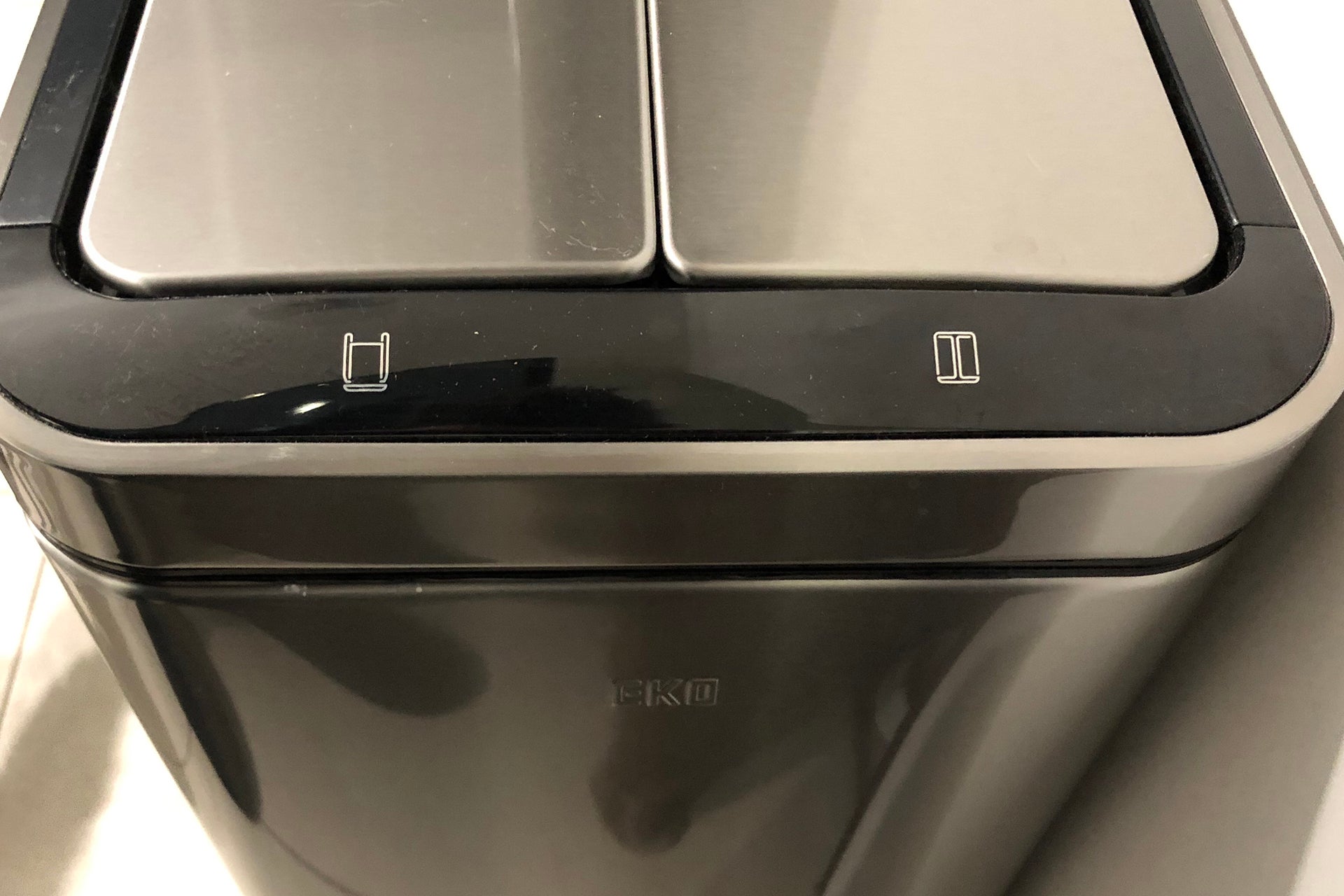 EKO DeLuxe Phantom Sensor Bin performance – Works brilliantly, although it can be fiddly to get larger items in at times

The EKO DeLuxe Phantom Sensor Bin has two wings that open upwards when you wave your hand over the motion sensor. It takes a few goes to get used to how it works, but once you do, it’s brilliant: no touching or even going too near the lid to get it to open quietly. This means you avoid getting any dirt from the bin onto your hands, or vice versa.

When the lid opens a row of blue LEDs light up, slowly turning off to indicate when the lid is about to close. In general, I found that timings were sufficient for throwing items away or scraping off a chopping board. If you have a plate with greater mess to scrape, it makes more sense to use the touch controls to permanently open the lid. 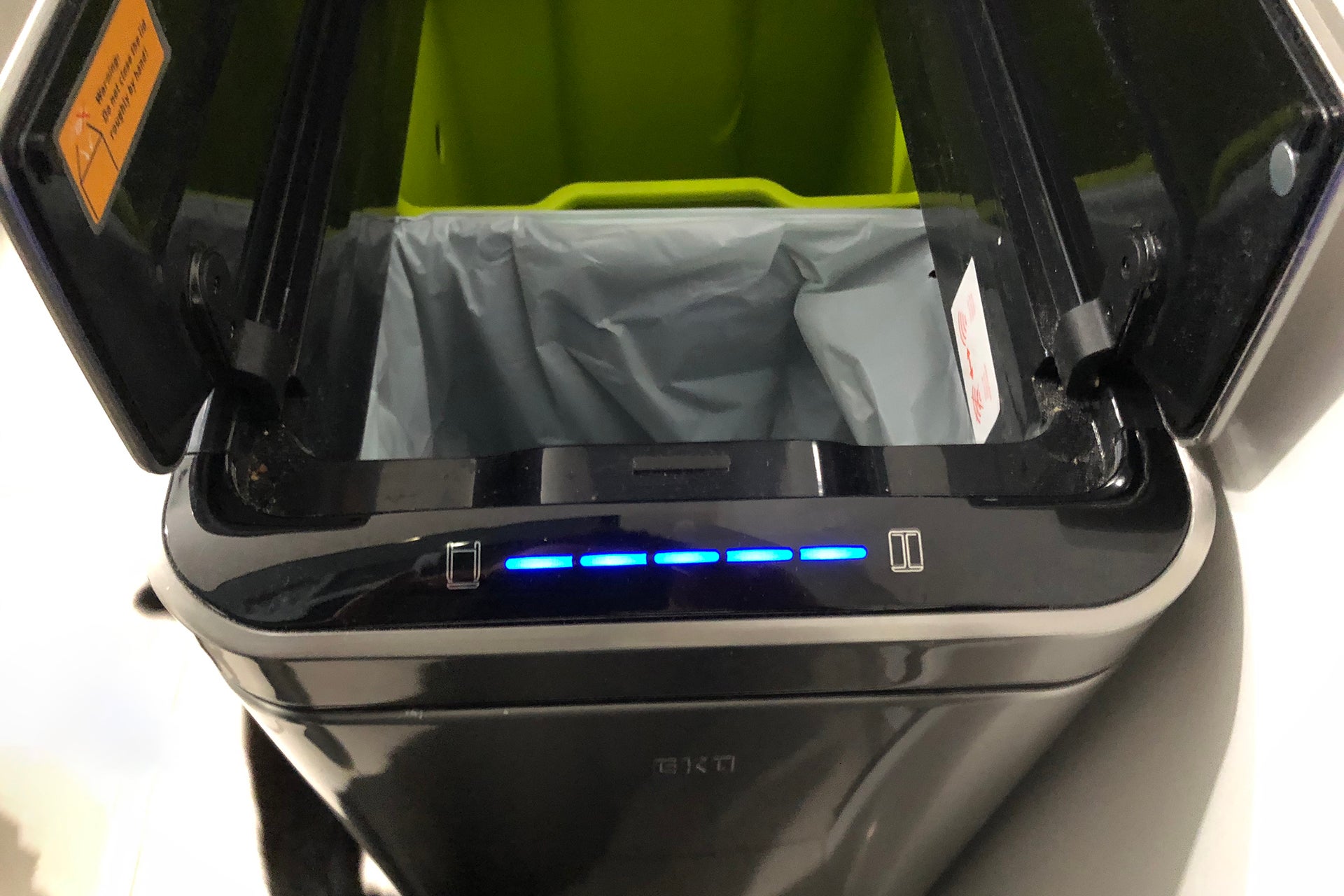 The motion controls work brilliantly, but larger items can be hard to get between the door wings

Most items proved easy enough to get into the bin, but if you have larger pans or plates then it can be a little bit fiddly to get them between the wings. For really messy jobs, such as throwing away a chicken carcass, you may need to take the lid off and empty the old-fashioned way; fortunately, I didn’t find I had to do this frequently.

Should you buy the EKO DeLuxe Phantom Sensor Bin?

It isn’t cheap, and you may question the need to have a motion sensor on a bin. However, on using the EKO DeLuxe Phantom Sensor Bin you’ll  realise how useful it is. Not having to touch the top  of the bin meant that it stayed cleaner and I had to wash my hands less frequently while preparing food.

I prefer the dual-bin option, giving space for recycling alongside general waste – it’s kept my kitchen looking tidier – but there are other options if you want a single bin.