Eizo is a name that instantly commands respect. Indeed, it’s a company that doesn’t really make bad products, just the kinds of products that cost more than ordinary folk are typically willing to part with. While the Foris FX2431, which is marketed as a high-end multimedia and gaming display, is cheaper than the company’s bleeding-edge professional efforts, at just less than £900 this is still a display most people will only dream about.


Given the price it’s no surprise to find this display is crammed to the gills with high-quality circuitry, a premium VA panel and loads of connectivity. However, while this is ostensibly a consumer product, it still retains Eizo’s habitual industrial looking design. This is a large, chunky monitor finished entirely in matte black plastic, not the kind of monitor that’ll grace you’re living room.


So it’s no style icon, but where it impresses is in its build quality, which is in a completely different league to the vast majority of monitors, even those that cost £400 or more. Despite weighing in at a substantial 10.5kg with its stand (8.1kg without), it remains very stable and well planted. 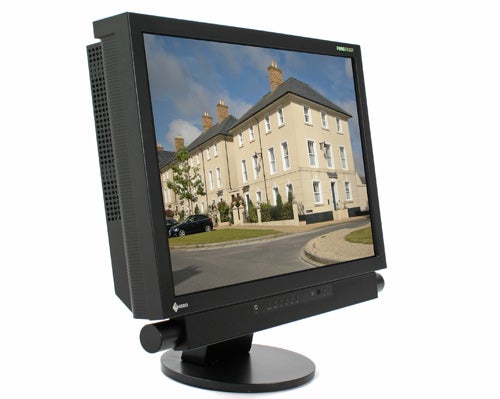 It’s not necessarily the most adjustable screen, though. It doesn’t, for instance, have pivot built into the stand, though in every other respect it can’t really be faulted. It rotates on its stand 172 degrees left and right, tilts 35 degrees up and five degrees down, while the height adjustment range is 24cm. 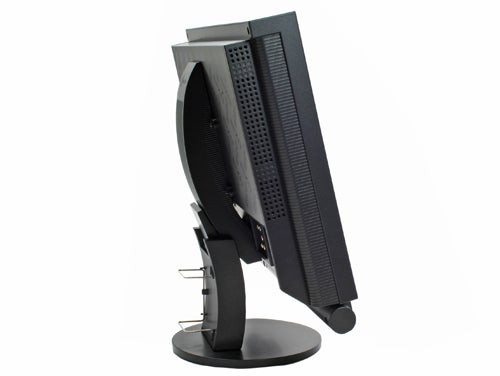 Much of its stability can be attributed to the slightly unusual height adjustment mechanism, where the monitor slides up and down on rails. It’s not the easiest system use, you need to grab the screen with two hands to move it up and down, but once in place it isn’t budging!


Being a proper 24in monitor with a 16:10 aspect ratio, the FX2431 sports the usual 1,920 x 1,200 native resolution. While statistics can be quite misleading, especially where monitors are concerned, on paper the VA panel ticks all the right boxes. It’s rated at up 360 nits brightness and has a 1,000:1 native contrast ratio, boosted to up to 2,000:1 in dynamic mode. This latter figure is pleasingly realistic, eschewing the kind of ridiculous claims some manufacturers choose to make. 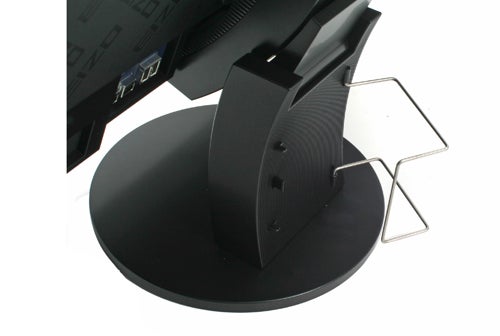 Response times are quoted at 6ms grey-to-grey and 16ms black-white-black, both fairly typical values and not unrealistically low. Finally, there’s the 96 per cent Adobe RGB colour gamut, which is about what you’d expect for a high-end CCFL backlit LCD monitor such as this.

Since the FX2431 is more overtly entertainment orientated than Eizo’s other monitors, its feature set is slightly different to suit. This starts with the connectivity, which is not only very thorough, but arranged in a pleasingly accessible manner. Connections point outward for easy access, so you can actually see what you’re plugging into, while the digital and analogue connections are separated either side of the central pillar. Our only gripe would be that there are no easy access connections on the side, like a USB port, though there is a headphone jack on the front fascia. 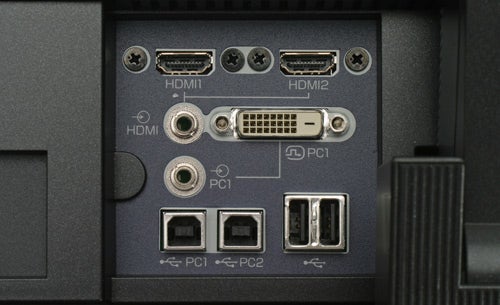 As for the connectivity itself, on the digital side of things you get two HDMI ports and a DVI port, with the obligatory D-SUB providing the analogue backup. Unusually, especially for a monitor, the HDMI ports accept 1080p/24p (48Hz) signals, which ensures superior judder free playback of high-definition Blu-ray discs. This is an especially unusual feature for a PC monitor, separating it from other even high-end efforts. They’re also CEC enabled, though auto-switching of inputs is turned off by default. 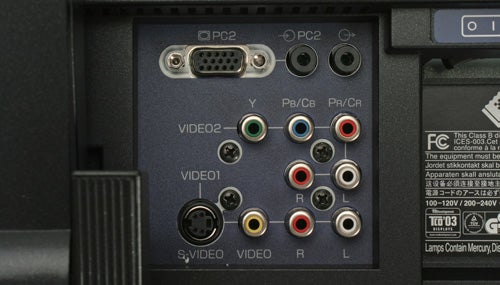 There’s also a large selection of AV inputs, comprising component, composite and S-Video, with RCA audio jacks to match. There are a total of three 3.5mm audio inputs, one each matched to the DVI and D-SUB ports and another for one of the HDMI ports, which both carry audio as well.


For audio output there’s a 3.5mm speaker jack, though Eizo has missed a trick here by not including an optical audio output as well – a feature found on the similarly targeted NEC Multisync LCD24WMGX3. Indeed, this is a potentially very significant oversight given the astronomical price of the FX2431, though the NEC appears to have been discontinued, with availability very scarce now.

Finally there are also two upstream and two downstream USB ports, allowing you to connect a mouse and keyboard to the monitor and two separate PCs, essentially using the monitor as a KVM. This is a very useful feature on any display with so many inputs.


Moving to the front of the unit, the FX2431 features a straightforward array of controls, with ‘Select’ and ‘Enter’ buttons joined by four-way controls arranged in a line. There’s also the aforementioned headphone jack here, which is always a welcome sight. Navigating the functional menus is pretty easy, with the Enter button entering and exiting options, the up and down arrows moving around them, and the left and right ones adjusting settings. 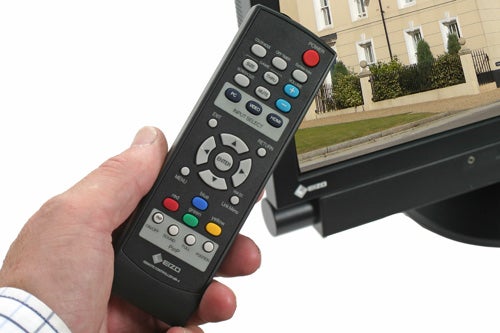 However, as the small infrared receiver to the right suggests, you needn’t use these as a remote is also supplied. It’s a very nice one, too. A little chunky it might be, but it’s well arranged, giving you quick access to input selection (divided by PC, Video and HDMI) and plenty else besides. We’d be very happy if more monitors came with remotes, though not many have enough features to justify one.

Sitting alongside the infrared sensor is another kind of sensor, an ambient light one. This, when enabled, will automatically adjust the brightness of the display to suit the conditions, so you needn’t be blinded when the lights are off. It also means your monitor won’t use more power than it strictly needs; there’s even a power metre (titled EcoView Index on the remote) that appears in the bottom right corner to give you a rough idea how energy efficient the settings you’re using are. 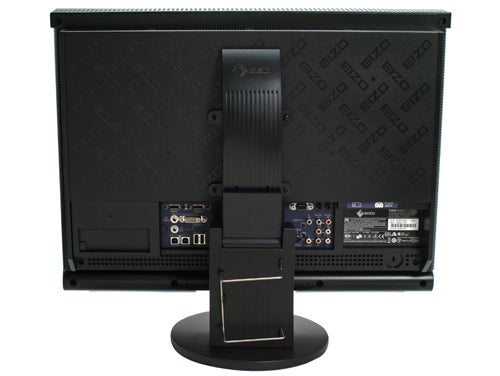 While there is a large number of settings accessible through the OSD, a few are only accessible via the remote. This includes another of the FX2431’s entertainment orientated features, the Thru mode. This disables some of the display’s image processing, reducing perceived ‘input lag’ to 1/60th of a second – around 16ms. This is either a good or a bad thing depending on your point of view: good, because it might give you the upper-hand in combat; bad, because you’ll have no excuses if you lose!


Another gaming related function is the Size button, which gives you control over how the monitor scales content. There are numerous options available depending on the source and resolution, but the main thing to know is that the FX2431 fully supports 1:1 pixel mapping and scaling without distortion, so any 16:9 aspect sources (such as 1080p signals from a Blu-ray player or gaming console) will be displayed without being stretched.


This also applies to standard definition games content from previous generation consoles (even a PSP), which is upconverted with minimal loss of fidelity and no distortion. There’s even a special 8-bit game mode called Real Image, which reduces blur when playing old 2D sprite based games. All fairly niche features, but if you’re a gaming nut who has a large collection of consoles (old and new) then these features may appeal.

Also accessible via the remote is a full set of picture-in-picture options. You can adjust the position, switch to full-screen mode and toggle which input drives the integrated speakers. These are superior to your typical monitor efforts, proving more than good enough for watching TV on or casual music listening, but distortion does creep in at high volumes – especially when big explosions kick-in. You can control the balance, treble and bass from the ‘Sound’ menu in the OSD, as well as options for Bass Boost and a Stereo Expander, both of which are relatively effective.


Colour controls on the FX2431 are numerous. There are numerous presets, comprising Text, Picture, Movie and Game modes. Alongside the usual brightness and contrast controls, you can also adjust the black level (RGB), saturation and hue, while colour temperature options range from 4,000K to 10,000K. Under an Advanced Settings menu there are further options, including a toggle for the dynamic contrast mode (labelled ‘ContrastEnhancer’), edge enhancement (OutlineEnhancer) as well as controls for gamma and gain.

At this price one expects pretty stellar performance and the FX2431 duly delivers. Out of the box it comes well calibrated, so very little tuning is required to get it looking good – we merely tweaked contrast down from 50 to 45 and set the colour temperature to 6,500K. It put in a near flawless performance in our testing, producing smooth gradients, well graduated grey tones and striking but accurate colours. Backlight bleed is more or less non-existent, resulting in a pleasingly uniform picture across the whole panel. Text production is also razor sharp, with no discernable rainbow artefacts around characters.


This performance is borne out in all kinds of scenarios. Photos look crisp and vibrant, while games also benefit from the vivid palette and inky blacks. As with any LCD based display there is some motion blur, but it’s kept to an acceptable minimum at all times. Viewing angles are also excellent, with some minor (and unavoidable) contrast loss, but little in the way of colour shift. 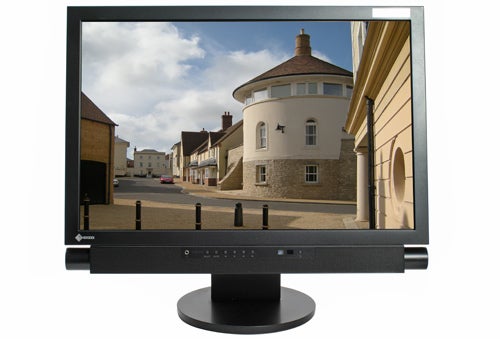 In terms of sheer wow factor, though, it’s really high definition video that benefits the most. Given this monitor costs as much as many a large format TV it’s just as well, but the Full HD capable resolution, superb quality panel and 1080p/24Hz processing means the FX2431 can easily match expensive LCD TVs in terms HD video fidelity. Small details are brought out with great alacrity, while even the dimmest lit scene is produced with plenty of detail. It’s an impressive effort.


Yet, is it an effort worth paying nigh-on £900 for? However good it is, it’s hard to make a persuasive argument to call the FX2431 good value for money. You certainly get what you pay for in terms of quality, but at this price one is really looking for perfection and it doesn’t quite deliver that – the lack of an optical audio output alone will put the frighteners on the kind of people willing to spend this kind of money. Moreover, unless you must have the kind of features this display offers, the likes of the HP LP2475w and NEC Multisync LCD24WMGX3 (while it’s still available) offer comparable performance and no shortage of features for a fraction of the price.


Nonetheless, assuming you’ve got the money to spare and the need for such a versatile monitor, the FX2431 is outstanding and with Eizo you’re unlikely to suffer the kind of panel lottery sometimes experienced with more mainstream manufacturers. You also benefit from a lengthy five year warranty, which is a reassuring feature when you’re spending this much money.


There’s no denying the quality of the Eizo Foris FX2431; its image quality is exceptional and it has a wealth of useful features to exploit, allowing you to get the best from any source. It’s just the price and the lack of an optical audio output that grate, making this a very impressive but also slightly flawed proposition.