Compared to its competitors, Eizo monitors have always been rather rarefied beasts. Its displays have been known in particular for their colour accuracy and as such, have been targeted at the high-end of the market, for pre-press proofing, video editors and keen amateur or professional photographers. Consequently, its displays have tended to lack features that would make them appeal to the average consumer, such as fast response times, high brightness and any degree of affordability.


Eizo is ringing the changes with the 24in HD2441W, which is aimed firmly at the movie watching, PC and console gaming fraternity, yet also offers better colour accuracy than its competitors. It sports a resolution of 1,920 x 1,200 and boasts the presence of not one, but two HDMI ports. 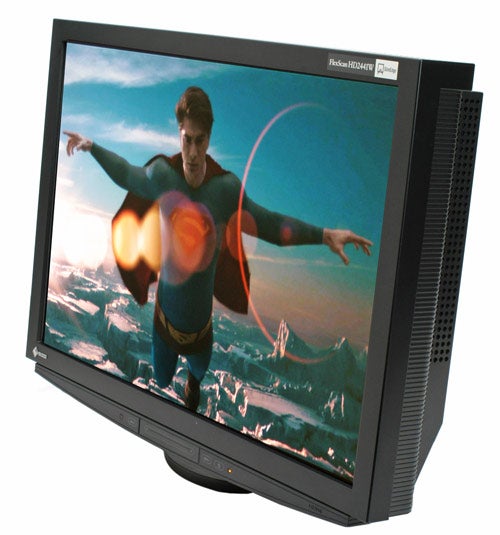 Eizo claims the HD2441W is the first 24in PC monitor to ship with full 1:1 pixel mapping over HDMI, which Eizo refers to as ’16:9’ Full’. This means that when fed with a Full HD 1,920 x 1,080 images from HD DVD, Blu-ray, Xbox 360 or PS3, it will show it at exactly that resolution, leaving black bars at the top and bottom, without stretching the picture to fill the screen. For purists this is an important factor at maintaining image quality and if it’s not something you’re bothered about, it should be. The BenQ FP241W claimed to offer this feature but at launch it only worked over D-Sub. It’s rumoured that this can now be fixed via a Firmware update but until we’ve seen this for ourselves we can’t confirm it.


Eizo is also claiming a dynamic contrast ration of 3,000:1 and a brightness of 450cd/m2, which is bright, a 6ms grey-to-grey response time (16ms on/off) and an Outline Enhancer for sharpening images. You also get a Picture-in-Picture mode.

As well as the two HDMI ports, HDCP capable, naturally, the panel offers DVI and VGA connections and two upstream and two downstream USB ports. By switching between USB upstream ports you can have two PCs connected to the screen with one keyboard and mouse set, making the monitor essentially act as a KVM. There’s also an audio pass through cable so you can use one set of speakers with each PC. There’s a left side mounted headphone socket, next to the two USB ports.

There are some things absent though – most notably a component input, while S-Video and composite are missing also. This limits connectivity with items such as a PlayStation 2 or a Wii, which is a shame. Of course you might not wish to attach a, Wii which can only output 480p or 576i as the picture will need to be upscaled considerably, but ironically Eizo makes much of the fact that it has processing especially 480i. Without component, this seems almost redundant.


With the HD2441W, Eizo is aiming to combine these features with appeal of its legendary colour accurate displays to create a ‘Prosumer’ level display, and it has largely succeeded with this fine example. Of course it’s still more expensive than the likes of current offerings from Dell and Samsung, but that’s what you would expect from Eizo.

The Eizo is impressive from the moment you take it out of the box. DVI, HDMI, VGA and USB cables are all supplied, which is great. It comes out in one piece with the stand already attached, which saves time. With the stand attached it’s a fairly heavy 10.3Kg. The actual panel is remarkably thick, as much as the 26in 26in NEC LCD2690WUXi, which bodes well for image quality.


The stand is quite an interesting beast. It has height adjustment and can be moved up and down but it’s curved, dubbed ArcSwing, so that at the bottom it angles upwards and at the top angles down. If you want it straight on you have to have it in between, but that means that you can’t raise it up very far and have it straight on. This proved controversial in the office. I liked it, others didn’t. It’s actually really comfortable to work with it on the desk angled up but I’m not sure why you’d ever need it angled down. There is no rotate function for portrait mode but it does rotate round on its circular base. 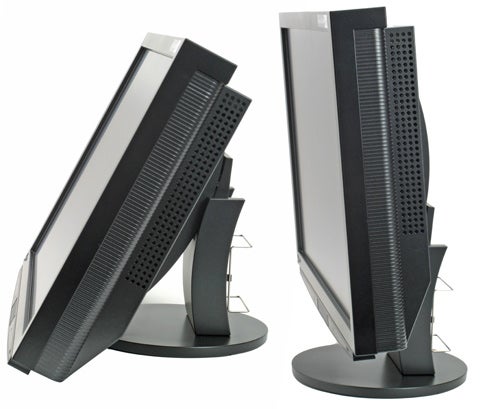 A label on the front describes the bezel as having a ‘SlimEdge’, though actually it’s no thinner than the average 24in display. While Eizo may be going more consumer friendly with the features, the look is a little industrial for my tastes, with a black bezel and thin white lines round the OSD buttons located on a curved panel stuck onto the underside. It’s also available in white and in silver, which might look a bit more home friendly.

A unique feature of this screen is the OSD controls. Rather than regular buttons it features a touch sensitive strip, which you slide your finger along to move between options. To confirm a selection you tap near the centre. It takes a little getting used to but it works well, though I wished when you scrolled to the right and got to the end it wrapped around to the left. Also, with no direct buttons, it’s a bit of a faff to get to things you might access regularly. 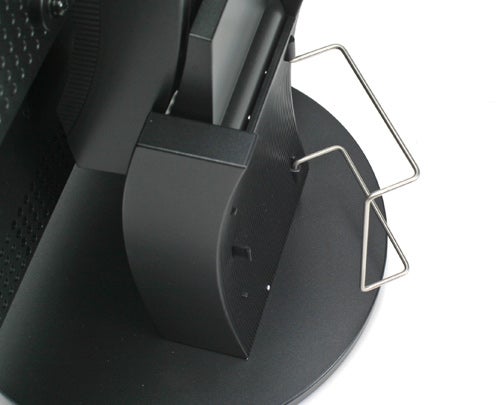 Inside the OSD you’ll find a large amount of options to choose from. There are several preset picture modes, Picture, Movie, sRGB, Text and a custom mode. There’s a Standard mode when hooked up via HDMI.


Other options you’ll find are the ability to adjust bass and treble from the headphone output, something I’ve never seen on a monitor. There’s a monitor settings option, where thankfully you can turn off the annoying beep that’s on by default. You’ll also find an Auto Brightness setting, which will adjust the brightness levels automatically depending on ambient conditions. You can also turn Picture in Picture on and alter the translucency.


Once out of the box I didn’t take long to start testing the screen and it was notable that the first thing I hooked it up to was a PlayStation 3, rather than a PC. Pleasingly, the Full 16: 9 mode over HDMI worked as advertised, with black bars at the top and bottom, maintaining the aspect ratio of the 1,920 x 1,080 input. The picture quality was immediately notable for its bright, clean and vibrant colours. I had no concerns over the speed of the panel, with no appreciable lag spoiling the fun. There was plenty of detail in the darker areas but if it’s a problem you can delve into the menu to discover a gamma setting, so you can raised it from the default 2.2 to 2.0 and there’s a 1.8 setting for Macs too. 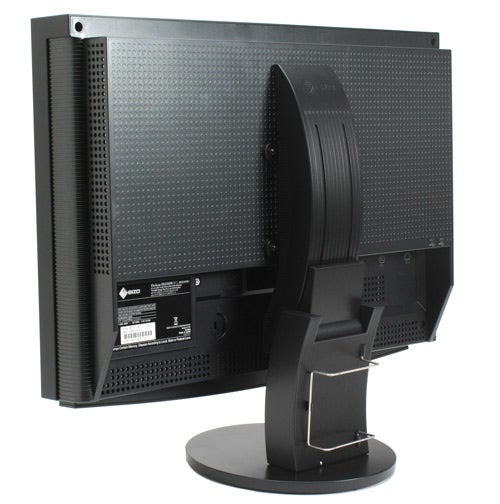 I then plugged in an HD DVD player and was treated to the delights of Superman Returns in HD. Words that sprang to mind when viewing were dramatic, bold, solid, natural and unfussy. The level of detail was tremendous with the sharpness of the image really coming to the fore. Skin tones were natural, while the colours were true. They weren’t quite as vivid as say, a decent plasma, but they were still vivid, and this is a different viewing experience. This means that Eizo doesn’t have to rely on a high gloss coating, which normally boosts these things, but can make the picture look overly reflective. 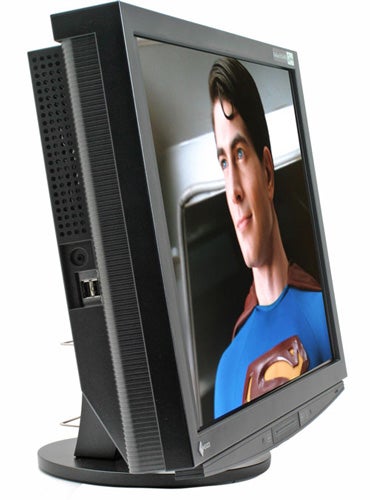 Moving to the PC via DVI, the brightness and the sharpness were again apparent. It needs little tweaking to get a great image and web sites and general Windows work was a pleasure. In particular whites seemed purer and truer than any monitor I’ve used recently and other colours benefit as a result. This is especially important for photographic work. An ICC profile is included on the CD and there are a range of tweaks possible via the OSD to get it just how you want it.


My favourite TrackMania Nations game was fired up and I was treated to smooth gaming with the predominantly green colours strong without being too intense. This is certainly a great gaming monitor. Viewing angles are very good. The screen does go a little dark as you go to the extremities but there’s no massive colour shift as poorer screens tend to do.


I’m not sure this screen would be considered by many gamers though, simply because of the price. It’s just too much when good screens such as the BenQ FP241W are available for only £420 or so. 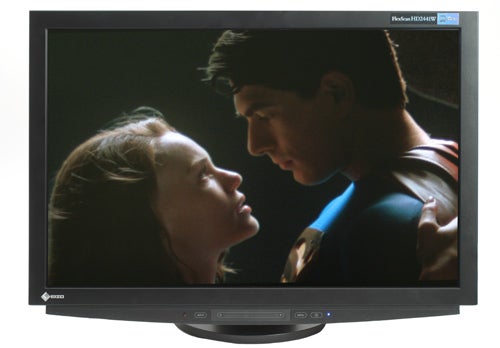 This screen is aimed at those who need it to make money from their work and as such are willing to pay extra for its excellent colour accuracy. If that’s not the case then this screen, while excellent, doesn’t justify the price. If money was no object, this is most definitely the 24in display I’d like sitting on my desk, but if your budget is more realistic you’ll probably have to look on with envy at this one and pick up something else instead.


Unless colour accuracy is vital or you have money to burn the Eizo FlexScan HD2441W doesn’t look good value compared to some of its competitors. It’s not the most stylish display out there either. However, for the professional, the discerning, and the well heeled user, this is a quality screen that sets a reference point for displays under £1,000. If you are willing to pay more to get that colour accuracy and also want great gaming and HD performance, then it’s the best 24in screen around at the moment and as such earns a recommendation.