How long does the EGO Power Multi-Tool MHSC2002E take to charge and what is the battery life?

Key to EGO Power’s cordless performance across the company’s tool range is the ARC 56v battery pack, available in capacities from 2.0Ah to a monster 7.5Ah. The latter offers a whopping 420Wh of power in a portable format, while competitors’ step up to this capacity with belt or back-pack mounted options. The pack’s lithium cells are arranged in an arc shape for better cooling, allowing the high-speed charger to take even the largest of these packs from flat to full in under an hour. 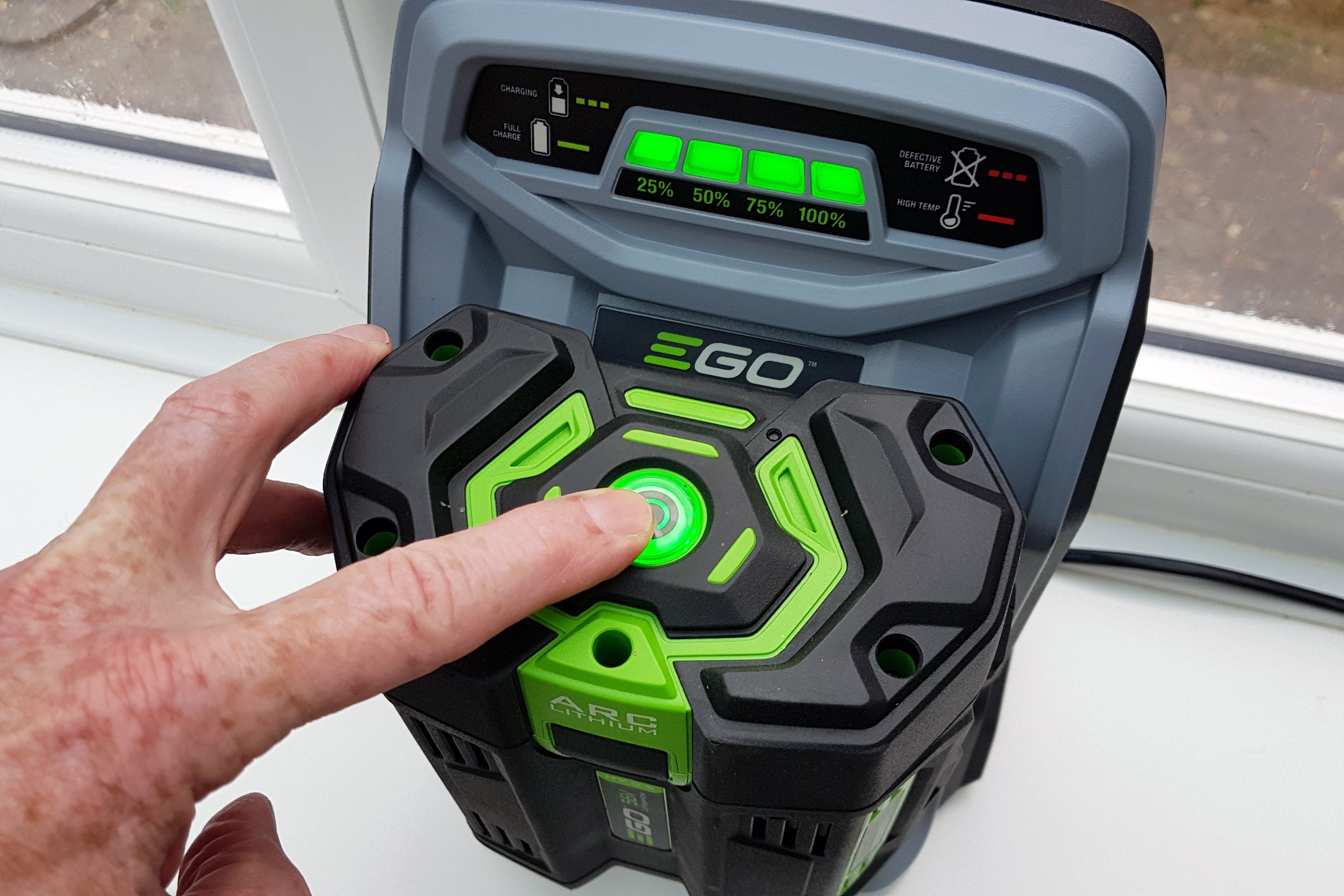 The charger itself is upright design to take up less space on the workbench or can be wall mounted to keep it right out of the way. In several tests, the supplied 5Ah battery charged from fully exhausted to 100% showing in between 38 and 43 minutes. The charger gets pretty toasty and the fan noise is noticeable, but the battery pack remained only a little warm, so its cooling tech is effective.

Out of the charger, a button on the top of the pack triggers a battery level light; green for good, red for pretty much flat, and orange for getting close to needing a charge. Depending on throttle trigger use, constant or stop-start running and even the tool used, you will get different run time results. Thankfully none of them are going to leave you wanting in a typical domestic environment. We are talking nearly an hour with the line trimmer and brush cutter, an hour and half with the hedge trimmer and a whopping two hours with the pole saw. 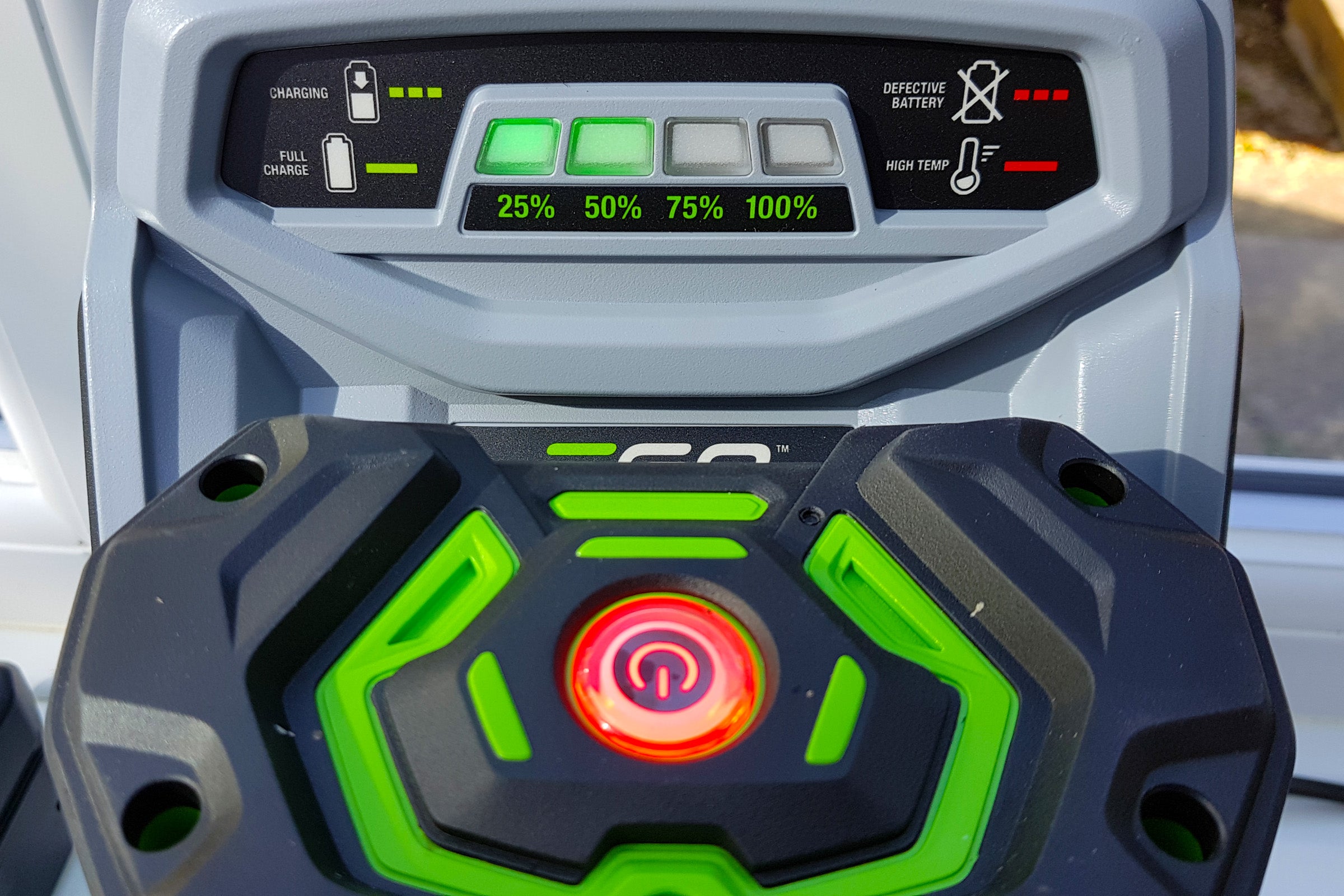 Given the stop-start nature of these jobs we could easily see a single charge lasting a morning, recharge over lunch and getting another good session is the afternoon. Ideal.

With a lot of coppice woodland here at the farm, the pole saw became the tool of choice. The 10in blade is fine for high-up and overhead pruning and the reach is ample. We would definitely invest in the EP7501 extension for the extra reach it would afford for taller branches though. The chain slows or stalls in some tough oak limbs and the chain is a standard pitch for easy sharpening or replacement. 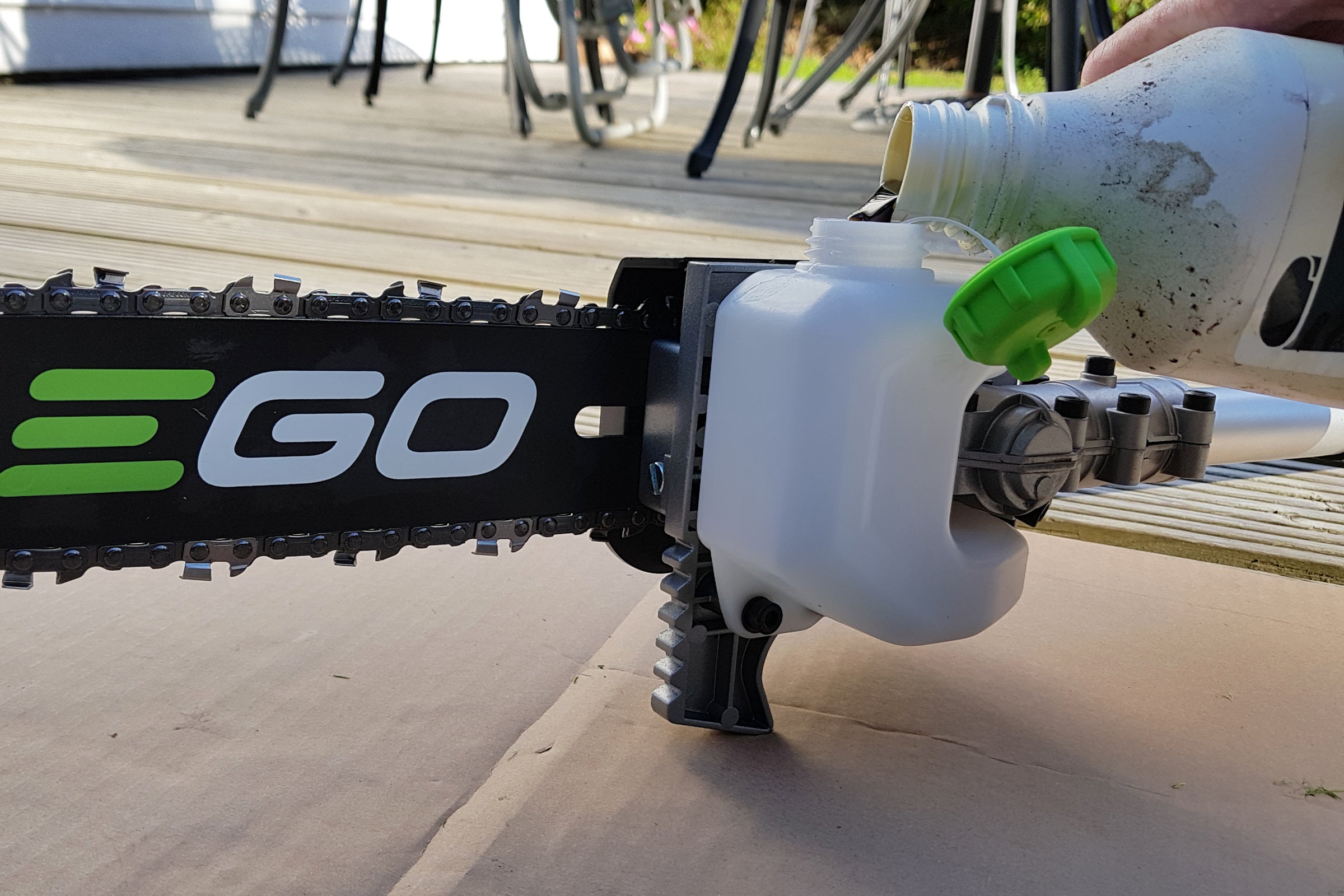 Chain tensioning on the bar and oil feed is standard chainsaw operation stuff and our only gripe with the EGO Polesaw is the pole. It’s a little short to be truly versatile high-reach saw and too long to use easily at ground level or cutting off the sawhorse. If you are pruning, you will probably need another saw to reduce the branch length down for transport. 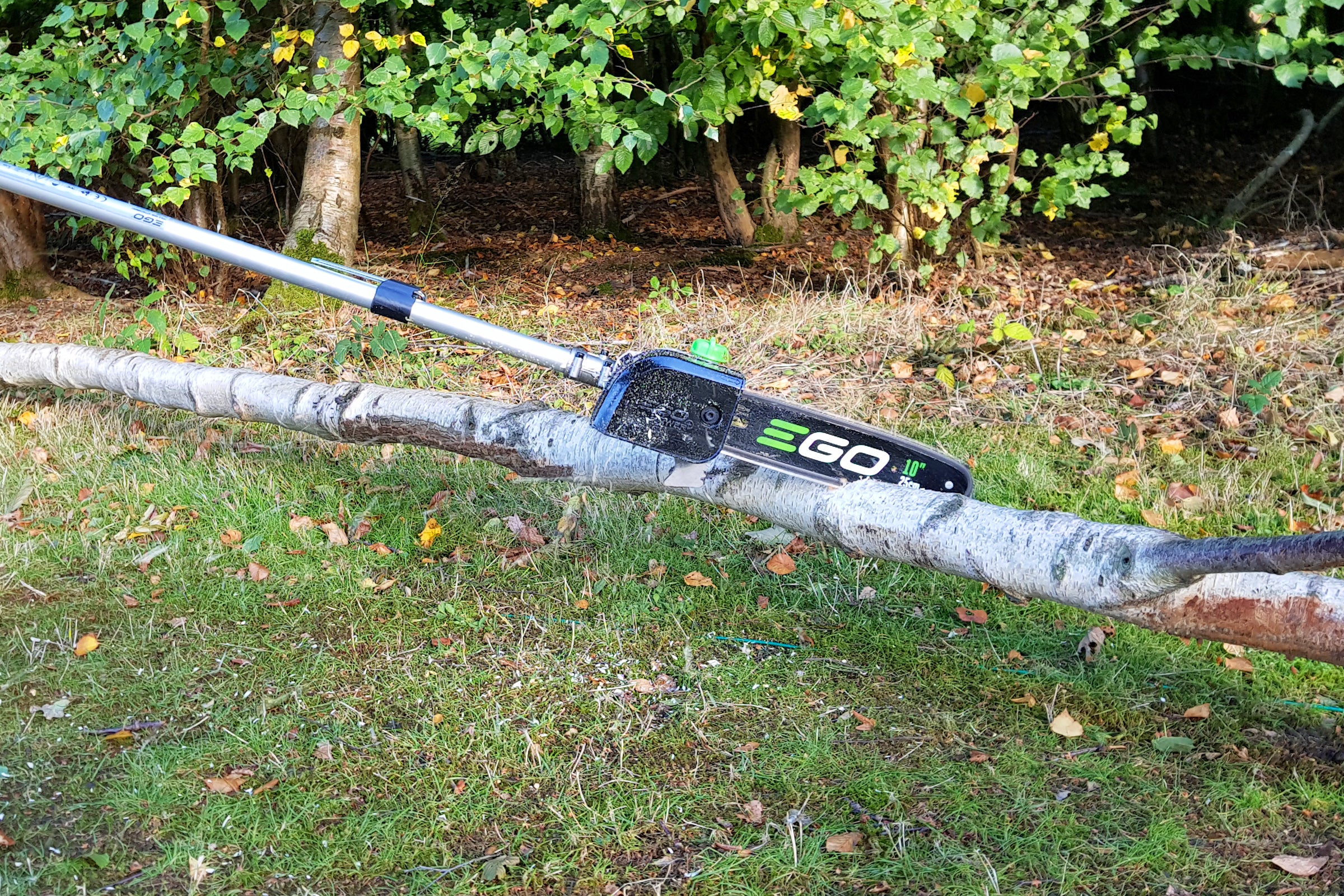 The very same caveat can be levelled at the hedge trimmer. This is a very powerful tool with good length blade and a pivot lock neck to enable hedge shaping and square topping ornamental rows. It went through thicker twigs and smaller branches up to 20mm in diameter better than any other cordless hedge trimmer we have tried and it competes favourably with mains powered models in this respect. On the downside, the pole part makes things cumbersome at lower levels and it is every bit as heavy as a petrol pole hedge trimmer. 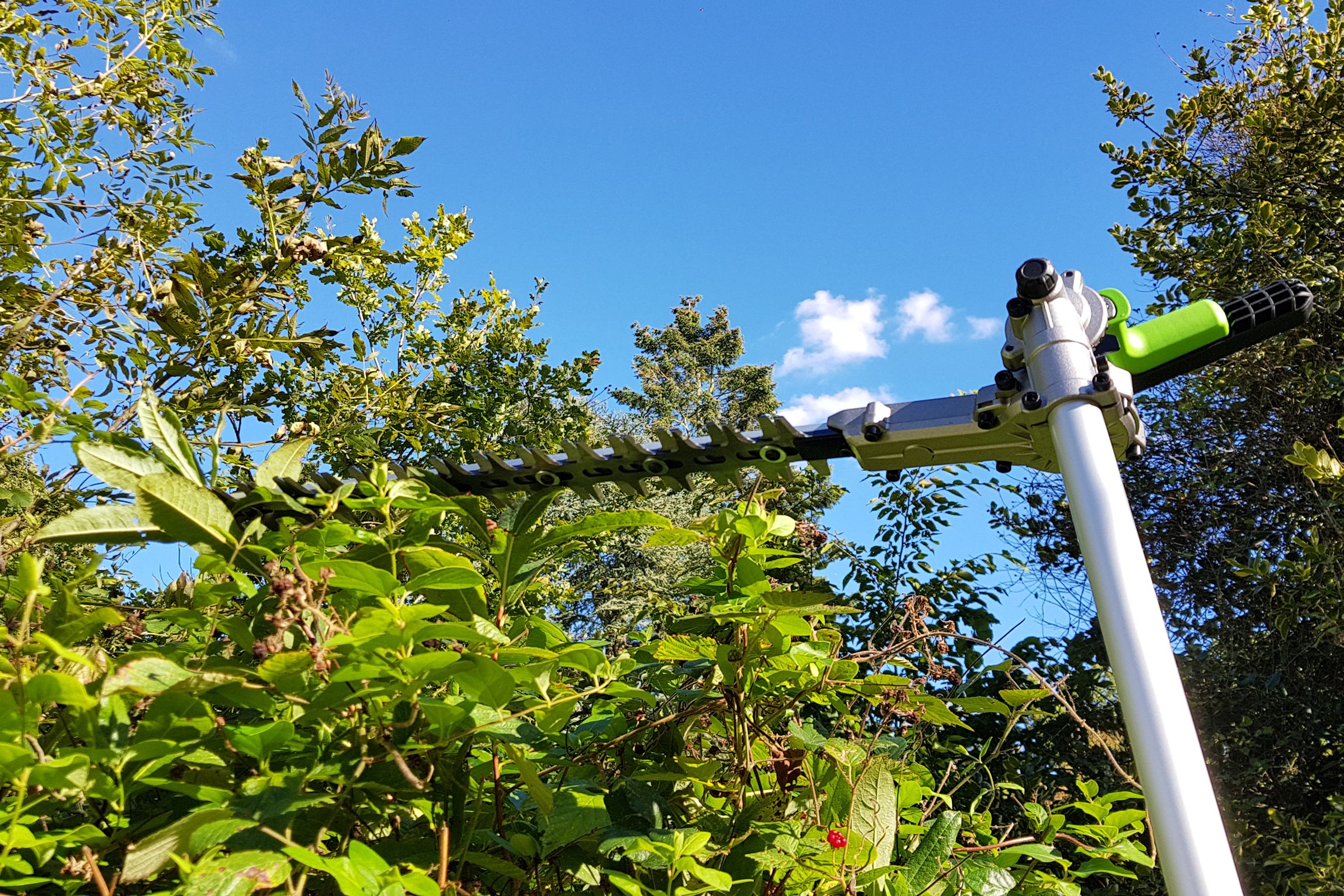 The grass and weed tools offer even better balance with the weight of the battery nicely pivoting the unit at the shoulder strap. The overall length felt too long for me and the tool’s momentum is still there despite the good balance. The shallow angle made steering the tools feel a bit vague although the blade did remain parallel to the ground. 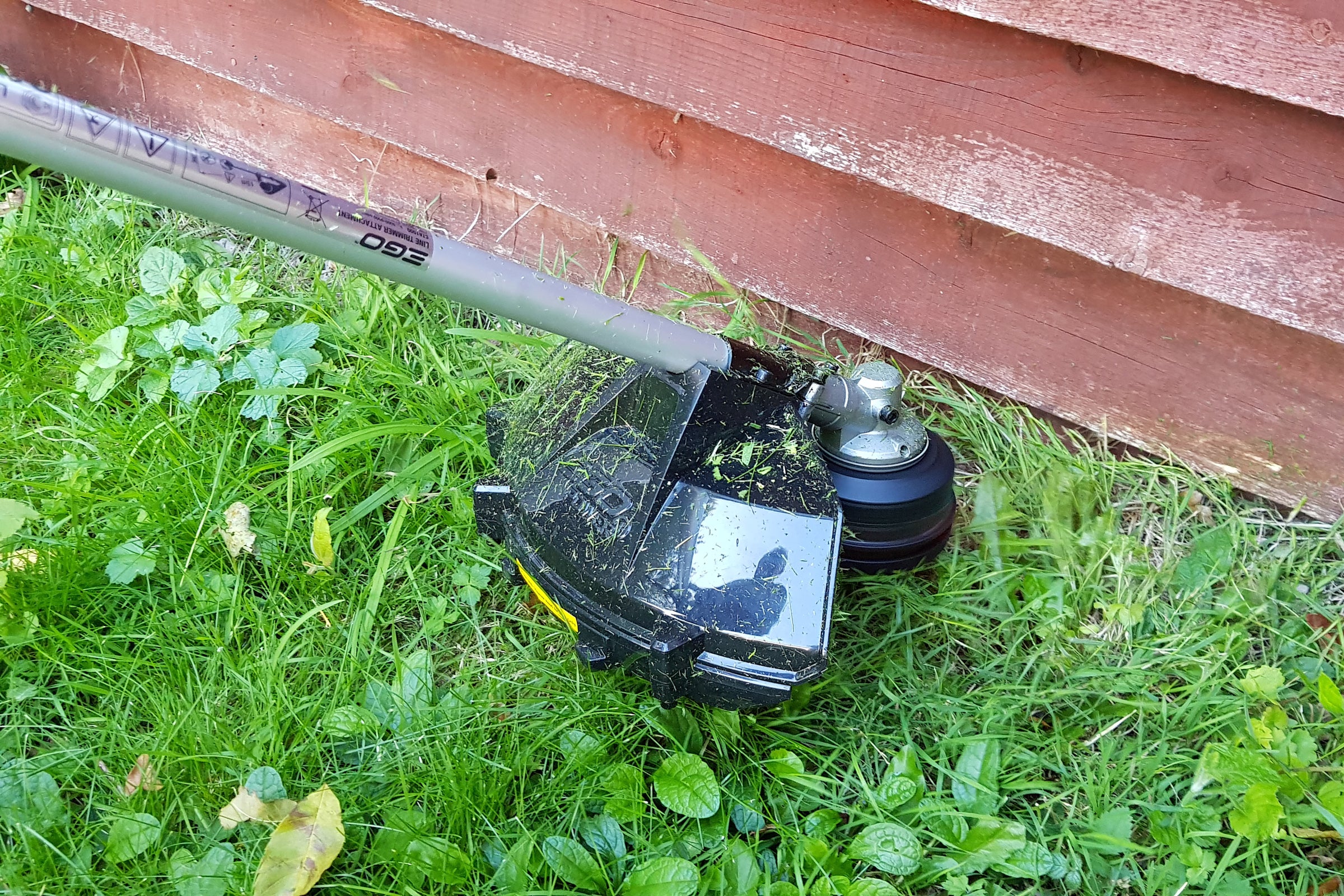 The brush cutter had no issues with thick bramble and small saplings up to about 20mm in diameter at ground level. The three-point bade is reversible, which is just as well as it dulled fairly quickly in heavy scrub and clipping the ground. The basic steel construction makes it butter-easy to sharpen on a grinding wheel though. Line trimming with the dinner-plate sized 38cm cutting radius clears a lot of grass in double quick time. The bump feed works well and EGO’s rapid reload feature means you can reload the spool with line without dismantling the head. We used a 2mm square profile cutting line to great effect and the EGO was easily the equal of our similarly sized petrol-powered model.

We finished using the lawn edging tool. It’s effective at cutting a crisp edge, chopping down vertically with hoe-like precision. Our lines were a bit wonky and we kicked up a fair bit of mud and stones, but we suspect that has more to do with a lack of formal garden expertise here at the farm. With outstanding runtimes, pro-level tools and decent length pole, the EGO Multi-Tool lives up to its billing of delivering petrol power without the fuss, fumes or noise. We would add running costs, servicing costs and environmental impact to that list of improvements too. It’s heavy and can be unwieldy, but the EGO Multi-Tool passed our tests with flying colours and benefits from an outstanding battery and charger combination all at a very appealing price. 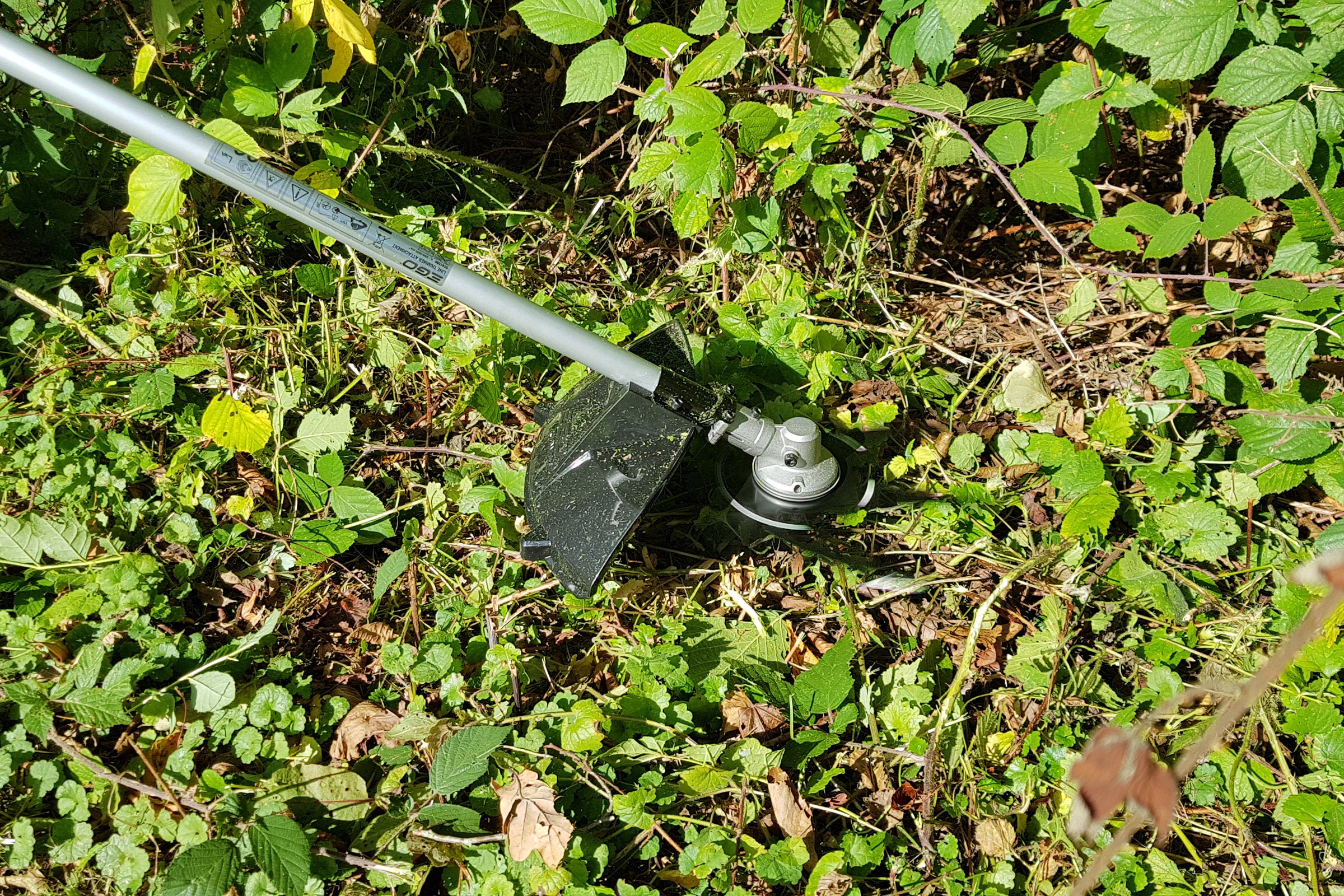