The three-stage initial set-up routine for the EE TV is simplicity itself, setting a great early tone for the EE TV’s wider operating system. The system even gets busy auto-tuning your TV channels as soon as it’s first switched on, so that you’ll likely find a message saying auto-tuning is already done by the time you reach that part of the install process.

After the channel tuning step, you are asked if you want to activate the box’s Replay feature with the difference it makes to your recording options (as discussed earlier) being clearly explained. It’s also great that the initial install lets you select how many hours you want Replay to run for, and which channels you want it to work with. 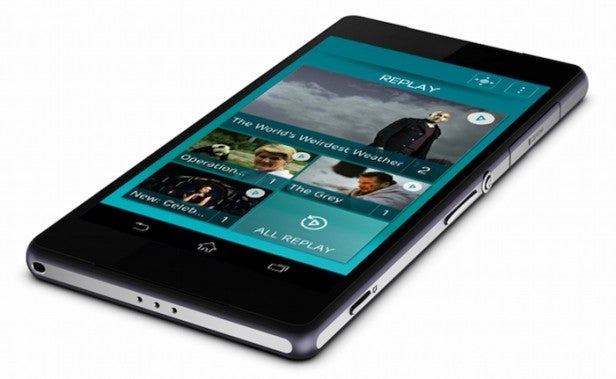 As a last welcome set-up touch, you can watch a short video running you through the key features of the EE TV interface.

The superb ease of use story continues with the partner app EE provides for iOS and Android devices. All you have to do to get it working is download it once your EE TV box is up and running, open it, let it auto scan for your EE TV box, and that’s it. The app automatically syncs with your box and mirrors its menus and content – recordings as well as live broadcasts. Excellent.

Despite their immense sophistication and graphical richness, the EE TV box’s menus run remarkably slickly and quickly, with minimal downloading delays, no sense of sluggishness as you navigate between menu screens, and no irritating delayed responses to your button presses. This applies equally to the in-box and in-app menus.

Also extremely impressive is how intuitive the system feels right out of the box. The excellent menus and remote control combined to ensure that we never once found ourselves confused about what we needed to do or where we needed to go to find the content we were after.

The system’s stability is outstanding too. Over many hours of use during which we routinely pushed the EE TV box to its limits it never crashed once or even suffered so much as a pause or glitch in its OS.

Nor does the EE TV box let you down with its performance. We suffered no buffering problems with any of the streaming apps, even with the slowest broadband we could find (3Mbps), and the box also does a great job of scaling its performance in response to changes in local loads on even slow broadband connections. 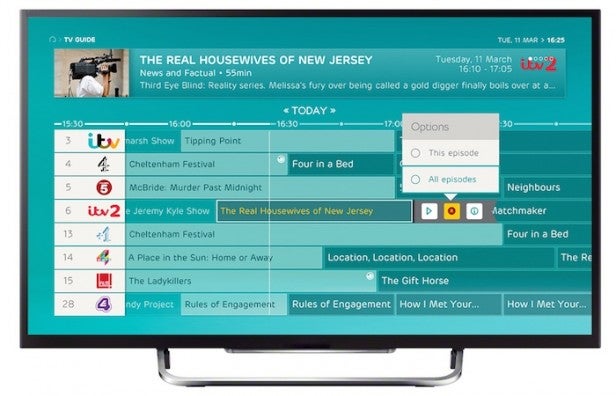 Streamed and Freeview pictures both emerge through the EE TV’s HDMIs looking clean and natural, revealing no serious shortcomings in the box’s digital decoders. Sound is pure and well rounded too.
If we were to be really picky we have seen slightly more crisp Freeview images, and we occasionally became aware of a tiny amount of lag between the video and the dialogue track – though if you have a fairly modern TV you may be able to eradicate this latter issue via your TV’s audio delay adjustment.

if you’re wondering how the EE TV’s recordings shape up, the simple answer is that they’re flawless. As you’d expect given that the box simply stores the incoming digital streams.

At first glance the remote control
supplied with the EE TV box doesn’t look anything special. But actually
it proves surprisingly effective, with a logical layout that shows a
good understanding of what direct access buttons you actually need and
where the onscreen menus can be more effective.
Having praised the
remote, though, you will likely still find yourself mostly operating the
EE TV box via its excellent companion tablet/phone app.

Should I buy an EE TV?

If
you are already an EE customer or, even better, you’re already thinking
of becoming one, then getting an EE TV box is a no-brainer really. It’s
certainly not one of those ‘giveaway’ boxes that will just clutter up
your kit rack and never get used. In fact, some of its features are so
handy that even people with Sky could find it a genuinely useful
addition to their system. 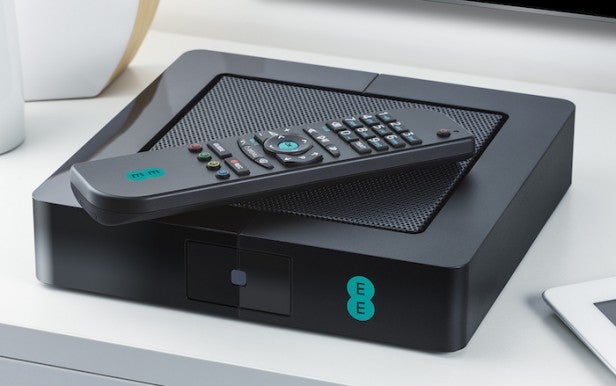 The
more pertinent question, at least where EE is concerned, is whether the
EE TV box is enough to potentially attract people to sign up for EE’s
broadband and mobile services. And actually, with its four tuners, huge
hard drive, Replay feature and support for so much multi-screen viewing
it really might be. At the very least it does enough to stand out from
the crowd, and that’s a big part of the battle these days.

There’s
undoubtedly room for improvement with EE TV. Its lack of some of the
UK’s biggest streaming services is one (hopefully addressable) issue,
and it would also have been great if EE could have rounded out its box’s
otherwise impressive flexibility by adding multimedia playback support
via either USB or your network – or both.

Still, it’s hard to be too churlish about a well thought-through box which brings genuine ambition and innovation to the table.