What is EE TV?

Available exclusively to EE customers, EE TV is the most concerted bid yet by a mobile phone company to get a foothold in your living room. It’s a set-top box carrying a Freeview HD tuner, Internet access, a startlingly large 1TB HDD for recording TV shows and a couple of genuinely welcome surprises up its sleeves. And in case you were wondering, we’re assured that the nascent EE/BT negotiations are nothing to worry about where EE TV is concerned!

The EE TV box is a bit of an oddity to look at. Its square footprint is impressively small for something carrying 1TB of storage, and there’s something quite attractive about the glossy black surround that runs around the edges and frames the top. However, the grilled finish of the top together with the utterly rudimentary green LED power light on the front give it a rather ‘laboratory’ feel – like something designed for scientists rather than AV enthusiasts. 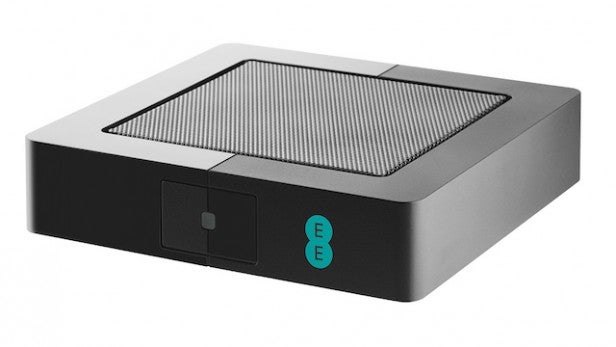 Connections on the rear are broadly as you’d expect. There’s an HDMI output that’s recommended as your TV connection of choice, plus there’s an RF loopthrough, an optical digital audio output for plugging into your AV receiver, a monitor output, a USB port and an Ethernet port – though the unit does also have Wi-Fi.

Unfortunately the USB port can’t be used for playing back multimedia files onto your TV, and we were also surprised to find that the EE TV’s network connections don’t support DLNA multimedia file streaming from networked devices. Given EE’s mobile heritage it would surely have made sense if you could access photos, videos and even music files stored on your mobile devices.

Before getting deeper into the EE TV’s actually very impressive feature list, let’s explore how much the EE TV box costs.

It’s marketed as being free to all EE mobile subscribers who sign up to an EE broadband plan. These plans start at £9.95 a month as a launch offer for EE mobile customers, with £15.75 line rental. That gets you EE TV – which EE reckons is worth £300 – plus unlimited broadband up to speeds of 17Mbs, and free weekend calls. The entry-level Fibre package with up to 38Mbps goes up to £19.95, while a ‘Fibre Plus’ package offering speeds of 76Mbps is £29.95 a month.

Obviously the most fundamental feature of the EE TV box is its ability to combine streamed and live broadcast content into one seamless experience. But it goes much further than that in its bid to expand your home entertainment options. 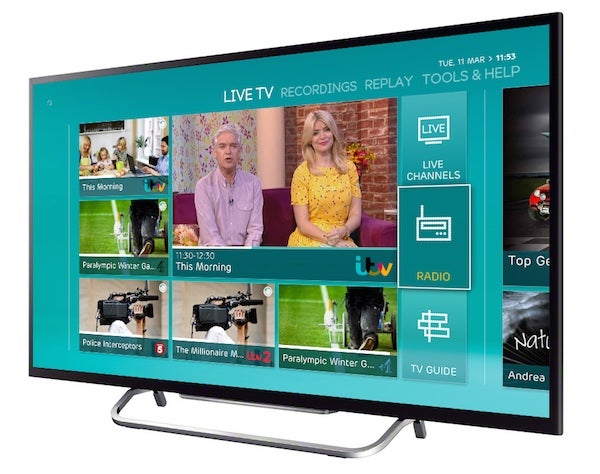 This ability for all members of a four-person household to watch a different shows at the same time fits perfectly with EE’s belief that TV viewing is becoming increasingly personal. While we retain some probably old fashioned concerns about this new way of further fracturing family life, we must say it’s a feature we used extensively during this review.

Having so many tuners – and such a big HDD – to play with also opens the door to perhaps the EE TV box’s most innovative features: Replay and Restart.

If you have the Replay feature active EE TV automatically records up to 24 hours of your favourite six channels, allowing you to instantly catch up on anything you may have missed. As for Restart, if you come in and find you’ve missed the first 10 minutes of something you’re interested in, Restart lets you simply rewind the show back to the beginning.

There are limitations to both Replay and Restart, it must be said. Perhaps the most disappointing is that Replay currently only works with standard definition channels. It’s easy to understand why this decision was made, as having six channels recording HD constantly for up to 24 hours could ultimately put some strain on your available memory even with 1TB to play with. But that doesn’t alter the painfully large gulf that exists between the quality of HD and standard definition broadcasts on the Freeview HD platform.

What’s more, if you activate Replay it uses up two of the four tuners, meaning you can only record or stream two channels simultaneously rather than four.

The Restart feature, meanwhile, only works for channels that share the broadcasting multiplexes of the six favourite channels you’ve selected.

Despite these limitations, though, both the Replay and Restart features address pretty successfully key problems of modern TV life not even touched on by rival boxes. 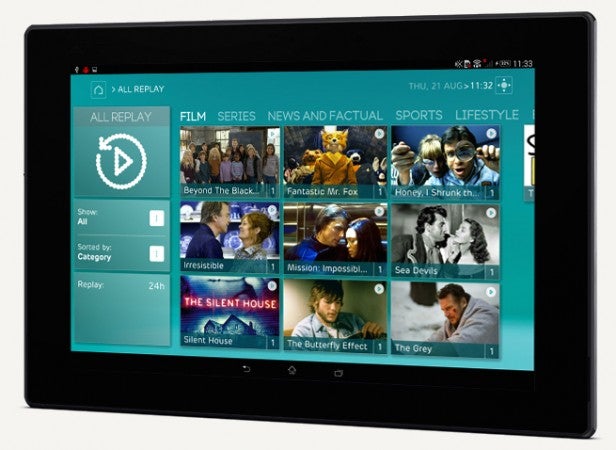 By the time you’ve added Restart and Replay content to the more standard recording and streaming features of the EE TV box you’ve clearly got a lot of content options for the EE TV interface to have to handle. But it actually handles everything pretty brilliantly.

The EE TV menus have more in common with smartphone or tablet apps than typical TV menus with their bold use of high resolution images and preference for graphics-laden tiles over boring text lists. And moving between content options is no more complicated than scrolling between On Demand, Live TV, Recordings, Replay and Tools & Help top menu options.

Under each header you get multiple windows showing highlighted or most recent content, plus a window through which you can access further options. And that’s it really. It takes just seconds to get to any menu you want and then find the content you want within each menu.

In the On Demand section, the highlight apps at the time of writing are YouTube, Wuaki.tv, the BBC iPlayer, Hopster, The Box Plus, Demand 5, BBC Sport, and Muzu. Going through the More Apps window brings up further links to Daily Motion, Energy NRJ, Deezer, The Weather Network, MeteoNews, Euronews, BBC News, Gemporia, CloudioTV,

It’s impossible to ignore the fact that this list doesn’t include Netflix, Amazon Instant, the ITV Player or 4OD – four of the UK’s biggest app hitters. Naturally EE can add more apps as they become available, and it was certainly hinted at the EE TV launch that Netflix at least isn’t a million miles away. But it’s a shame none of these four streaming stalwarts are there from the off.

Shifting to Live TV, you get a main window showing the currently viewed channel, with five more windows around it showing stills from whatever’s showing on BBC One, BBC Two, ITV, Channel 4 and Channel 5. It’s a pity, perhaps, that these secondary channels can’t be your ‘favourites’ rather than just the first five channels on the listings, but it’s still and effective form of presentation. Especially as shows available with the Restart feature appear with a little ‘rewind’ icon in them, while a white bar shows you how long each one has been running for.

Smaller icons on the right of the Live TV screen give you access to multiple pages of tiled lists of all the currently showing shows. Fortunately this rather impractical approach can be filtered down to HD channels; Restartable channels; or by genre.

There’s also a separate window to access digital radio channels on the Live TV screen, and finally you can access a full and more traditional TV Guide. This guide is notable for allowing you to scroll back as well as forwards (like Freetime) and for the way it includes icons indicating when a programme is available for Restart or Replay.

It’s worth adding here that if you’re watching TV and you hit the up button on the remote, you get an attractive scrollable list down the left of the screen showing everything that’s showing on every channel, giving you a handy surfing shortcut that causes minimal disruption to your viewing.

The Recordings menus is very straightforward, just using the same window approach to show the two most recent recordings in the top menu, with access to everything else through an All Recordings menu.

The Replay menu works almost identically to the Recordings one, with five of the currently Restartable shows appearing on the home screen and all the rest accessible via a ‘deeper’ window and presented in channel order.

We mentioned earlier that the EE TV menus resembled smartphone or tablet apps. So you may not be surprised to learn that there’s a companion app for iOS and Android that almost mirrors the menus on the EE TV box and lets you access all of its features without you having to interrupt viewing on the main TV. The app even communicates with the EE TV box to sync recordings and settings.

You can also, of course, choose to watch a recording or live TV show on the smart device you’re using without changing what’s showing on the main TV.

The companion app is so intuitive and the functionality it makes possible so varied thanks to the EE TV box’s four tuners and huge HDD that it joins the Replay and Restart features in setting EE TV apart from – and above – the majority of rival devices. It’s just a pity such a superb smart interface couldn’t also run to allowing you to send your smart devices’ multimedia content through EE TV to your TV screen.

Next
Setup and Performance Review