What is the EE Harrier Mini?

The EE Harrier Mini is the Android phone follow-up to the excellent EE Kestrel and smaller sibling to the 5.2-inch EE Harrier. Just like last year’s handset, the 4.7-inch Mini offers an almost vanilla Android experience and fast connectivity all for an £100 SIM-free price.

It’s a phone designed to give a high-end feel without costing hundreds of pounds, but it also has some decent specs as well. There’s a quad-core processor powering the Harrier Mini, similar to the one in the Moto E (2015) and the Windows Phone-running Lumia 640. Both of those phones reviewed well. It also has an 8-megapixel camera and a 720p HD display, so it holds up pretty well against the competition, at least on paper.

Some may be put off because it’s a carrier-branded phone, but the Harrier Mini is manufactured by consumer electronics outfit BenQ, a company that’s been making phones for over a decade. If you’re looking for a first smartphone or need a capable device on a budget, the Harrier Mini is positioned among some of the best in the sub-£100 category. But does it hold up well to scrutiny? Let’s take a look. 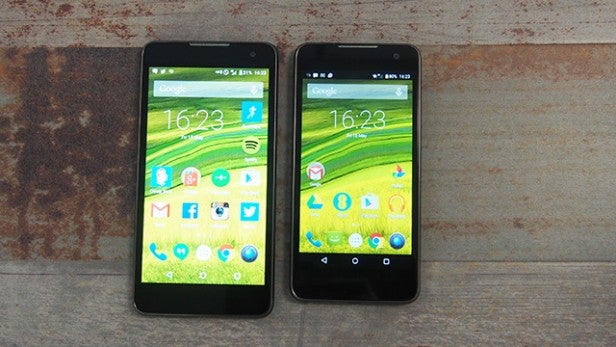 EE Harrier (left) next to the EE Harrier Mini (right)

If you’ve already read our Harrier review, then much of the same applies here. The Mini is by no means as ugly as some of the phones at this price point. Its design is basic and predominantly plastic with a removable back that features a very prominent, deep grey brushed-metal effect finish. The back has a slight curve offering a more ergonomic grip and generally feels like a nice phone to hold and use. At 9.5mm thick it’s not super slim like the Galaxy S6 or iPhone 6, but it does mean it’s not chunky as a first gen Moto G (11mm). Weighing in at 124g, it is light and should give you no problems using one-handed for long periods.

Behind the removable back, there’s good news and bad news. The good is that alongside the micro SIM card slot, there’s also a micro SD card slot giving you the option to expand beyond the 8GB internal memory. The bad is that for those who care about it. you can’t take out the battery. If you run out of battery, you can always invest in one of those EE Power Bars of course.

Up front, things begin to feel more like the cheap Android phones we’re more used to seeing. There’s a slim black bezel down the sides of the screen with some pretty chunky ones above and below eating up potential screen estate. It makes less sense that there’s so much bezel when you realise that the extra space is not even reserved or a set of physical or capacitive touch buttons. Up top at least you do get room for one of the phone’s two speakers. The other sits around the back and is surprsingly loud with good clarity even cranked up to the max. Something we’re not great fans of either is the power button on the left and volume rockers on the right-hand sides of the phone. While they’re nicely positioned to reach, they don’t push in convincingly enough

But it’s obvious these little bones of contention are the result of economic manufacturing. It is a budget phone after all, so the trade-off between function and form isn’t a deal breaker. It’s a very light phone and is comfortable to use one-handed, which is the most important thing.

The Harrier Mini benefits from the EE WiFi Calling service that allows you to send and receive texts and calls even when you have no network signal, provided that you’re connected to a WiFi network. For some people who live in areas where signal is a big issue, this may be an advantage over many of the other options in the affordable phone category. 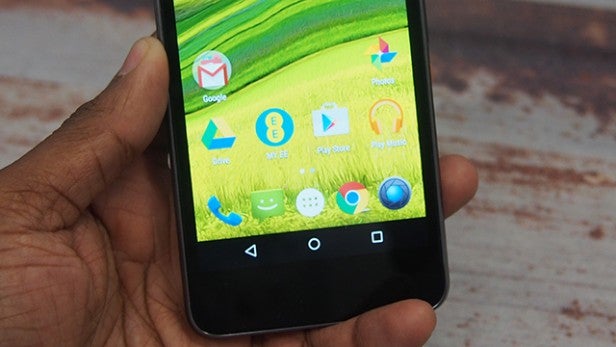 While the big Harrier gets a Full HD screen, the Mini has to make do with a 4.7-inch 720p HD one instead. When you consider this is an £100 phone, that’s still pretty impressive. The similarly priced Moto E 2 in comparison only has a 960 x 540 resolution screen.

What the screen lacks in exceptional brightness, it makes up for with impressive sharpness. Icons look well defined on the Harrier Mini’s display and text is easy to read at default sizes. The colours produced by the phone are somewhat muted and flat, lacking any real punch. But that said, pictures and video content still look decent enough and deliver better clarity than the majority of the phones at this price point.

The viewing angles aren’t particularly great with the Harrier Mini, though – unless viewed straight on, the screen looks as if the brightness has been dropped to zero. But perhaps this is a feature benefit if you don’t appreciate nosy people reading your messages during the commute.