What is the EE Bright Box 2 router?

The follow up to Everything Everywhere’s original fixed line broadband router is an important product. It is the first ISP-supplied router in the UK to offer 802.11ac and it earns extra brownie points by integrating a VDSL2 modem. This means in a single device that has compatibility with both the fastest DSL fibre broadband and wireless standards. Hopefully it will inspire rival ISPs to follow suit. 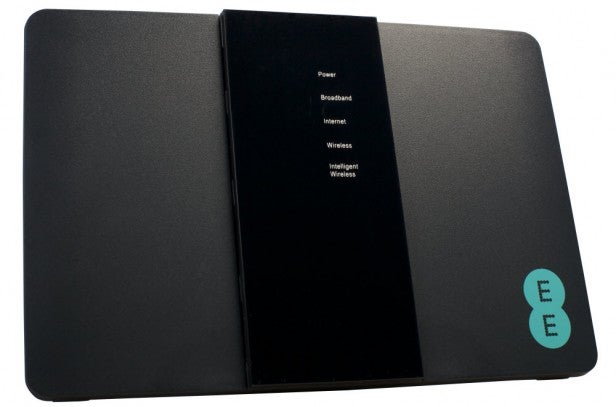 EE called in networking specialist Arcadyan to build the Bright Box 2 and the Taiwanese company has done a good job. Like an increasing number of wireless ac routers, it sits upright and from the front it looks subtle and stylish.

The banded design certainly takes a leaf out of Linksys’ book, but this is no bad thing and the primarily matt finish resists dust and fingerprints. The back is less successful and we’re not fans of the separate snap-in stand. Without it the router would fall over couldn’t stay upright and it looks like a picture frame with it fitted. Given the stand is detachable we’re also disappointed the Bright Box 2 doesn’t have the option to wall mount.

Lastly a note of caution to Firefox users: read about the Bright Box 2 online and you might think it has the option of coming in bright pink. Sadly the various forum posts about this are misguided with EE confirming a formatting error for the manual’s PDF when viewed in Firefox results in the crazy colouring. You can check this out in our gallery (link above). Whether you think a pink Bright Box 2 is a good thing or not, we’ll leave up to you. 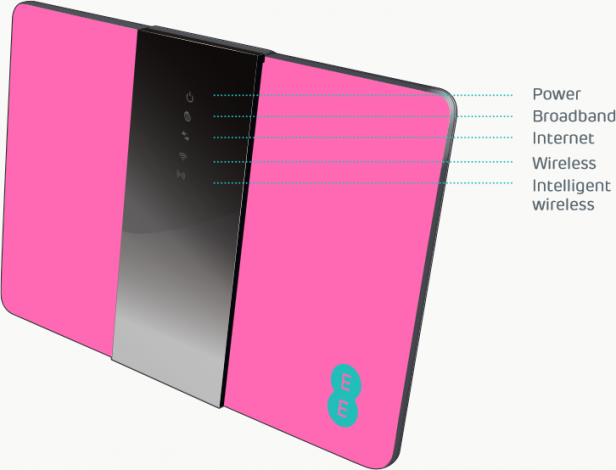 Of far greater importance, however, is what the Bright Box 2 can do. The standout feature is its 802.11ac wireless connectivity (backwards compatible with 802.11abgn) and EE gets brownie points for including Beamforming.

We do spot an immediate area of concern, however, and that is the router’s 2×2 antenna array. 3×3 arrays are common in most premium wireless ac routers and cutting back tends not to affect short range performance, but the weaker signal they produce causes problems at range that even Beamforming cannot fix. Most notably we saw this hobble the otherwise excellent Asus RT-AC56U, the company’s budget 802.11ac offering.

Despite this, the Bright Box 2 also comes with another significant feather in its cap: an integrated VDSL2 modem. We’ve been banging on at ISPs to combine this with 802.11ac for some time, but all DSL providers so far supply a separate VDSL2 modem and dedicated router to cut costs. By not doing this EE has a single box solution for the fastest fibre optic broadband and latest wireless technology.

The problem is once we look beyond the router’s two headline features cracks aside from the 2×2 antennas start to emerge. The most disappointing is the Bright Box 2 has just a single Gigabit Ethernet port with the remaining trio being outdated (and now misnamed) 10/100 ‘Fast Ethernet’.

We thought the days of Fast Ethernet were dwindling so to see an ISP carry it over to their flagship wireless ac router is highly disappointing. All wireless ac third party routers use only Gigabit Ethernet and for users with demanding local networks this will be a deal breaker.

The Bright Box 2 also has just a single USB 2.0 port rather than the dual configurations that are now widespread and which often incorporate USB 3.0. Happily basics like WPA/WPA2 and WPS security protocols are aboard, but WPS is referred to as ‘Intelligent wireless’ which is daft because it messes with a standard industry term. In fact it doesn’t even accurately describe a feature simply lets to connect to a network without a password for a short period of time.

Finally, the Bright Box 2 doesn’t have any Cloud credentials so there’s no remote access to router settings (like Linksys’ Smart WiFi or D-Link’s MyDlink) or media (like Asus’ AiCloud). Cloud access to your local network is a love/hate feature for some, but for us its usefulness outweighs security concerns so its omission is a shame. 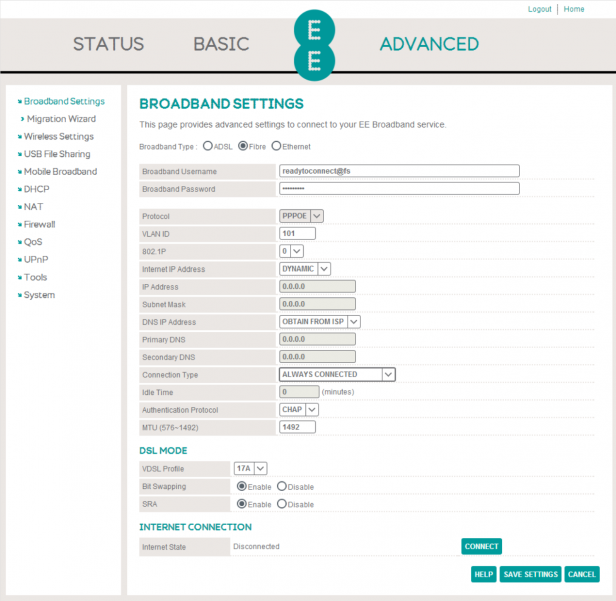 Setting the Bright Box 2 up isn’t quite as straightforward as you might expect for an ISP-supplied router. The good news is, like an increasing number of modern rivals, it is CD-free. EE has also preconfigured the VDSL2 modem for its network as you would expect.

Where it leaves a little to be desired are the unnecessarily messy SSIDs (ours was ‘EE-p9ba3b’), but at least EE includes ‘5GHz’ to indicate which is the faster network and can be changed. Passwords are also pre-picked, which is a little old fashioned when the modern trend is to set your passwords on first connection. At least EE does include a credit card sized information sheet with your wireless name and password.

If you want to make changes you’ll find the Bright Box 2 admin UI is similarly old fashioned. It is has Basic and Advanced modes, but both are entirely text based with none of the smart graphical design or drag and drop functionality that would keep Linksys’ industry benchmark ‘Smart WiFi’ up at night. Still, there are options galore and EE hasn’t locked down any of the settings for which it deserves credit.